The forecast for Saturday wasn't very good where I was in Grantown so I'd already decided to spend the day fishing. However, I made the mistake of sitting down to watch Sky News (yes - I know!) and the weather forecast at 8 am for the far north west was looking pretty good, so I changed my plans and headed off north towards Inverness and then (as it was looking fairly clear) off towards Ullapool and then along towards Dundonnell as An Teallach beckoned in the distance.

I parked at Corrie Hallie and set off up and the track heading south into Fisherfield after 10.30 am. After about 3 km I came to the twin cairned turn off path to the right that goes to Shenevall bothy, and could just see my target for the day - Beinn Dearg Mor - peeking round the side of An Teallach.

Unfortunately I hadn't studied the walk in too closely on the map, and to my dismay I realised as I trudged along that I was losing all the height that I had made from the car as I descended down into Strath na Sealga and to Shevenall Bothy. The thought of having to ascend and then descent this 300m on my way back was not inviting. Still - the Deargs looked stunning if rather far away still. The Deargs come into view

I popped my head into Shenavall bothy but as it was about noon there was nobody about - all enjoying the rather excellent weather up a hill no doubt. I had a look inside and it seemed fairly clean and hospitable and there had obviously been some recent refurbishment of stairs and the upstairs sleeping area. I left and trudged on and looked for a good spot to cross the river which was easy enough as it was running fairly low. The SMC guidebook says that you have then to cross a mile of fairly wet bog and - boy - it wasn't lying. There were tracks of sort through the bog and I only came up against a real obstacle which meant back-tracking twice, but it was squelchy stuff I would hate to try and do this on a wet October day. Not an enjoyable part of the day at all.

Once across the second river and after a sandwich at Larachantivore, I followed the path south alongside the river for a bit and then headed up the east ridge of Beinn Dearg Mor. I was aiming for the hanging corrie, but missed it and came out on its north side after a scramble up the hill side and between a gap in the cliffs. In retrospect it would be better to stay on the path a bit longer until it turns west up the Gleann na Muice Beag and head up the hill side due north to the hanging corrie. 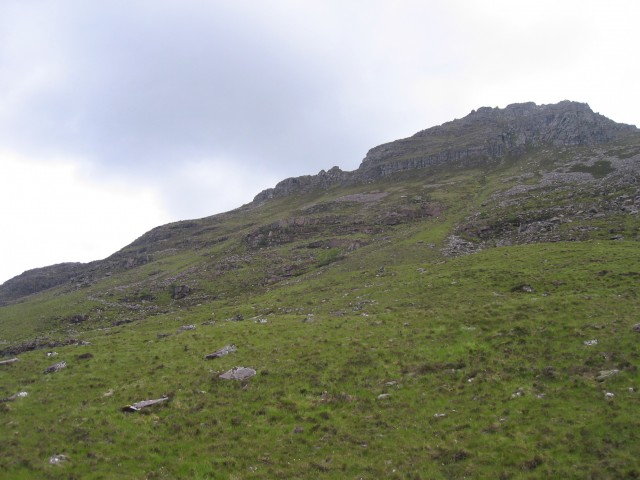 Looking up toward the summit

When I did eventually get to the summit (4 hours after leaving the car) it was clear why this is such a highly thought of hill. The views all round are immense and it would be a crime to do this hill on a misty day. Luckily this wasn't a cloudy day and I enjoyed a 10 minute lunch stop by the cairn drinking in the viewds before heading off to do Beinn Dearg Bheag. There's a small cairn off the top of Beinn Dearg Mor marking the route down to the bealach but it is still a pretty steep descent and I was glad to have my sticks with me for extra purchase. Beinn Dearg beag from the summit

At the bealach between the two hills I bumped into the only other climber I met that day - he had cycled in from the north (just like Foggieclimber in his excellent walk report ) and I have to think that he made a better choice of route than I did. I left him to carry on his walk and scrambled up the rocky but straightforward south ridge of Beinn Dearg Beag to the top. This is almost a better viewpoint than its neigbour and gave excellent uninterrupted views out to sea and all round. Looking north from the summit

The view of An Teallach from here is particularly fine. I found a big white fluffy eagle feather on top plus a few pellets so I'm obviously not the only one who knows a good viewpoint. Debating the best route down I chickened out of a direct descent east and went south back to the bealach before heading east into the corrie with Loch Toll and Lochain in it. I stayed on the north side and found the walking fairly straightforward, although after the corrie the descent and walk down to the side of Loch na Sealga is a bit rough. I followed the track alongside the loch for a bit and then looked for a spot to cross the Abhainn Strath na Sealga. No obvious stepping stones so socks off and a quick splash across was the answer. Having goretex socks is great as you can keep your feet relatively dry even if you get the insides of your boots wet and wading across bare-foot is just far too painful in my experience.

Having crossed the river I was now facing a kilometre of bog between me and Shenavall bothy. It didn't look too bad and largely wasn't but a few drainage ditches meant I ended up leaping across and hoping for a good landing a couple of times. I made the mistake of using my walking pole to attempt a mini pole vault - but only succeeded in bending the middle section so badly it snapped. This was proving to be an expensive trip.

I finally got back to Shenavall and there was a bit more activity and people moving about than before. A few other local inhabitants were also hanging around, and seemed fairly unphased as I took their pictures. The re-ascent of the track out from Shenevall was a bit of a trudge , especially with only the one walking pole, and seemed to take a lot longer than it did coming in. I met a few folks who were walking in to stay at Shenavall and I wished them well and told them the midges didn't seem to be biting, which cheered them up no end. The final 3km down the track to the car was pleasant enough, but did make me think that a bike would have saved me some time. As it was I got back about 9 hours after setting off on what turned out to be a very long day.

In retrospect I don't think this is the best way to do these 2 hills and if I was to come back I'd come in and camp for a few days, or do them as a day trip from the north. The approach from the north east via Shenevall is a real slog (esp the bog crossing twice) and the extra 600m of ascent and descent to get into and out of Strath na Sealga is hard work at the start and end of the day.

Munro bagging was never this hard !

Thats a good walk JohnGG. I know what you mean about the bogs near Shenavil and the walk back out . Crossing the burns wasn't too bad when i was there. The Corbetts looked very impressive and one day i will go back. Did you take any photos?

Have posted a few pictures from my trip now. The scenery in this part of the world is amazing - and even better when the midges are not biting !

Is there even an easy way to these hills? Beinn Dearg Mhor is probably one of my favourite summits ever though, and Beinn Dearg Bheag has a fun NW ridge which catches you unawares if you weren't paying full attention to the map

Did these from Gruinard, but would definitely repeat them one day, possibly from this direction next time. Nice report

Just having a quick look through your Corbett map, and you seem to have left all the awkward/distant ones to the end!

"Just having a quick look through your Corbett map, and you seem to have left all the awkward/distant ones to the end!"

Yes - I am realising that now. Part of the problem is that I am not a great one for camping out, which means most of my corbetts have been done as day trips out of Dundee or Grantown, or I have planned holidays in the right area. I've left Knoydart and the island corbetts to the end as they involve major planning and I am also determined not to do these last few hills in miserable conditions simply to tick them off (I had enough of that doing the munros !) so only attempt them if the forecast is OK/Good.

If we ever yet a decent summer I plan a few long weekends and short breaks to polish the remaining ones off - but am in no hurry. Each one is an adventure now, and a well earned "tick". If I get despearate I may end up wild camping, but not if there's a nice B&B and a hot bath close by ....

I walked past these after doing An Teallach - they look amazing. Another example of many of the Corbetts being more majestic.

Just found this report and longing for spring to come to visit again this wonderful area. Your spot on about cycling in and out and what I plan to do.

lochlaggan wrote:Just found this report and longing for spring to come to visit again this wonderful area. Your spot on about cycling in and out and what I plan to do.

I would definitely recommend the Gruinard aprroach for these two: less height gain and much easier river crossings. The NW ridge of Beinn Dearg Beag has some fun bits of scrambling. You can cycle as far as Loch na Sealga on a fairly good track.