By Fiona Anderson
Having met up with our mountain leader Lucy Wallace on Ben Lomond a few weeks ago, it was now time for another practice walk with Dad as well as meet up with another member of our team for the walk on Ben Nevis.

Phil Turner is an outdoor writer, specialising in lightweight backpacking (http://lightweightoutdoors.com/) We connected with him via Twitter @philoutdoors and were looking forward to meeting him “in real life”.
We were also joined by local walker Felicity Martin another outdoor enthusiast and freelance writer/photographer (http://www.felicitymartin.co.uk/) and fellow Tweeter @FelicityM.

In stark contrast to the walk on Ben Lomond, we started our walk in unfamiliarly warm weather! Thankfully, the midges were also noticeably absent!

Ben Chonzie is sometimes described as a ‘simple’or uncharitably ‘boring’ Munro.
We certainly did not think so….the surroundings were bathed in sunshine. As we gained altitude, the perspectives changed and the surrounding peaks and valley of Glenlednock below provided much scope for stopping to try and describe the vistas to Dad aka as have a breather!
He has a remarkable grasp of geography and sense of direction and occasionally even I doubted he was blind as he asked very relevant questions about what we could see in front of us and where various landmarks such as Ben Vorlich, Schiehallion and Loch Turret were in relation to our position on the mountain!
We all got into our stride quite quickly which was reassuring as on previous walks it has taken us a bit of time to establish a ‘rhythm’ or pattern of walking/guiding. Obviously, all our practice is paying off and this bodes well for Ben Nevis in July.
The path is fairly straightforward (relatively speaking!!) and was helped by the absence of cross-drains which on the Ben Lomond walk considerably broke our rhythm and takes a little extra time to navigate. However, the ground underfoot was extremely uneven and changed from loose rock, to embedded rock which required Dad to adjust his pace and how he steps on it.
We have developed a ‘glossary’ of terms for Dad, which evolved partly out of a joke but also out of a necessity to describe terrain quickly in a word or two. So we have “lumpy-bumpy” which refers to large, embedded rocks in the path, requiring Dad to step on or over large rocks and “knobbly-wobbly” which refers to smaller rocks on the path which are usually loose and therefore Dad might be at more risk of losing his footing.
We made good progress and after some time observing how Nina and I guide Dad, both Phil and Felicity took their turns in guiding Dad.
This went very well although Dad sometimes needs to stop talking and asking questions and actually listen to the guidance being given him!!
Before reaching the bealach, we broke off and took a more direct path up to the summit plateau.
This markedly increased the gradient we were walking on, but Dad coped extremely well.
Phil walked behind him on the narrow sections of path as the person who is guiding Dad is leading him forward, but cannot see where his feet are going. On a narrow path, Dad sometimes steps a little too far to the right or left, and where there is a drop, that’s not such a good idea!
The other thing Dad does is take much bigger steps than he has to. So we would say "move your foot forward about a foot" and Dad would start move long before we had finished relaying the instruction. Not only that he would actually bypass the step we were trying to guide him onto and end up about a foot or more ahead of where we wanted him!
This led to the creation of a new nickname for Dad – “Hardcore Anderson”.
Many thanks to Phil for this inspired and DEEPLY accurate appellation!

The top of Ben Chonzie is a fairly flat plateau but the rockiness underfoot continues and so there is no let up in the degree of concentration required when guiding Dad. We made the summit and Dad was deeply disappointed at the lack of a ‘trig’ point but enjoyed a coffee and lunch in the summit shelter.
We decided to come down via the bealach to add a little variety, but also to decrease the gradient of the descent a little bit. The descent went very smoothly, Dad avoiding troughs in the heather and all the lumpy-bumps & knobbly-wobbles.
One thing Nina & I commented on from this walk that we will put into place on Ben Nevis is that we need to change guides for Dad more regularly. It’s fine going up, you are fresh and concentration is quite easy and it is tempting to keep going when you don’t feel particularly ‘fatigued’.
However, we’ll be on Ben Nevis for around 18 hours, so the max time guiding will be 30 minutes to ensure that we keep fresh and focussed on Dad’s ‘hardcore’ feet!

All told, it was a wonderful, sociable day out on the mountain. Phil and Felicity were absolute stars and we rounded the day up with a couple of drinks in the Royal hotel bar in Comrie followed by a Haggis & Chip supper in the car... perfect! 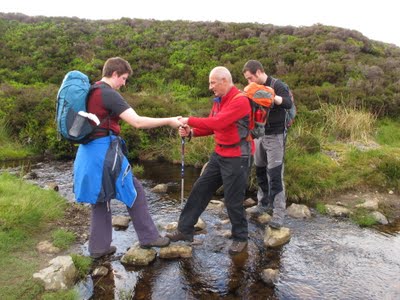 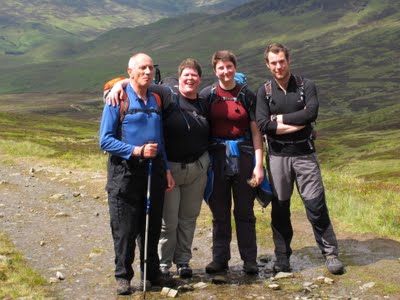 Michael, Nina, Fiona and Phil taking in the sights 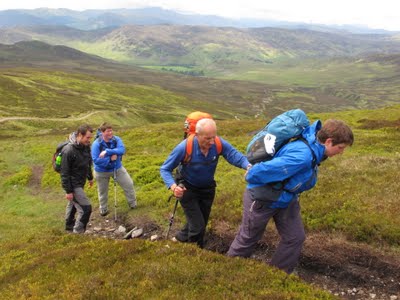 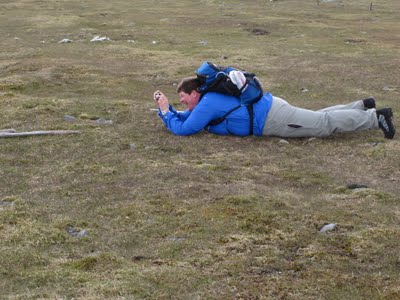 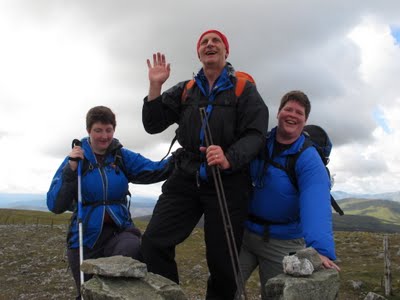 Fiona, Michael and Nina at the summit of Ben Chonzie 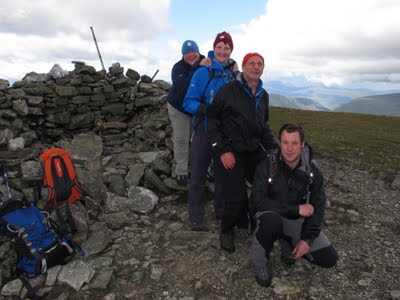 Nina, Fiona, Michael and Phil at the summit 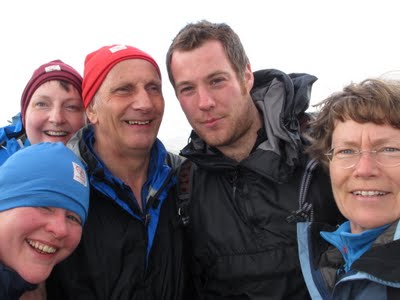 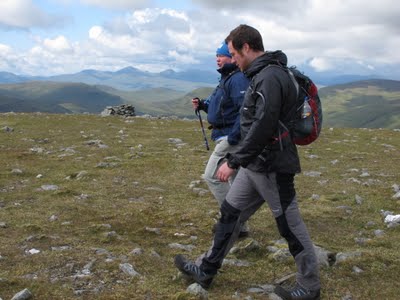 All the above photos were taken by Felicity Martin and she has kindly given permission for us to use them.

For more information and to see a video of Dads journey so far, please go to http://walkingwithfatty.blogspot.com/
[youtube]http://www.youtube.com/watch?v=SK4SqaahJ2M[/youtube]