A classic circuit of some of Wales’s highest mountains, on a day when the Carneddau stayed mercifully free of the bad weather that seemed to be catching everywhere else around.

our_route.gpx Open full screen  NB: Walkhighlands is not responsible for the accuracy of gpx files in users posts
From the A5, there’s a decent path up by the Afon Lloer to the foot of Pen yr Ole Wen’s east ridge, picking a stony route through some quite boggy ground. The real hard work of the day starts after that, climbing rapidly up a fairly clear scrambling way through the steep rocks – there’s one quite tricky gully early on, needing a big upward stride, but nothing very technical after that. The shaley path to the very top after the climbing goes on a little longer than you might imagine, but – as with most of this route – on a clear day there are terrific views, especially of the Glyderau and Tryfan very close by, to distract you. From Pen yr Ole Wen, the route for the next few miles is much gentler, easily undulating ridge-walking over rocky but well-pathed ground. All green disappears on the climb over the 1000m mark to Carnedd Dafydd though, where the pale loose stone has rather a ‘moonscape’ feel. After the bouldery and fairly narrow ridge to the slopes of Carnedd Llewelyn (bypass to the right for easier but less interesting walking), a surprisingly clear path contours round the grassy west side of the mountain to end near to the col between there and Yr Elen. This looks a much better route to that outlying peak (a nice curving spur with steep cliffs to the right and wide views to the western Carneddau and the sea) than descending from Carnedd Llewelyn down rather a steep and loose scree path. The main 1064m peak afterwards is a bit of a rounded lump on top, but there’s an airy feeling of top-of-the-world satisfaction (and, this Sunday, solitude too) in wandering around such high land. 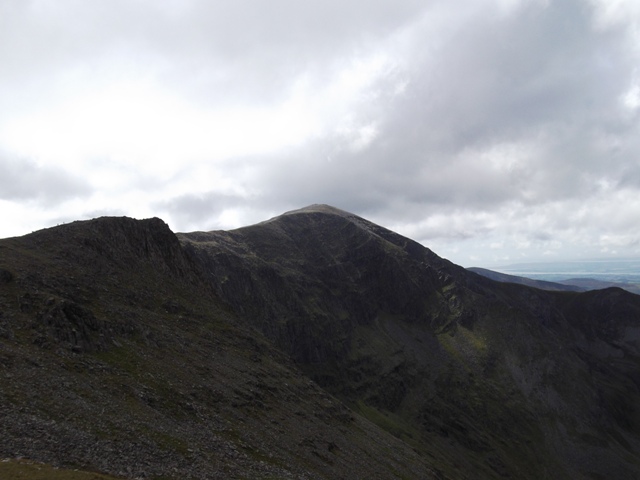 Looking back to Carnedd Dafydd The path quickly narrows between here and Pen yr Helgi Du, dropping steeply down at the end (quite difficult scrambling over one short stretch) to the impressive Bwlch Eryl Farchog ridge and then up a short and interesting scramble-path to the flat summit. Although narrow and quite close to some steep drops, this never feels at all exposed, and is a lovely quick climb. A clear and easily-graded grassy path sets off south down the Y Braich ridge, making for a good descent from the high ground with some wonderful views to Llyn Ogwen surrounded by towering peaks, although the mapped route through the farmland beneath is a very marshy splashing walk indeed – there may well be a better way than this back to the A5. It’s easy walking after that though for a mile or so down either the road or the track to the south back to the foot of Pen yr Ole Wen to end – especially if you are lucky as this with the weather – a really spectacular mountain day. Pen yr Ole Wen from south of the road

That looks a beautiful walk and a great day out, some absolutely stunning views from numerous points along the way - great choice poppiesrara, even if there was a bit of marshy splashing

Terrific views, indeed! Wow, endless sky...very beautiful!! I must admit my ignorance of Welsh topography. I had no idea there were hills of this kind. Really gorgeous, poppiesrara!

Done this many times, and would happily do it again.

Excellent pictures and a much more palatable route up Pen-yr-Ole-Wen than the slog up from Ogwen.

Thanks, everyone! Really got pretty lucky - plenty of other people seem to only see these, Carnedd Llewelyn especially, through the mist...

'ND' - I can't pretend that all Welsh hills look like this... (I guess most of them perhaps are rounder and greener - still some great ones among those too though). But some definitely do!

Excellent report, and some great photos. Really looking forward to doing the two Carnedd's this weekend now. If only we can have views like you had. My fingers are crossed. Good stuff.

This looks a brilliant walk and one I'd like to do. I have found it's graded from moderate to hard. I'm an experienced hill walker and have walked the highest peaks in the uk but my most ambitious scramble is Helvellyn, striding edge, which I would say is my limit for a scramble. Would you say the scrambling in this walk is comparable or more technical? Would appreciate your feedback, thanks.

Polkadot wrote:This looks a brilliant walk and one I'd like to do. I have found it's graded from moderate to hard. I'm an experienced hill walker and have walked the highest peaks in the uk but my most ambitious scramble is Helvellyn, striding edge, which I would say is my limit for a scramble. Would you say the scrambling in this walk is comparable or more technical? Would appreciate your feedback, thanks.

I've done this route a few times although I have always omitted Pen-yr-Helgi Du. It is much easier than Striding Edge. the way up Pen Yr Ole Wen is a broad ridge. There is one slabby rock step needing a high stride, but it is not in an exposed place and feels totally safe compared to Striding Edge.

After that, it is a just a walk for the next few miles. There are a few spots where you can venture out onto the top of cliffs for some sensational views, but they are totally optional (and don't involve any scrambling).

There is a steeper rocky bit on the descent to the Bwlch Eryl Farchog, but again it is much easier and less exposed than Striding Edge. After than there is track down to the lake and a good track back to the road. If you wanted to add the scramble up Pen yr-Helgi Du, that does not look tricky either, just a bit of interesting clambering.

The Carneddau are among my favourite hills, they have a sense of space and remoteness, and wonderful views south to the other peaks, and north to the sea and Anglesey. On one occasion I could see the Lakeland summits from the top of Carnedd Llywelyn!

Hi Polkadot, this seems a long time ago!

Agree with HalfMan, the scrambling wouldn't be harder than anything on Striding Edge, there's much less, and there's definitely nowhere near the exposure. In terms of 'grading' it hard though, do bear in mind that it's a longer walk and with quite a lot of ascent, some fitness needed.

The short step up climbing Pen yr Ole Wen and the one down to Bwlch Eryl Farchog are similar - long strides without too much handhold but very brief and no danger - akin to the 'chimney' down off Striding Edge but not nearly as long or hard. I'd recommend including Pen yr Helgi Du if the energy's there, it's only a short climb, but you can leave choosing whether to do so until the last minute and if not head down past the reservoir - that's a fairly similar nature of climb to the one from the end of S Edge onto the Helvellyn plateau but shorter and definitely nicer, less eroded.

Good mountains with great views, enjoy it if you go.

Thank you so much for your replies, you have given me the exact information I was looking for and with that I will definitely be doing the walk in September. Watch this space 😊🚶🏻‍♀️

ndhudson wrote:Terrific views, indeed! Wow, endless sky...very beautiful!! I must admit my ignorance of Welsh topography. I had no idea there were hills of this kind. Really gorgeous, poppiesrara!

This is also an excellent route to savour in winter. I did it back in 2014 and it stands out as the best winter day i’ve Enjoyed in N.wales