05/08/2009, 11 pm : took off with my friends Alex and Mark the little burgundy bus from Ullapool, dropped off at Ledmore Junction, in middle of nowhere, in center of beauty. Never heard of Munros, Grahams or so, just saw this great and a bit scary sandcastle named Suilven on the web, before our departure from France.
Our old dream of Highlands was already fully satisfied. Good august weather, a parade of tourists in motorhomes on A835.
Our plan was to go further in wild countryside. We dared to bath in Cam Loch, fearing a possible legendary monster. We entered deeper in wildness to Lochan Fada, dived in the bog out of the main path.
The scramble was relatively easy to the bealach of Suilven, after having dropped our rucksacks near of Loch a'Choire Dhuibh.
Great view there. Alex felt vertigo on the Bealach, and believed the further way was too risky for him and stopped, sitting between two rocks of the odd wall of the Bealach. Today, he still regrets not having followed us to the western summit.
This way is actually not risky at all (eastern summit seems more unreachable... say if i'm wrong for those who went there!).
The best feeling ever on Caisteal Liath : full panorama on sea, on Wester Ross, Canisp, Ben More Assynt, Cul Mor and the entire Ullapool's family. And the silence.
I found the descent pretty fun, doing little jumps. We heard the thunder as we found back our rucksacks. The sky seemed angry and violent. Rain fell furiously over us, we reached the Suileag Bothy at 6 pm, and were relieved to found it open and welcoming.
We made our stuff dry and had a good night, before reaching Lochinver's pubs on early noon the next day. Great walk ! Bus service exists between Ullapool and Lochinver, if you want to make this walk.
Excuse my english and enjoy this jewel ! 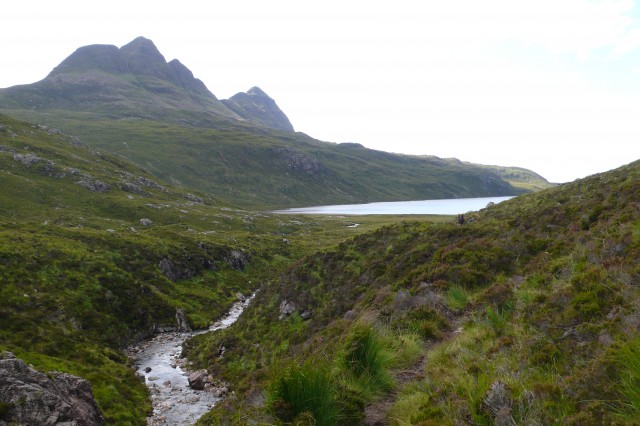 Mark and me, just enjoying the view on Caisteal Liath 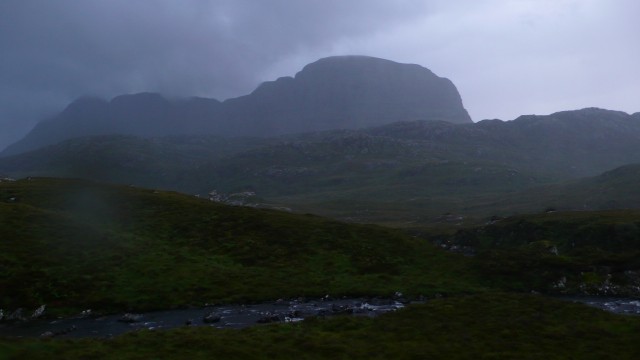 
Suilven.gpx Open full screen  NB: Walkhighlands is not responsible for the accuracy of gpx files in users posts

Great way to do this hill... I might just copy it

no problems with your English and I did enjoy

Always fancied this walk, looked at the little brown sign-post on many occasions

Will be up there again in the very near future, so I might take the dogs a nice little walk