I did this walk more or less to the described route taking Meall a'Chrasgaidh first. A slight difference was my decision to walk up the western bank of the Allt Breabaig on my approach to GR726167 before crossing the burn. I did this as I had experienced this river before in much wetter conditions and crossing it can be tricky. This proved to be a shorter and easier crossing than the recognised fording point (marked by a cairn on the eastern bank) lower down the glen but I was able to cross dry-shod at this point later in the day.

An advantage of walking this far up the glen before setting about the proper climb is that of following a very attractive tributary to the Allt Breabaig all the way to its source on the bealach between Meall a'Chrasgaidh and Sgurr nan Clach Geala. This rushing burn is a delight with small pools and cascades all the way, interest is maintained and it never feels like a slog. 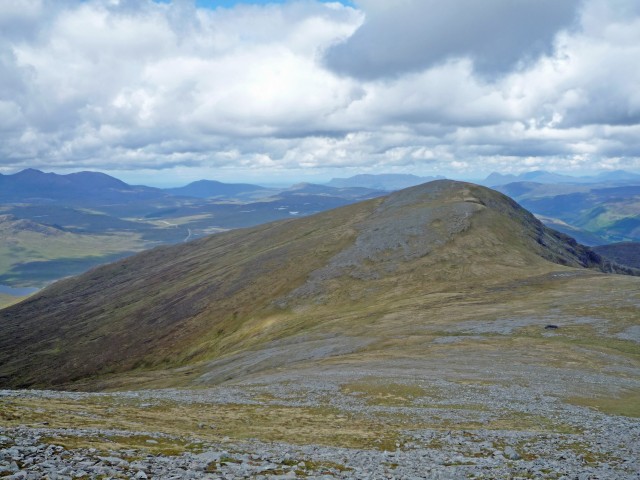 I left my pack at the bealach for the easy climb to the summit of Meall a'Chrasgaidh which is crowned by a smallish cairn and a windbreak a few metres to the north. It is a stupendous viewpoint, taking in An Teallach close at hand, Stac Pollaidh and the Coigach peaks and beyond to Assynt and the Glen Canisp Forest. Beinn Dearg and Am Faocagach dominate to the NE and then Sgurr Mor Fannich and Sgurr nan Clach Geala block more distant views to the S and SE. Swinging around and over the eastern flanks of Sgurr nan Clach Geala we can see Sgurr na Ciche and its neighbouring peaks and a little closer Fuar Tholl (Wellington's Nose) guards the entrance to Coire Lair. Torridon is very clear, especially Beinn Eighe and then comes Slioch and the Fisherfield Forest. (There is a good phone signal here so I contacted a friend to ask if he knew where I was based upon the described panorama - "sounds like heaven" he said). 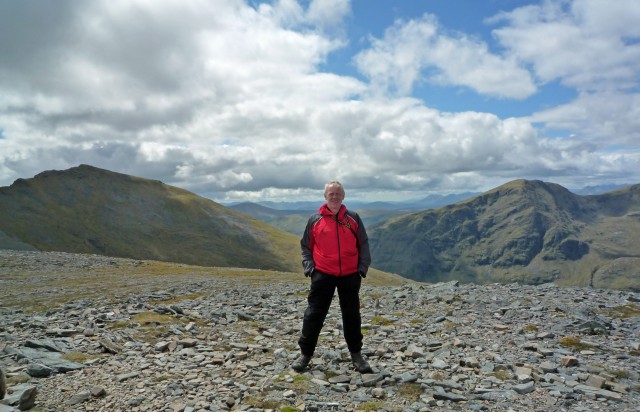 Back down to my pack and up the increasingly rocky and norrowing ridge to Sgurr nan Clach Geala. Fitter walkers than myself may be tempted by the excursion to Sgurr Mor from the bealach, as was a lady of 70+, I encountered descending the ridge. She was on 255 Munros and had done Sgurr Mor before but she felt it was worth taking in on such a good day!

The summit of Sgurr nan Clach Geala opens out expansive views to the south and changes the perspective in the general direction of Torridon. Those who have climbed Slioch will realise that it is a far mor complex and even more dramatic mountain than the classic picture across Loch Maree suggests and when seen from this summit this is confirmed. 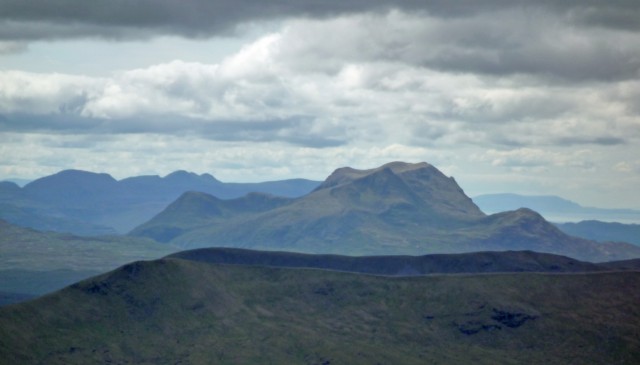 Slioch from the summit of Sgurr nan Clach Geala

We can also see our next objective, Sgurr nan Each which is reached by an easy descent and simple climb along an elegant curving ridge. 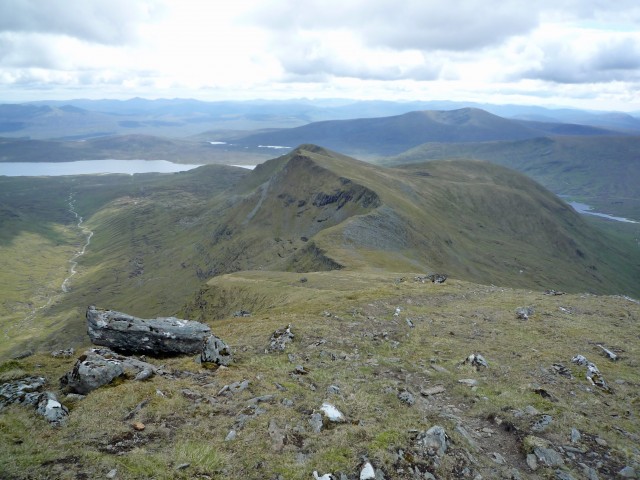 Grassy slopes with odd broken crags here and there lead to the excellent stalkers path near the head of the Allt Breabaig. Given a good crossing of the river, 80 minutes of brisk walking will see you back at the car.

As a post script, those interested in geomorphology may like to note two interesting features encountered on the walk. Firstly a true ox bow lake (more of an ox bow pond at about 50ft across), which has cut through, but is still silting up, to the right of the track when walking down to the old boat house from the road. Google Earth shows it quite clearly along with another one on the same burn. 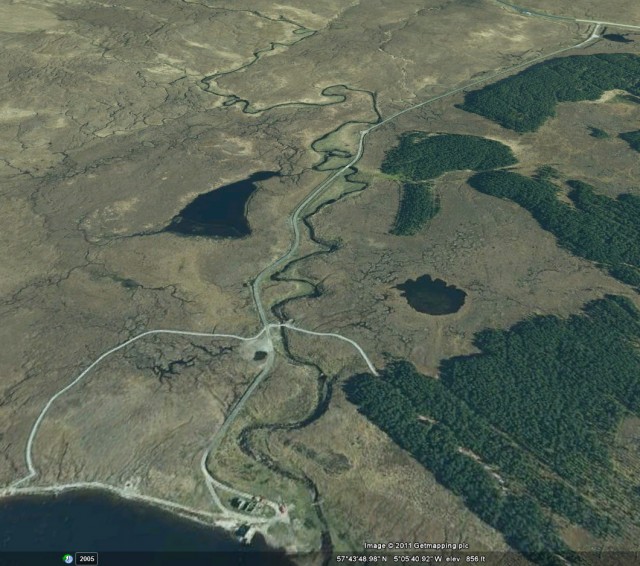 The walk starts at the top right corner. The small ox bow is between the first meander close to the track and the bridge over the river. The second (less developed) ox bow is diagonally up and left of the first one. This image also shows the "new" diversion through the wood which starts a few hundred metres short of the boat house.

Secondly, and of more interest I think, is a ploughing boulder. These huge rocks have moved downslope faster than the soil in which they are partly embedded and a furrow is left in their wake and a bow wave mound forms at the front. This one is on the deceptively steep slopes of the N ridge of Sgurr nan Each. 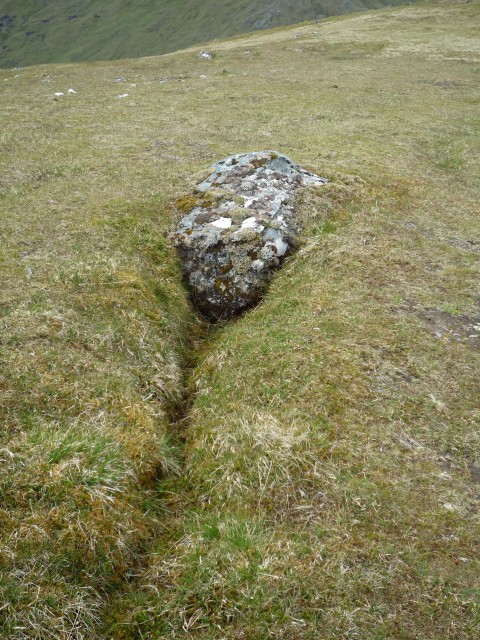 Ploughing boulder on Sgurr nan Each

Looks like a good day out and nice report