So here is my story and how I got the Munro bagging bug,

I know that it's almost 2 years on now since bagging my first Munro 'Braeriach' but as my addiction to the mountains grow, as does everything involved with it, like this walk report which I only did my first a couple of weeks ago, but like I say, the addiction is growing so watch this space for more walk reports.

that I have been such a late starter to the Munro's, especially when I spent half my childhood skiing on the cairngorms and still to this day snowboard there, and yet I still never got to the summit of Cairngorm with my ski's or my board, I personally would have called it cheating to have claimed my first Munro anyway, going up most of the hill on the old side facing chairlift or on the funicular train.

So there i was on a late summers day back in 2009 enjoying the sun out in the garden, (with great views over the Cairngorms, i might add) and was talking about the hills with my neighbour,(Valmar1965) and I said that I always wanted to go up the 'Gorms' in the summer and see Loch A'an and the Shelter stone, so plan was made and next day we were off. Parked the car at the Coire cas car park and headed up Fiacaill a' Choire chais (the Fiacall ridge to us locals) with it's Cairn on top, still not a Munro Cairn though, started heading down Coire Raibert and viewed Loch A'an for the first time with Beinn Mheadhoin and it's Torrs in the background, think that was the defining moment of the start of my hill walking bug, just beautiful it was and awe inspiring, to see such a lovely loch surrounded in majestic mountains and waterfalls was amazing and to top it off, a BEACH...fantastic So down we headed and had lunch on the beach, lovely sunny day sitting at a beach in the middle of the Cairngorms, amazing i thought, then after a breef stop we then headed over to check out 'The Shelter Stone' and what a large lump of grey granite it is too, I posed for a photo which I tried to replicate from an old black and white postcard which I ended up standing in the completly wrong place my modern take of the postcard 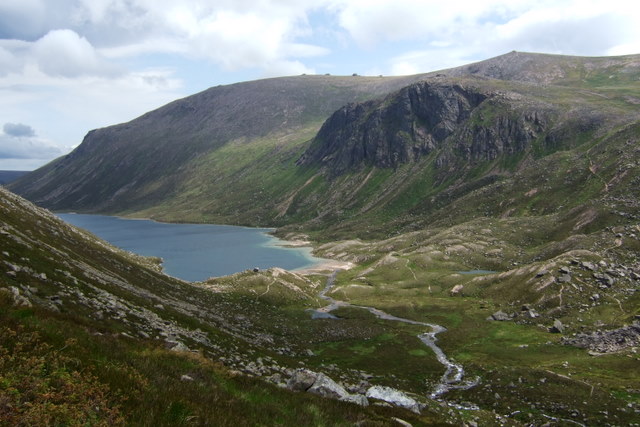 Looking back down from Coire Domhain

and out down Coire an Sneachda back to the car park, Loch Morlich in the background 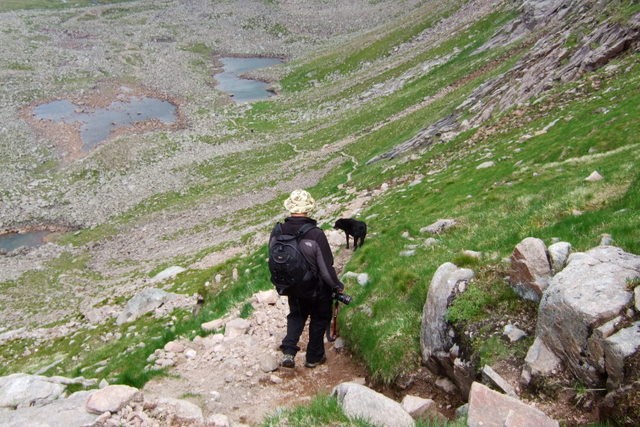 still no Munro in the bag

as we discussed over a pint

looking through the photo's on the camera, so then the next plan was hatched, MY first Munro, and it had to be a biggy and one that I would never forget,...Braeriach, it was decided....

A couple of days later and a beady eye on the mountain weather forecast and we were off, being an amatuer we did our homework, spent a few quid getting the right gear and bought maps, downloaded instructions, got the plasters, the lot, even decided to go for the longer route from Whitewell as to not have to take Keisha (the dug) through the boulders at the Chalamain gap

Parked the car at the end of the Whitewell/Tulluchghrue road which is very popular with walkers parking up for a day in the hills, set off down past Barry's grave and onto the long path into what is affectionatly known as piccadilly circus, where the paths break up in all directions to go to Loch Morlich or Loch an Eilein or Glen Einich or our path for the Day, the Lairig Ghru Start of the Lairig Ghru

A few miles in and just at the start of the 'U' shaped Valley which is the Lairig Ghru we headed up the East side onto Coire Gorm, from here theres a great view over to Creag an Leth-choin (Lurchers Crag) From here it was a fair slog up and with many false summit pretences with another summit behind each other and much higher than the one before, I soon learnt not to think that I can see the summit until i'm actually there, little did I know I still had a fair way to go, but with the thought of my first Munro almost bagged I was like a rat up a drainpipe 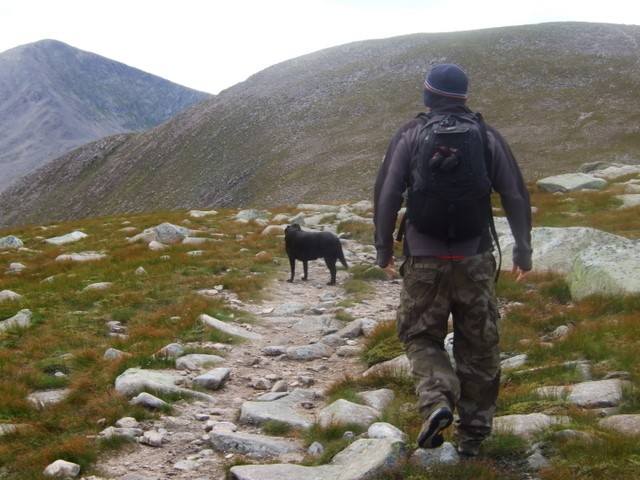 The slog up and over Coire Gorm soon opened up as we rounded Sron na Lairige and the view South down the Lairig Ghru with Ben MacDhuie on the left and Cairn Toul on the right was just amazing, with the views getting better and better I knew we were not far off the summit now, Looking South down the Lairig Ghru Wow, look at that view There it was, the Cairn of Braeriach and MY first Munro 'In the Bag' My first 'In the Bag'

and every hard earned step was worth it as the view from the top was just breathtaking, I gave Braeriach a five star rating, not just because it was my first but I thought that it deserves it, I felt like I was on another planet and that me and my Neighbour had the third highest Mountain in Britain all to ourselves, even Keisha looked like she had a sense of self accomplishment and achievement, Keisha on her first Munro at the age of 10

and so we should too, picked a long and hard Munro for my first but standing at the Cairn on the summit looking over to Cairn Toul I knew then for sure there would be many more moments like this to come 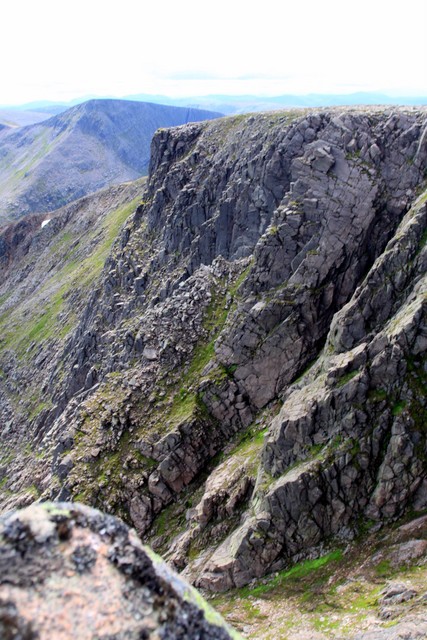 another view from the top as I want to see the best views I can from each summit, maybe the addiction will lead onto winter bagging, who knows, time will tell, Keisha is now 12

and still bagging with me, just wish I started earlier with her, she has 20 to her name to date and I have 25 and counting, thought last year when myself and Valmar1965 did the Lochnagar 5 (report to come) that I should leave her at home for that one, so we will tick of the easier one's for her for now..

If that report had of been a book it would've been my most FAVOURITE read ever, WELL DONE Mackay ~ from a beginner bagger YOU have inspired me to want more & more & more ~ I'm soooooooo impressed ~ photos are FANTASTIC too

A great report that brings back lots of memories for me. It's nice to see a pic of the Goat Track, It's years since I last used it. Braeriach is my favourite mountain, I could sit up there for hours, then wander across to the Wells of Dee and follow it to the plateau's edge, go to Einich Cairn and take in the vastness of the Moine Mhor. The Cairngoms have an atmosphere, that once you become familiar with them, you become part of them.
Your dog's doing well. My Golden Retriever was past climbing the bigger hills with my by the time he was 10.
Thanks for sharing.

Thanks for all the comments everybody, I wanted to add the .GPX map route that i took but i'm at work on an oil rig of the coast of Israel and for some reason they have blocked the opening of maps, strange country, even on the smart phone on google maps, Israel is just a grey shaded area, anyway will add map route when i get home,

I couldn't agree more with you Border Reiver " The Cairngoms have an atmosphere, that once you become familiar with them, you become part of them." I read some where the other day that if you get bored of the Cairngorms, your bored of life itself, so true.

been at work only 3 days now and sick of the sight of the Sea allready, no place like the Mountains of Bonnie Scotland, Hame

HeelanGal wrote:If that report had of been a book it would've been my most FAVOURITE read ever, WELL DONE Mackay ~ from a beginner bagger YOU have inspired me to want more & more & more ~ I'm soooooooo impressed ~ photos are FANTASTIC too

Your too kind HeelanGal, but hay you are my sister after all,

can't wait to get you up your next Munro, my next report will be of our walk to Ben MacDhuie, YOUR first Munro, watch this space..xx and it will start with our walk through the Lairig Ghru, weird how we both started with a long walk in the Cairngorms before deciding to bag a Munro

looks like you really enjoyed this trip, looking forward to more TR's.

i think will just pop up tomorrow

dad will love it