They said it wasn't going to rain

so my friend Shelagh and I grabbed the chance of a day out. Shelagh is relatively new to Munro bagging but is now hopelessly addicted so I feel I ought to help her feed her habit. I have "done" these hills a few times but never from the north and seen from Glen Lyon there are several ridges that look like a good approach. We parked at Inverar, walked down to the bridge over the River Lyon and then up to Dericambus. From there a zigzag path leads up the hillside although higher up it all but disappears and we ended up ploughing through knee-high heather. But we soon reached the ridge and then followed the fence line up towards the summit of Meall Greigh. There are great views down Glen Lyon and of the hills to the north. It was somewhat boggy but we eventually reached the main ridge where we encountered our first person of the day (we didn't see anybody else til we got the summit of Ben Lawers). 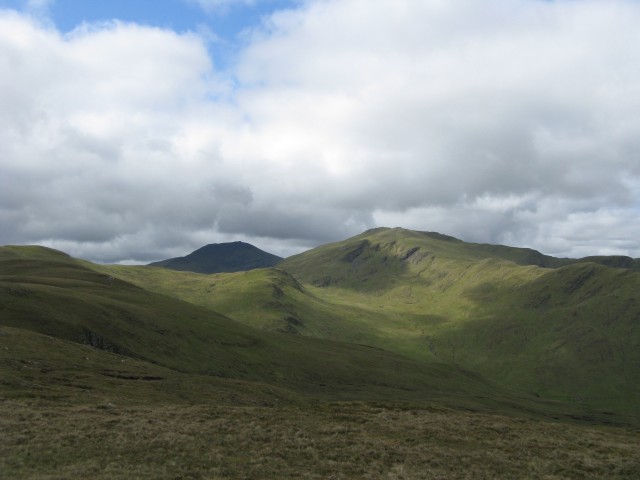 Another one in the bag for Shelagh!

we headed along to Meall Garbh. 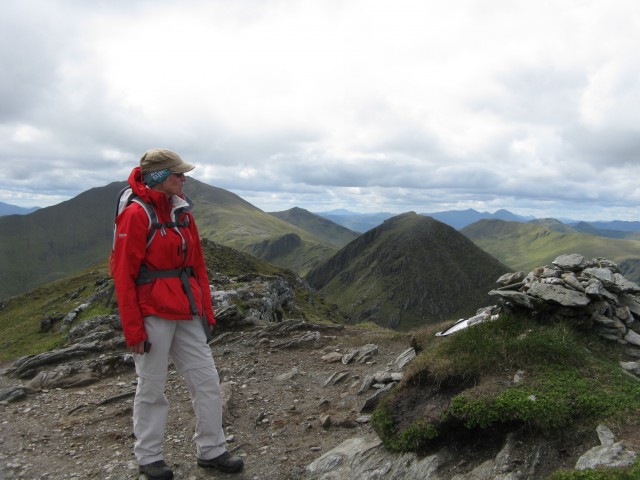 A good place for posing

An Stuc loomed ahead but we made short work of the scramble to the summit and continued on to Ben Lawers admiring Lochan nan Cat as we went along. There were masses of wild flowers - does anyone recognise this one? Any botanists out there?

As we climbed to the summit of Ben Lawers we could see lots of people standing on the cairn but fortunately when we arrived there were only two other people there. 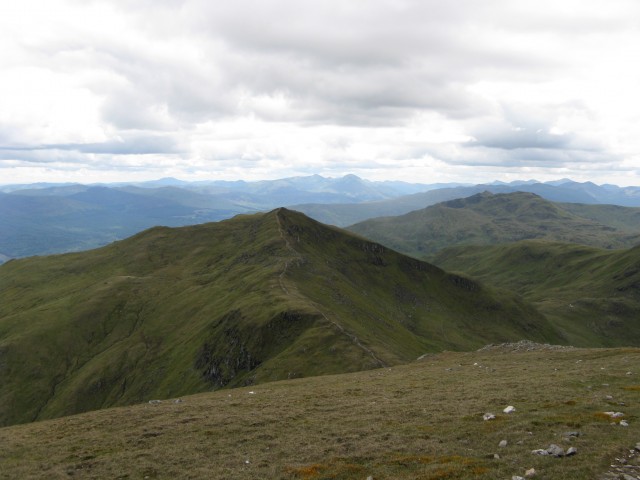 and we were soon there. We descended NW to the bealach for more food and to consider our options. Carry on and do Meall Corranaich and Meall a Choire Leith or go back down the glen to the north. We opted for the latter and quite spectacular it was. The two ridges tower up on either side with waterfalls cascading down on the east side. There were hundreds of deer up in the corries and the remains of lots of shielings. We both agreed that this was probaly the best part of the walk. We reached the track along Glen Lyon after some time and enjoyed a pleasant if rather long stroll back to Inverar. Rain on the way?

You've both done well there, especially your friend if she's new to hillwalking. A monster walk, with An Stuc thrown in as well. Enjoyed reading the report and the pics.