Torridon is one of my favorite areas in Scotland. I'm still waiting impatiently for a good enough day to tackle Liathach (the only of the big Torridon trio I haven't climbed yet). Unfortunately, weather hasn't been so great lately, so for our next trip we picked an easier hill, Maol Chean-dearg. I had a good look at it the previous autumn from the top of Ben Damph - now I imagined how good the vice-versa view would be!

our_route.gpx Open full screen  NB: Walkhighlands is not responsible for the accuracy of gpx files in users posts
This is another good route for beginners and those who like walking on well-constructed paths. The final climb to the top is steep and bouldery, but nothing difficult compare to e. g. Skye

We parked by Coulags Bridge and took the track towards the only house in the glen. Just before the house we turned left and followed a path along the river.
The bridge: 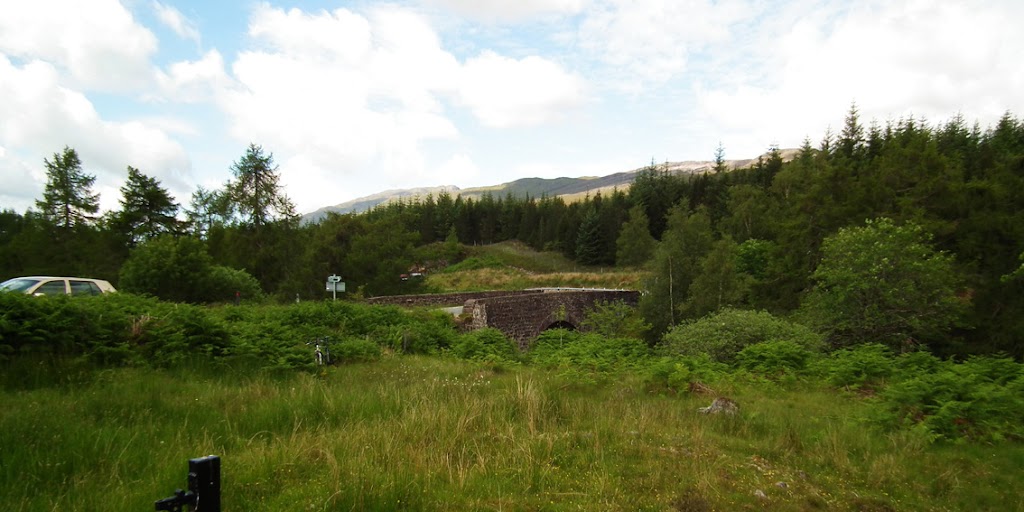 Our target Munro was still hidden from view, but the neighbouring Corbett, An Ruadh Stac , presented itself nicely in the morning sun: 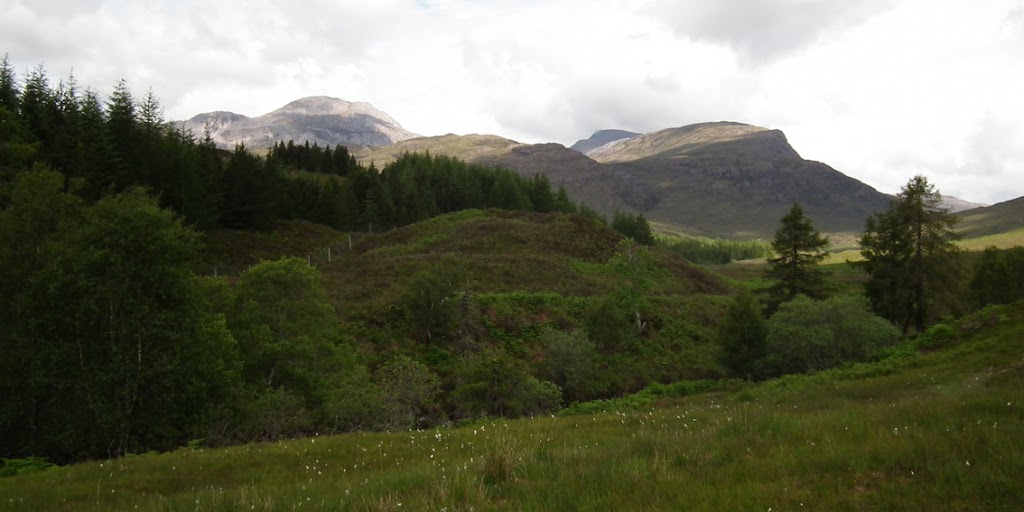 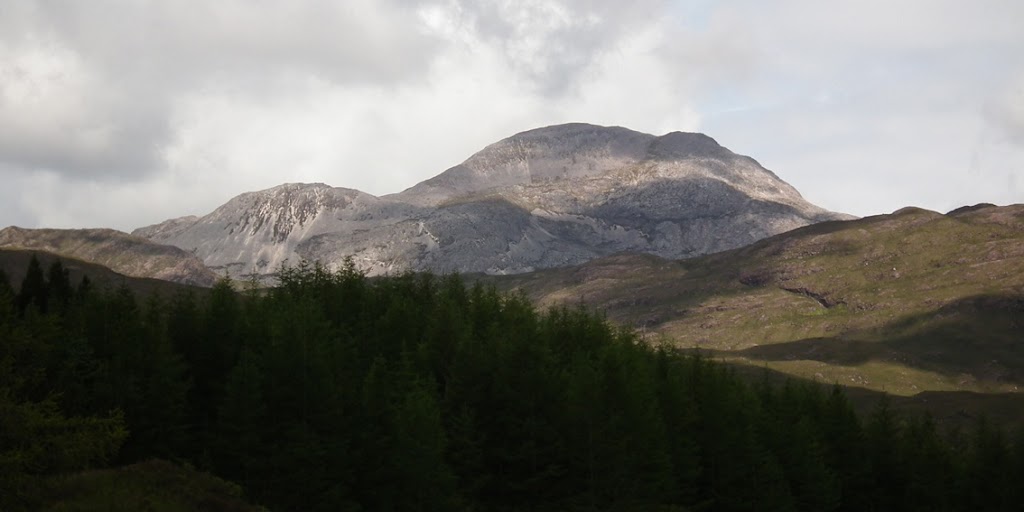 Weather was OK so far but I remembered that again, showers were predicted for the afternoon and cloud level was supposed to be at 900m. At the moment, hill tops were still clear.
Weather looking promising: 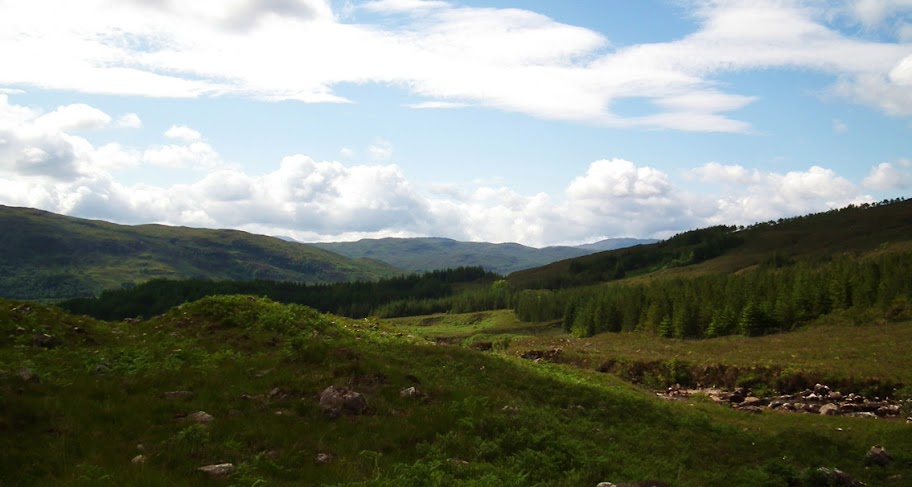 The well constructed path crossed the moorland and it run through the glen along the east side of the stream Fionn-abhainn. After about 2 km ow walking we crossed a small bridge and continued on the other side of the river. The top of Sgorr Ruadh was well visible to the east. It brought back memories from earlier this year, when we climbed it in knee-deep snow, not seeing much around us. Only now I could appreciate how steep this hill looks. 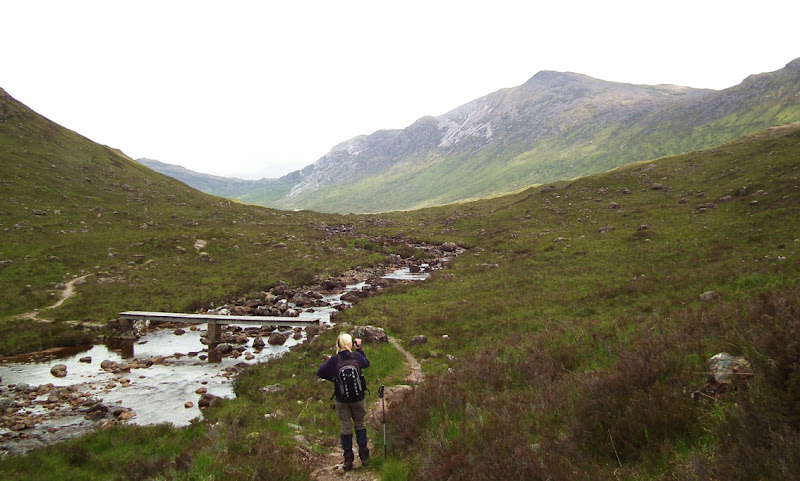 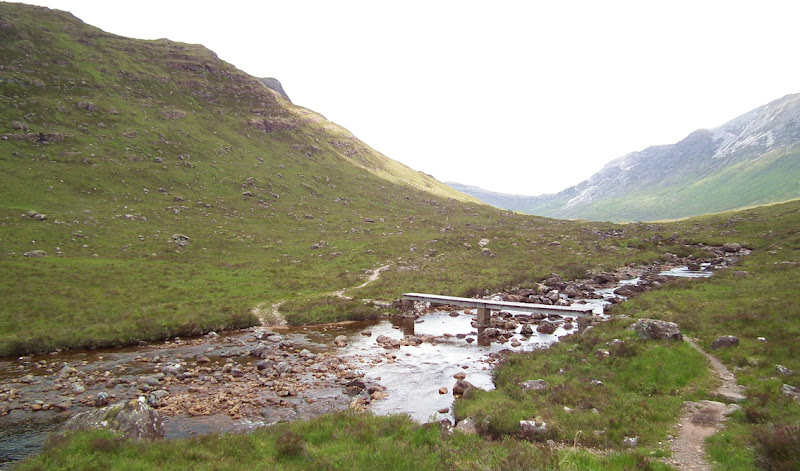 We walked past the bothy Coire Fionnaraich and carried on along the path, boggy in places, until we found a branch heading west uphill. The initial climb is steep-ish and the path is eroding but the great view towards the bulk of Maol Chean-dearg was strong enough motivation to keep us moving 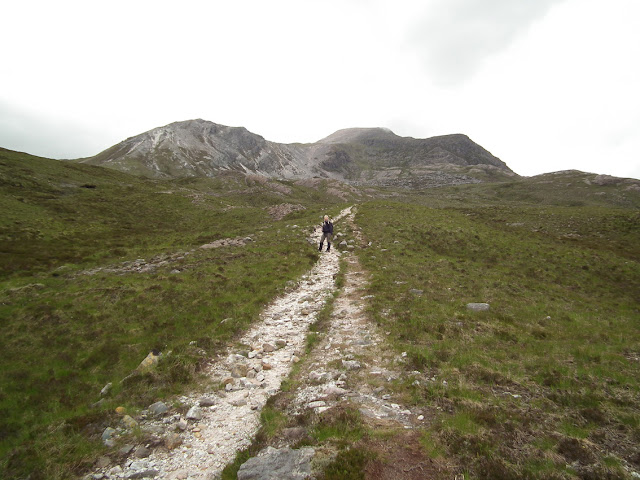 To the left - another steep rocky cliff of Meall nan Ceapairnean: 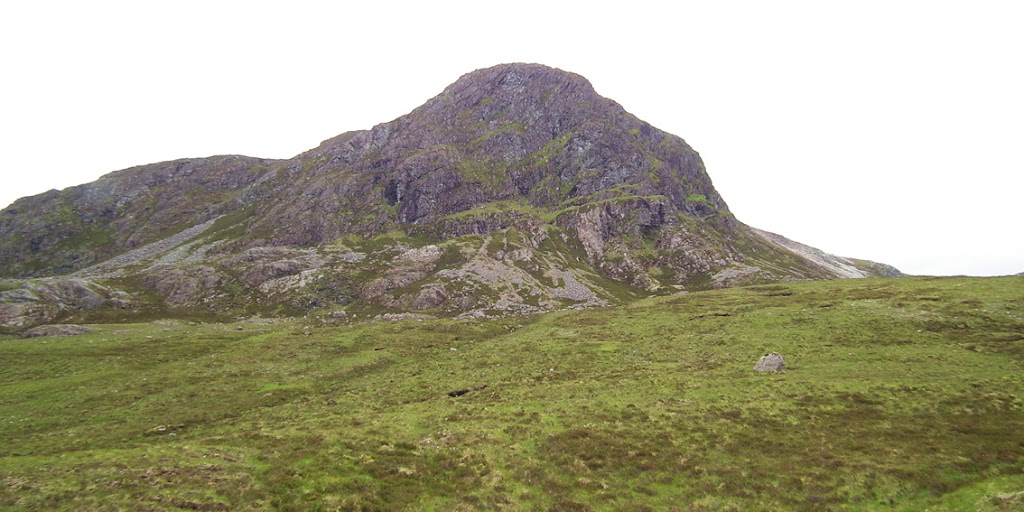 A glance back at Fuar Tholl: 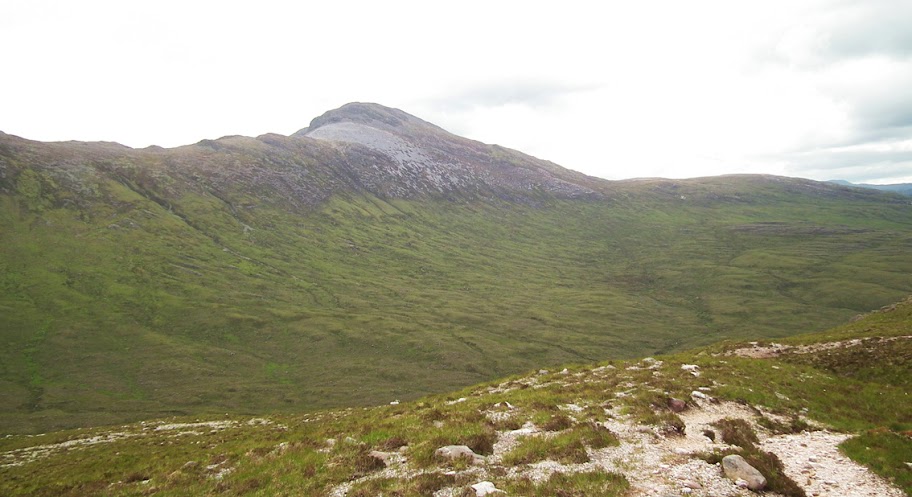 All the way to the bealach between Meall nan Ceapairnean and Maol Chean-dearg we were talking about how great the views were going to be when we reach the top. And then, when we got to the col, we were surprised by grey cloud coming in from the north - hmmm, it looks like we were counting the chickens before they hatched

The path up the scree section, with some dark cloud coming... 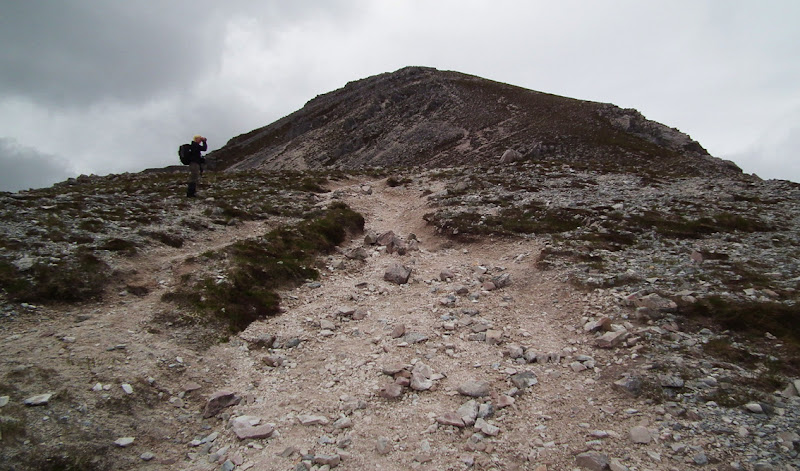 To the west of our target Munro was another mountain worth climbing - An Ruadh Stac , which from where we stood made the impression of a tough one to conquer: 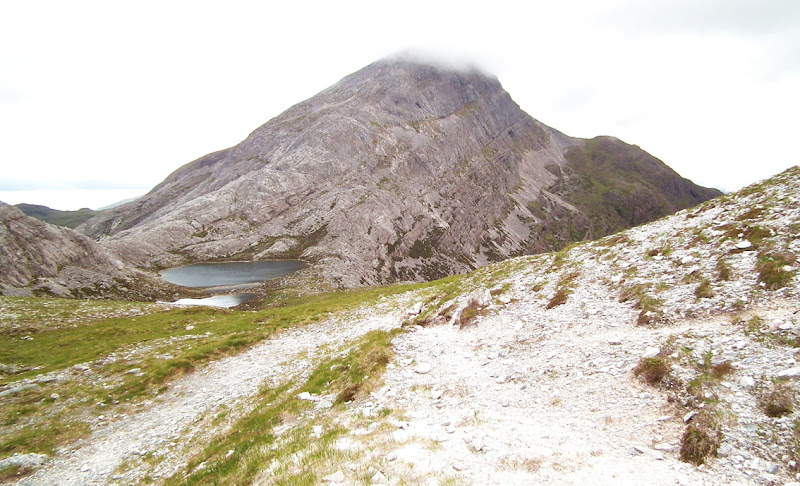 The lochans at the bottom of the Corbett: 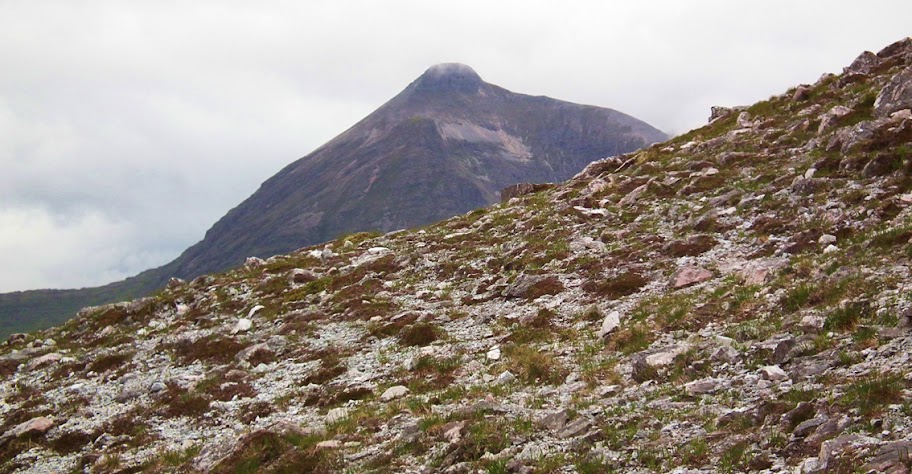 Still smiling, regardless of the cloud: 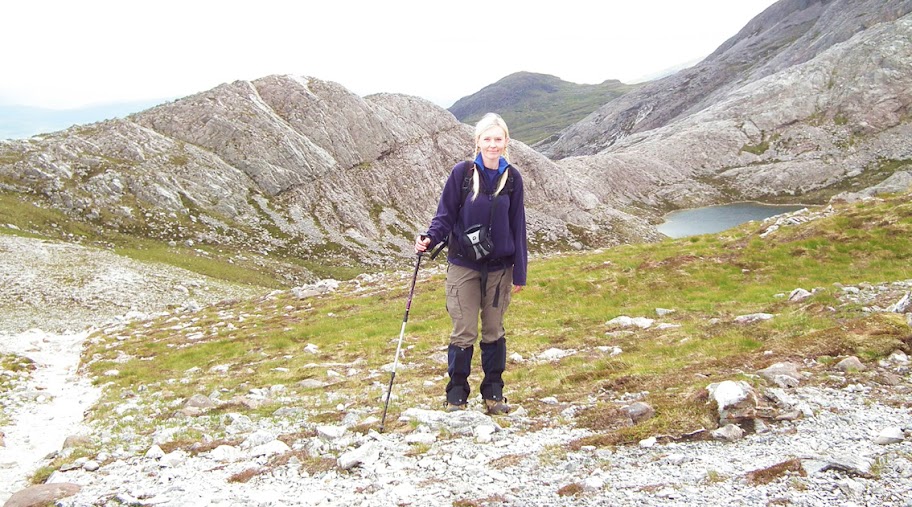 View to the south along the shoulder of Meall nan Ceapairnean: 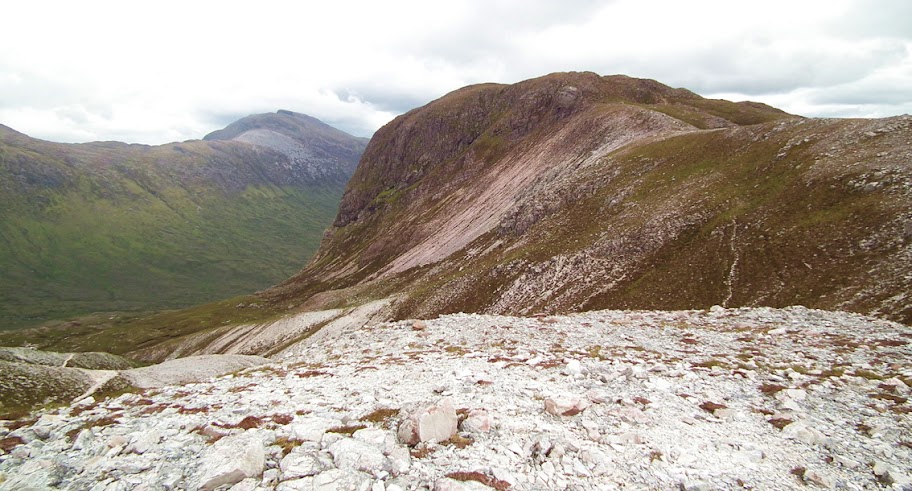 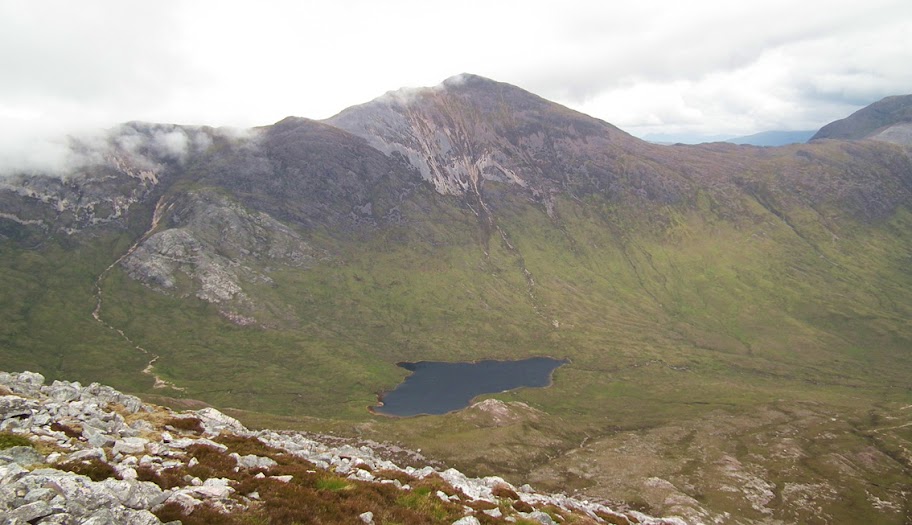 The"ugly side" of Fuar Tholl: 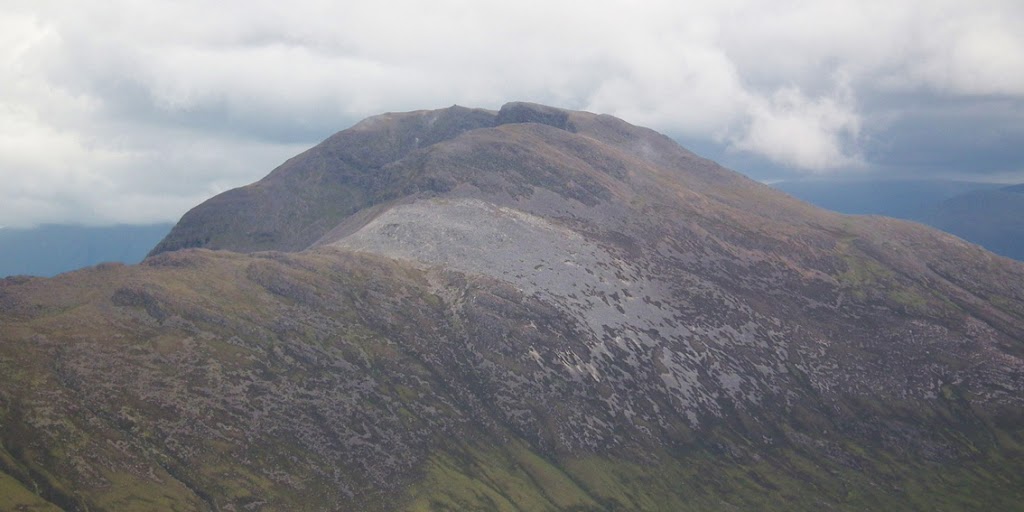 As we tackled the scree slope, more cloud arrived: 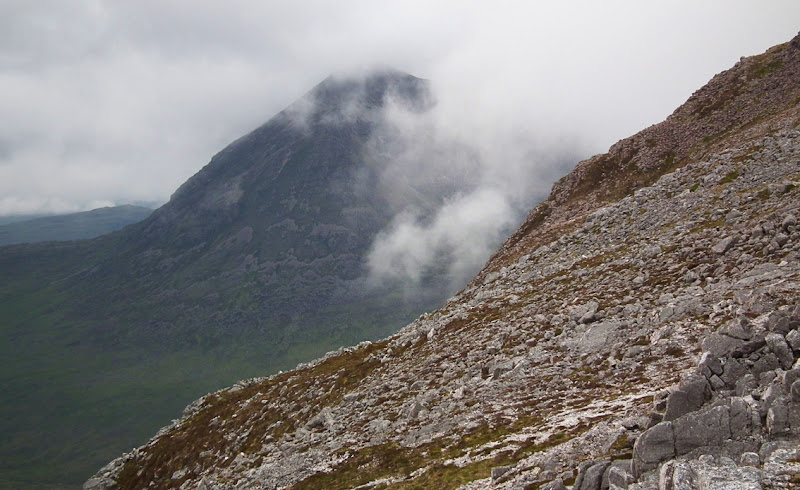 We climbed up to a grassy plateau with a faint path heading towards the summit. I was disappointed: the mist was there already... 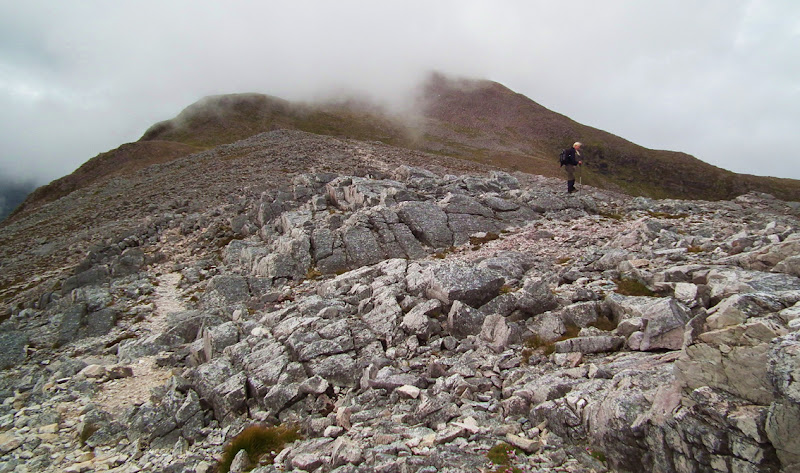 The final ascent was up sandstone boulders and as we tackled it we we entered the clouds. There was no hope now for a clear summit and good views as the mist looked thick and persistent... We found the summit cairn and spent a short time sitting in its shadow. Well, at least another Munro ticked. 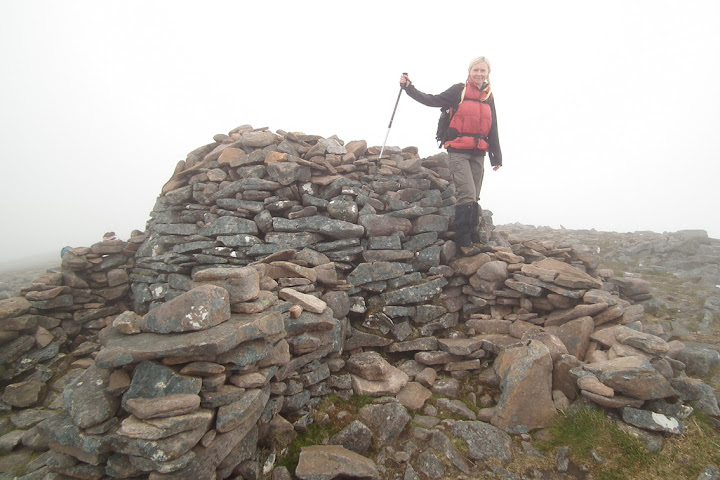 The cloud stayed around the tops of the hills as we walked back down... Luckily it kept to about 900 m so lower slopes were clear, and we had to be satisfied with views down to the bealach and towards Meall nan Ceapairnean: 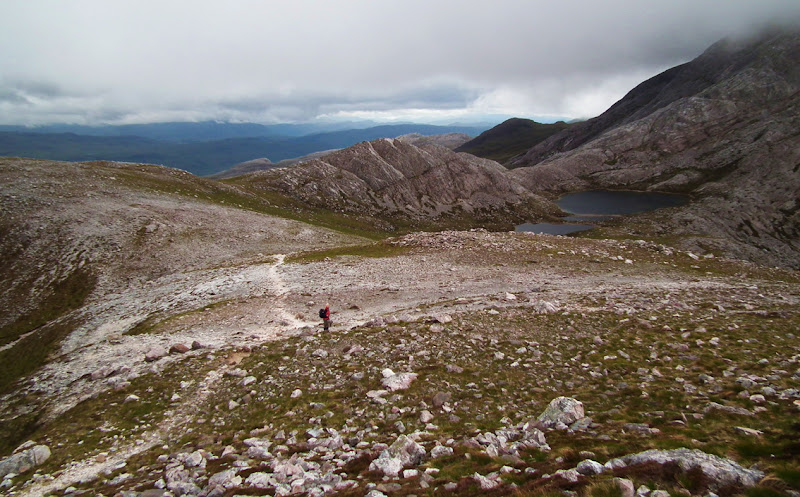 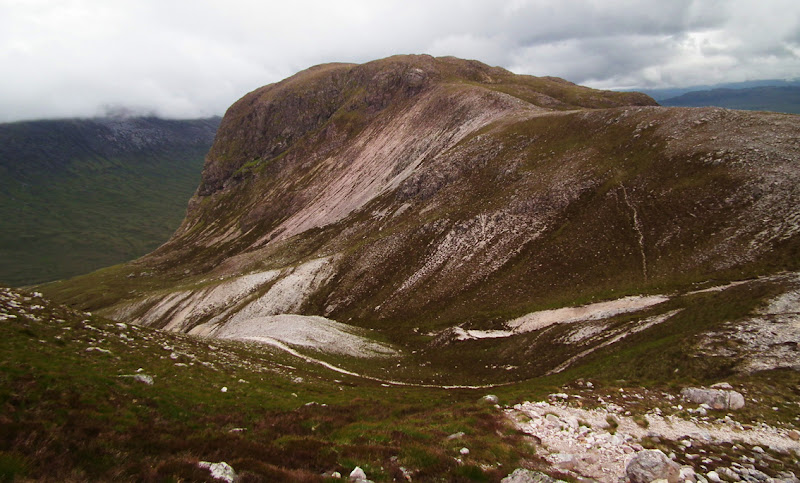 Down from the glen, when I looked back, I saw clouds now covering Sgorr Ruadh as well: 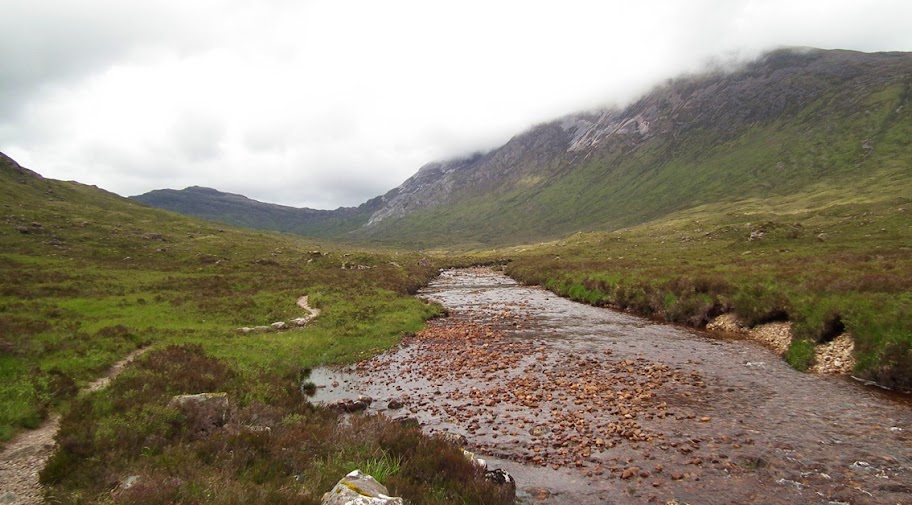 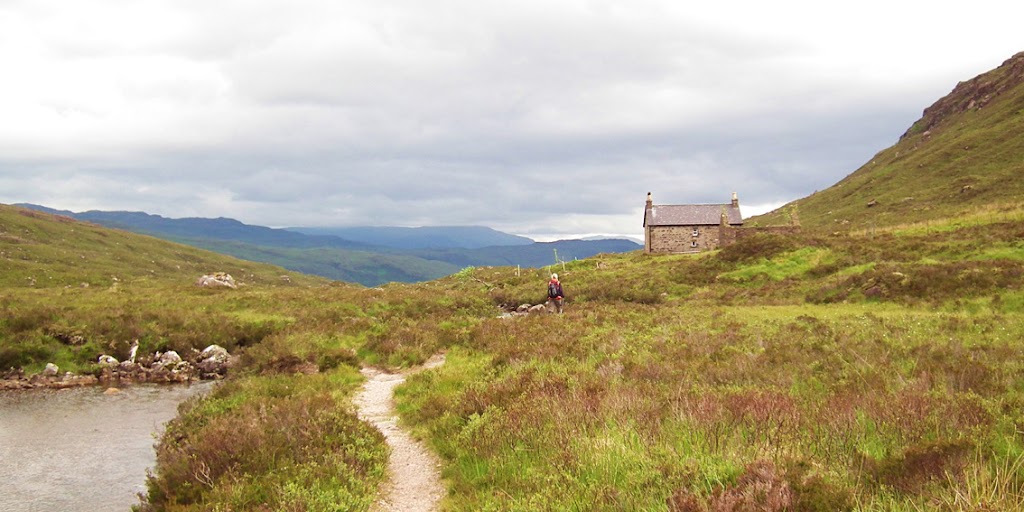 Back by the small bridge: 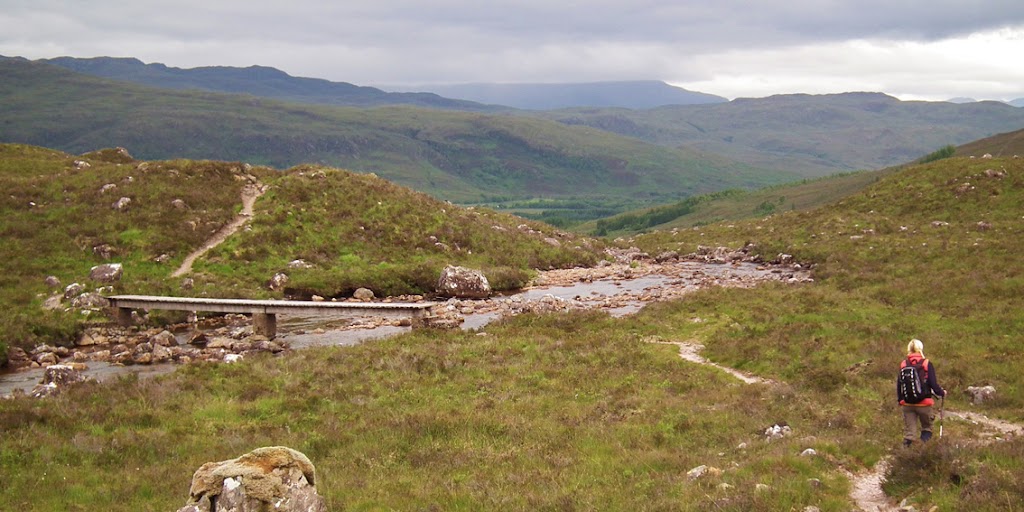 Mr Toad on his afternoon stroll: 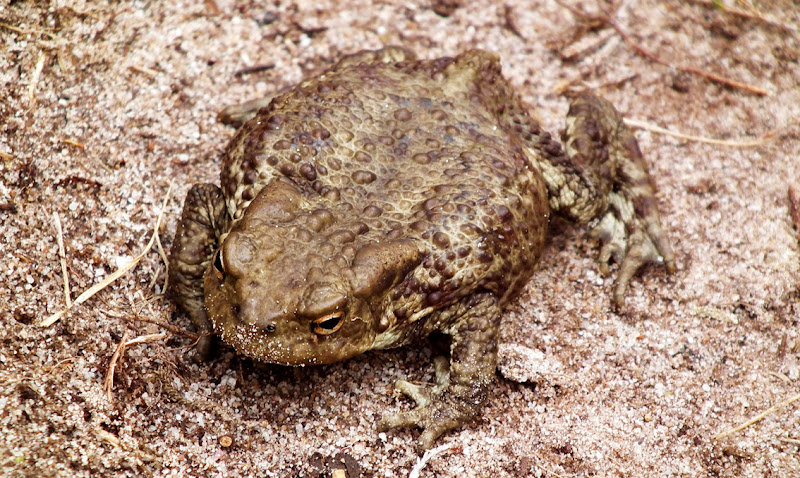 Time to go home and cook some dinner. What's in the menu today? Frog legs?... 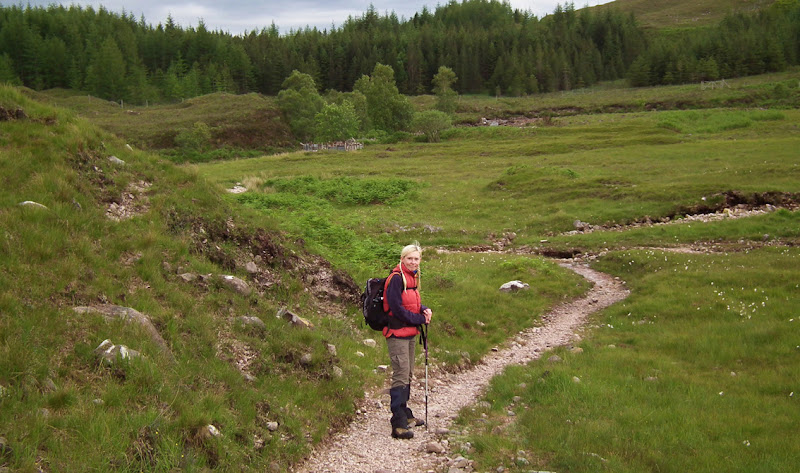 A bit disappointed with the outcome of our trip, we are now planning to go back up that path in more decent weather and tackle An Ruadh Stac

Thanks for sharing the report and nice to see good photos of one of my favourite areas again.

It's a toad - so it has to be Toad in The Hole - yuk.
I love the Torridon / Coulin Forest area as well. We used to spend many family hols up there and I often had a wander around, the best walk being from Achnashellach to Loch Torridon, via Coire Lair. Last time I was up Maol Chean-dearg was in 1989 and it was a superb day in May...I've put in a couple of old pics to show what it's like in good weather, just to encourage you to return.
There's a great stalkers path that goes from the col of Maol Chean-dearg / An Ruadh Stac, right round the North side of Maol Chean-Dearg via Loch an Eoin and rejoins the outward path - well worth an extra hour or so walking.

An Ruadh Stac from near Maol Chean-dearg

Thanks Border Reiver, your pics add exactly what was missing in my report

We will be back in Torridon for sure, we're lucky to live close enough. That dreaded Liathach still waiting t be climbed

Super report despite the cloud on the summit. Sgorr Ruadh looks a real treat too. Due to be up that way in October... maybe even soon if the weather looks good.

Looks a reasonable day - must go back and do MCD sometime again.

If you're planning An Ruadh Stac I'd recommend the approach from the north on the path Border Reiver was talking about. A much more scenic approach.