Conachair, the hill at the edge of the world

Conachair, the hill at the edge of the world


I had the great fortune to be invited to join a team filming and sea kayaking on an expedition to St Kilda. We were on and around the archipelago for three days and although we were focused on paddling we got a day on Hirta where we walked a circular route including the highest hill in the group, Conachair at 430 metres.

We were based on MV Cuma, skippered by Murdani MacDonald of http://www.island-cruising.com/. Murdani knows these waters intimately, and Cuma (unlike most of the boats which visit St Kilda) is designed to be used as a base.

There is so much more to St Kilda than Conachair, so this report will be more a tour than a route description.

Approaching St kilda from the north east. From left to right: Hirta (?Stags), Soay (Sheep island), Boreray (Fortress island) and Stac an Armin (Warrior's Stack). the name of the group is interesting, there was no saint named Kilda! It's believed that the most likely origin of the name is the old norse word "Skildir" meaning Shields; which is very appropriate.

Our first view of Village Bay. It has to be said that the military buildings and antennae do intrude on the scene a bit. 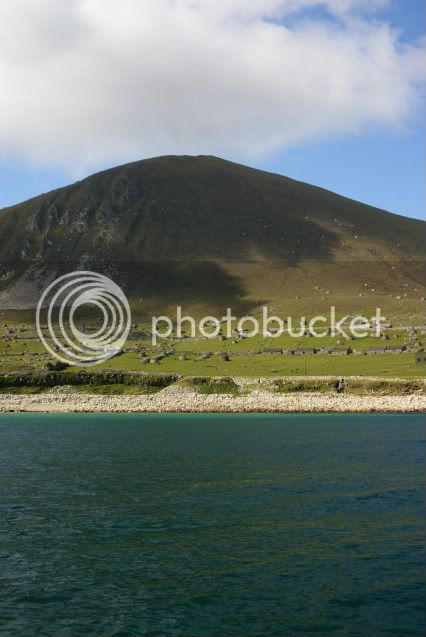 Dismbarking from Cuma for a paddle. this is an unusual method of starting a hillwalk!

This inscription is on a rock at the jetty. St Kilda is a place of superlatives; the UK's only UNESCO dual World Heritage Site, the highest sea cliffs in the UK, the largst seabird colony in northern Europe, home to one quarter of the world's Gannets and so it goes on. The NTS warden will normally meet visitors to give a briefing; we were incredibly lucky to have been granted access to all the islands and stacks (if we could land.....) 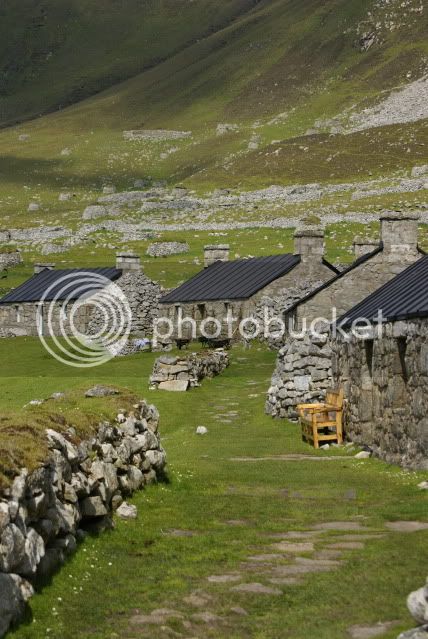 We spent a good couple of hours exploring the village with it's one street, Kirk, school and burial ground. the island was evacuated in 1930 after thousands of years of occupation. Exposure to the Victorian tourist trade, the adoption of a particularly strict form of religion, disease and plain hardship all contributed to a general decline in population. Once the population of young men fell below that required to sustain the fowling, the community was doomed.

The route to Conachair goes first up to the head dyke, a wall enclosing the lower ground around the village. There are Cleitean everywhere on the islands and even on the outlying stacks. the Cleitean are drystone vaulted stores used to store birds, feathers, eggs, potatoes, barley and wool. There are several different types, each adapted to the item it was intended to store. They are pretty much unique to St Kilda.

A stiff climb goes past some walled enclosures and then climbs to a bealach on the edge of the northern cliffs. the view to Boreray and the stacks is stunning.

As is the view back down to Village Bay. Dun is on the right, with the outlying stack of Levenish (the only stack we didn't get to visit) in the distance. Cuma is at anchor in the bay below.

The route now turns east along the highest cliffs in the UK. Fulmars nest right up to the top of these cliffs.

Just below the summit of Conachair there is part of the wreckage of a Bristol Beaufighter which crashed here, killing the crew. There's a memorial to them in the village kirk.

We were in intermittent cloud on the summit, but the views were well worth hanging around for; this is the island of Dun

Any walk on Conachair in the early summer will be enlivbened by the Great Skuas (Bonxies). Although we were careful not to go anywhere near the nests, our presence was met with the usual reaction....

Coordinated attacks! They are large and fearless birds and hugely aerobatic. You can either duck....

Or not! This one gave me a resounding slap on the forehead - time to move on...

After crossing to Mullach Mor with it's aerials and generators, we descended south on the access track, getting a good view into Glen Bay to the north west. This glen contains the oldest archaeological sites on Hirta, amazing since there is no suitable landing in the bay, the edge is a sheer cliff.

To the north, Mullach Bi rises to 358 metres, again on the edge of huge cliffs.

Our route continued south to Ruabhal and the Lover's Stone.

We continued to the edge of the Dun Gap which separates Dun from Hirta. The gap looks calm and easy in this picture, very different conditions to the wind and turbulence we'd experienced when kayaking through it in a northeast F5 the previous evening! The St Kildans grew potatoes and some barley on the slope of Dun and also visited to catch Puffins.


We finished our walk by contouring above Village Bay back to the jetty and our kayaks.

It had been an amazing walk, and when combined with kayaking around the base of the cliffs was an unforgettable trip.

Underneath the cliffs in the south west coast of Hirta

Heading along the south coast of Dun 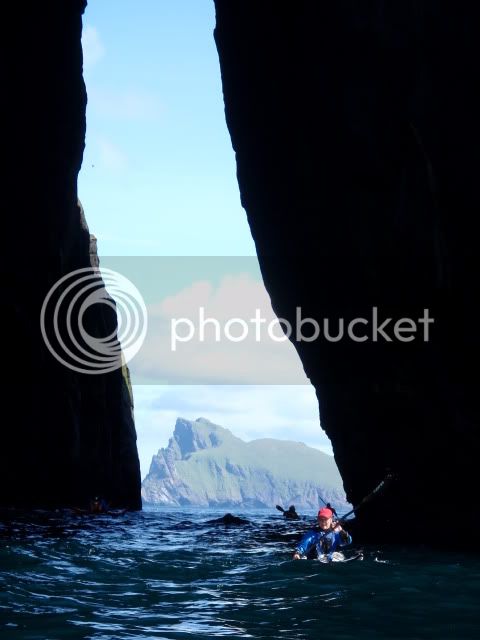 In several places you can paddle through the islands as here, the Great Arch on Dun

Stac an Armin from the base of Stac Lee. A group of st Kildan men and boys were stranded on Stac an Armin when the crew which landed them succumbed to smallpox on their return to Hirta. They survived on the stack for nine months before being rescued....

Stacks in the sound of Soay

There are seabirds simply everywhere. The two metre wingspan gannets look like specks above the stacks

St Kilda is a magical place to walk, explore and kayak. All too soon we had to leave before our weather window slammed shut. Conachair is the highest, but we didn't get to tick these three - maybe next time?!

You were fortunate to get the birds - it was a bit early in the year when I went but there were gannets, great skuas, puffins and fulmars.

Is the "channel" up to the lovers stone a volcanic dyke?

I only said wow about 6 times during that report

Same with me, so many wows!!! Thanks for sharing your great adventure....

Oh this report is lovely. It's an ambition of mine to one day get to St Kilda, it's so remote and looks beautiful.

Thanks Bod, Kinley and Chickadee,

We were repeating wow every two or three minutes - it's that sort of place! I've deliberately left out perhaps the most spectacular stuff because it was kayaking around Soay, boreray and the stacks rather than walking, so isn't really appropriate for the site, but there are some posts on my blog at http://mountainandseascotland.blogspot.com/ and on Douglas Wilcox blog at http://seakayakphoto.blogspot.com/

Hi Hants, yes, there was one of the few basalt dykes we saw running right up the hill and emerging at the Lovers Stone. Apparently the St Kildans used to balace on the edge of the stone with just their toes like a board diver and grab one heel with the opposite hand as a test of balance. blimey!

Might take an air rifle for those birds though - joking - maybe a spud gun then...

Fantastic report - read a lot about St Kilda and always envisioned a really dank horrible place (though still fancied a visit) - The photos from your trip makes it look like a potential mega tourist hit!!

stunning shots of which looks like a magical place.

Thanks a lot for sharing!!

Great report and amazing pictures of what seems a majical place. I sailed round it years ago but didn't appriciate it at the time (teenagers!) would love to go ashore and explore.

Great report. I linked up with Gordon & Morag the following week, and I'll post the trip TR later. They were still ecstatic about the St. Kilda cruise and I'm looking forward to adding the new DVD to my collection.

Apologies for not replying sooner to the comments - I'm working in the Middle East at present and rarely get internet access.

Thanks for the kind words - St Kilda is a stunning, superlative place - go there if you can, I guarantee it's worth the effort!

rvrscum - your wait for the DVD is nearly over.... Pre-orders are being taken from Sunart Media, and the preview is available to view at http://www.seakayakwithgordonbrown.com/Main.html. Even for those not into kayaking, it's a good watch (though I'm a bit biased!)

Missed this report, glad it bubbled up to page one again. Many wows in my house on hearing the story and seeing the pictures, especially the last.

What a fantastic and incredibly interesting report, thanks for taking the time to create this, stunning photos of stunning scenery and some excellent and unique perspectives - love this