Having recovered - thanks to anti-inflammatories and a hot bath - from Liathach the day before, I set off from the car park about 1km from the W end of Loch Sgamhain. I thought a nice grassy stroll up Moruisg and across to ex-Munro Sgurr nan Ceannaichean would be a trouble-free respite after the gruelling Big L. Wrong....

The first problem came in the shape of a huge bull blocking the end of the little tunnel under the railway. "Was it not just a cow" you might ask. Fair question, but if it was you could go ten-pin bowling with the contents of its udders. It wasn't going to move and I didn't want to photograph it in case I ended up writing this report from A&E, so I headed W along the railway line for 100m or so and took a fresh bearing up the pathless slopes. The second problem was how deceptively steep a slog it was, not helped by frequent peat hags and the slippery wet grass. The summit was covered in cloud so I looked back quite a lot on the lower slopes to enjoy the views N towards Glen Torridon. A problem I find with these rounder hills is that you keep thinking you are close to the summit ridge when its only the next bit of horizon - and so it was here. The absence of a path slowed me too, as I had to keep checking my bearing. I began to enter the clouds but fortunately my navigation held and in the mist I stumbled on to the cairn. Soon after visibility was down to a few feet at best, but heading hopefully on a bearing SW I ended up on a decent path edging the cliffs of Coire Toll nam Bian leading down into the Coire an Tull Bhain and then up the steep rock strewn slopes of Sgurr nan Ceannaichean (SnC). by the time I hit the summit ridge I was seriously doubting the SMC decision to demote this hill. Its a fair challenge, worthy in all respects (apart from a few centimetres) of Munro status. I stumbled from cairn to cairn in the dark before pausing for a snack. I then set off, still in deep cloud, to seek the N ridge and my return.

I found a path, which was clear enough initially, but I managed to lose it and head across rougher, boggy, pathless ground towards the E bank of the Alltan na Feola. About a third of the way down the sky cleared enough to offer some lovely views, along and across Glen Carron. 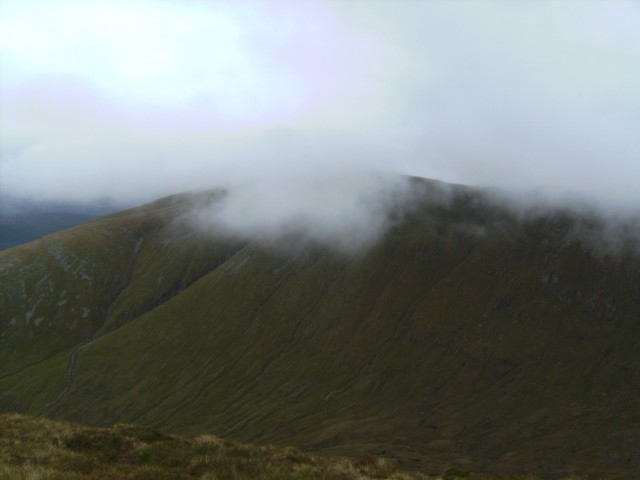 looking back to SnC summit N across the Glen NW across the Glen

After a tiring walk along the boggy E bank of the stream, I reached the car park without sight of the bull. I then had a drink and change of footwear and discovered I'd lost my keys. After nervously turning the car inside out 3 or 4 times I found they'd fallen into the spare tyre well. Following a silent prayer I set off back to Torridon, stopping to enjoy a view of Loch Maree.