I set off pretty late (12:45pm) from the Victoria Bridge carpark having had a bit of a lie-in and lazy breakfast before the drive up from Midlothian. It was still and warm and I was glad I hadn't overpacked. There is a nice walk in to the foot of these mountains giving fine views to the hills on the E side of Glen Etive and Glen Kinglass. The first couple of km could have been biked but this is probably not enough of a time saver to be worth the mess in my car! With the cloud level well above the summits I had a great view of the challenges to come - Stob Ghabhar was particularly impressive. I followed the path along the Allt Toaig to the point where it splits - one way heading up SG, the other up Stob a' Choire Odhair. I had intended to go anti-clockwise but could see some interesting possible scrambles up SG so crossed the Allt Toaig and headed towards the impressive waterfalls of Creag an Steallaire. For pretty much this whole ascent there is as much or as little hands and knees stuff as you fancy. Some of it is pretty serious - beyond my abilities and probably verging on rock climbing (I had to carefully retreat a couple of times). 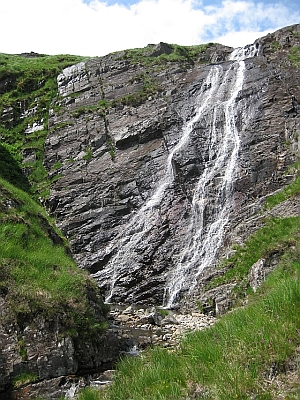 However, I did as much as I could by heading straight up the rocky streambed into Coire na Muic. Entering the corrie I wanted to continue my fun and clambered up the stream towards the head of the corrie where there was a sizeable deer herd grazing on the steep side walls. From here I headed steeply up the W side of the corrie to rejoin the "proper" path next to a line of broken down fence posts (they do seem to get everywhere!). Another 1/2 hour got me to the impressive summit of SG. There were fantastic views in all directions, particularly N over Glen Coe and towards Ben Nevis, and E over Rannoch Moor. I could see the route to SaCO but it looked pretty steep - I wasn't wrong! I traversed the ridge between the summit and Aonach Eagach - it is fun and not long but would feel pretty exposed in windy conditions. At the end of it I crossed grassy slopes for about 50m until I found myself peering a little apprehensively over the steep drop to the bealach. I could see no clear path so gritted my teeth and started slowly down the steep slopes avoiding as much of the plentiful scree as I could. This is probably not a descent for the faint hearted - I made sure to take my time and plot my route as sensibly as I could. The gradient eases near the bottom and, once there, I took the time for a proper boots and socks off break. I was feeling a bit tired (my legs will testify to the steepness of the descent today!) but knew that the hard work was done. I set off again up the much easier slopes of SaCO and reached the summit in about 40 minutes. SG again looked impressive as did Rannoch Moor and the munros hugging the West Highland railway line. A glance to the S showed a heavy shower approaching so I headed downhill at double speed to get as far back as I could before getting wet. The path zig-zags down the crest of the hill to rejoin the Coire Toaig path where I met the rain. It was actually quite refreshing - this had been a tough and warm walk and I didn't mind having wet shorts as the shower passed and I walked the final 3.5km back to the car trying to avoid getting clegg bitten (not entirely successfully!).

I found this a pretty hard walk and it would almost certainly be easier (but not necessarily better) to do it anti-clockwise.
Pros & cons of clockwise route:
Pros - good scrambling (in dry conditions) on ascent, climbs the higher peak first, easy descent off the 2nd munro.
Cons - long and tough ascent, very steep descent to bealach.

Sounds a very interesting walk. I have not done Stob Ghabhar. How long did it take you or did I miss that in your report.

7 hours total but I pretty much ran off the 2nd munro. With an earlier start I would have been nearer 8 hours.