These hills had been on my radar for several months ever since I had tackled An Socach from Baddoch in deep snow on a stunning day in January. So, when my wife decided she was heading off to visit her sister for the weekend, the dog and I seized the opportunity. The plan was to head up to Inverey on the Saturday afternoon and then walk in through Glen Ey with an overnight camp somewhere around Loch nan Eun. Depending on weather and time, we would either scoot up GT before nightfall or tackle it first thing in the morning, before doing Carn an Righ, Beinn Iutharn Mhor and Carn Bhac.

Well, I obviously spent too much time faffing around in the house and cooking up the chilli con carne delicacy as it was 4pm on the nose by the time I pulled into the car park at Inverey. Off down the glen we headed with thankfully not a sheep in sight so Lucy had the run of the place. We passed plenty of people heading back out, most of them on mountain bikes, and while I enjoyed a couple of brew stops, Lucy splashed happily in the river. Looking up Glen Ey to Altanour and Beinn Iutharn Mhor beyond

I had half expected to find a tent or two pitched at Altanour but the place was deserted. I realised by now that making Loch nan Eun for beer o’clock was probably not going to happen, especially with the OS suggesting that the going could be quite hard down between An Socach and Beinn Iutharn Beag. A quick scout around the ruined lodge suggested it would make a decent, clean camping spot but I was undecided. In the end I decided to press on but had only gone another 1k or so when I came across a fine spacious patch of flat grass in a sea of heather above the river and decided to call it a day. Campsite with sunset on BIM I awoke with the larks at 5 and after a cuppa and bacon roll, packed up for 6 and headed over the heathery moor in glorious morning sunshine towards the north eastern slopes of BIB. As I had suspected, the going under the southern face of An Socach was extremely arduous and to make matters worse, the weather started to deteriorate with mist and fog beginning to close in. I started to wish that I had gone in over An Socach and come down off the southern slopes instead of plodding through this interminable mire of heather, peat hags and spongy bogs. The mist continued to close in and the temperature started dropping and still no sign of the loch! Eventually the screeching bird noises indicated that I must be getting close and gradually the loch began to emerge from behind swathes of mist. At this hour on a Sunday morning with the mist swirling, the gulls screeching and no suggestion of another human being for miles around, it is a hauntingly atmospheric and eerie place. Still no sign of GT from behind the swirling mass of mist and fog, but we plodded on along the western shore and finally reached the foot of the north eastern ridge. The pack was swiftly dumped and only one or two essentials pocketed for the haul up to the summit on a now clearly developing narrow path. Eventually we picked up the line of old fence posts which lead right along the lip of the coire and up along the narrowing ridge to the summit. As we approached the summit and the trig point loomed out of the mist, something caught Lucy’s attention and she shot off. I could just make out some shapes moving in the mist ahead and realised it was a group of about a dozen sheep who quickly plunged down the slopes into the coire and disappeared from sight. 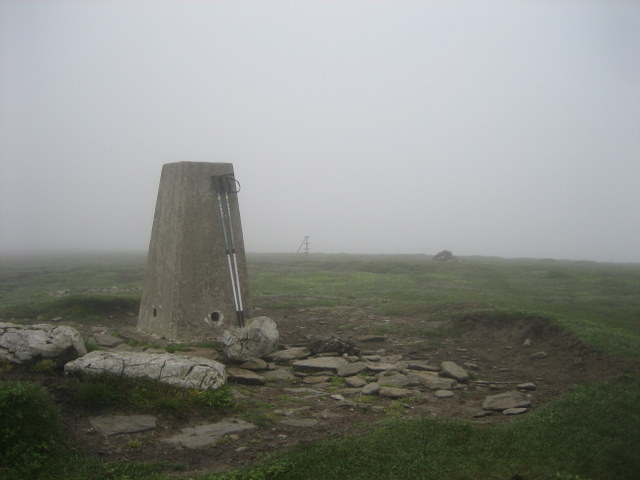 Not much to see up here so we quickly headed back down to the pack and continued along the marked path to the bealach between Mam nan Carn and Carn an Righ. By now the weather had really cleared up and with the pack again abandoned, Lucy and I set about CaR. Carn an Righ from descent of Glas Tulaichean Beinn Iutharn Mhor from slopes of Carn an Righ

50 minutes later and after a rather blustery 5 minutes at the summit cairn, we were back at the bealach and brewing up. Heading up over the shoulder of Mam nan Carn towards BIM, I heard voices behind me and saw two guys approaching the bealach behind me and heading up CaR – the first humans I had seen since before Altanour Lodge the previous afternoon. The climb up onto the summit plateau of BIM presented few difficulties but my legs were just beginning to feel a little heavy. At the cairn at the eastern end of the ridge I bumped into another guy who had come up from the other side. He was heading on to Carn Bhac but my legs were beginning to feel very heavy so I decided to leave that as a little piece of unfinished business for another time and headed off down the steep grassy northern slopes of BIM and back into Glen Ey. The going here was pretty tough and I was very glad to get back to Altanour for a spot of lunch before a swift march back to Inverey on feet that were really beginning to feel every step! I’m thinking the trusty old Scarpas maybe need renewed! Back at the car at 3pm and not a sign of Lucy in the rear view mirror all the way back to Perth!

Don't worry about leaving Carn Bhac. It can be easily done on a short day from Inverey via Top of the Battery instead of Glen Ey - a good one for a 2nd day of a trip when the legs can't do another long day! Not that there is anything wrong with going back to Altanour - it is a wonderful wild and beautiful place.

LeithySuburbs wrote:Don't worry about leaving Carn Bhac. It can be easily done on a short day from Inverey via Top of the Battery instead of Glen Ey - a good one for a 2nd day of a trip when the legs can't do another long day! Not that there is anything wrong with going back to Altanour - it is a wonderful wild and beautiful place.

In particular for the photo of Lochan nan Eun.

A colleague, who was a piper of some renown, loved that place.

I've been there a time or three and know why!

Can I ask what your tent is? How heavy is it? I'm thinking of getting something small and light for some walks this Summer. Also, how big is your sack? I currently have a 40l Vango, don't know if it'll be enough for a tent etc.

Glad you liked the report Benno!

The tent is a Vango TBS Micro 200. It actually belongs to Outdoor Ed at the school where I work and having stolen it for the summer holidays, this was the first time I had it out (so I'm afraid I don't know what it would cost you). I also have a bigger Vango Spirit 300+ which has an awning the size of a small hotel and is superb for car boot camping but although not too heavy, is a bit bulky and excessive for a gig like this one. The 200 was dead simple to put up and take down and was absolutely fine for one man and a dog, although it could be a bit cramped with another person and pack in it. The awning area along the side is also quite tight. As for the pack, I have an Osprey Mutant 38 litre which I can have packed to the brim and barely know I've got it on. A friend recommended Osprey and he wasn't wrong. I use it for lengthy day trips where despite having no tent or sleeping bag, I still want to carry a lot of gear of one sort or another. On this particular trip I used an old Vango Sherpa 65 litre which has been round the block (not to mention the world) a few times and taken some abuse in it's time. It is slowly coming apart at the seams and I have a feeling it may soon be replaced with an Osprey of some sort.