Last week daughter and I climbed Stob a' Choire Odhair but left Stob Ghabhar for another day. Friday July 1st was that day and we set off nice and early with the promise of improving weather from MWIS. We criticise this service all too readily in my opinion and on this occasion the forecast was entirely accurate. We debated which route to use to achieve our goal, direct up past the waterfall and then follow Stob Maol ridge and the fence posts to the top and return the same way. On the other hand we could head straight up Coire Toaig to the col at 668m then follow the path over the AE ridge to gain the summit and return by the waterfall. Despite our fears regarding the reputed exposure on the AE ridge we felt it would be a pity to miss it and so we chose the latter route knowing that we could always retreat if we started to feel uncomfortable. As we started the walk the skies were overcast with cloud just touching the tops and the midges were having the occasional nibble. As forecast the cloud cleared most summits as the day progressed. Turn right at the green hut and we're on our way. Pretty quickly we were crossing the ford and heading up Coire Toaig on a good path gaining height fairly quickly on an easy gradient. Although the path was dry - more or less- the boggyness of the Coire was fairly evident. Suddenly we were on the bealach where great views opened up.

Then, unknown to us, it was off to the hardest bit of the day although we were compensated by the views of Coirein Lochain and our objective. We also got our first view of the AE ridge which we both felt would be quite intimidating.We were quite oblivious to the fact that our current challenge would be much more demanding than anything else on this walk i.e the steep ascent through scree and large rocks on a path which is sometimes non-existent with quite airy and intimidating views to the lochan below. Coupled with this was the uncertainty of navigation each time the path disappeared - as it happened we were spot on. However it was indeed a great relief when we finally arrived at the top of this particular part of the walk. So then it was on to it, the AE ridge. It was pleasant walking along towards the (imagined) threat which is not visible until you are at it. Daughter held back even before it came into view - "you go first dad and tell me what it's like". On first sight I could not believe how easy it looked and thought the real one must be up ahead but could not imagine where. A fleeting thought crossed my mind -'are we on the wrong hill?' - not possible!!. Anyway I told her it looked like a real doddle - hands in pockets job- easy. Greatly relieved she approached with some trepidation in case I was kidding and exclaimed "that can't be it dad - it's too straight forward - lets get a few pics to put it in some sort of perspective". "OK" said I and here are some of the efforts. I can only imagine that this ridge will be a very different proposition in bad weather however today it was quite benign. I hope my pics give some idea of how it was TODAY.With the AE behind us it was easy all the way to the cairn. 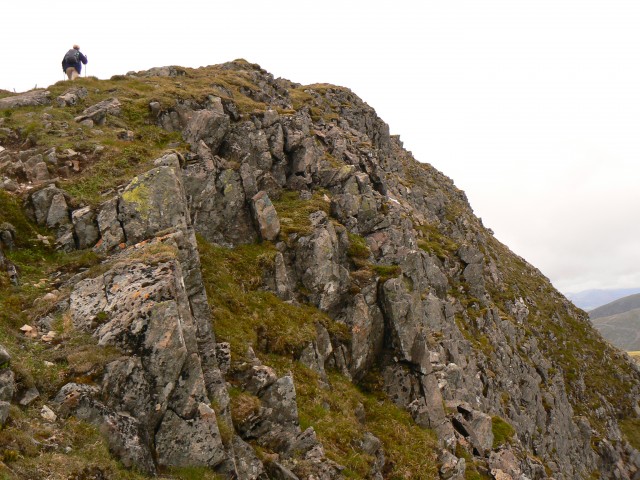 On top it was the ususl - a rest, a drink, something to eat a good look round and a feeling of achievement. Twenty minutes on top and it was time to go home - follow that fence line! 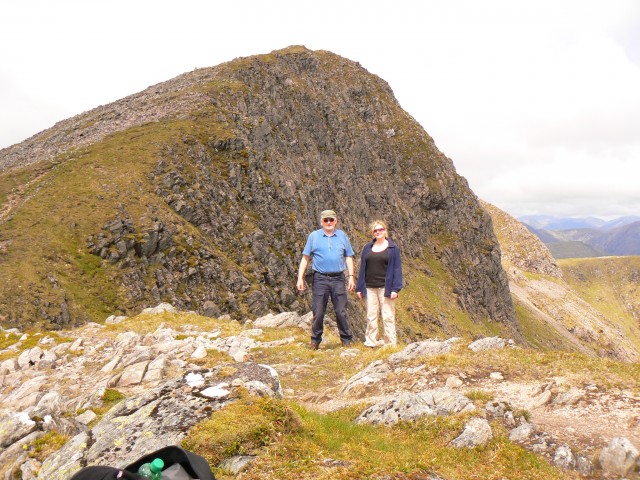 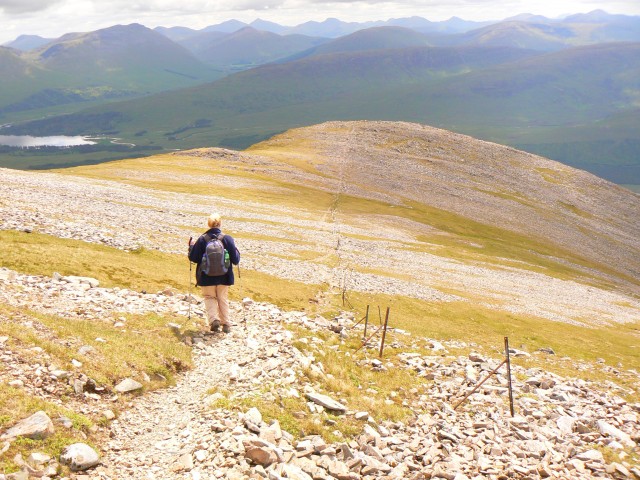 When we got to the waterfall the path was naturally quite steep but there are great views of the tumbling water. Finally it was into a small wooded section and a burn to be crossed on stepping stones (must be difficult when the burn is in spate) which was easy and brought us back onto the outward path and back to the green hut. 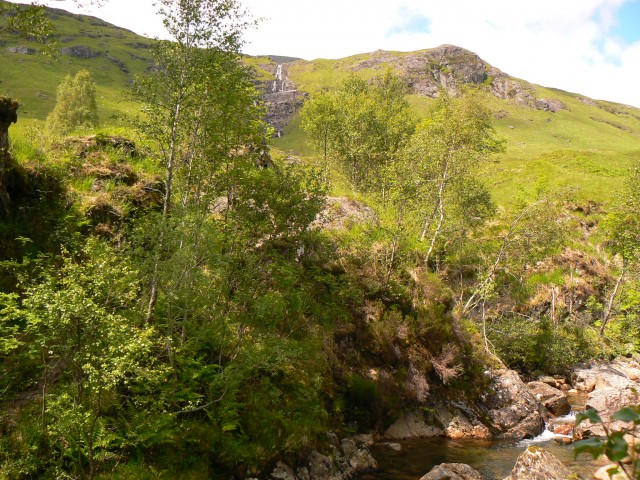 Half an hour later we were back at the car and happy to get the boots off - JOY - and off home where the little lady had dutyfully prepared a splendid meal washed down by copious quantities of my favourite beer. Life is very good!!!

Cheers and good walking y'all Good report Oldman. Stob Ghabhar is one I'd like to go back to - will probably avoid going up the flank of the AE ridge next time tough.

Well done guys,
Excellent report and good pictures of the mini AE ridge. Looks like you had a realy enjoyable trip.

Great report of as good hill. I think this will be the only AE ridge I walk in the Highlands

Fab report with some nice shots.

Cracking couple of hills these.

Lot of family reports being posted, all good.