Heaven and Hell in the Cairngorms

Heaven and Hell in the Cairngorms

With the clock fast approaching 5pm on friday night i still had no 100% fixed plans of where i would be walking on the saturday,cue a conversation on the forum that throws up the possibility of me going for my original plan of five Munro's in the Cairngorms with a wild camp on the friday to ease the length walk on the saturday,so after popping in at home to grab my kit i set off for linn of dee carpark at 6pm
I arrived for 9pm,got all my gear packed (had bundled everything i needed into the van at the house) and set off on the bike along a nice track to Derry Lodge,reaching it in 30 mins.This is where i made a big mistake although it never comprimised my safety,i was due to walk onto Derry Cairngorm and over to Loch Etchachan to camp but i cycled all the way to the start of Carn a Mhaim instead and duly started to ascend on the decent path. first view of Carn a Mhaim

Just short of the summit and with light fading fast i decided this would be as far as i would go and found a nice grassy area to set up camp at midnight. 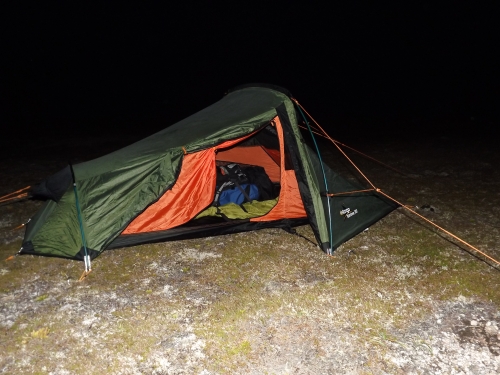 camp for the night

After 4hrs restless sleep i awoke to a lovely morning sky and a stunning view of sunrise coupled with a cloud inversion all around me,after taking in the views i had breakfast and packed up,full of vigour for the day ahead. 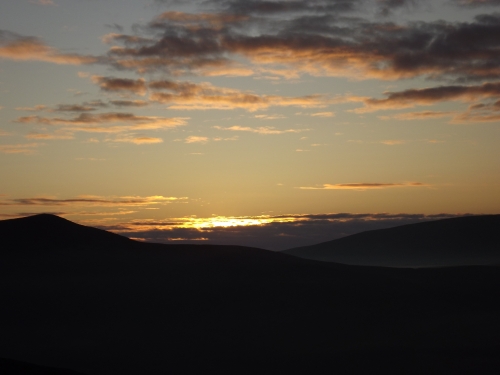 Off i set and very quickly i summited Carn a Mhaim and i have to say i was blown away with the views over to Devils Point from here,especially with the cloud inversion in the Lairig Ghru so lots of pics taken 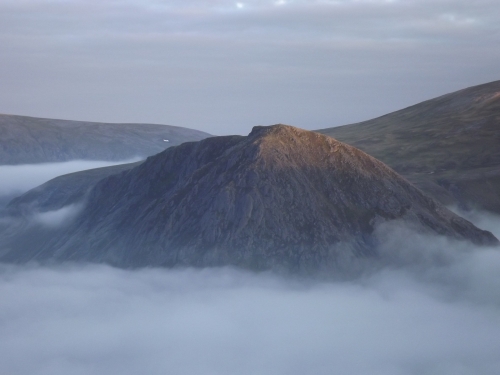 i set off for Ben Macdui knowing that the route error the night before was going to present me with a tough climb up to the second summit of the day,especially with the extra weight in my pack. I made good time and two hours after leaving Carn a Mhaim i reached the summit of Ben Macdui,a great relief and i was still feeling fresh which was great as i could now see all the way over Beinn Mheadhoin out to Bynack Mhor,my next destination. 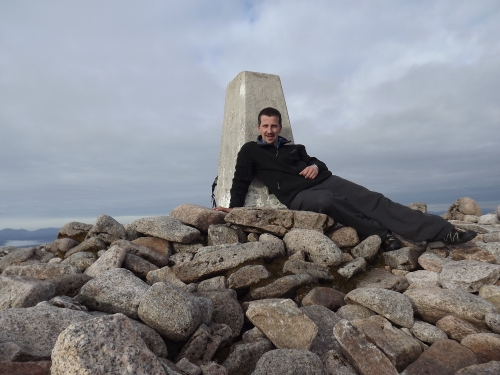 I followed the path off of Macdui all the way down to Loch Etchachan and decided i would leave my pack here,take some water and food and continue out to Bynack Mhor first via Loch A'an and come back over Beinn Mheadhoin on the way to Derry Cairngorm.The route down to Loch A'an is steep on loose stones and gravel but once down the beauty of the Loch became apparent 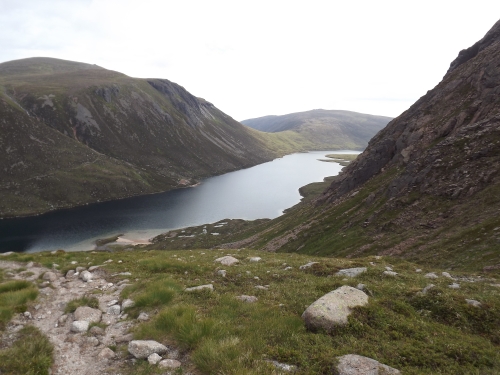 i continued to the north side path which i have to say involves lots of rock hopping rather than easy walking.This part of the walk soon became tiresome and my body was beggining to show signs of lack of sleep but i continued on and was glad to finally pick up the path up to Bynack Mhor only to be hit with 3 false summits and when i reached the 3rd and looked to see Bynack's summit was still 2km away my heart sank,any energy i had left seemed to drain straight away and i knew from here on in was going to be very tough going. 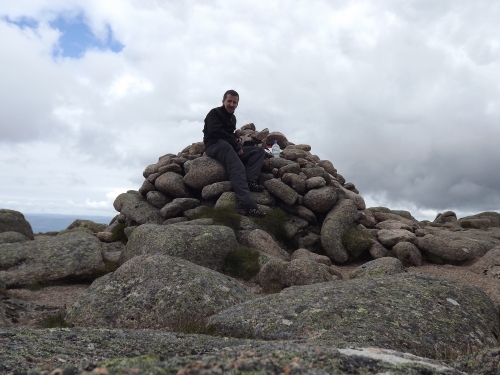 I sat on the summit pondering the fact i was still about 15km from the bike,2 mountains still to go and also that i was mentally and physically exhausted,i could fully understand why this hill is climbed on its own from Glenmore lodge and would never ever recommend including this as part of a circuit.Dont get me wrong i had options......i could head off the hill to the stepping stones at the fords of Avon refuge,walk along the side of Beinn Mheadhoin then head west and be back at my bag,head east from there and walk out down Glen Derry but i would have been miles from my bike and it would also leave another trip to bag Mheadhoin and Derry Cairngorm.I decided that as i was here i would complete my intended route,yes it was going to be hard going but i would be cursing myself right now had i backed out of the last two hills so off i trudged aimimg pretty much straight for Beinn Mheadhoin, 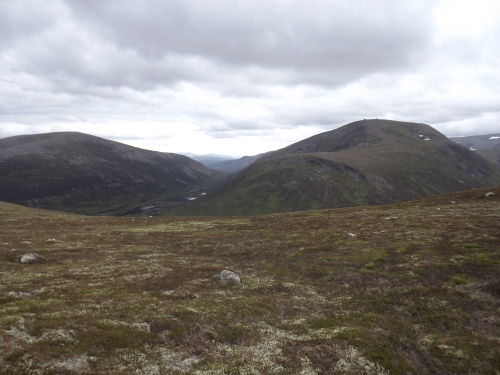 down the steep,heathery hillside to the river which normally i would have taken time to cross but i just waded straight through,caring not a jot about wet feet/trousers and then started the torturous climb up Beinn Mheadhoin,i stopped 5-6 times on this ascent and was very relieved to eventually arrive at the summit,which i climbed up onto and had a good rest,trying to convince myself that i was nearly there and the majority of the hard work was over with only Derry Cairngorm left to summit standing on summit of Beinn Mheadhoin

After 20 mins i left the summit and headed back down to Loch Etchachan where i collected my extremely heavy bag that i had left 5 hrs previous and continued up to Derry Cairngorm,still struggling and at a very slow pace but i got there eventually and now my only thoughts were to get back to the bike and then to my van. As i had left my bike in the wrong place the night before i had to descend the west side of Carn Crom which was steep and very boggy but with the bike getting closer and closer i didnt really care and soon enough i was cycling back to the van,overjoyed by the sight of the forest which houses the car park

Overall i am really happy that i eventually managed to complete the route but 11.5 hrs of walking in one day after 4 hrs sleep was not good at all and i'll certainly not be taking on any more big routes like this again,having to push myself through the last 6 hrs was horrible and really took away the pleasure i get from walking the hills.

My lawyer will be in touch over title Copyright.

I'm sure you can think of a suitable royalty though...

Well done Ian, sterling effort after messing up your route.

All i can say is that we learn from these situations, so don't let it put you off doing big routes.

My 2 friends did 6 munros near you on saturday and it took them 17hrs 50mins, they drove from fife in the morning.
They also made a mistake and had to retrace steps to bag a summit.

Perhaps a good kip at home and the usual early drive may have helped you.

Great stuff though, another madman joins the ranks of the insane hillwalker

Hi Ian, well done on bagging the 5. I done the 5 from Cairngorm ski centre (cairngorm instead of Carna Mhaim) a much nicer route I think and not as long. I thought you were a bit aprehensive on your chat on Friday but you certainly dug deep to complete even though you had an opt out route if you wanted it. Top effort. I expect you can't wait for your next walk

Looks like it was a lucky mistake with both the camping and the scenery in the morning.

tbh, you're 'exhausted' sounds like me going full speed on a good day.

That looks like some view to wake up to

. Having just done a decent length day in this vicinity (though nothing compared to this), I can vouch that the combination of ascent and distance really takes it out of you. So great effort on completing your route

Nice one !
Cool to see your Banshee in action !

A fine big route in a fine part of the country. Nice one