Ah, July! A wondrous summer month, and also the month when I get 2 summer weeks off this year!! The bad news? Not until the last two weeks do I attain that holiday freedom!

For now though, It's a normal wekend and I have decided to head to Assynt for a bold attempt to ascend Suilven. I thought it would be cool to look south toward Stac Pollaidh, the previous week's climb!

So, it was again 4:00 am when I left Nairn and headed down the Ullapool road once again. Driving as non-stop as is possible for a snap-happy sod like myself, I arrived at Lochinver around 6:40 on a fairly clear, but overcast morning, and promptly missed the turn off for Glencanisp Lodge. I found myself instead, heading up the road to Inverkirkaig!! After briefly toying with the idea of doing Suilven from there, I decided to stick with the original plan, (and the Walkhighlands route notes!) and head back to find the correct turn. I parked the car in the small parking area, (I was the only one there) and set off at almost exactly 7:00 am, and was quite surprised to reach the lodge fairly soon. I had thought it would be further off! The stalker's path is indeed a good one, and the prospect of a lengthy walk did not deter me from my mission. Since I was aware that I was combining a long walk with a potentially strenuous hill-climb, my mind was set on the goal and I was not too bothered, given the good condition of the path. However, unlike the seemingly endless path as it turned out, I will try not to meander over this report. Let's just say that I was ever so glad to see the cairn marking the turn off across the bog to the base of the gully! The fork to the left for Suileag Bothy 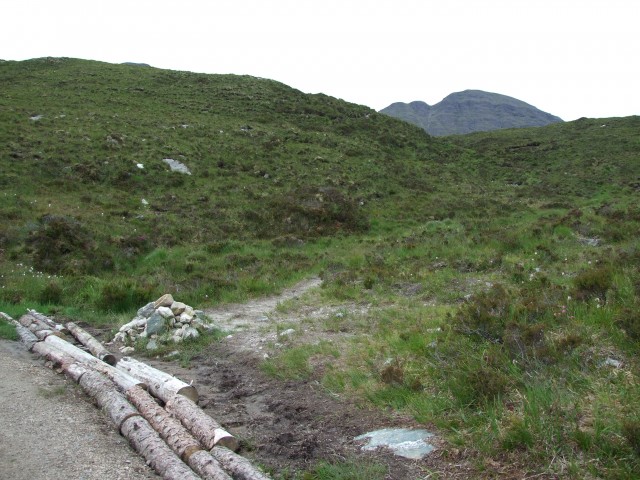 The cairn marking the turn off the path.

It's quite a heavy slog across the boggy ground to the base of Suilven really, and although I was lucky that recently dry weather made for a fairly trouble free approach, I still found it hard after such a long walk in. Erosion too, causes problems whilst negotiating the pathway here. It would be easy enough to stray off the "path" and although there would be no possibility of getting lost, one could add unnecessary length to an already long haul. Passing between the two small lochs to the base of Suilven, I stopped for a well-earned cup of tea and a sandwich before I took stock of what lay ahead. I congratulated myself on having completed a very long undulating route to this point. Looking up the gully!

The first close-up view of the gully ascent is indeed, very intimidating. And standing at the bottom, you can't really define the route up. In fact, at first it doesn't look as if there is any clear path or route at all, and it's only when you start out towards the base of the gully itself, that you see and discernible pathway up it. The ascent of the gully though, is relatively easy in the end. It is very steep, and care should be taken in parts where erosion and loose rocks can cause problems underfoot. As I continued the gradual climb to the ridge, I stopped often, (as usual) to rest and take in the views which widened with each few feet and became more glorious as I progressed. The view North-West with Quinag on the right

I found the gully climb very enjoyable to be honest. And the views back across the glen towards the lodge were spectacular as they emerged. But nothing prepared me for the views that were to greet me as I reached the ridge! The scenery as I peeped over the clay footpath on my arrival at the top of the gully can only be described as wondrous! My first view from the ridge!

I took some time to take in the views, and I honestly didn't know where to point the camera! The landscape was nothing short of breathtaking, and what a pleasure to see the broad views of Assynt and Coigach from such a viewpoint!! Of course, I wasn't finished yet, these heart-stopping views were just the start as I pressed onwards and upwards to the "true" summit of Caisteal Liath. Stopping briefly to examine the oddity of the dry-stane dyke, I carried onwards via an invigorating semi-scramble to the summit cairn! The oddity with the view back towards Lochinver beyond! Looking back along the ridge to Meall Mheadhonach After various self-timed photo-ops and a cup of tea with my lunch, I took a little time to sit and absorb what I had achieved. The long slog in had been worth it, and here I was on the summit of Suilven. The sun had come out and I had the whole place to myself!! The gorgeous views were just too much to take in really, and it was indeed very strang to think that I was now looking back from the view I had the previous week from Stac Pollaidh!! Wonderful!! Time and again I took in the 360 degree views, wondered at the distances I was perceiving, and for just the briefest of moments I found myself literally awe-struck and not a little terrified to be standing on this iconic plinth, alone!

I felt a little bit of trepidation at the thought of the descent. After all, it had been a precipitous journey from the base of the gully and further on to where I was now. But I needn't have worried. The descent was short and sweet and I was down in no time. Half way, I met an elderly gentleman on his ascent. He told me he hoped to make it this time, as he had tried last year but had to give up due to cramp. A real pity because he'd actually managed to get beyond the dyke on that attempt. Still, after a brief chat, I wished him well and continued down, looking back up at his progress from time to time. I'm sure he would have made it given the conditions.

More folk were encountered as I crossed between the lochs towards the stalker's path. Each in turn asking "how was it?" or similar. I told them that the views would literally take their breath away and that although it was a tough climb, it was an enjoyable and relatively short one. A last look backwards to where I had been to, and I was on my way to the hardest part of the whole outing - the walk back along the seemingly endless path back to the lodge! I'd love to tell you that I completed the climb by walking the length of the ridge and scrambling up Meall Mheadhonach, but I didn't! I'm not mad! I loved every minute of it, but fool-hardiness is not one of my traits.

I'm not ashamed to say though, that I was close to collapse by the time I reached my car again at 4:00 pm, (almost exactly 9 hours later) and even the last few hundred yards from the lodge to the car park seemed like a million miles! I even considered finding a B&B in Lochinver and staying the night, but after a brief rest, decided to drive the hundred miles home again, satisfied with my achievement

Sunburned and sore all over, dehydrated and weary, I had combined a long walk with a memorable and most enjoyable climb. The following photo sums up just what it was all about! 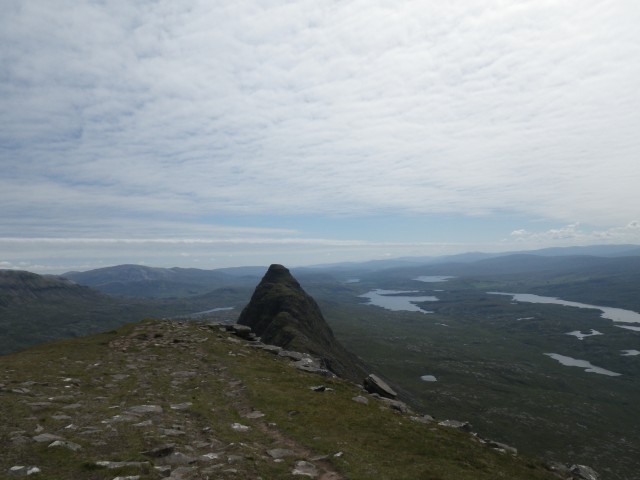 Oi oi Jakeyboy, that's some report!! So happy that you managed to pack so much into one day(despite your dodgy start!!)

pollyh33 wrote:Oi oi Jakeyboy, that's some report!! So happy that you managed to pack so much into one day(despite your dodgy start!!)

Thanks Polly! I had a great day, but jeez was it a long walk

I'm still suffering! Keep filling up wi them Magners and you might see allsorts tho!

Great report. Suilven looks a fantastic mountain and one on my "to do" list if I get up there again. I was up that way last week and the view I got of it from Stac Polly was amazing, as was the view in all directions.

colgregg wrote:Great report. Suilven looks a fantastic mountain and one on my "to do" list if I get up there again. I was up that way last week and the view I got of it from Stac Polly was amazing, as was the view in all directions.

Well I can certainly recommend it colgregg. Best views I've seen yet!

A fine read, enjoyed that. Fantastic you got the mountain to yourself - what a buzz.

You put lots of effort in but got your rewards.

I love this area, scenery is stunning.

Enjoying all the Assynt reports of late,well since arriving back for there 2 hrs ago

I never tire of Suilven reports.