At the last minute we decided to make this a backpacking trip – what a great decision! If we had done these hills as two separate days we would have missed the best bit – the ridge above Coire Domhain. We had a late start after the 4 hour drive to Glen Affric and were glad to be stretching our legs on the walk up Gleann nam Fiadh. After about 2km a narrow path leaves the main track and heads across a bog – don’t go that way! – carry on to the foot of Beinn Eun and take the decent track that goes northeast under the crags. Once beyond the crags we climbed very steeply up to gain the broad south ridge of Toll Creagach. 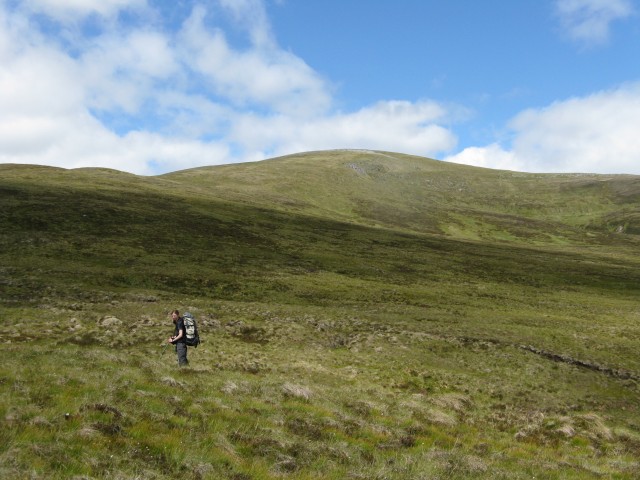 This seemed rather never ending but was made more interesting by the discovery of a clutch of ptarmigan eggs in a neat little rocky hiding place and the sighting of a couple of mountain hare. The summit afforded great views of Loch Mullardoch and its Munros. 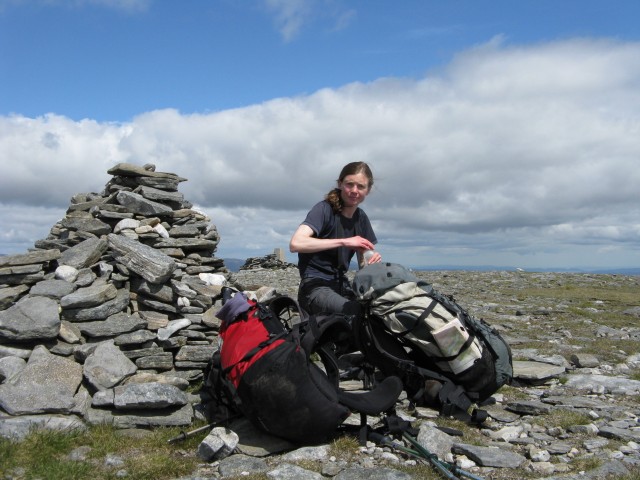 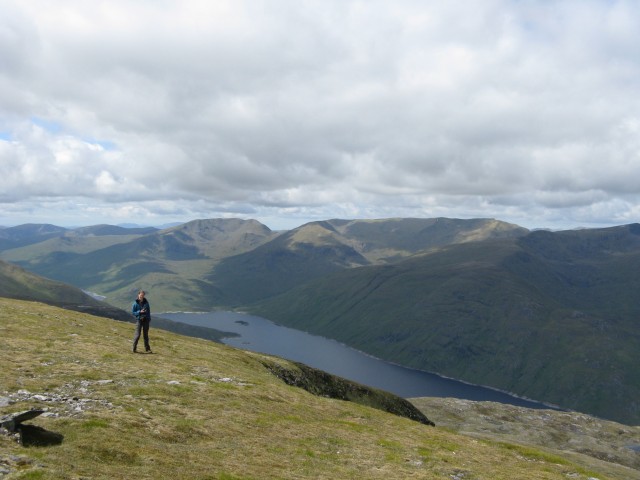 This was followed by a long descent to Bealach Toll Easa and then a much more interesting ascent to the summit of Tom a’ Choinich. 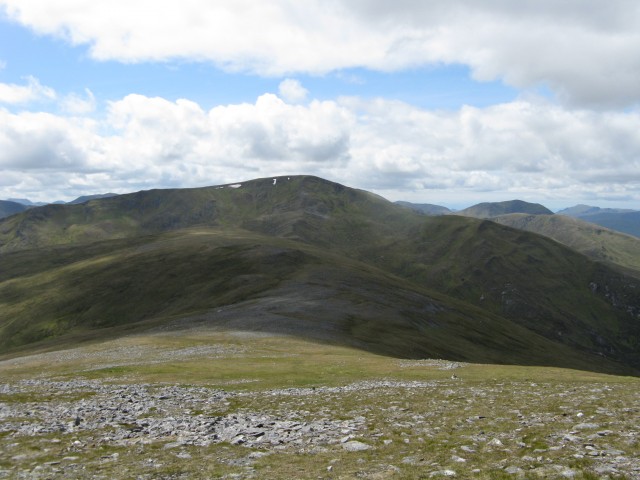 Then the best bit of the day – the walk around the rim of Coire Domhain to Carn Eighe. 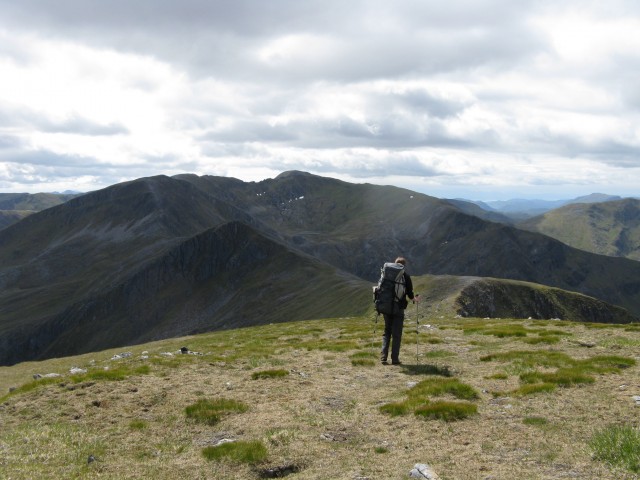 On to Carn Eighe

First there were the impressive cliffs of An Leth-chreag, the stiff climb up to top at 1131m and then the magnificent corrie itself with its lochan. 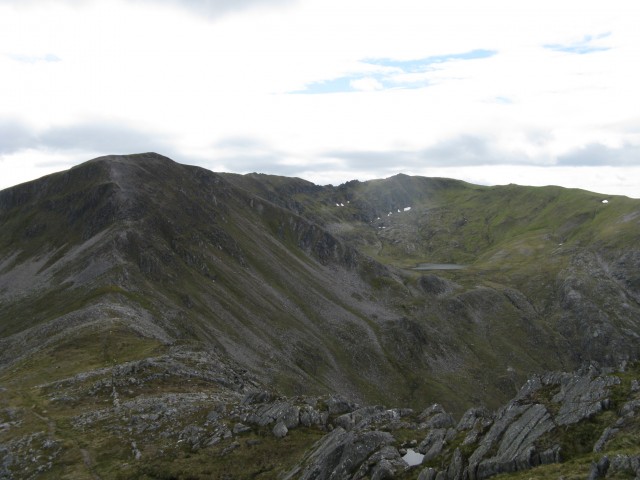 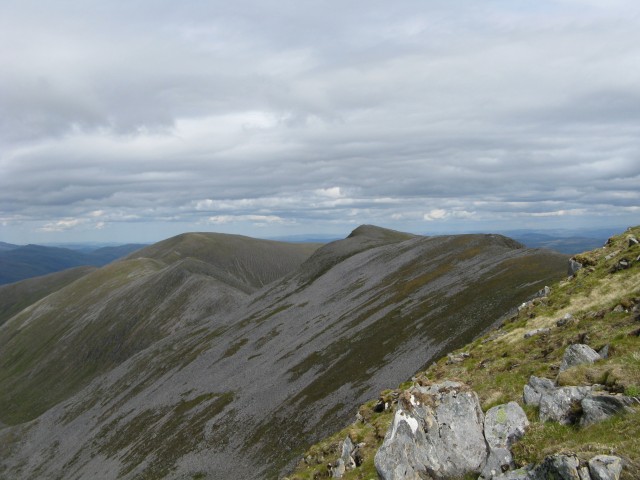 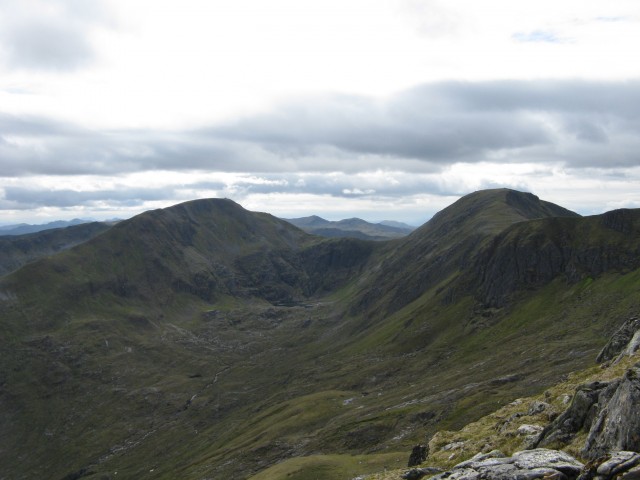 Above the lochan the ridge narrowed and there was a bit of scrambling to be had over some rocky pinnacles (if you weren’t carrying camping gera that is!) 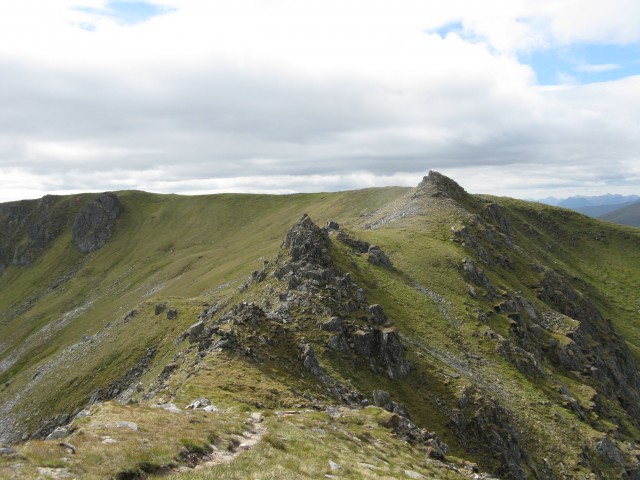 before gaining the broad plateau that sweeps round to the summit of Carn Eighe. Brilliant. To the north we could see Beinn Fhionnlaidh 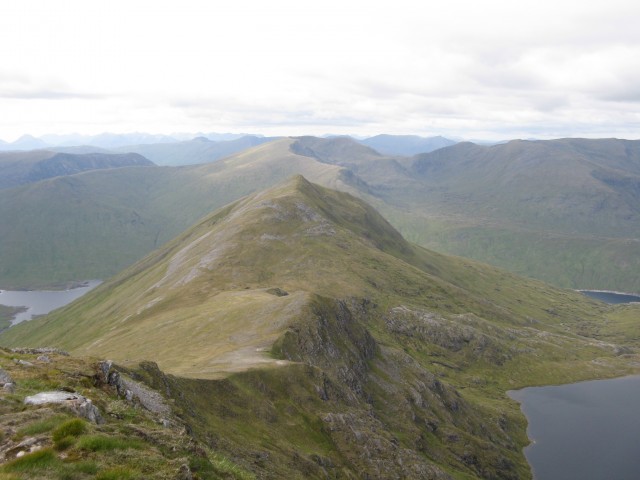 and we headed in that direction. We found a good place to camp on Bealach Beag with a small burn trickling down the hillside nearby. 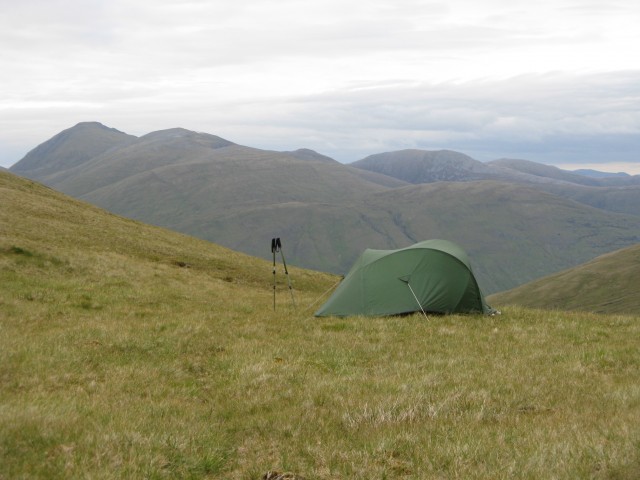 “I bet there’s nobody else for miles” I said. Then as I went down for water for the soup I noticed another tent about 50m away! So much for splendid isolation!
After dinner we strolled up Beinn Fhionnlaidh, glad to be free of our rucksacks. 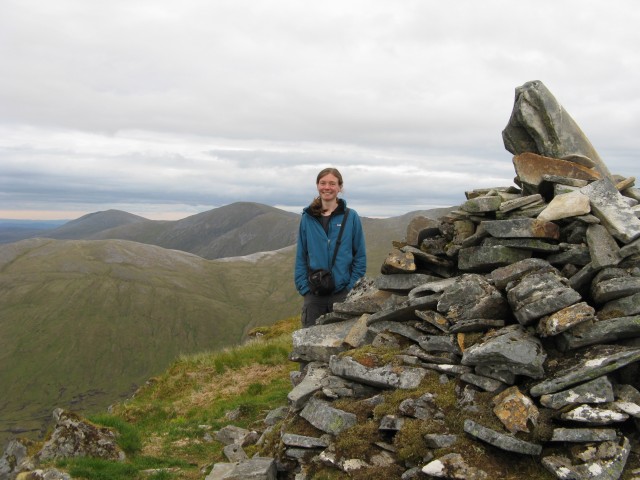 An early start saw us at the top of Mam Sodhail by about 8.30am. 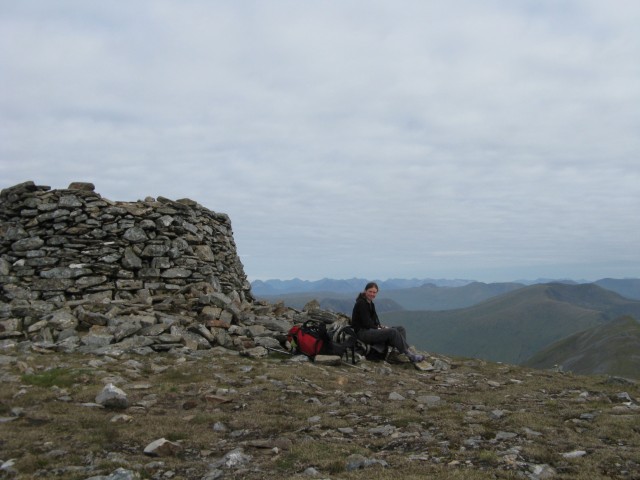 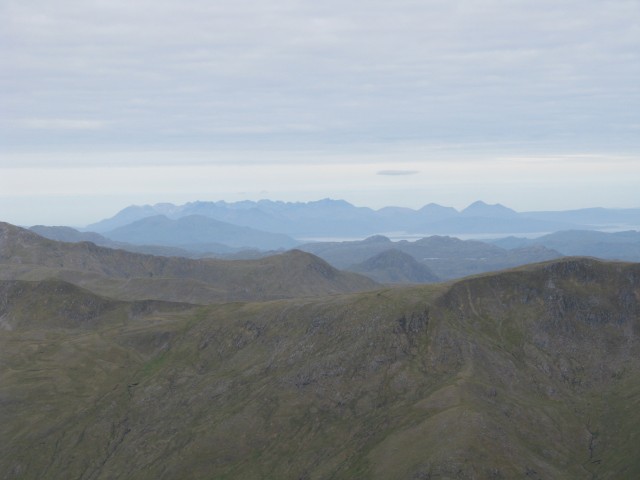 We didn’t go back over Carn Eighe but contoured round on the west side to reach the bealach above Loch Uaine. Then we made for Sgurr na Lapaich down the long undulating south east ridge. There were spectacular views all round. The descent from Sgurr na Lapaich was a bit of a trial – is there a good way down? – very steep, loads of heather, bracken and bog and a deer fence to negotiate before finally reaching the track just west of Affric Lodge. Then it was an easy back along the lochside to the car.

You guys must be up there for most experienced campers on WH. It seems that every other report you guys seem to have the big packs fitted. Ever thought about a mule!!

Another fine report with quality pics.

Haven't got this far yet but this whets the appetite. Great "pinnacles" photo.


In the mid 19th century the Highlands became enormously popular as a sink for the ill gotten gains of the industrial barons. The shepherds who replaced the cleared clansmen soon followed them into history as vast swathes were parceled off into what were in effect private game reserves, a process that has yet to run its course. The new owners often spent large sums of money improving their sporting heritage and had access to a large pool of labour. This was the era of the pony tracks that we find so useful, the great lodges, bridges and the keeper's bothies. Much of the infrastructure we use in the hills date to this time, and some of the most extravagant works are to be found on the land covered by OS sheet 25. (for example the bridge over the Uisge Dubh, and road to Bendronaig Lodge shown at the top of this page).

In the midst of this fashion an American tried to close off Glen Affric and installed a watcher on the summit of Mam Sodhail to keep the likes of us out. Sir Hugh Munro was reputed to have given advice on avoiding him. To his north another American by the name of Winans rented the sporting rights to Glen Strathfarrar from Lord Lovat. Soon he had added Pait and Killillan to his estate and thus gained the stalking rights to a vast area of Wester Ross. This estate was reputed to have employed 300 men, and one of the jobs he gave them was to build a fence from Loch Monar to Loch Carron. Problem, he needed to get a large tonnage of iron stakes and wire up to Pait Lodge. The solution was to lug a boat up to Bendronaig Lodge, sail it down Loch Calavie and then cart the several tons of shipping over to the string of lochs lining the boggy strath to Pait. Some portage. The boat, having played its part in building the 'great fence of Killilan ' was later to sink in Loch Monar,(in the service of Mr Winnans' successor ).

Welldone Bootsandpaddles, a must do route for me during my holidays looks excellent.
Great report and pics thanks for posting

My mate found it here in the section on Beinn Dronaig
http://www.sub3000.com/Section12/Attadale.html