On a perfect summer morning, a fantastic and challenging traverse of one of the best ridges in Wales.

our_route.gpx Open full screen  NB: Walkhighlands is not responsible for the accuracy of gpx files in users posts
After crossing a rather swampy field from the car-park in Rhyd-Ddu, a well-made path makes fairly easy, if a little breathless, work of the long and steep climb up to Y Garn at the north-eastern end of the Nantlle Ridge. The views are already superb from both the ascent and this minor stony summit, but the sight of the razor’s-edge ascent to Mynydd Drws-y-coed to follow clouds them with a sense of trepidation... 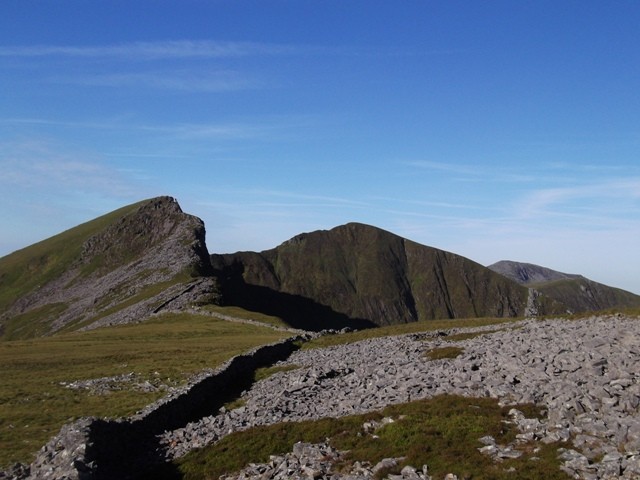 Over Llyn Nantlle Uchaf to the coast from Y Garn

However, at least in the prevailing dry and windless conditions, the scrambling climb – although there are a couple of passages that are very exposed to the dramatically steep drop to your right – isn’t too difficult, almost a path in some places and no really tricky steps (I’d seen it described as higher-tariff than any of the other main walking routes in Wales, but it didn’t really seem so). Really enjoyable stuff though, and over rather quicker than you want as it tops out on the flat summit of Mynydd Drws-y-coed. All of the ridge is really well-pathed, and there’s a lovely curving ascent next to the cliff-edge around and up to Trum y Ddysgl after that. Next of the varied challenges of this route is the very narrow green ridge linking to Mynydd Tal-y-mignedd. Especially while clambering over a ‘notch’ on a rocky little path it’s possible to imagine this being terrifying in a strong wind, but on the right day you’re at the obelisk-topped peak, another beautiful viewpoint, in no time. It’s a very steep and rocky descent to the bwlch from there, but the path finds a pretty reasonable route down as Craig Cwm Silyn – the highest point of the ridge – grows ever larger and rockier-looking in front of you. This is another really interesting ascent, with the route a little less obvious and plenty of steep, half-scrambling options over the bouldery terrain. Obelisk on summit of Mynydd Tal-y-Mignedd Up to here, the route is obviously (and justly) very popular and well-trodden, but it’s hard to see – other than retracing the path – which the right route down is. This one, first quite steeply down over boulders and later extremely so over slippery grass with little to break any fall, was quite unpleasant, and the tramp through the overgrown Cwm Pennant and then pathlessly up to the quarry on the far side little better. The walking improves through the old workings, but there’s still a fair way to climb and when you finally top out at Bwlch-y-Ddwy-elor you feel like you’ve climbed at least one more, pretty big, mountain. A really tough mile or two, but the path down to Rhyd-Ddu from there is a good one to lighten the spirits again, first pleasantly through the forest and then across the fields with Snowdon towering above. Craig Cwm Silyn from the quarry Snowdon from the path back to Rhyd-Ddu

Still quite early and with only a few miles in the legs, time left to tramp up Foel Goch in the Arenigs on the way home. A bit of a contrast to the excitements of the Nantlle Ridge, but not a bad little walk at all.

our_route.gpx Open full screen  NB: Walkhighlands is not responsible for the accuracy of gpx files in users posts
The toughest bit is negotiating a pack of untethered and very aggressive farm dogs at Pentre-tal-yn-y-cwm, seeming rather like a deliberate attempt to put off walkers. They stopped short of actually biting, but you can’t avoid them, and it isn’t a nice experience. After that the path, while apparently (perhaps unsurprisingly...) little-walked, is fairly clear all the way to the round grassy peak of Foel Goch - just about tolerably dry in its lower part by the river and then increasingly firm as it climbs pleasantly up. This is perhaps not the most exciting summit, and wouldn’t be anyone’s favourite, but it’s a nice enough and easy climb with some decent wide views from the top. Back down the same way afterwards, with no clear alternative on the ground, escaping the dogs by means of a sprint and a leap over the gate... Re: The Nantlle Ridge, Foel Goch

Nice report! I love the slanted rocky ridge! Looks like fun! I am really impressed with the Welsh hills. Next time we are in the UK we are going to have to make time to explore. Please please, show me more!