I was up at 6 after a very decent night's kip and quickly got a coffee on the brew followed by a Wayfarer all day breakfast. The coffee was one of the worst I've ever had outside of a hospital. Brewed with lochan water and as I'd forgotten my mug, supped out of the pan. Not good

. I gave Kev a shout and set about dismantling the tent and getting packed up. We were off by 7 o'clock and contouring around the shelf just below the summit of Sgurr nan Coireachan and onto the rocky, lochan and fencepost studded ridge which leads over the tops of Meall an Tarmachain and Beinn Gharbh as well as the unnamed 858m spot height before climbing up onto Sgurr Thuilm. Just having skirted around below Sgurr nan Coireachan 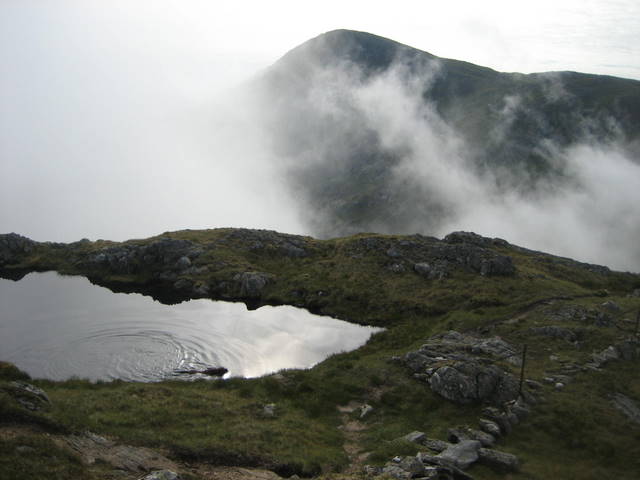 Lucy taking a dip with Sgurr Thuilm behind 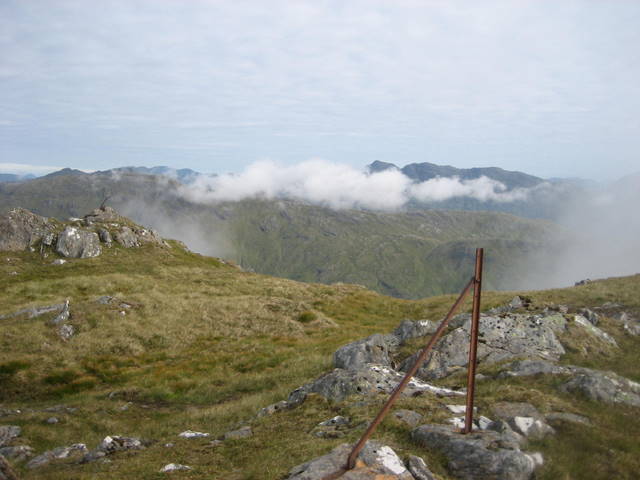 North from the ridge towards Glen Dessarry Back to Sgurr nan Coireachan

We met a solo walker coming towards us just beyond Beinn Gharbh who had spent a night of luxury with the electricity supply down in Corryhully Bothy. It was still early in the day but already the heat was building up and it was a relief to reach the crags between the flat shoulder and the summit of Sgurr Thuilm, where we dumped our packs to travellight up onto the Munro summit.

Sgurr Thiulm is another brilliant viewpoint, maybe not quite as good as Sgurr nan Coireachan but there's not much in it to be fair. Back down at the packs, we see another solo walker coming up towards us from the Druim Coire a' Bheithe ridge. It turned out to be ianaird from this site - bagging the two Munros before catching the ferry back to Skye from Mallaig later that afternoon. The descent east-south east off Sgurr Thuilm turned out to be a killer, especially lower down, and looking back revealed the scale of what we had just downclimbed. But this was nothing in comparison to the ascent of Streap still to come. It looked brutal, even up the relative chink in the armour represented by the wide gulley-cum-coire on it's north face. 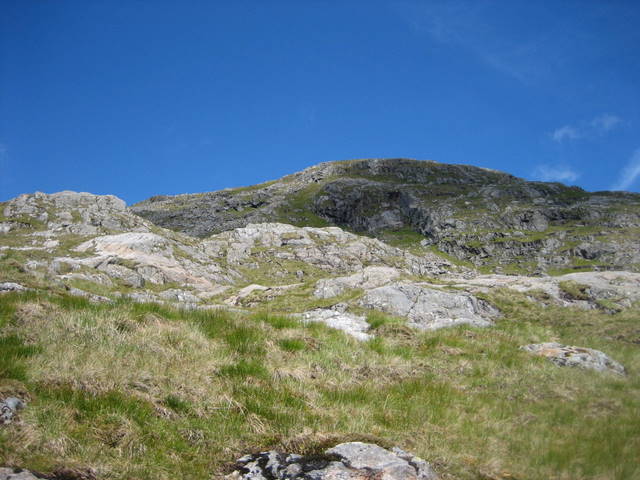 As Kev has already alluded to in his report, if I'd suggested at the foot of Streap that we just head back out the glen to the car, he'd have been quite happy. The thought was running around in my head, but I contained it. Was I right to do so? Who knows! North along the Allt Cuirnean towards Fraoch Bheinn and Sgurr Mhurlagain Start of ascent of Streap I guess what matters is that we did it, and we made it, even if I did spend a good few minutes all out and flat on my back just below the summit. Kev perched on the little arete just below the summit I'd have preferred to go all the way along the ridge and descend down to the car off Beinn an Tuim, but by the time we were leaving the summit, I was aware that time was marching on and this would give us a lot of work still to do, the scale of it being not entirely clear from the summit. I had said that I would be home sometime "late afternoon" as we had friends coming to stay that night, and with the considerable drive down to my car at Tyndrum and then from there back to Bridge of Earn, my cards were probably going to be marked. So when Kev suggested that we use the "curious diagonal shelf" on the NW flank of the hill as mentioned in the SMC Corbett book, I quickly agreed. 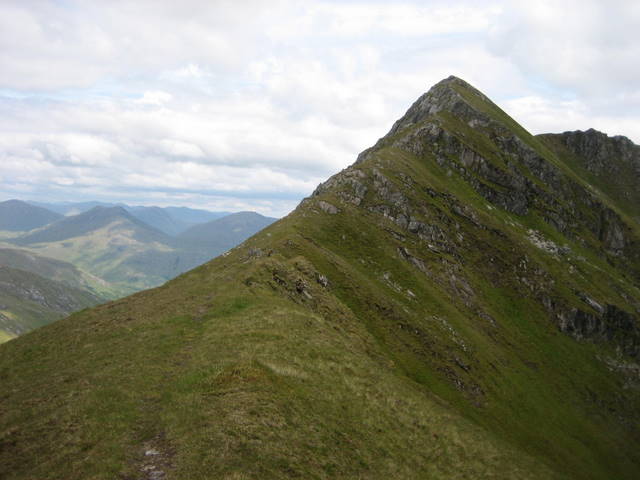 Back to the sharp fin-like summit of Streap

This was by no means a straightforward descent but it did get us back down onto the track a kilometre or so short of the stalker's path junction from last night. The road might have offered easy walking but it was playing havoc with my feet which felt like they were aflame by the time we walked under the viaduct, past the gathering crowd of trainspotters, and arrived back at Kev's car just after 3.30pm for the long drive home to face the music. Is 6.35pm late afternoon??? Not even open to interpretation???

Good to see you getting out regular now GD.

Aye, but you've got a fancy new motor and my Astra's no what it used to be!

Good to see you getting out regular now GD.

Cheers Doots. Aye, the hills are positively hoaching wif 'em. In fact, there was one of them followed me all the way round this circuit. Even camped out nearby too!

Nice one Graeme - didn't have to wait long

- you teachers with all that time on your hands

Loved the photos especially of Lucy doing a few lengths

joint at the hip like siamese twins are you two. Haha. Enjoyed your double barrel report. Graeme.

That may have been a good chance to increase your bothy tally if you reversed your route, going the same way as the lone walker that you met?.

You can ask Polly..... not sure I'd wish to speculate on that though!

davetherave wrote:That may have been a good chance to increase your bothy tally if you reversed your route, going the same way as the lone walker that you met?.

Really must do something about that soon.