Mount Keen and beyond

Mount Keen and beyond


They had forecast rain spreading across from the west on Saturday so I decided to head east – Mount Keen it had to be. By all accounts the northern approach through Glen Tanar looked the most attractive. I always like to combine a Munro-bagging trip with a night in the tent so I planned to make a round trip by continuing east from Mount Keen and picking up the Firmounth Road for the return leg. But more of that later…..

Of my three main routes to the hills I much prefer the drive to Braemar (the other two are the A9 and the A82, so not much of a contest). Once off the A9 at Perth there is not so much traffic, the scenery although not spectacular is pleasant and green (notwithstanding the acres of polytunnels) and the road itself is not without interest. From Braemar through Ballater and on to Glen Tanar the Dee valley is stunning. Arriving at the road end in Glen Tanar at about 10.30am I made my way up the glen through the pine forest. This is a really beautiful walk with the river gurgling away, the light coming through the trees and the birds twittering. And it would appear to be a good year for foxgloves. And then the peace and quiet was shattered by a huge group of lycra clad mountain bikers – a good 2 dozen of them.

After that I had the forest to myself. Passing the Half Way Hut (half way to ???) I emerged from the trees into the open glen. and Mount Keen eventually appears on the horizon. 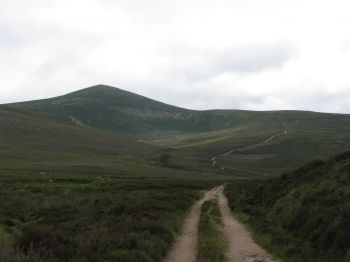 As I walked along I spotted a tick attached to my arm – my first of the year.

I managed to pull it off: I must have picked it up when I stopped for a pee in the bushes earlier. Perhaps there were more. I had a vision of my bum covered in ticks!

Trying not to panic I resolved to have an inspection that evening and to carry on regardless for the time being.

The path up Mount Keen starts from a newish wooden bridge, near to which is a useful footpath signpost. A little way further up the path another sign post indicates that this is indeed the way to Mount Keen. After the pleasant stroll along the glen the path seemed very steep but, taking the left hand fork where the path divided, I soon found myself on flatter ground skirting a large corrie. A final push up steeper and surprisingly rocky ground delivered me to the summit trig point just as the rain hit. “It wasn’t supposed to be like this!” I wailed as the view disappeared and the temperature plummeted.

I almost jumped out of my skin when a disembodied voice replied “No, we only came out because they promised good weather”.

I looked round and saw a couple sheltering behind some rocks. Never assume you are on your own in the hills!

After a brief chat and a bite to eat I took a bearing and descended in the direction of Braid Cairn. I was surprised to find a pretty good path leading down to a boggy bealach and then slanting up across the side of the hill opposite. By this time it had stopped raining and I had a view back towards Mount Keen. On the way up to Braid Cairn there is this rock, with a large B engraved on it, which seems to point the way to the top. From the cairn I descended heathery slopes to another boggy flat bit and then up Naked Hill and Hill of Garney. A line of fence posts starts on the ridge between these two hills and can then be followed all the way along – might be useful in poor viz. There is also another stone with a B on it. (B for boundary?) I had intended to camp next to the lochan at 449883. However, the beautiful blue with which it is shown on the map is somewhat misleading. In truth, it is a very black muddy hole.

So there was nothing else for it but to carry on up to the summit of Cock Cairn. My original plan had been to continue along to Hill of Cat and then drop down and pick up the Firmounth Road. There didn’t seem to be any suitable camping spots for a long way though so I decided to descend from Cock Cairn and try to find a campsite by the burn before it reached the forest. At about 6pm I was putting up the tent on a not very flat piece of ground above the burn – the best spot that I could find. In the privacy of the tent I decided that I had better investigate the tick situation. How I wished I had found time to go to those yoga classes!

But I didn’t find any and not long afterwards I was tucking in to minestrone soup, chicken tikka masala and fruit cake.

I only had about a two hour walk back to the car the next day but it was another pleasant stroll through pine woods, which I thought were even lovelier than the ones I had walked through on the way out. After crossing a ford at 483921 I decided to stick to the riverside path as it was so pleasant. It eventually reaches a bridge that leads to the back gate of Glen Tanar House but another path takes you past a pretty lake with a boat house before you join the main track again. Mount Keen may not be a very exciting hill but it made an enjoyable outing with the tent. You won’t be hearing from me for a while as I am heading to the States for a while. Hope everybody has a great summer in the hills. Cheers for now.

Enjoyed that - love the pinewoods in that area. You are actually quite lucky with the ticks - I think Helen gathered about 8 yesterday on the Glenelg peninsula.

I am heading to the States for a while

I always get loads of ticks - but then I will insist on sprawling around in the grass in shorts I suppose! I've found a great way to get them off is douse them in whisky (a cheap and nasty one will do) and then they stand up away from your skin apart from their mouth (must burn them or something). You can then see which way to pull them out without leaving their head in you.

I didn't find Mount Keen boring - I found it a very pleasant walk - we did it from Aboyne or Ballater, dropped down into Glen Tanar to join your route (looks nice camping at the head of that glen by some old ruins) and then went over to Glen Mark and the Queens Well where my parents kindly picked us up!

LOL to the bit where you spoke aloud thinking you were alone and weren't! I'm always doing that as I quite often chunter away to myself if I'm on my own - have to really if there's noone else to chat to;-)

The B on the boundary post will be for a place nearby facing that side of the stone (usually) - so perhaps Ballater?

Oh - and don't complain about the polytunnels... they're responsible for the best raspberries in the world!

Paul Webster wrote:Enjoyed that - love the pinewoods in that area. You are actually quite lucky with the ticks - I think Helen gathered about 8 yesterday on the Glenelg peninsula.

I am heading to the States for a while

Only going for a couple of months - will be back in September for more Munros.

Thanks for your tips re ticks, Mountain Coward, but my rucksack was heavy enough without having to take whisky as well! It would have been good to do a one way trip over Mount Keen but I had nobody to pick me up from the other end. The circular route was a compromise to avoid having to walk in and out the same way.

bootsandpaddles wrote:Thanks for your tips re ticks, Mountain Coward, but my rucksack was heavy enough without having to take whisky as well!

Hi again - I didn't mean a full bottle - I just take a miniature of one of the cheaper ones with me. Also, providing you get them off within 24 hours (I think it's that time frame) in order to avoid Lyme's Disease, you can just keep the whisky back at base and apply it in the evening to do your tick removal.

Great clear pictures!
The stone with the bee on it that you said was conveniently pointing in the direction of Braid Cairn, like the one near the summit of Mount Keen is a boundary stone. Boundary between Kincardineshire and Forfarshire?
I was up towards Braid Cairn this morning following the path up beside Glascorrie Burn, where the burn crosses the main Mount Keen path from Invermark. From due to the cloudsnot far beyond the top of Glas Corrie walking on fresh snow the there was poor visibity, so decided to retrace my steps back to the car.