I had planned to walk Sgor na h-Ulaidh & Beinn Fhionnlaidh in Glen Etive, this would just leave Beinn Sgulaird to complete the Munros in this area.

No one had posted anything on WH so it was off to the multiple munro baggers site that is Steve Fallon. Sure enough he linked all 3, on what would be mostly pathless terrain for much of the walk. I decided to vary his route slightly....

Early rise and left the beautifully enchanting landscape that is the East of Glasgow, would Glen Etive match it for superlative scenery and wonderment.... 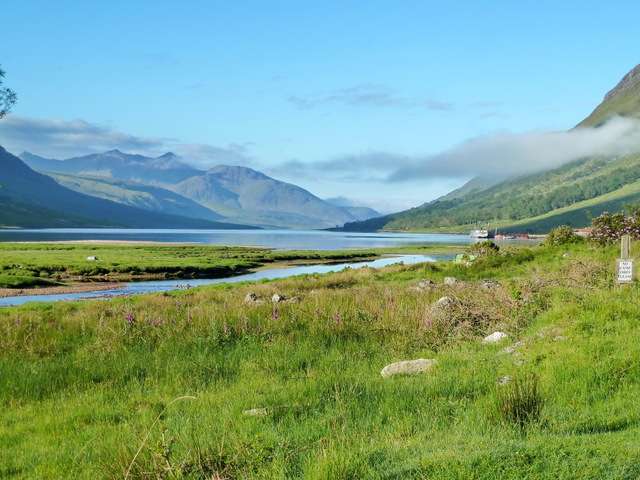 Got to the start and headed North 2k through Glen Etive forrest at 7.15am 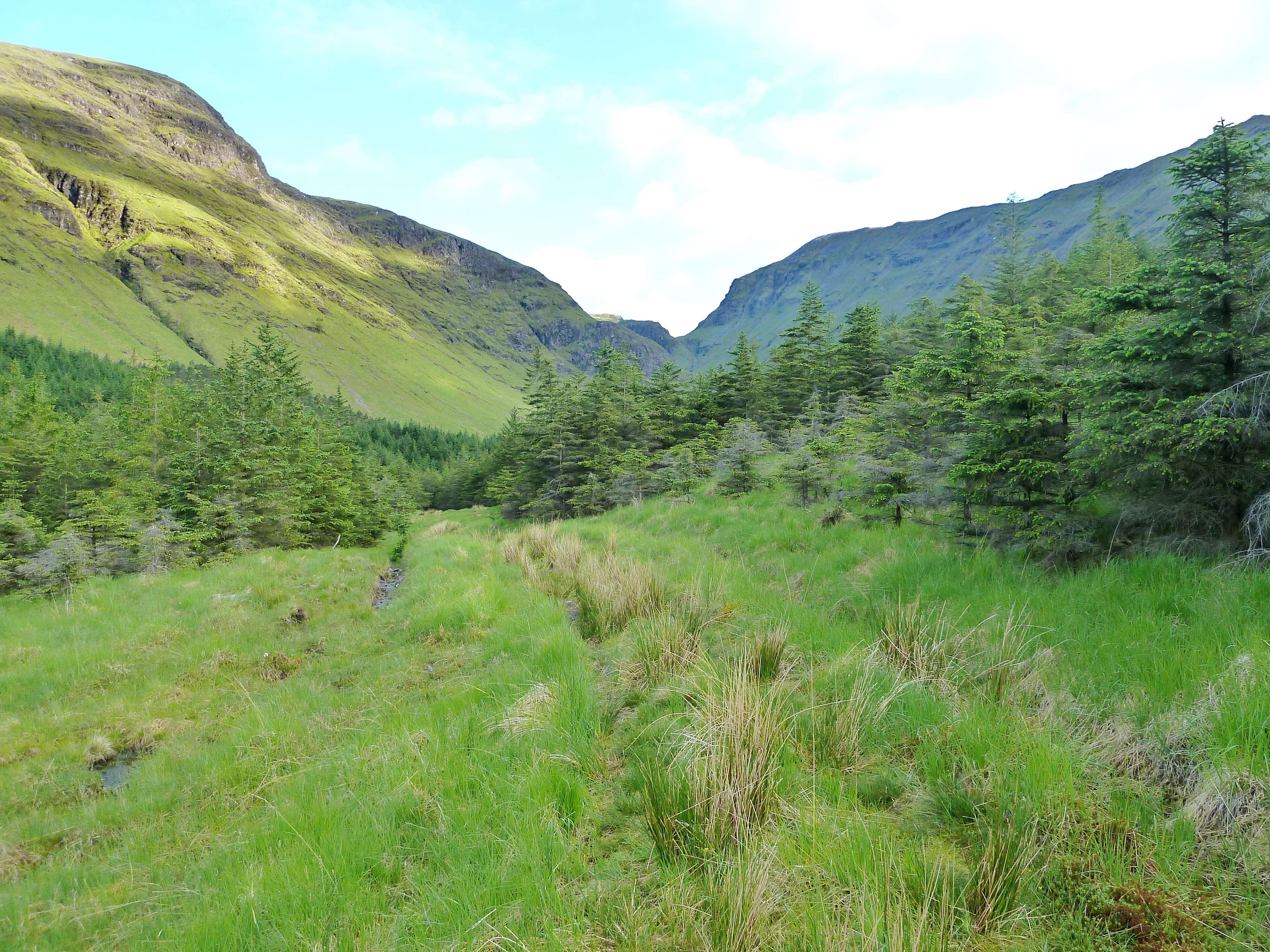 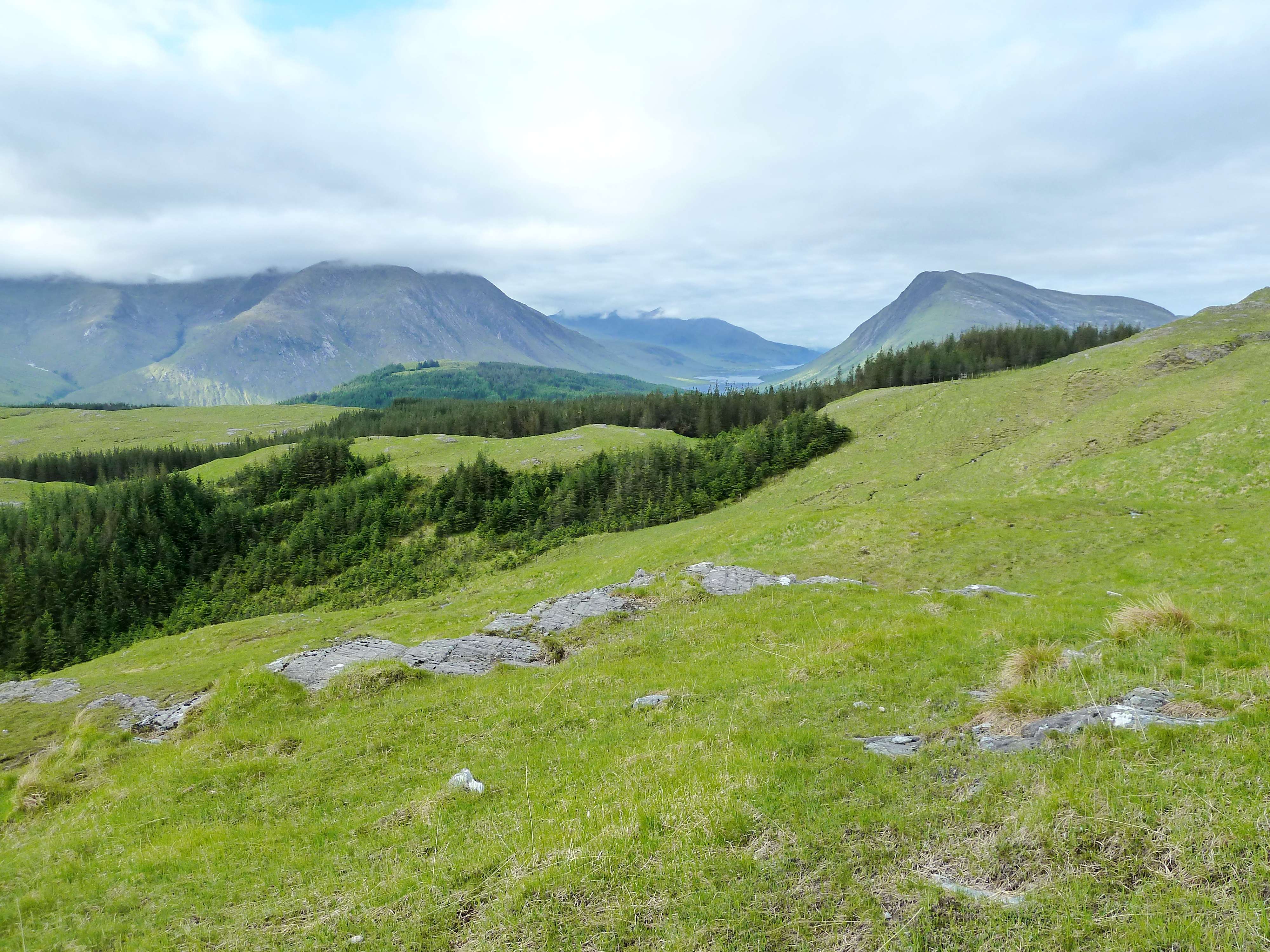 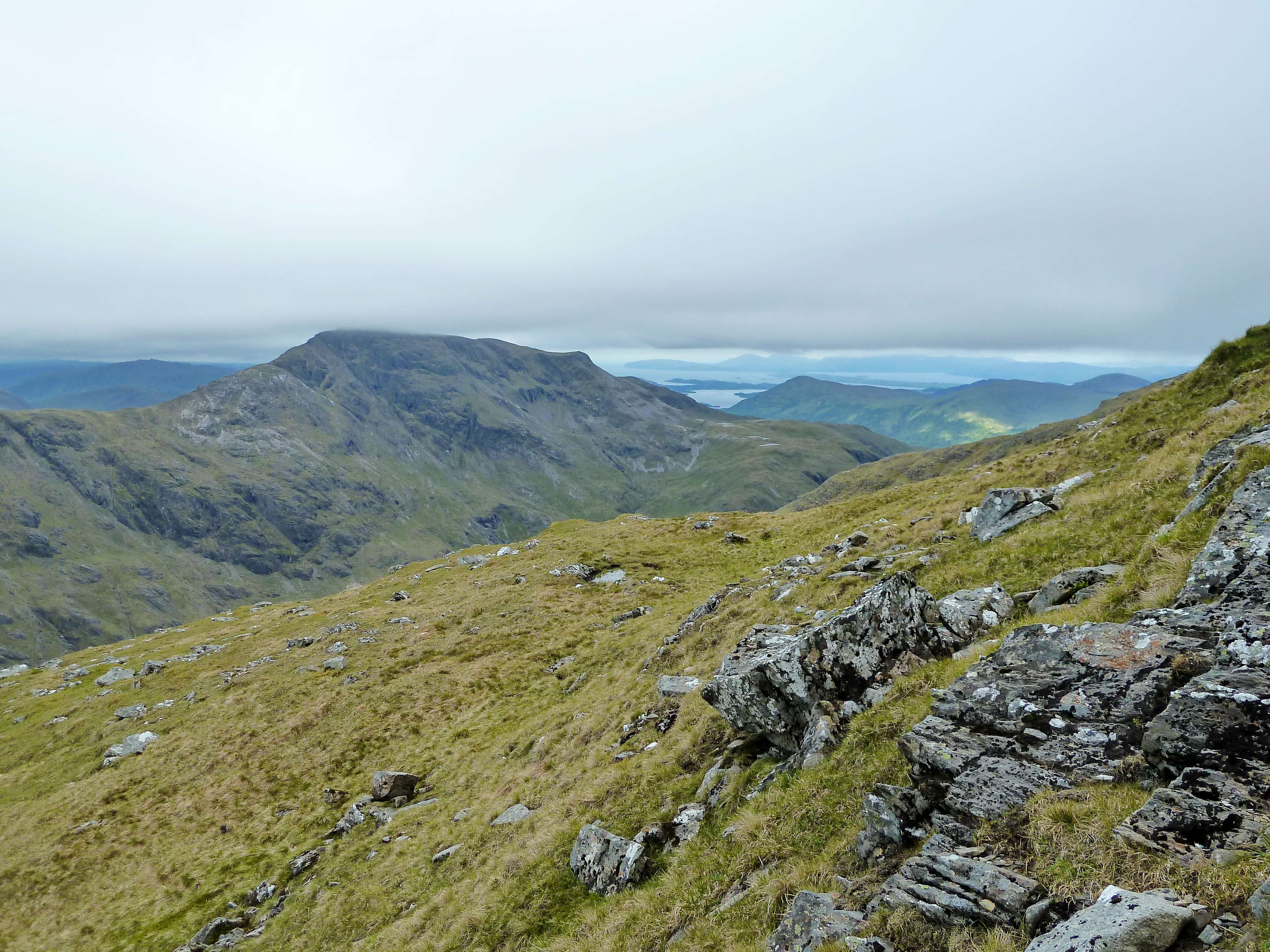 The terrain was pathless and extremely boggy but i soon got to Bealach Clach nam Mierleach. I ditched my rucksack here and headed NE a 200M before ascending the rocky last 600M NE to the summit of Sgor na h-Ulaidh

For some reason i wasn't enjoying todays outing and when i reached the summit the clag appeared and i could see nothing, at this point i thought of heading back to my car. . . .not felt like this on the hills before, was i losing interest?

No summit shot of the cairn to impress the good folks of WH with.

I gathered my thoughts and headed back to the bealach, the tricky rocky West face of Beinn Fhionnlaidh staring at me 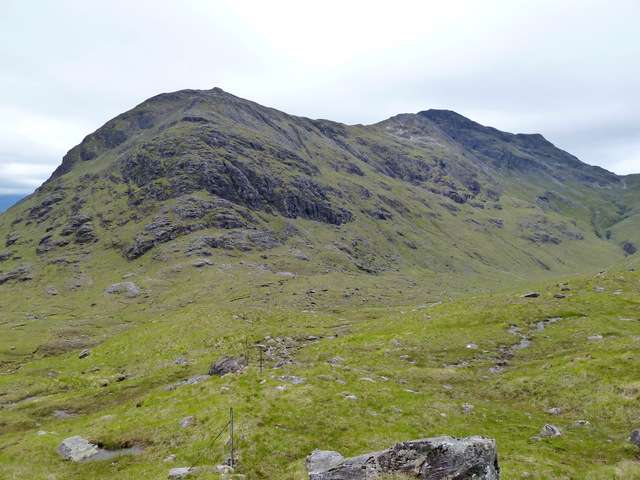 By now the clag had dissappeared and seeing what lay ahead renewed my motivation.
At the foot of the rocks i went South 400M then W 100M before heading upwards N to the ridge leading to the summit of Beinn Fhionnlaidh. I had not taken a direct route up the West face as it looked very dodgy. 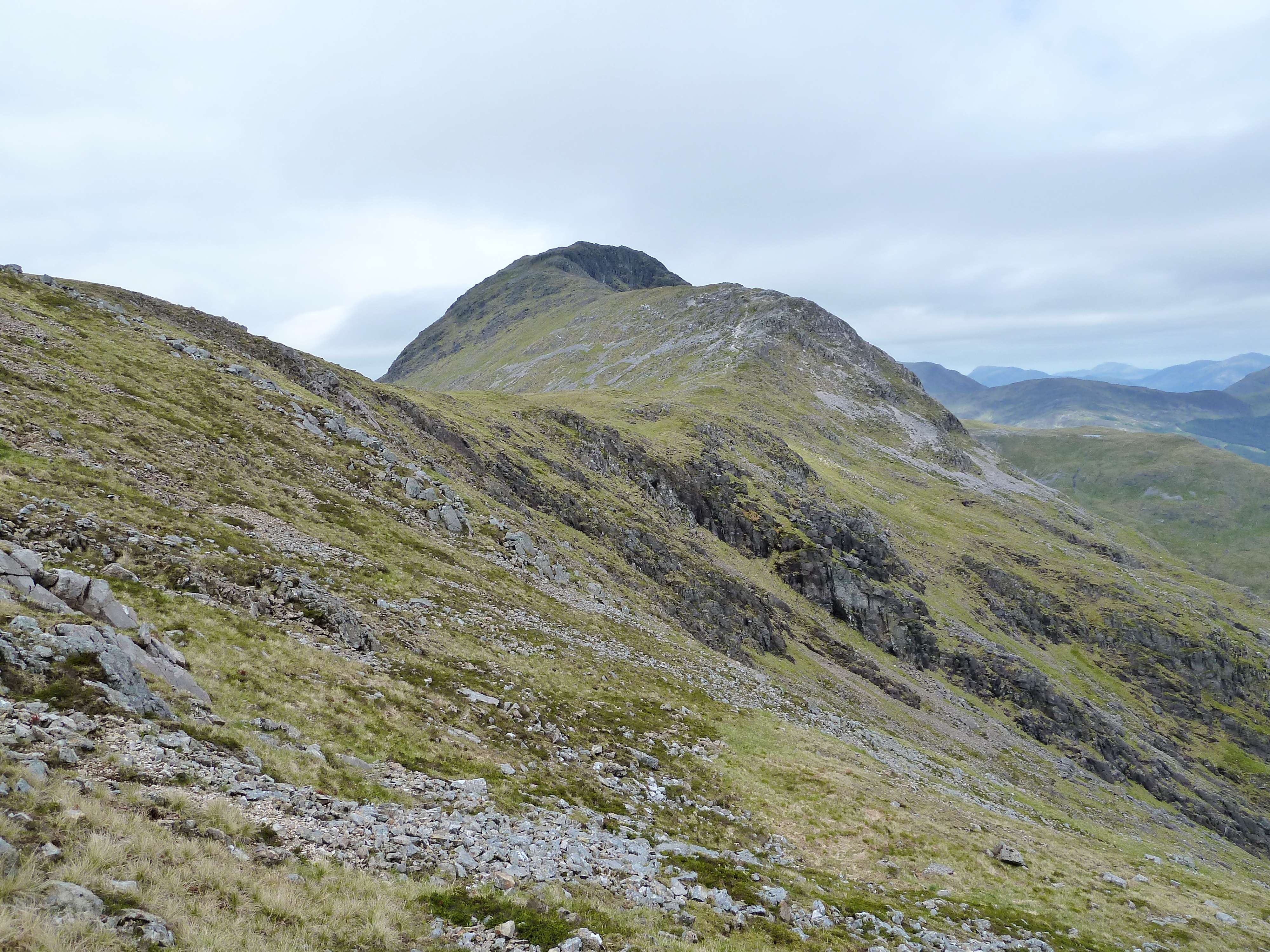 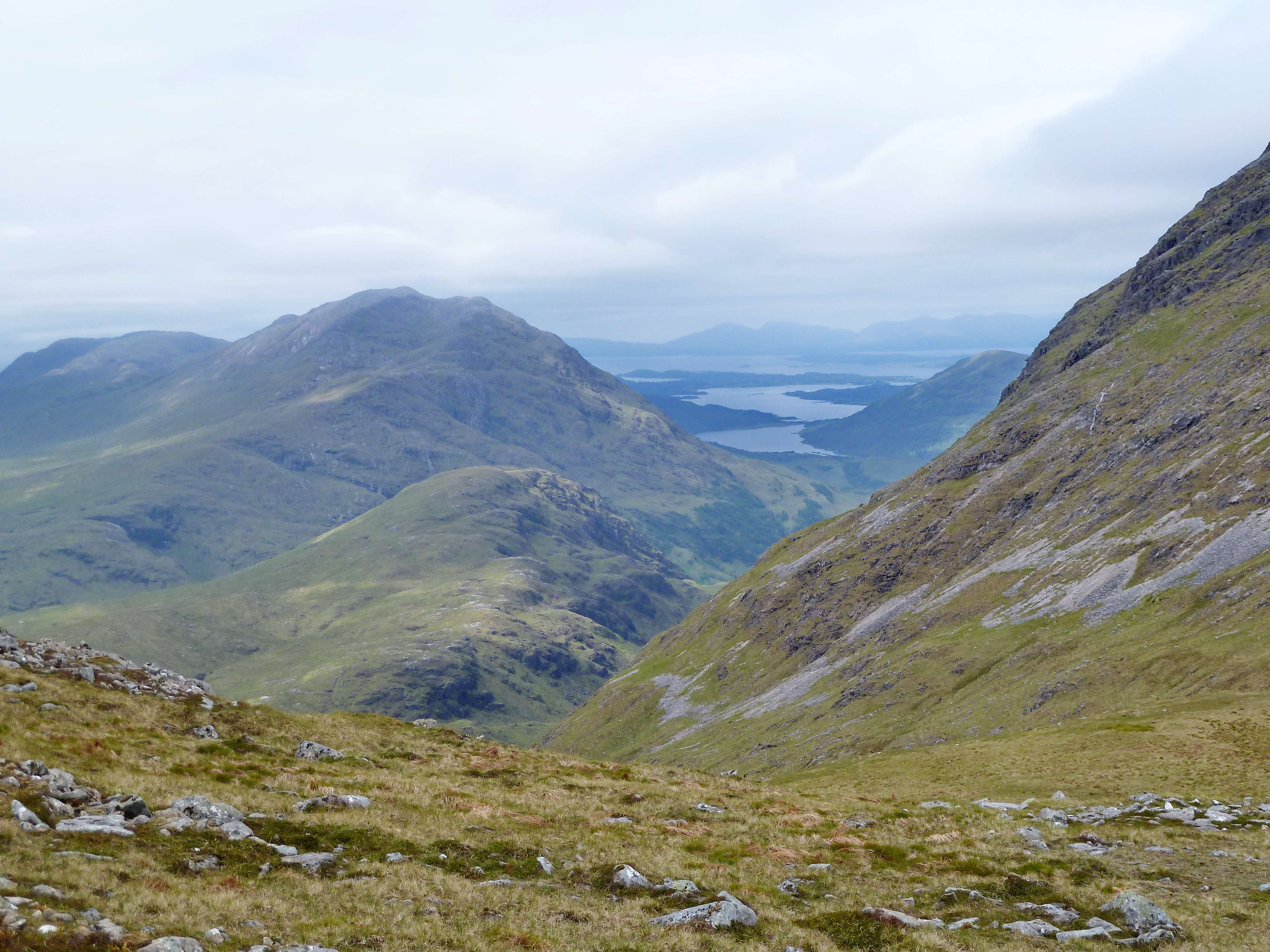 I soon reached the summit of Beinn Fhionnlaidh 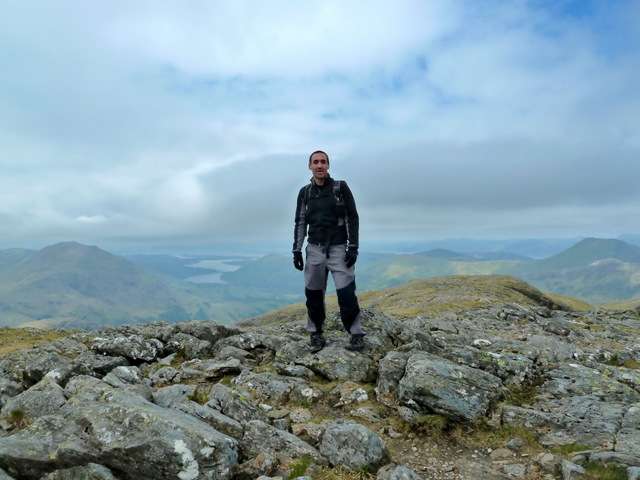 Quick bite to eat here as i knew the difficult part of the walk lay ahead. By now i was in good spirits and really enjoying the solitude, being lost in my own thoughts. . . .and thinking, that this marginally beats the East End for beauty

With renewed purpose and vigour i retraced my steps down the ridge 500M and turned right, heading South for 1k following some fence posts.
I could see Sgulaird in the distance 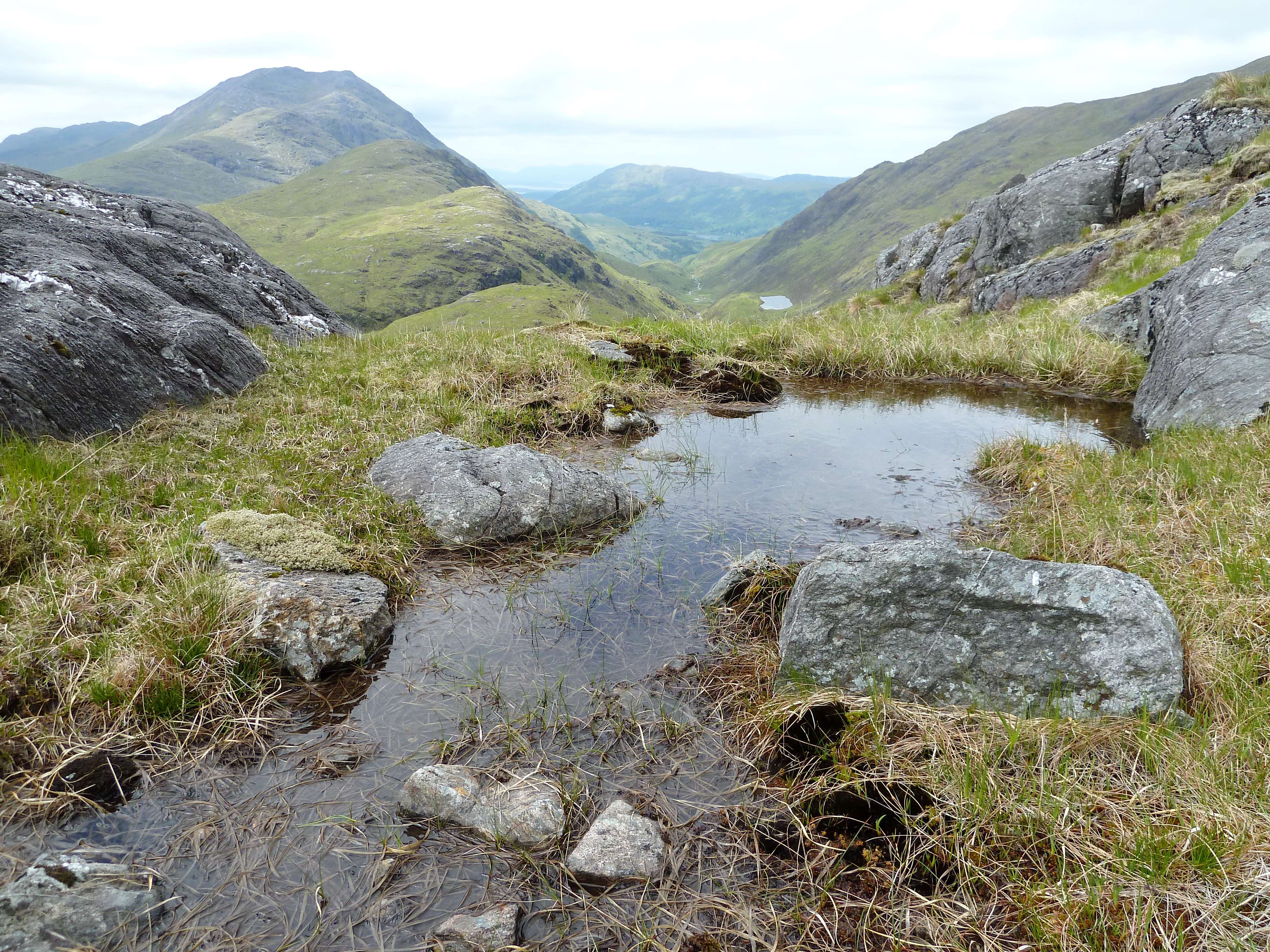 Being able to see clearly i just made sure i stayed west of Lochan na Fola & Airigh nan Lochan. The terrain was wet, boggy and pathless...but i was having fun. The trail running shoes wet and dirty.

When at Lochan na Fola i started to ascend west to Stob Gaibre. It was now that i started to really feel it, the ascent never seemed to stop....but again i was enjoying the phsyical challenge, i had entered a new zone

I had ran out of water so was drinking from streams, yummy . . . .saying that at this point i would have drank my own ****, in the name of preserving life 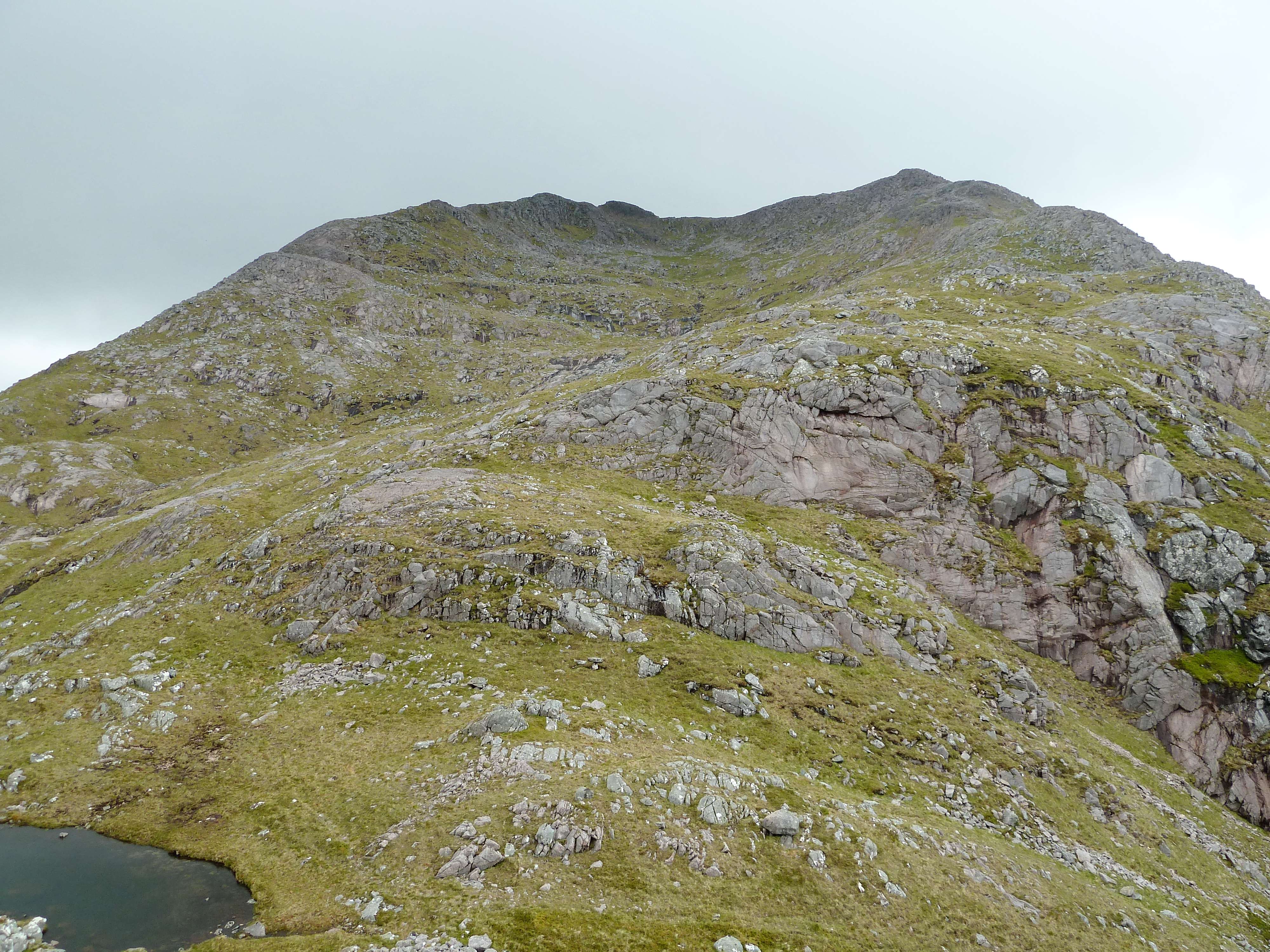 Again this felt like hard work, but again strangely enjoyable. . . .i had long forgotten about my mini breakdown at the start of the walk, what was that about

I reached the summit of Sgulaird and the clag appeared, managed one photo 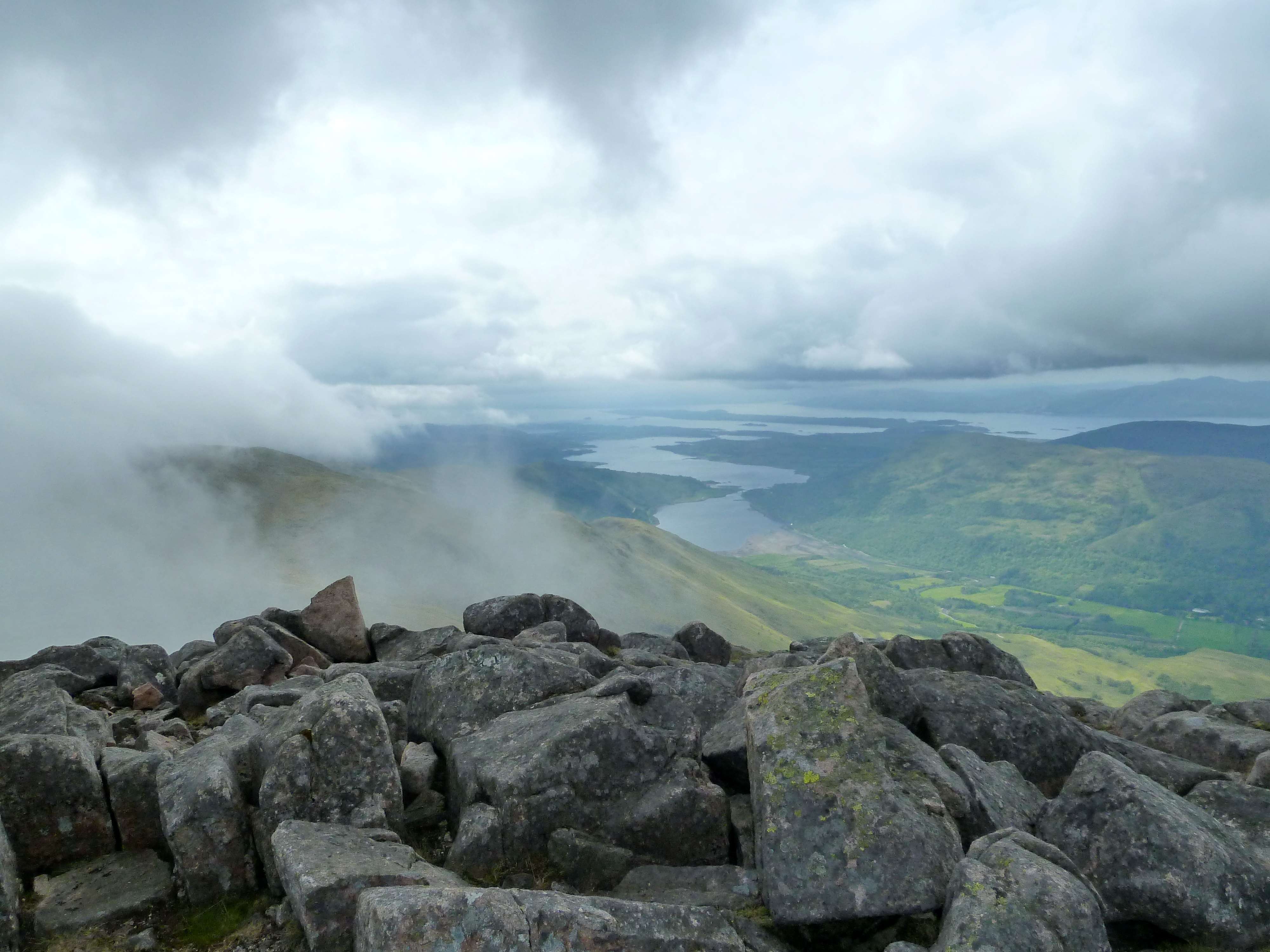 Ate some pasta and was on my way for the epic walk out. I decided to descend straight down the centre of Coire nan Tulach, this presented no difficulties. It was a staight forward walk 5k East to the West side of Glen Etive forrest, again terrain super boggy and wet. 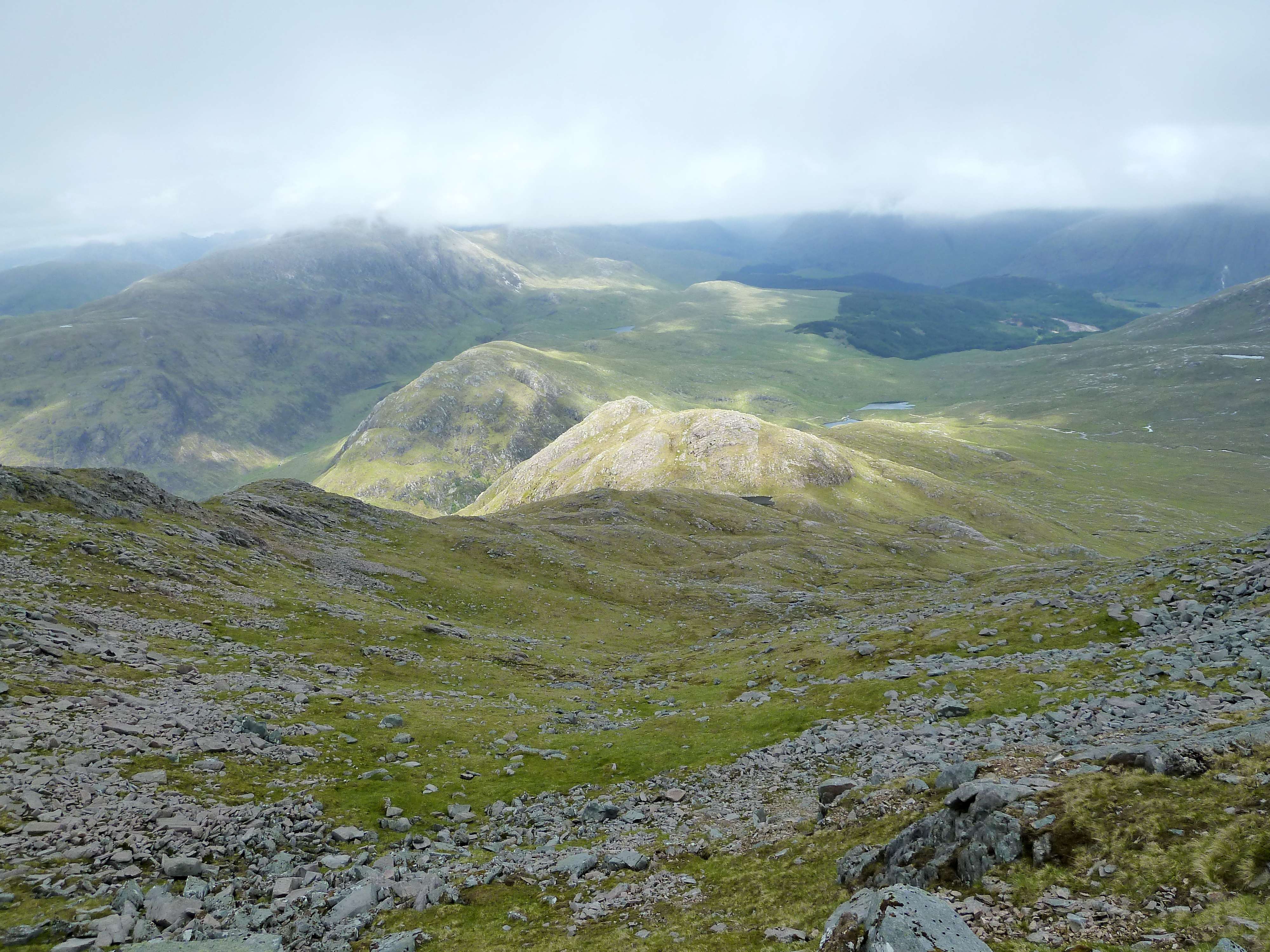 At the forrest there is a muddy path over 2k which takes you to the end of the walk and hopefully to my bike. 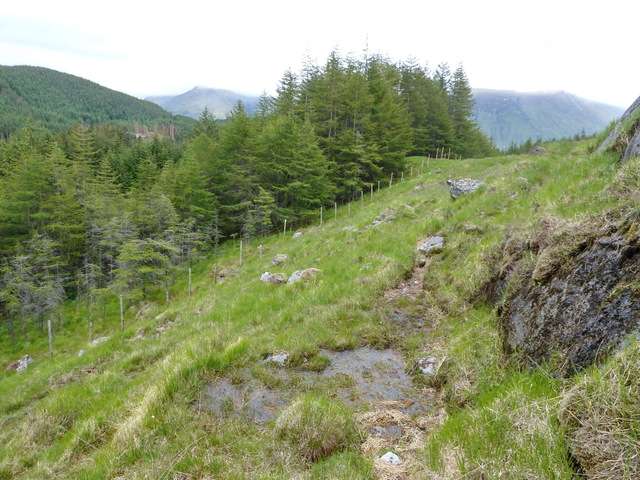 The last 2k were torture, i was covered in mud to my knees and was very wet. 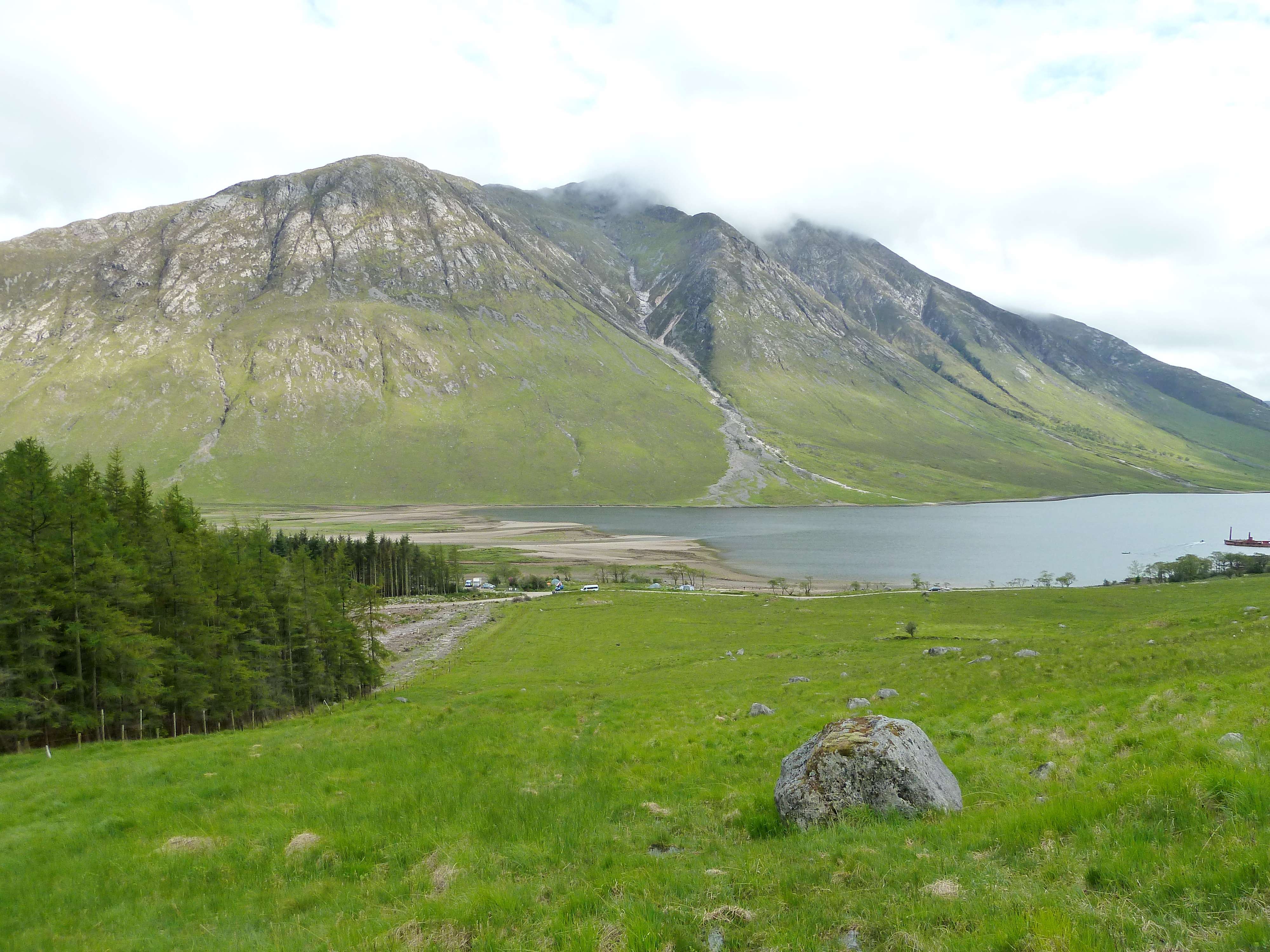 Thankfully my bike was still there and i cycled the 5k back to the car, this was very enjoyable with the views over to starav and friends spectacular.

Got in the car and left at 5.15pm, the drive back through Glen Etive stunning.

This was a very hard walk but i enjoyed it thoroughly and the solitude had given me time to sort some stuff out in my head, i was now looking forward to Glasgow and the beauty that lay waiting in the East End

p.s well done to Rockhopper who completed a similar route then next day did the Starav 5, superb effort.

Like I said on rockhoppers TR thats a big route,nice one,my gammy knee would never hold out doing this round.

I did think about Beinn Trilleachan but i had better things waiting for me in the East End of Glasgow, i had to preserve some energy

gammy leg walker wrote:Like I said on rockhoppers TR thats a big route,nice one,my gammy knee would never hold out doing this round.

Sure it would gammy, just do it over 3 days. .wild camping 2 of them

Another impressive big walk there, reminds me when I used to be that mad!

As they say in the East End " aff yer heid "

Great effort and glad you got the views in the end as it could have been a long walk spoiled ! I'd be looking to wild camp on this one. Well done

mountainstar wrote:Another impressive big walk there, reminds me when I used to be that mad!

Jockstar wrote:Great effort and glad you got the views in the end as it could have been a long walk spoiled ! I'd be looking to wild camp on this one. Well done

look forward to your TR

Went up Beinn Sgulaird yesterday with the Glasgow group. First hill walk for ages. Seriously need to get fitter. Have time off soon looking forward to the snow and some energy sapping adventures like this one dooter. Bit disappointed to not see a photo of you silhouetted at the very tip of a precipice as was your signature pose when I walked with you.

aye, how our world has changed