sunday morning, we left edinburgh and arrived to glencoe car park just before 10am.
the day was great - warm, sunny and no wind at all

perfect day for a long walk just like this one

we followed the path up, the track itself is a good one with good rocky steps, not too high even for my short legs 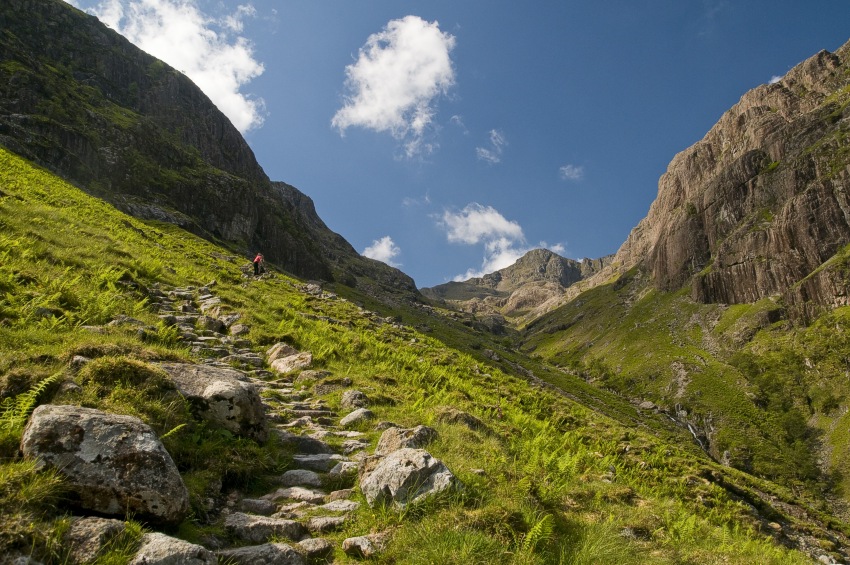 views around were amazing, aonach eagach and aonach dubh just above us 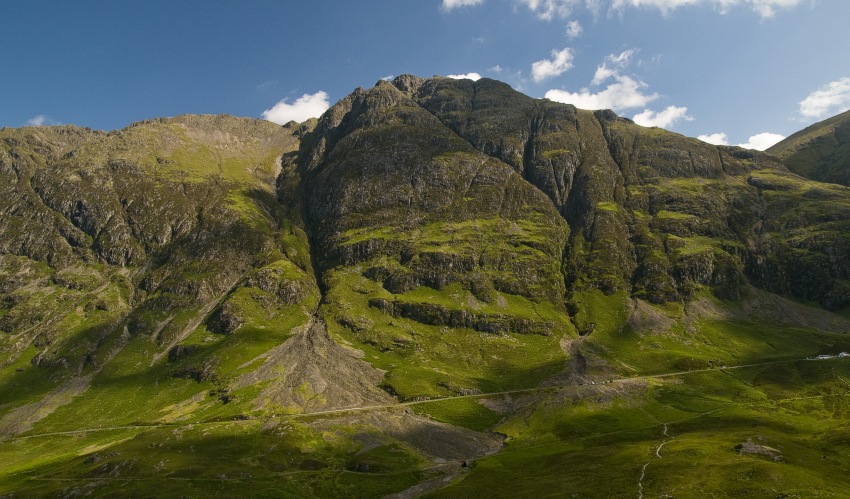 we continued up untill the first break at the waterfalls and the cooold pool, then walked up again 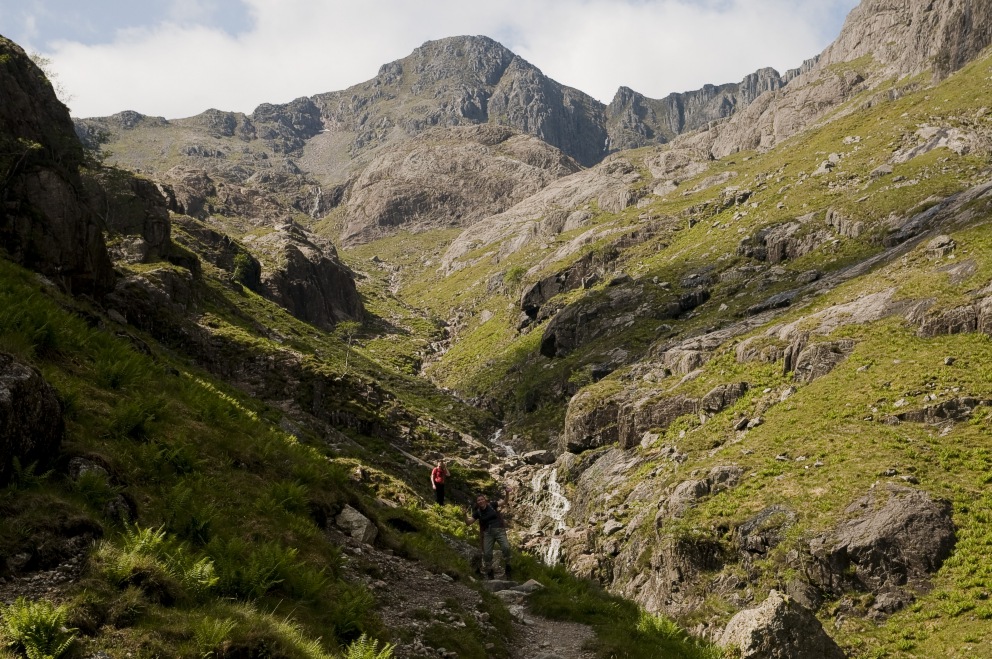 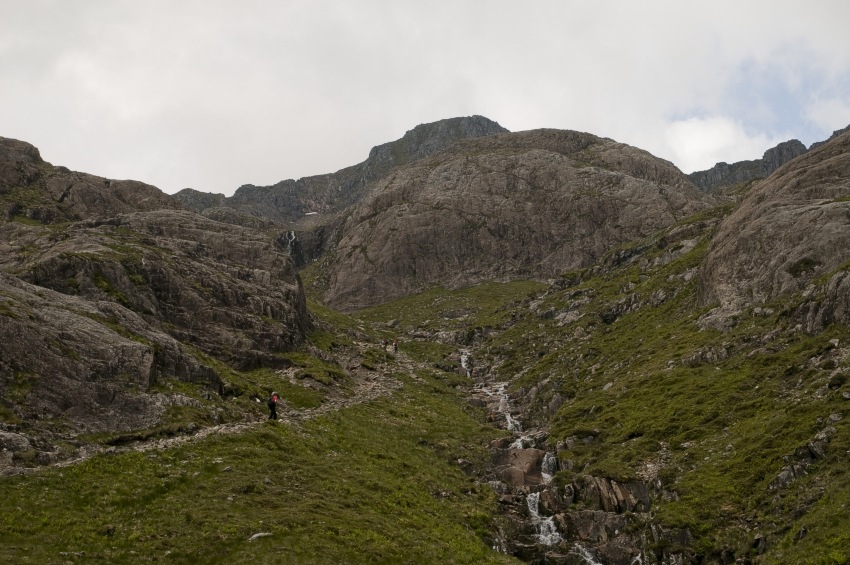 we planned to follow the WH route. as i could see on the map we were supposed to take a faint path just at the end of our main track. that was a bit confusing, as the main track never ended until we realised that we already missed our turn right. therefore we decided to continue up the steep path, scrambled a little and reached the 3 lochans 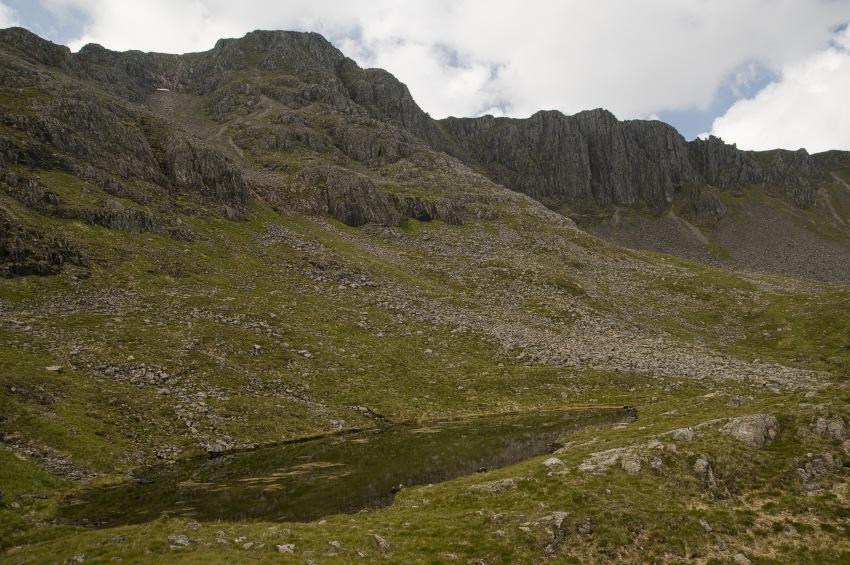 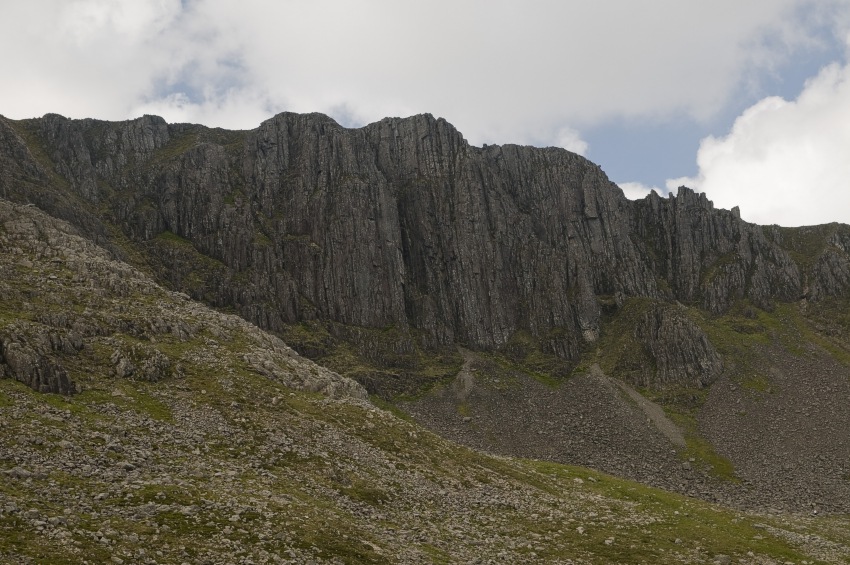 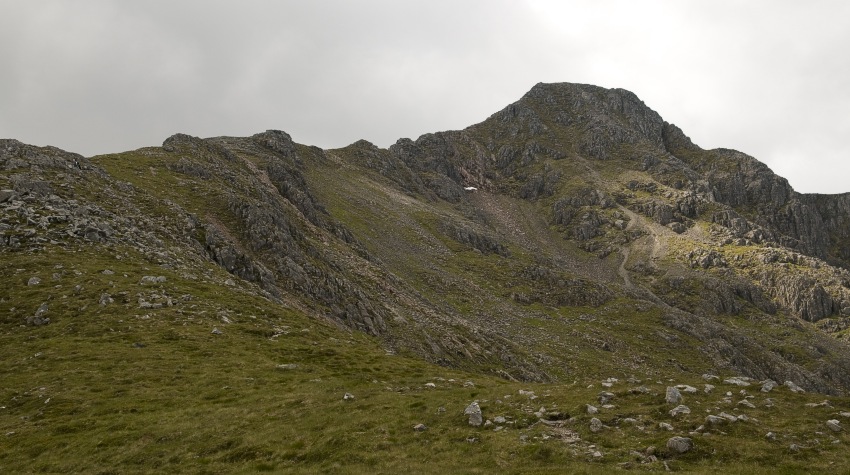 from the ridge we actually had the first glimpse to our way back down via the red scree gully. at this point it seemed to be a vertical wall 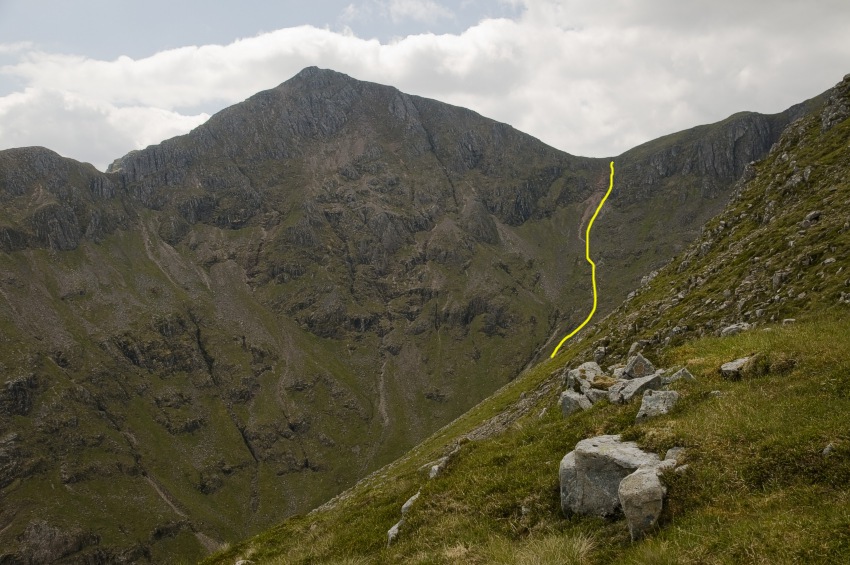 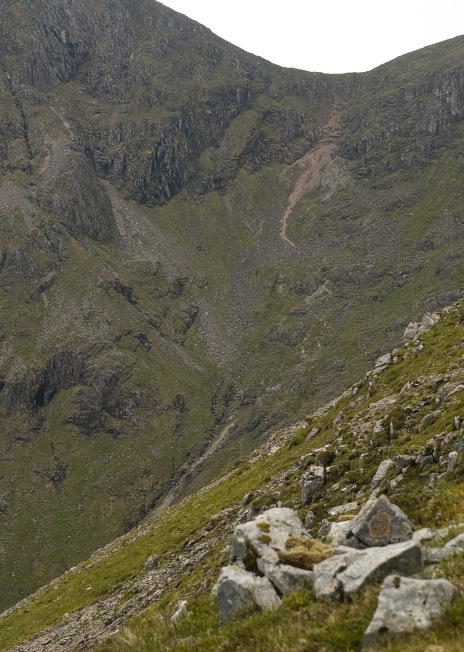 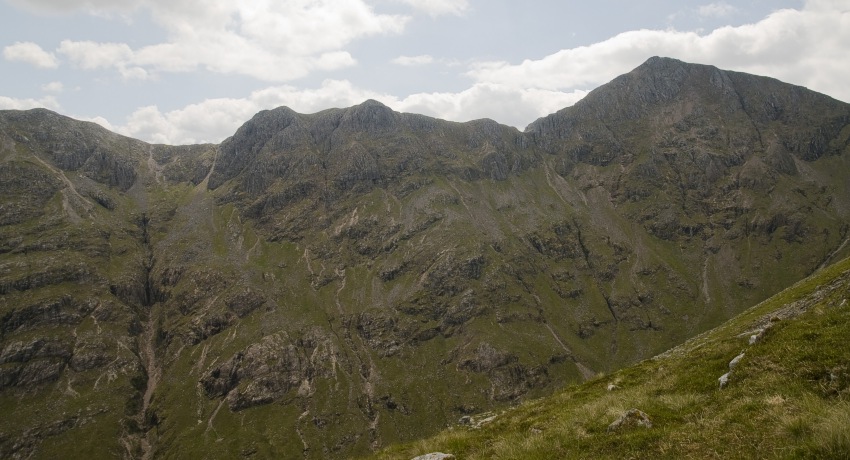 the scramble to the summit was a short one, and soon we found ourselves on the top of our first mountain of the day. we made it in 3.5hrs from the pass of glencoe car park 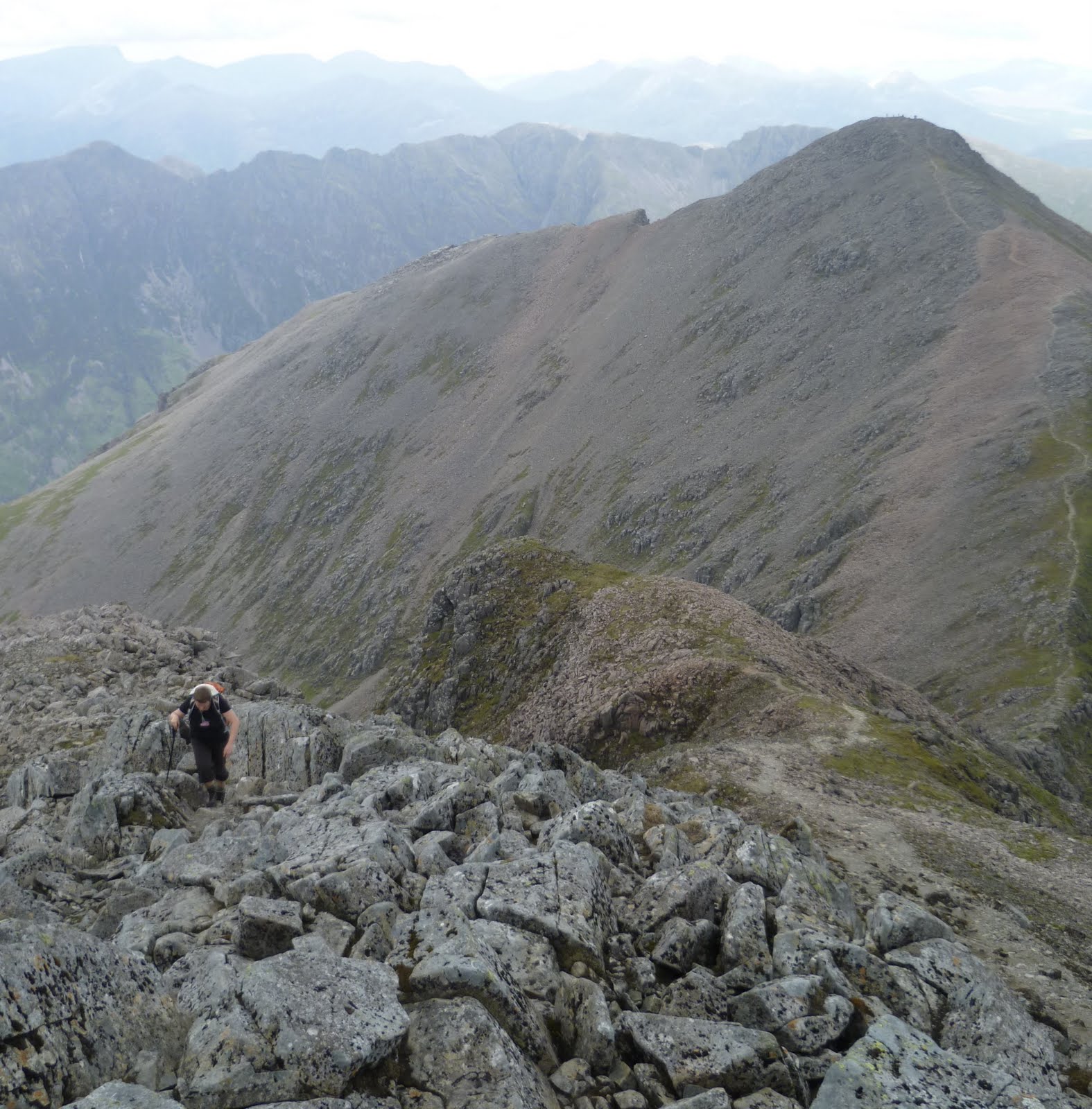 views from the ridge : the lochans and aonach eagach 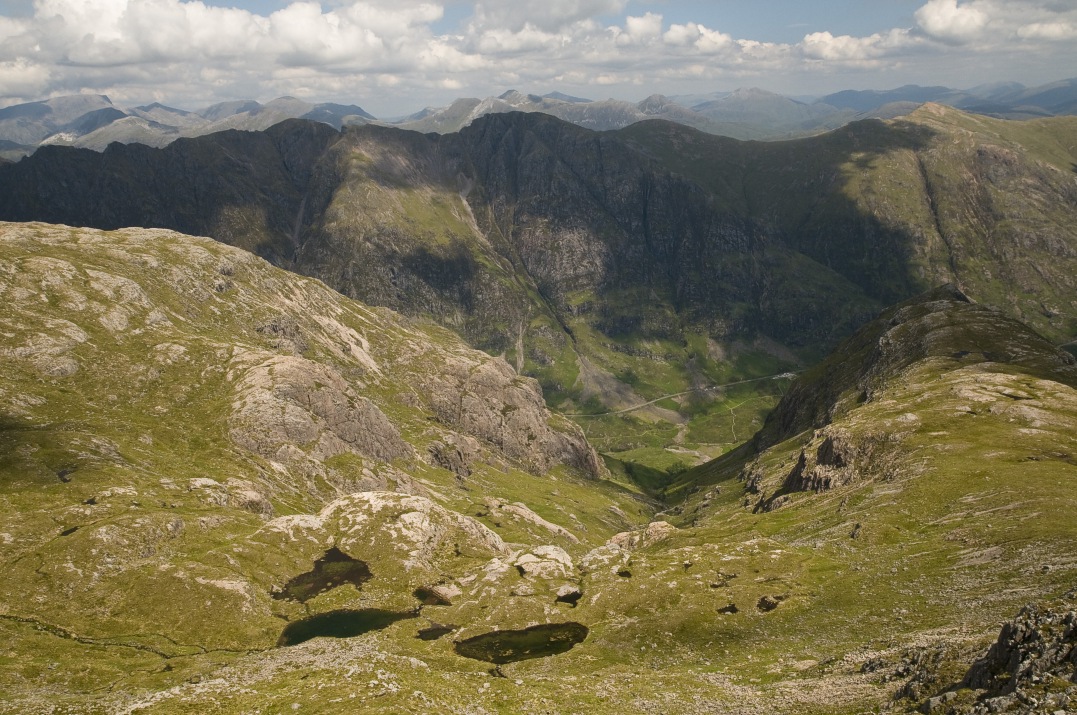 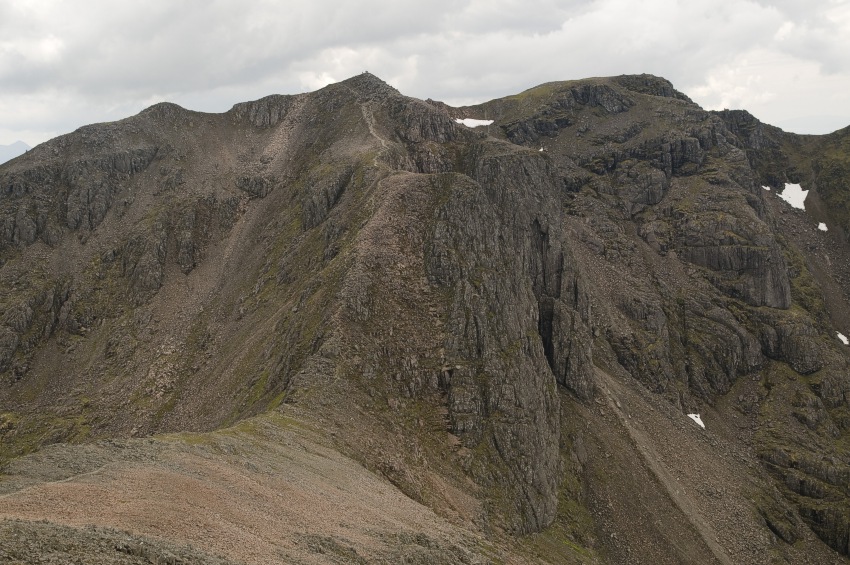 after a short break (midges made us go just after few sips of water) we took off and continued to bidean nam bian (4.5 hrs from the pass of glencoe car park) 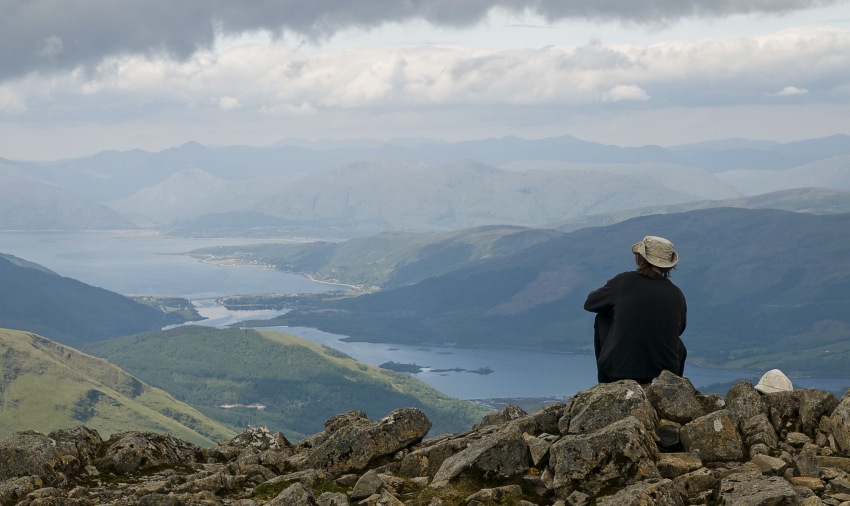 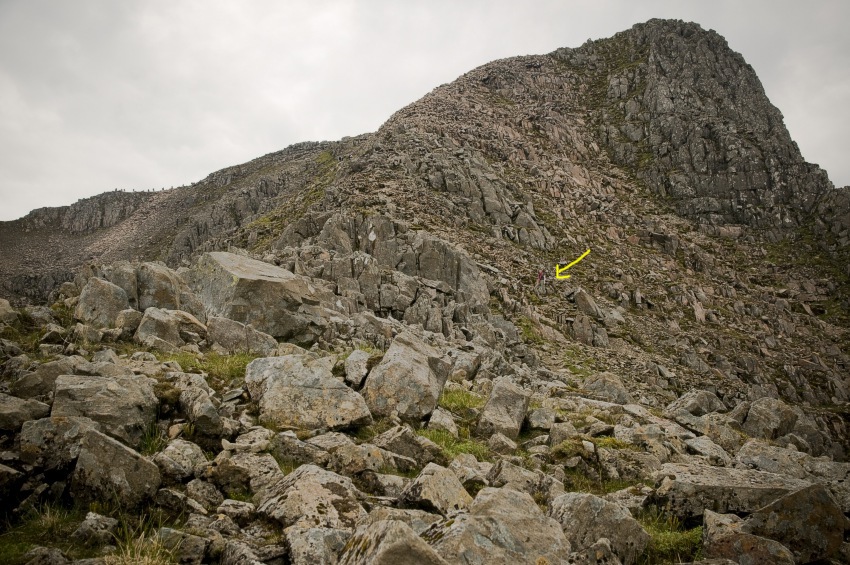 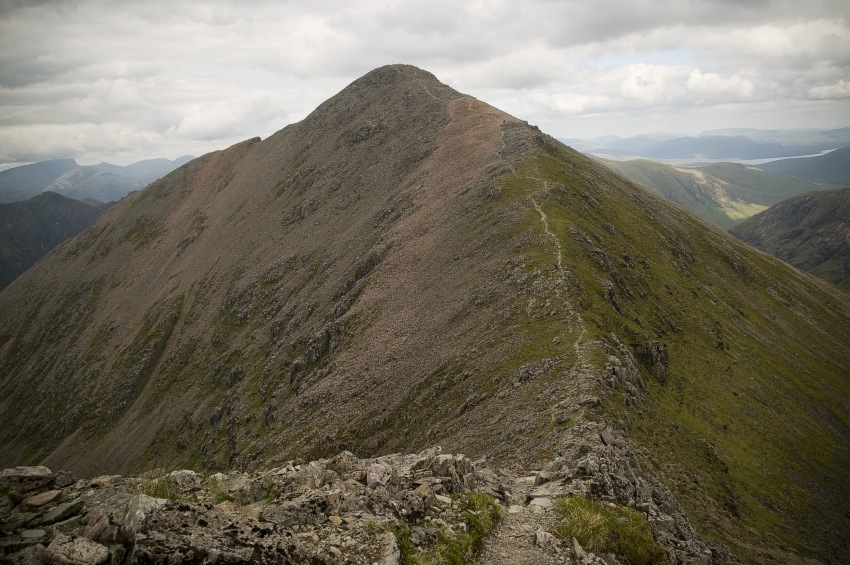 unfortunately, the weather began to change just as we reached bidean nam bian, so we just had a quick sandwich and took few pictures before we rushed towards stob coire sgreamhach 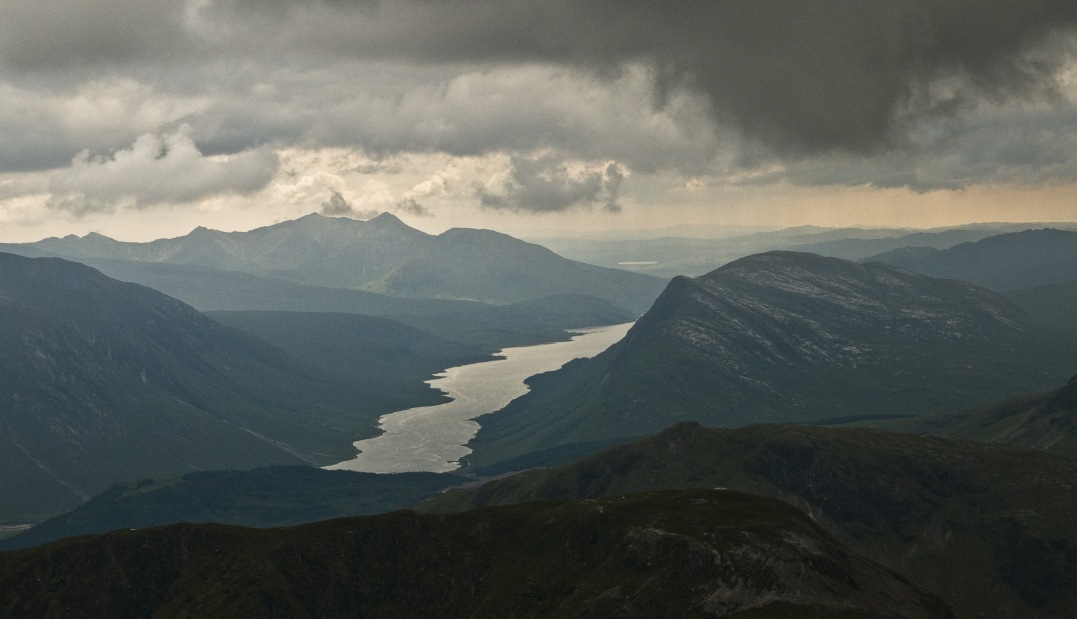 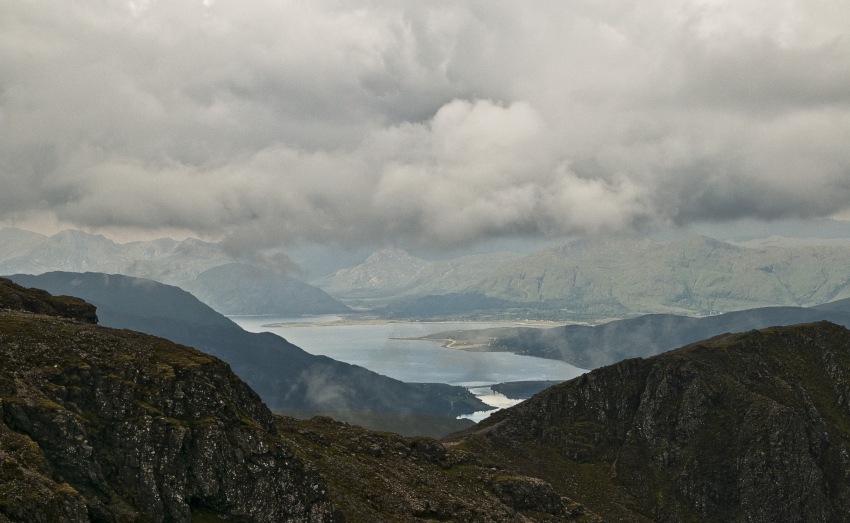 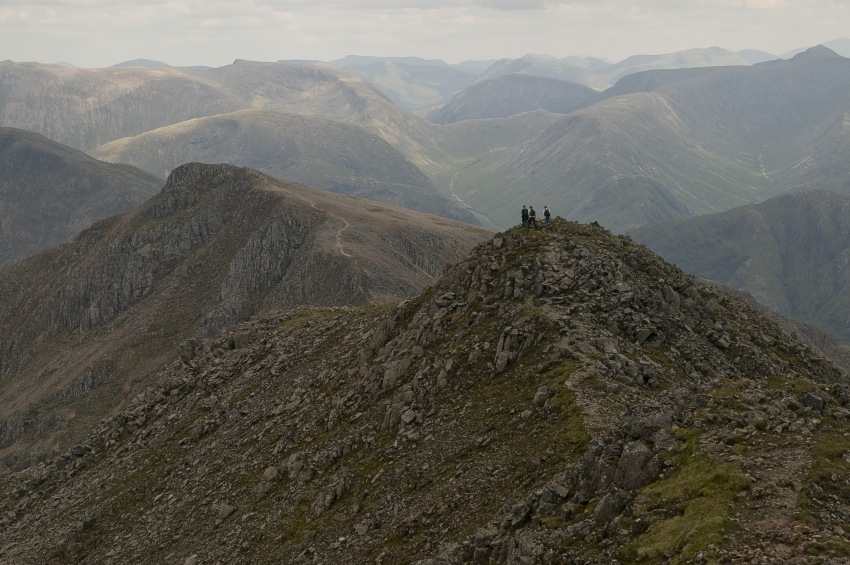 bidean nam bian from the summit of stob coire sgreamhach 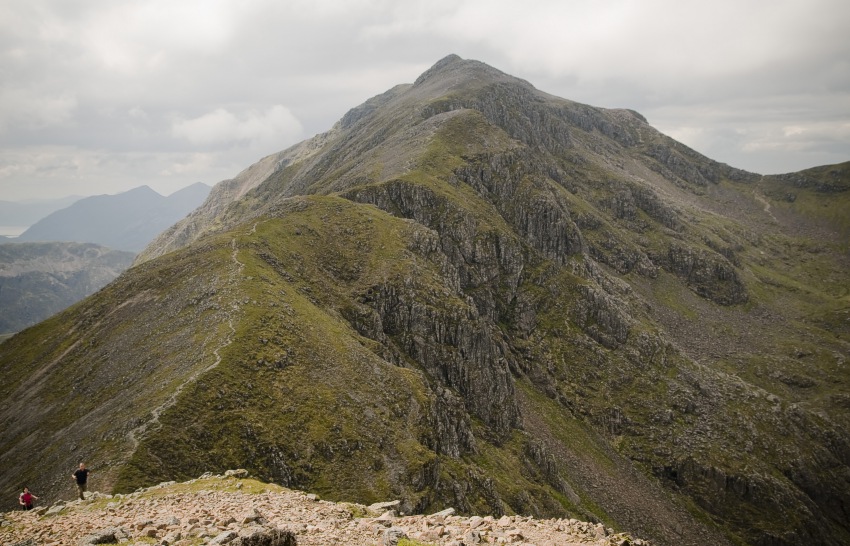 reaching the summit of our second munro of the day was just a 15 mins climb (from the red scree gully). we found it very easy and quick, definitely recommend to climb that one - it's a quick munro, no efford whatsoever. 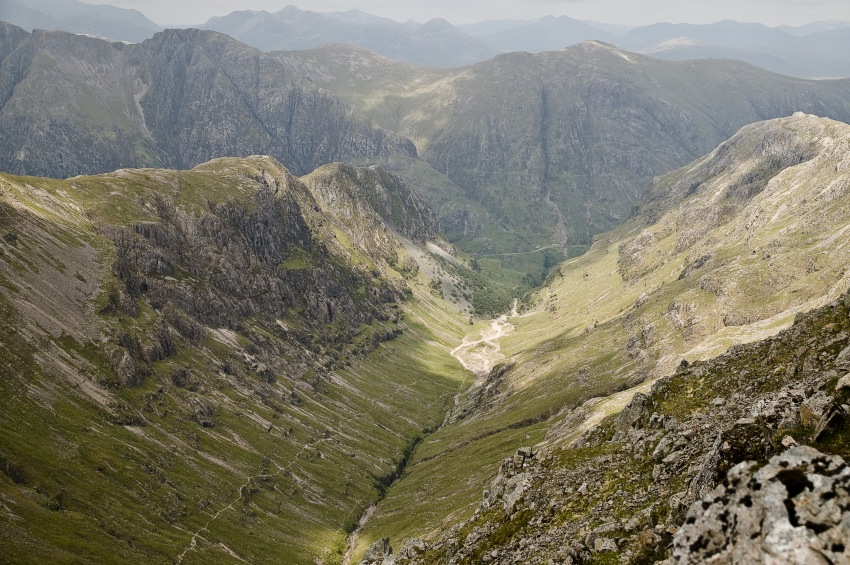 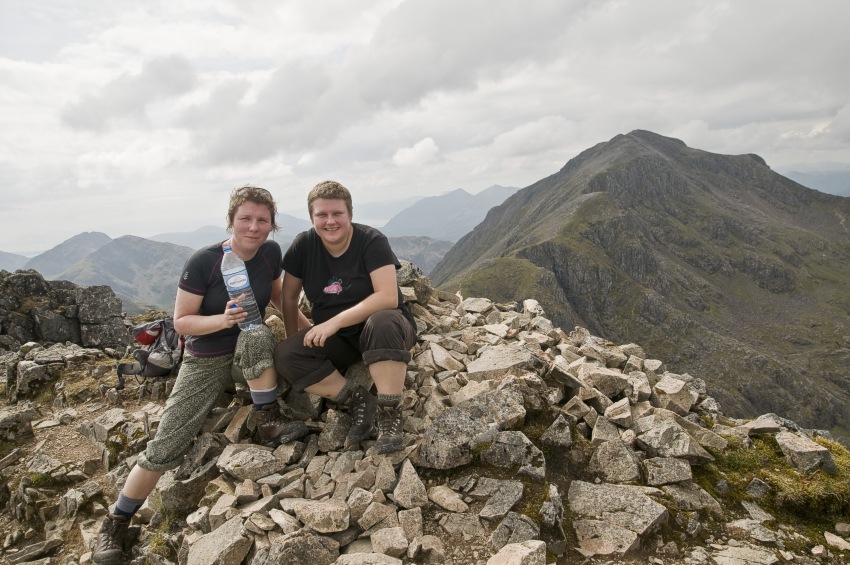 after a short way down from the munro we found ourselves at the red scree gully, wondering what's the best way to tackle it. i descended just thru it - it was a bit unstable but manageable. my mates descended via the rocks just on the right hand side from the gully -and it was the best way down, definitelly. safer and easier. 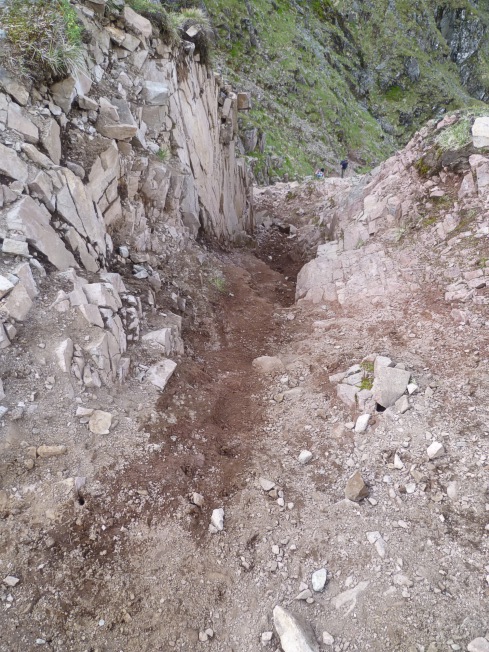 i have to say, that the way down was long, painful with extreme care required. the scree was loose, it was just 'escaping' from under our feet. the descent to the lost valley took us about 2 hrs (at least it felt like 2 hrs) and by the time we finaly reached the flat floor of the valley i was totaly knackered. 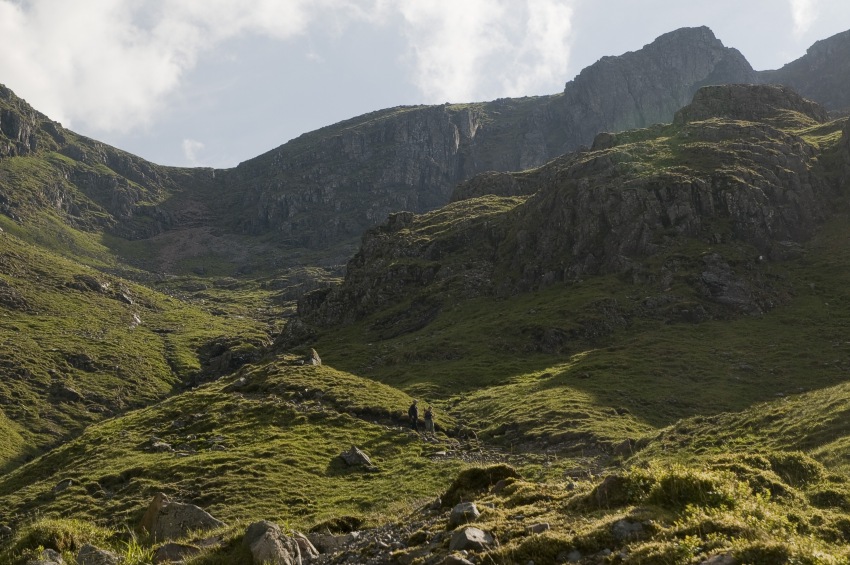 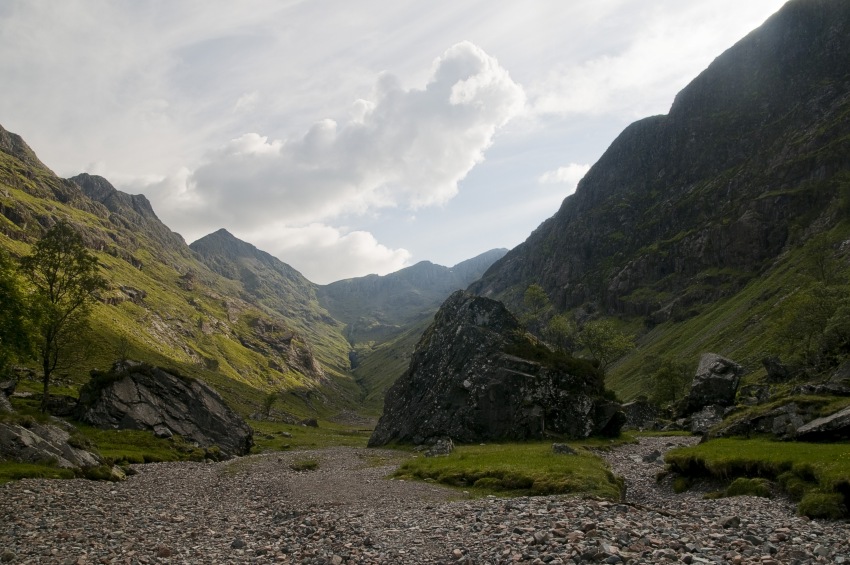 i also have to mention that looking from above i expected the valley to be a nice sand.. apparently there are smaller and larger rocks, real hell for my feet (that were wrecked already by the loose scree). it was a hell of a walk down, but maybe it's just my own, personal experience. another thing i have to mention is a way out from the lost valley. from the map it looks like the path goes straight down via something that actually is a river (dry last weekend, but definitely 'alive and kicking' in spat). we walked a little bit this way but it was pretty defficult to jump thru / over/ from some of the large rocks, therefore we decided to come back to the valley and take a path (marked with cairn) that was a little bit to the right hand side and gently climbed up. that was the exit, although still there were some rocks to jump from /thru.
we crossed the stream via the stepping stones, but again it wasnt clear should we go straight down along the stream or climb a bit up to join the path we saw some time earlier. in our case, we retreated few metres back and climbed a rock shelf to rejoin the 'higher' path, but apparently both paths meet up at the very end of the walk down (at the gate).

to sum up, the day was great, although i struggled a lot, especially the way down.

finaly safe and happy the the car park 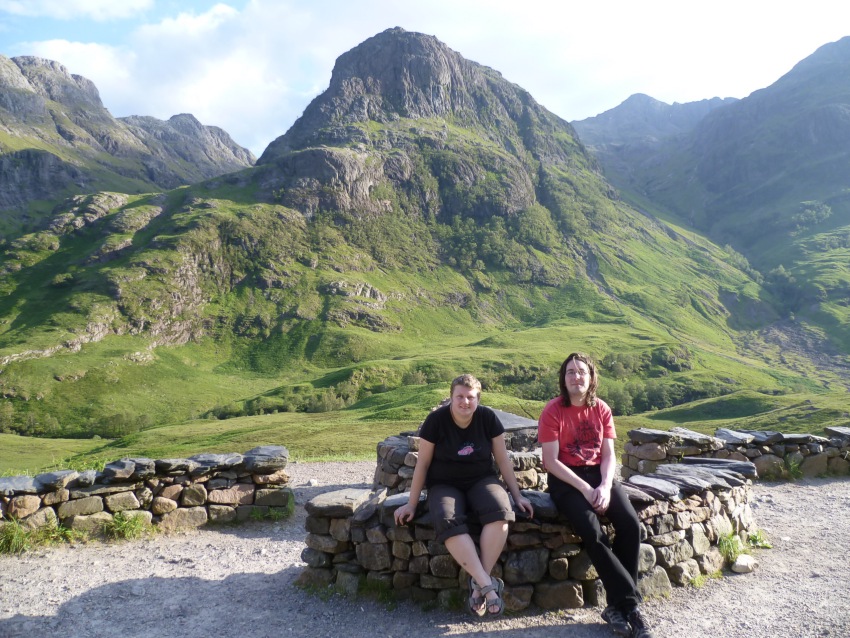 oh by the way, our mate fixed a short (4mins) movie with our achievements. guys, this is how we enjoyed ourselves and definitely this should not be treated seriously

Nice report blueyed,and some fine pictures also,just one thing thats bothering me,when you replyed to my report you said you did this walk the day after me,but I also did this walk on Sunday 3rd july,alan s & I left the carpark earlier than you around 8.00am.

Excellent report. Stunning pics on a pretty good day weatherwise. Weather in Glen Coe was great on Saturday too. Unfortunately I was only passing through on the way home.

gammy leg walker wrote:Nice report blueyed,and some fine pictures also,just one thing thats bothering me,when you replyed to my report you said you did this walk the day after me,but I also did this walk on Sunday 3rd july,alan s & I left the carpark earlier than you around 8.00am.

looks like i got confused with the dates :/
oh damn it, gammy, we could have met!

Wow, that looks awesome!! Great pictures, some of them are quite surreal. An amazing area up there. Can't wait to climb these hills.

excellent report, lovely pics and even enjoyed your video

can`t wait to go there

Those pics are amazing, it looks a fantastic area to explore.I like your pics on your day at Brimham Rocks too.