Otherwise known as playing ‘where’s the path’ on Luinne Bheinn.

This was the second day of my June trip to Knoydart and includes Luinne Bheinn. As it was a decent day and the photos have come out ok I’ve posted them for people to hopefully enjoy. The rest of the week didn’t involve any major climbs and the weather was more mixed so I won’t be posting them separately, although as always I will add a brief note in my Walks Diary as I like to keep a record of my Scotland trips.

Having arrived at Inverie by the ferry from Mallaig on the Monday I spent a pleasant night on the camping ground at the Long Beach – made all the better by the fact that the regular rain showers dried up and it was a dry night and the views back to Rum were excellent. After the cloud and rain of the previous day, it was good to have high cloud, some blue sky and sun as I walked up the glen past Loch an Dubh-Lochain. I’ve read some articles that suggested this was a fairly featureless glen, but I was taken by it – possibly because of the solitude and peacefulness. I was puzzled by the number of cow pats on the path leading up to the lochan as I couldn’t see any cattle, and didn’t see any for the rest of the day. It was only on the return journey that I found the cause – and had the experience of walking through the middle of a herd of highland coos... 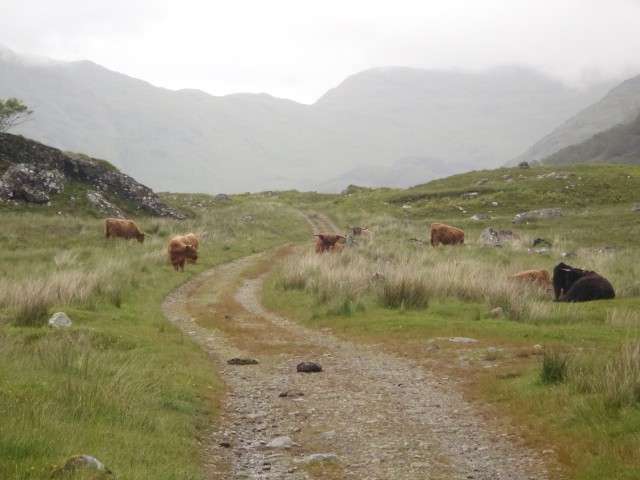 Anyway, back to today.

A steady walk took me to the Mam Barrisdale pass and then I took the obvious path on to Luinne Bheinn. Not paying a great deal of attention I followed the path following the line of the boundary fence, and kept following it, and kept following it. It will head upwards anytime soon I thought ... only it didn’t. Realising I was walking parallel to the summit ridge at a height of 750 / 800 metres I finally decided to cut upwards. A bit of improvised path finding and I was on top, and picked up the obvious path coming up the west ridge.

Not a major problem and I now know the way down, or so I thought.

The views from the summit of Luinne Bheinn were excellent, although the one looking towards Ben Nevis has not got the colour I’d hoped for, but I’ve included it anyway. As it is the first time I’ve been this far west in Scotland with my walking (since my younger days), I was stunned by the views over Ladhar Bheinn and out to the Syke Cuillins. Probably all old hat for a lot of people, but I don’t get here often so bear with me! For the descent I followed the obvious track down the west ridge until it petered out at a boggy patch, picked up again over the next rise before disappearing again at next boggy patch. A path of sorts seemed to re-appear further on but as it seemed to be leading me to a steeper section I cut my losses and followed the easier slope back down to the path by the old boundary fence.

No great dramas as it was a clearish day and no real danger of wandering over any edge, but it was a useful reminder in the need to keep concentrating even when it all looks straightforward. The misleading presence of a man-made feature in the boundary fence with path alongside also contributed – when you are slogging upwards on a boggy path it is easier to keep following the ‘obvious’ route.

Once back at Mam Barrisdale I followed the path down to the Barrisdale bothy camping ground where I spent a pleasant evening sat in the sun – only me in Barrisdale – a perfect place. Another small group, who had kayaked in from Kinlochhourn arrived later, but that didn’t spoil it. All was peace and solitude ... until the ranger arrived back at this house and turned on a noisy diesel generator that he ran from 9pm to 11pm. Oh well – modern life has to go on.


Scot2011-Act-Day2-18-Inv-Barr01.gpx Open full screen  NB: Walkhighlands is not responsible for the accuracy of gpx files in users posts