The winding single track A838 road from Tongue Youth Hostel circumnavigated Loch Eriboll and then followed the coastline before eventually reaching the start point of our Foinaven walk, just to the west of Gualin House.

We had read that the lochan-dotted land between the road and the foot of Foinaven was extremely boggy, so we started the walk with some trepidation and with gaiters fitted.

However, we were pleasantly surprised that underfoot conditions weren't that bad after all – perhaps because of the recent dry weather. We saw what I think was a golden eagle, soaring overhead... Once the flattish walk to the bottom of the hill was complete, we had some mild scrambling to do before reaching the ridge where we were treated to views across to the summit and up Strath Dionard. Clouds started to form but the wind meant that they were constantly moving, and views across the surrounding landscape kept disappearing and appearing... Looking down the Coire Duail 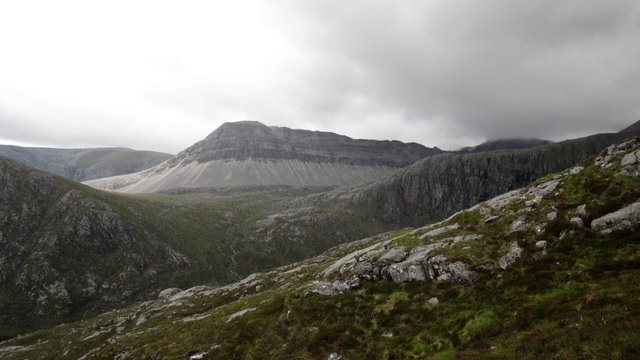 Approaching Ganu Mor in the cloud

The views from the summit were breathtaking.

We decided that rather than continue along the ridge and down A Cheir Gorm which looked particularly 'scree-y', we would instead descend the Coire Duail to the northeast. We descended towards the Strath Dionard, and opposite us the Moine Thrust was clearly visible. 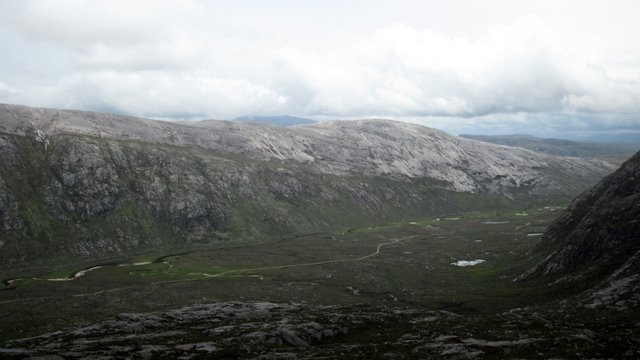 The Moine Thrust and Strath Dionard

Lower down, the slopes were dominated by huge slabs of rock - wouldn't like to walk on these in icy conditions! 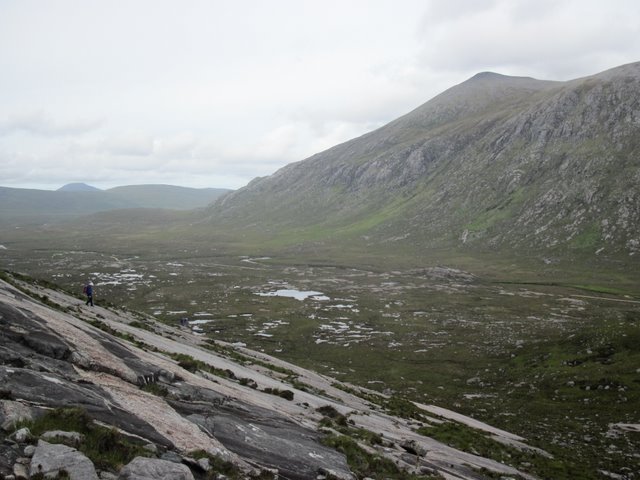 The last leg of the walk was along the track from Loch Dionard, beside the River Dionard along which there were many fishing 'points' (are they called beats? I'm not sure... anyway, apparently the river is one of the best for salmon and sea trout).

Another great walk in a brilliant part of Scotland.

foinaven approx route.gpx Open full screen  NB: Walkhighlands is not responsible for the accuracy of gpx files in users posts

Driving up to Lochinver while you were heading up Foinaven. Some cracking shots

Assynt has been busy of late with Walkhighlanders

Hope you had a good time in the Lochinver area - I was so tempted to take a diversion and drive home that way, to visit the pie shop...

Assynt should be a well-kept secret so it doesn't get over-run! (One tourist per 10 square miles sounds fine to me..). It's a brilliant area... we had 3 days of walking there - 3rd day was Ben Klibreck - walk report just published.

Hope I'm not blowing your well-kept secret by posting here

Foinaven is such a great hill, and seems to be rather overlooked (which is probably a good thing as you say). Some nice shots there, and looks like you took a similar route down to the one we went up. It looked like there was scope for 3 or 4 more different route choices on the NE side of the hill - must go back sometime to explore some more of them.

Impressive pictures, really nice! I remember eyeing up Arkle and Foinaven in 2004 when I was walking past on the Cape Wrath Trail. I was quite taken with the interesting 'architecture' of both hills. Your pictures capture that beautifully!

I think the secret has already been blown, malky_c!

Thanks Paula! Yes, the hills have real architectural interest! I thought the Moine Thrust was quite something.
Would you recommend the Cape Wrath Trail then?

Fit like Tom? Noticed the siggy so ye must be fae roon aboot Inverurie?

Nice to see this report - Foinaven is defo a must-do for me.

Kevsbald - Ay ay min, I do indeed bide in Inverurie.... although I moved here from Englandshire so my Doric isn't very convincing!

Yes I highly recommend Foinaven - almost as good as Suilven!

Well I hinna deen that ene either so I best get up there! Ye'll soon catch on wi the doric, it's an affa strang dialect nae till.