We parked a couple of kilometres south of Vegastie and walked a short distance up the road, entering 'Mackay Country' (the Province of Strathnaver). The summit of Ben Klibreck seemed miles away (well, I suppose it was - 4 miles away in fact). We set off up gentle grassy slopes, towards Cnoc Sgriodain. It was very warm with no wind, so the ascent was hard work. However, we were soon rewarded with extensive views across Strath Vagastie and over to Ben Hope and Ben Loyal. The summit still seemed a long way away though...! 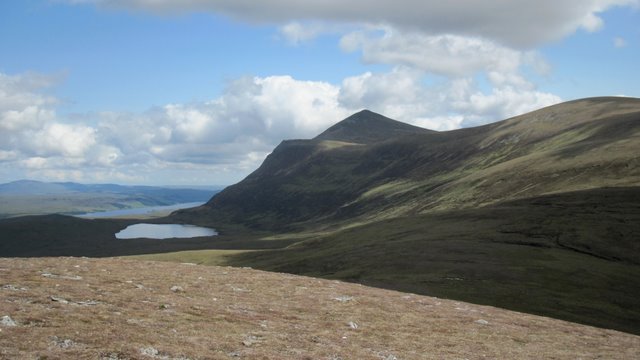 A golden plover was close by, whistling away probably to distract us away from its chicks. We also discovered a common lizard basking in the sun – in fact during the course of the walk we came across more than ten – the hill was a hot spot for them! After about an hour more walking, we reached the well-used path on the shoulder to the north of Creag an Lochain, which made for easier walking.

Closer to the summit of Meall nan Con, there were several pieces of weathered deadwood, sticking out of the ground – very strange – I wonder how long they have been there... 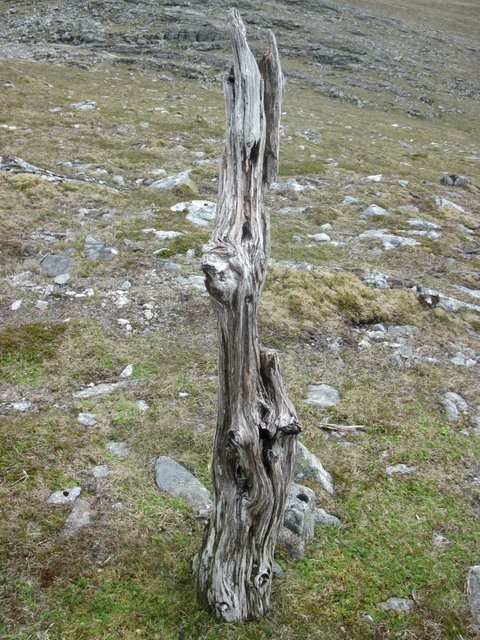 The top of the hill was 'busy' (relatively speaking – we had only seen one person on the hill up to now). We passed a few walkers who were descending from the summit, and overtook one hillwalker who was wheezing up the hill – it didn't look like he was enjoying it much!

For the third day in a row, the views from the summit were far-reaching and outstanding in all directions. We debated options for our return route – we could use any one of three ridges to descend to Loch Choire or Loch a' Bhealaich, and we opted for the ridge to our immediate south. We passed close to Loch an Fhuarain which sat below steep cliff sides. We passed yet more common lizards, and descended a fine example of terraces caused by solifluction (“the slow downhill movement of frost-weathered debris resulting from seasonal freezing and thawing and melting of ice lenses” according to 'Hostile Habitats'. Each hillwalk is like a geography field trip!). 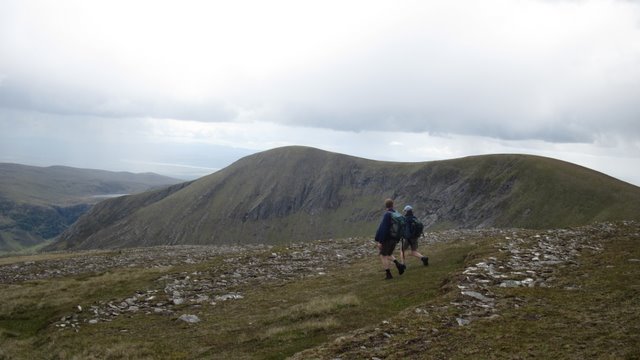 The path alongside the loch was much rougher than it seemed when viewing it from a hundred metres higher up. The last three days of hillwalking had finally caught up with me, and I felt very tired. I made slow progress towards the high point of the path at the Bealach Easach. With excellent timing, now that we were off the hill, it started raining! We reached the bealach and a rainbow had formed over the loch. Having not been following the map very closely, I was assured by one of my fellow walkers that the end point was not too far away now. However, after leaving the enclosed bealach and reaching more open ground we could only just make out a far-away group of trees - next to which we assumed our destination was. It was another half an hour before our goal – the Crask Inn – was plainly in sight. We upped our pace – the thought of beer and perhaps a meal was overwhelming... We finally reached the inn, and what an inn it was – crackling fire (even in this the height of summer), small bar which sold my favourite Black Isle beer, friendly resident dogs, and even an old copy of 'Tree News' to read! Our Ben Klibreck route.gpx Open full screen  NB: Walkhighlands is not responsible for the accuracy of gpx files in users posts

Some excellent photos there GT. There's a chance I might manage to squeeze this one in on a visit to Sutherland at the start of August. It's amazing too how the sight (or even just the thought) of the pub at the end of a long day can really spur you on. That's all that kept me going on the long walk back out from Slioch to Kinlochewe a few years back.

Thanks, yes I highly recommend the hill in good weather! And yes, I agree - the sight or thought of a pub at the end of a walk really spurs you on - in fact coffee and cake shops do just the same...!

Excellent report GT. Some excellent views of the surrounding countryside from the top. I saw zilch

I also just backtracked the way you went up so nice variation.

Hi Monty, yes our descent was interesting, but the walk out on the 'track' (of sorts) was a bit of a trudge, especially when the track just about disappeared in the bog between the hill and the Crask Inn! However, of course ending up at the inn made it all the more worthwhile!