It took a wee bit of organising but eventually managed to get out with my brother to walk Lochnagar. The plan was to start there and see how the weather/mood/fitness levels were taking us.

I told him I'd like to try for all five on the circuit if we could and told him it was about 12 miles or so. Oops.

The forecast was for the weather to brighten up mid-morning and as we drove along Glen Muick we could see Lochnagar slipping in and out of (but mainly in) the cloud. I was a bit wary as neither of us had been up Lochnagar before but brotherly bravado forced us onwards.

After a bit we came to the crossing. Too early to get wet feet.

I stopped to take a pic of my bro crossing, but managed to drop my camera staright into the water. Thankfully it's my old mobile and not too important. I found it quickly but the piccy taking was curtailed a wee bit for the rest of the day.

We followed the path and turned left at the wee cairn to climb Lochnagar. I'd read some reports but I wasn't really prepared to see what seemed like a row of giant teeth sticking up into the air. The blowing cloud added the dramatic effect but seeing the cliff face for the first time was breathtaking. We pressed on up the ladder and soon found ourselves at the summit with cloud sneaking in towards us from the cliff face. Not having walked in cloud before we didn't know what to expect so we headed quickly for the summit where the cloud surrounded us. At the summit in the cloud.

As quickly as it came in though, it went. After a bite we headed back the way we'd come from to head to Carn a Choire Bhoidheach. Not the most exciting of summits but it counts as a Munro. A couple of pics taken by bro then we're off again towards Carn an t-Sagairt Mor. This part of the path was a wee bit of a boggy trudge in places but on the way up I remembered about the Canberra plane crash that I'd read about so we were keeping our eyed peeled and trying to avoid puddles at the same time. We followed the path around the base before climbing from the south, still seeing nothing of a plane. Having reached the summit, with rain starting to fall, we had a wee look around down the slopes to the north east and saw a few bits and pieces of the plane. 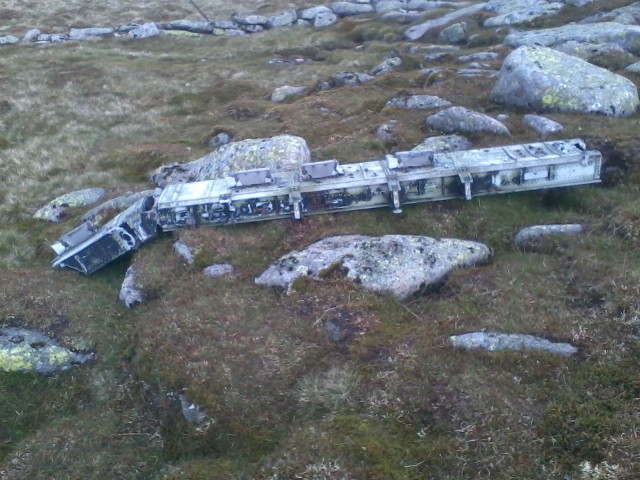 A piece of the Canberra

We climbed back to the top then back to the path towards Cairn Bannoch for another bite to eat. We then set off south east for Broad Cairn but by the time we got to it the rain was pouring down. Looking around me the sky seemed to be clearing but the rain wasn't so we barely stopped at our fifth summit of the day. As we decended through the Broad Cairn boulder field (not the easiest part of the day), Loch Muick was just about in view when, for the first time in my life, I found myself looking DOWN on a rainbow. Weird. Somewhere over the rainbow.....

We took the high road back (rather than cutting directly down the path to Loch Muick) and got some great views over the loch as we walked. Glas allt Shiel looked fantastic set in the forestry but my camera by now had given up the ghost.

To descend to the level of the loch we walked down the zig zag, hairpin bend path, and were fairly amazed to see landrover tracks on it. Rather that driver than me. My knees were now aching as I walked down the hill but eased again when we hit the flat. Having mentioned this later to a mate he told me a story of someone he knows who did a lot of Munros in years gone by and wrecked his knees so I reckon I'll have to invest in some walking poles.

As we headed back to the car park, it was about 6pm, we tried to count the number of deer around us in three herds. I lost count at about 120. My phone pics don't do the encounter justice I'm afraid. Lots and lots of deer.

It took us about 9 hours and it was only when I spoke to my brother the next day he told me we'd walked 18 miles, not the 12 I'd told him. Despite the miscalculation (I'll look more closely at walk reports next time) we were pleased with our feat. It was his first Munro bagging experience so he was chuffed to get 5 in a day.

Nice report and pictures. And timely for me too, as these five have just made it onto my to-do list in the next few weeks

rockhopper wrote:Looks like you had a good day out

Thanks rockhopper. I was a wee bit wary of my first wander in the cloud on Lochnagar but it was only for a short time and I'm better for the experience.

PeteR wrote:Nice report and pictures. And timely for me too, as these five have just made it onto my to-do list in the next few weeks

Cheers PeteR. A highly recommended walk and I hope you enjoy your day as much as we did.

The wife and I completed a very similar route a year past November (when the temp guage on the car reached -16 through Glenshee). We came back in the dark along that LR track at the end of a long but very satisfying day. At the bottom of the last munro, we met the ghillie who was stabling the ponies having been out and shot a deer. He and presumably his client (or apprentice!) headed off along the track in their LR. We could see the brake lights in the distance still at the same height as us, and they seemed to pause for quite a long time - however - they then carried on down the ziz zag / hairpin bend.

There were no LR tracks left that day.....mainly because there was about 2 inches of ice on the surface!! I'm sure you'll recall there's not much room for error on the track (or esle you're in the loch) so he must be [i]very[i]well practised!!! We struggled to get down on foot!!!

This day is probably one of the best in my memory, although we did have blue skies all day and with little wind, we never really felt the cold too much (apart from the killer breeze on Lochnagar itself). I was glad we were staying in Ballater though (and had booked the excellent local Italian).

Well done on doing the 5 which is most certainly further than 12 miles!!

Very brave of you both Gary to head out in that temperature. I may get there one day but for now I'll stick to relatively better conditions (although some of the winter pics on this site make a snowy walk very tempting).

I've been out on a few Munro/hill walks now but the achievement and scenery of this 5 is definitely my highlight so far. A walk to remember, until I do it the other way round sometime. NOT in a Landrover though.

Keep up it and there will be many more memorable days to come! The cold really was secondary to the fantastic day out we had!