I was needing to get back into a wee bit of hill fitness having had a holiday in Majorca in the sun without ever thinking about attempting some of the fine mountains on that wee island. So Beinn Chabhair seemed a good choice. It was the one remaining "Crianlarich Munro" that I still had to climb and as a single hill it looked like a reasonably short day - and I had to be back in Cowdenbeath for an evening meeting. So I made the long drive from Fife via Crianlarich (almost two hours) and the first thing I noticed was that the road was descending quite a lot towards Inverernan! I got parked and soon was heading for the hills - taking care not to head through the camp site at Beinnglas Farm. The entrance to Beinn Glass Farm

Behind the farm the path rose steeply up the hill side - parallel to the burn. After I had been climbing some time I stopped for a rest and remembered to turn my GPS on. It said I was at 66 metres altitude! I thought I must have already climbed 200!

So maybe I wasn't so fit! But the sight of the waterfall on the Ben Glas Burn refreshed me. Although it took me a little while to realise that the path continued up the hill just before you reached the waterfall. After much effort I finally arrived up above the waterfall with the path ahead and the hill of my choice rising before me. The path to Beinn Chabhair

This was one of those paths that was good in places but boggy - and slippery - in others. I really don't like boggy paths

but I just had to make the most of it. And there were some really pleasant waterfalls further up to cheer me on my way. 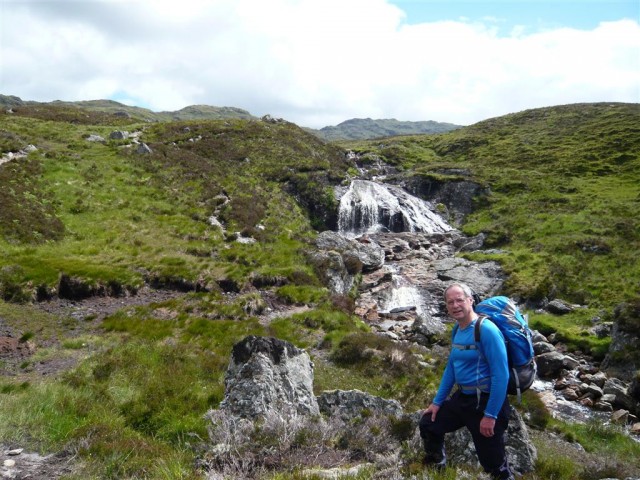 Just before Lochan Beinn Chabhair I headed off north-east towards Meall nan Tarmachan and was soon glad to be climbing clear of the boggy ground and heading for the ridge. Once on the ridge the walk became much more pleasant with the path meandering around lochans and up, round and over a wonderful landscape of hummocks and crags. A lochan on the ridge I loved this part of the walk.

It was so varied and interesting! It didn't seem long before the summit came into view behind a subsidiary top on the way. The summit of Beinn Chabhair comes into view

So it was fine to rest at the top and take in the view. You can see Ben Lomond in the background of my summit picture - over to the right! The summit of Beinn Chabhair

The views were great from the top. The Crianlarich Munros were very clear with the cloud just touching Ben More and Stob Binnein. Ben More and Stob Binnein in the distance

There were great views towards Ben Lui too - but it was looking a bit dark over there! Ben Lui and beyond

As I began my descent I could see the mysterious Lochan Caisteil high up on Ben Glas. I would really have liked to have descended that way but I suspected it would take longer and I didn't think I had the time to go down that way. The journey down the ridge proved to be even more fun than the climb up! Down the ridge of Beinn Chabhair

At one of the lochans I met for the second time the only other walker I had seen on the hill. I had passed him earlier on the way up. It was a quiet day on the hill!

You can just see a little red figure on the path below if you look very carefully! A walker in the distance

It was down to the boggy path again for me. Soon I was back at the burn and looking up at Beinn Chabhair with the sun now coming out on its slopes. Beinn Chabhair in the sun

I decided to follow one of the several "alternative paths" that stayed a bit to the north of the Ben Glas Burn - cutting the corner a bit. But I have to say it was worse than the regular path - okay if you like bogs, but not my kind of thing! Eventually I arrived back at the top of the waterfalls ready for the final descent! Approaching the head of the Ben Glas Waterfall

It was much quicker down - but still some care was needed. The path is quite eroded in places. 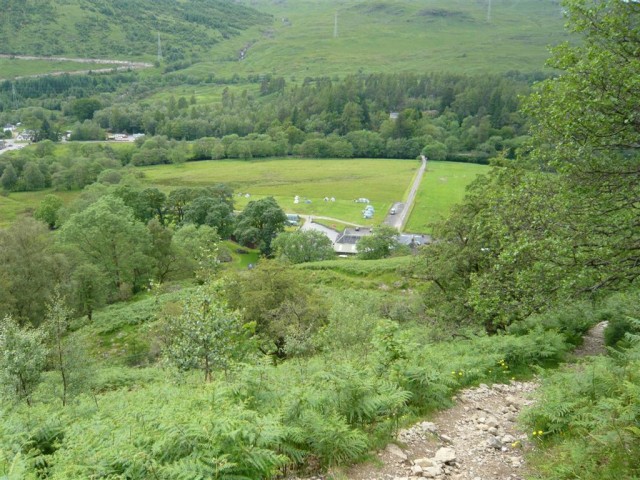 The descent to Beinnglas Farm

I enjoyed the walk especially the ridge section from Meall nan Tarmachan to the summit of Beinn Chabhair. I must admit it was harder than I had anticipated - or maybe I was just a bit unfit!

I definitely deserves the Walkhighlands bog factor of 3 - I would give it a 4 myself! But once I was out of the bogs it was worth every bit of the effort!

Nice one Redrock, good for you getting the legs going again after being tempted by the Majorcan peaks!

This is still on my to-do list. 1perhaps I'll leave it for the winter when it has a nice covering of snow

- it's a very long time since I was up this hill but can still remember it being boggy even then.
Same for me - the sun always seems to come out at the end of a walk

Ahhh, so there is a path to Chabhair, just not the way I went!

Quiet day when I was up there at the weekend too, didn't see a soul.

Bod wrote:Nice one Redrock, good for you getting the legs going again after being tempted by the Majorcan peaks!

Thanks Bod, I reckon the Majorcan peaks would have been far less boggy!

This is still on my to-do list. 1perhaps I'll leave it for the winter when it has a nice covering of snow

Cheers, Pete. Some nice crunchy snow would definitely make a big difference to the boggy bits!

- it's a very long time since I was up this hill but can still remember it being boggy even then. Same for me - the sun always seems to come out at the end of a walk

Thanks Rockhopper. How does the sun know that we've just come down the hill?

Rossco wrote:Ahhh, so there is a path to Chabhair, just not the way I went!

Quiet day when I was up there at the weekend too, didn't see a soul.

Aye Rossco, but paths on the hill can often be quite deceptive. Sometimes they go the way you want to go - other times they lead you astray (or into a bog!

) and other times they just disappear! My path that day did the bog thing!

It was quiet, Rossco. I reckon this must be one of the less frequented Munros - a bit less walked than Ben Lomond for instance!

- it's a very long time since I was up this hill but can still remember it being boggy even then. Same for me - the sun always seems to come out at the end of a walk

Thanks Rockhopper. How does the sun know that we've just come down the hill?

Given your occupation, redrock, I suspect you could answer that one better than me (sorry, couldn't resist)