A month since I got back to the UK, and life seemed to be getting in the way of being out on the hills. In addition to that, with some time off looming, I managed to injure (possibly fracture) my rib, which made vigorous exercise painful. Today was supposed to be a bit of a test run - a gentle amble up Fuar Tholl and then possibly on to Sgorr Ruadh if things were going well.

Despite driving the Garve - Strathcarron route possibly 100 times in the last 5 years, I'd never been this way on the train before. While it took a bit longer, it was a very pleasant way to start the journey, and had the convenience of landing me right at the start of my walk. Achnashellach station is a request stop, and thankfully the train did stop, with just one other person getting off.


Fuar Tholl.gpx Open full screen  NB: Walkhighlands is not responsible for the accuracy of gpx files in users posts

Unsurprisingly, the other guy was also walking (not many reasons to get off the train at Achnashellach!). He was off around Beinn Liath Mhor and Sgorr Ruadh, so we walked together for the first 10 minutes. While he was aiming to be back for the 3:29pm train, that seemed pretty ambitious, and I didn't see him at the station later on.

I split away from the main Coire Lair path shortly after leaving the forestry track and crossed the River Lair. The going on the other side was steep and heathery, with little sign of use.

Leth Chreag from the start of the ascent: 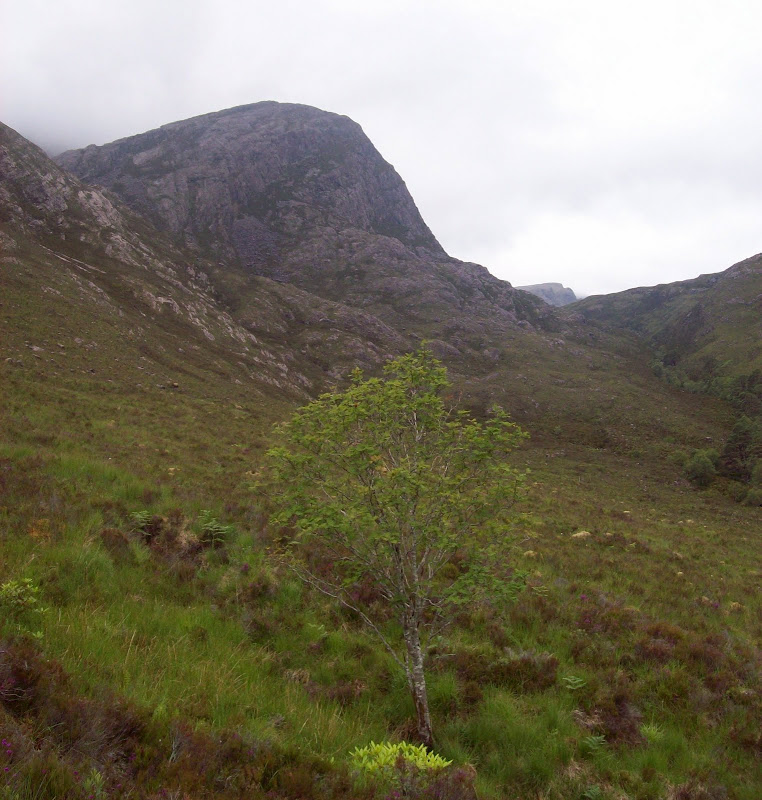 I was aiming for the east ridge of Fuar Tholl, which I had first ascended over 10 years earlier. That had been a perfect day in early autumn snow, and I really fancied repeating it. The normal route up the scree in Coire Mainreachan had never really appealed to me. 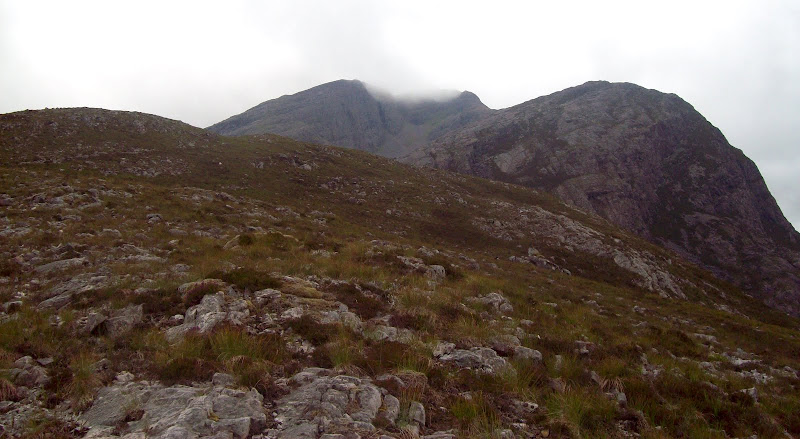 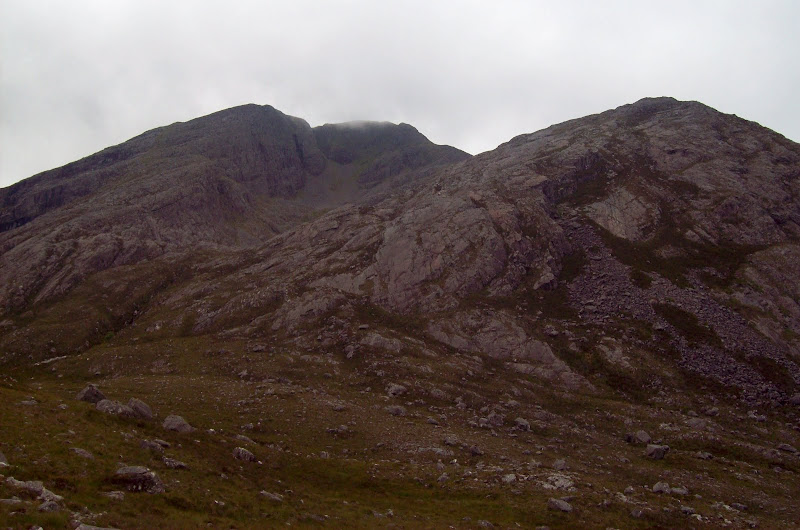 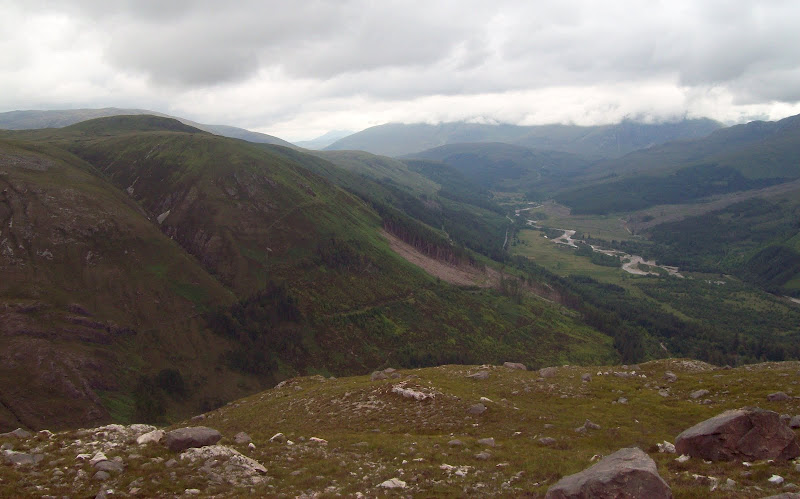 Following the burn up into the upper part of the corrie, a faint path did appear, and soon I was at the lochan. The SE ridge looked interesting from here - much more rock - but I carried on with my original plan to use the E ridge.

South cliffs of Fuar Tholl from the lochan in the SE corrie: 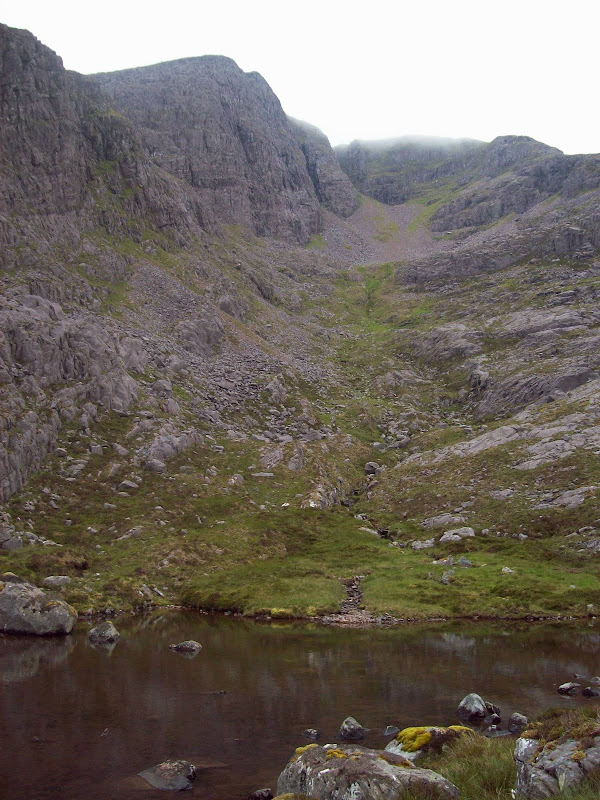 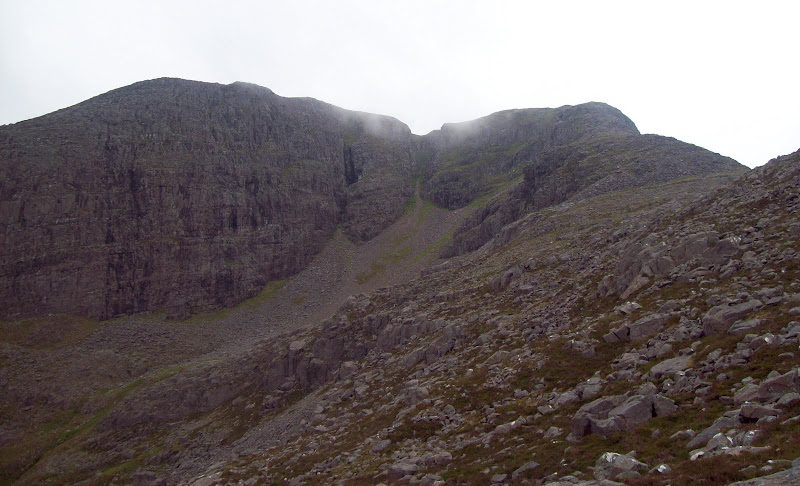 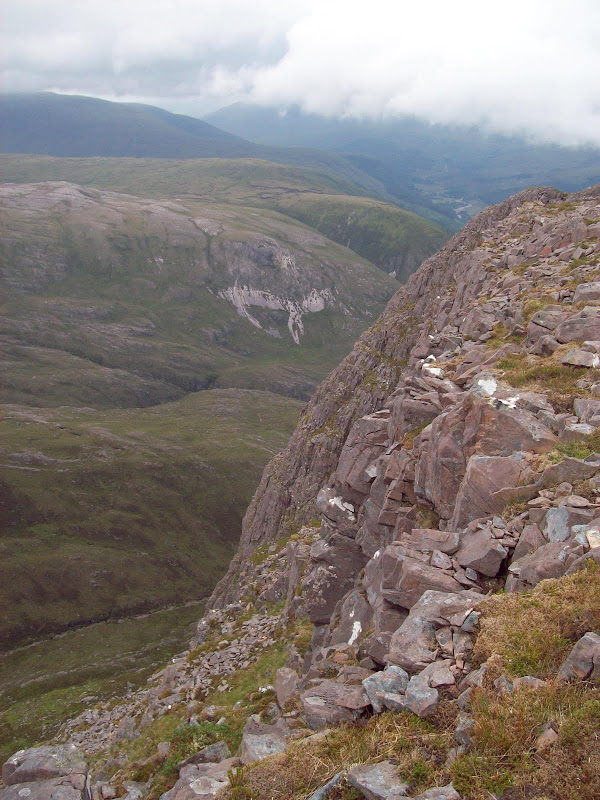 Easy enough to reach the ridge, but it steepened up rapidly. For some reason I'd remembered this route as a scramble, but it was really just a walk, albeit needing a steadying hand once or twice. What I'd remembered as an interesting pinnacle traverse was no more than a slight narrowing of the ridge. Oddly, there was a small sapling at this level. 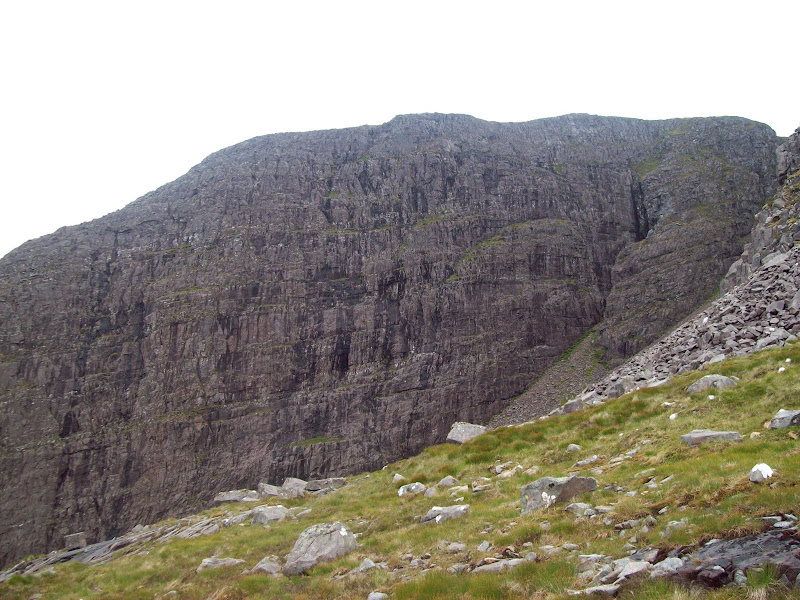 Possibly the highest sapling in Scotland: 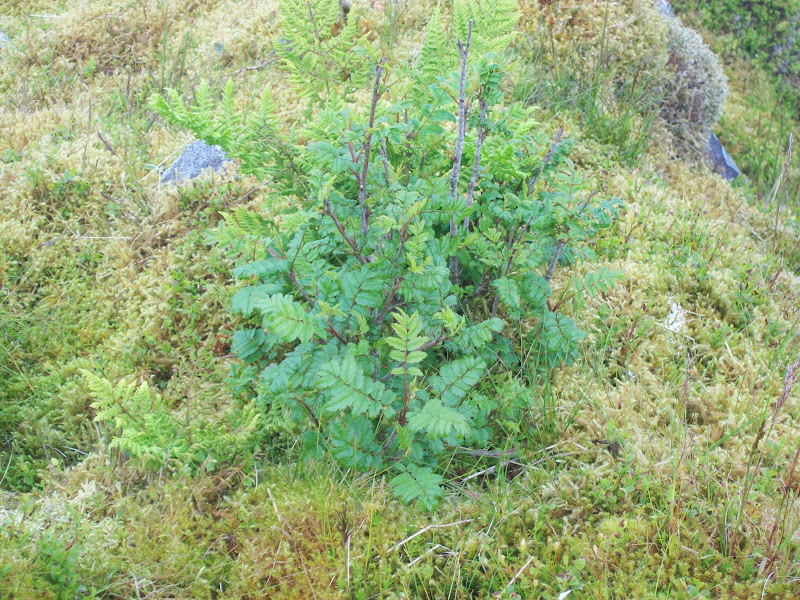 Narrow section on the ridge: 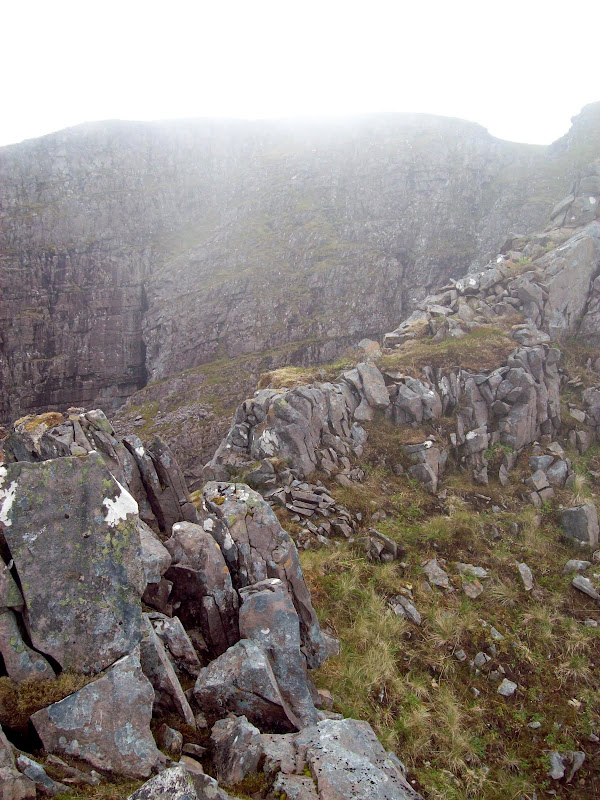 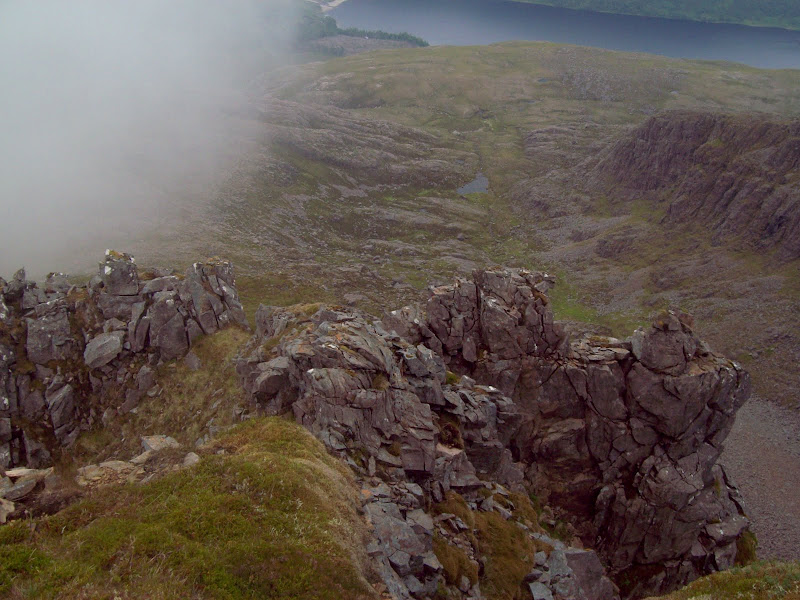 Top of the E ridge: 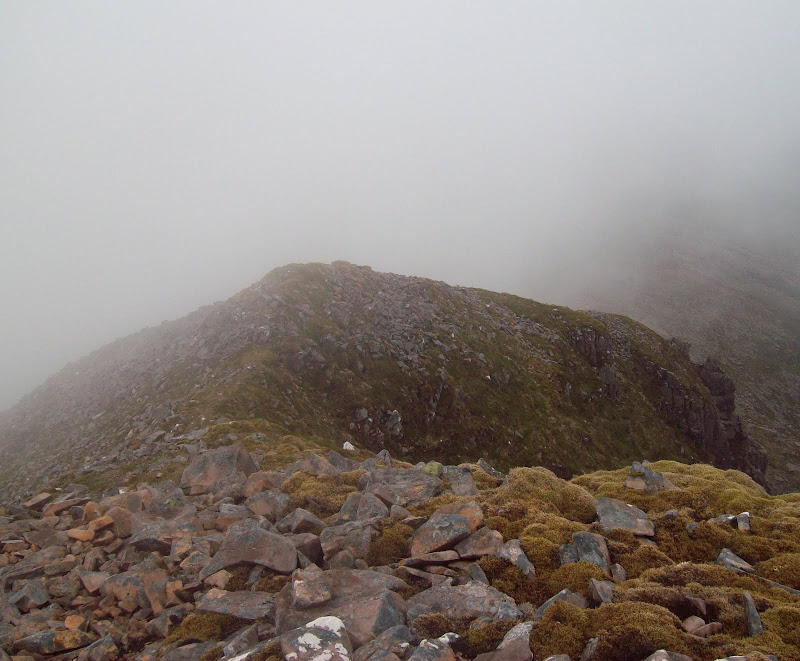 All too soon I was on the summit plateau, which was just in the cloud. Easy walking round the headwall took me past the top of the large gully and onto the summit shelter. I followed the edge a little further for a nice resting place on soft moss.

Looking down the prominent gully in the SE corrie headwall: 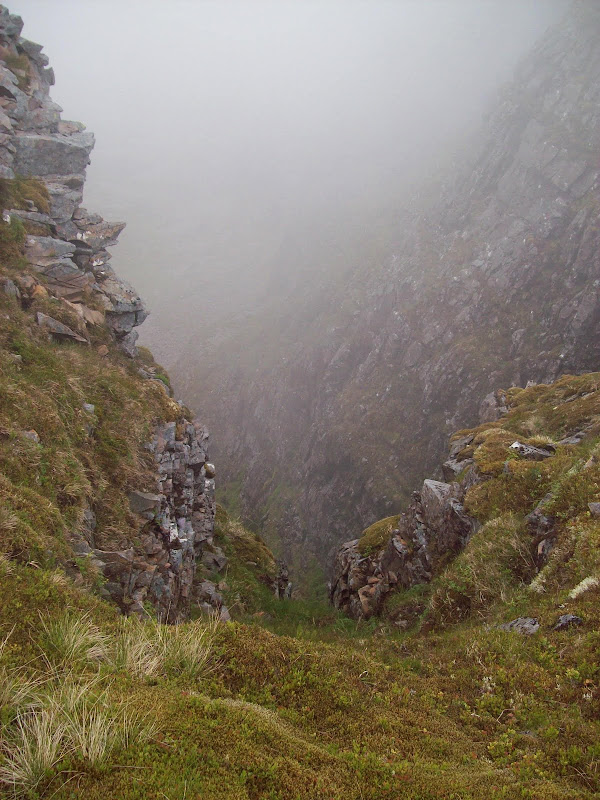 Views across the corrie headwall - could have been better: 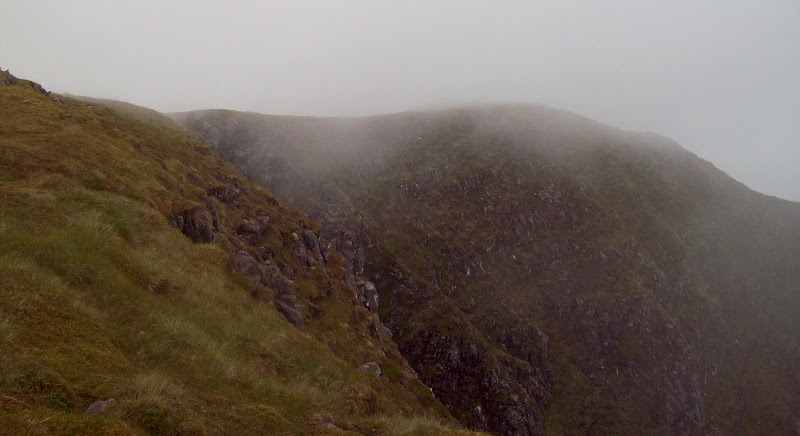 I had a leisurely lunch, but my plans of sunbathing on the summit didn't seem so appealing with the clag swirling around, so I pushed on. My original plan was to traverse all the summits and drop off the west end of the hill, but with no views, I thought I'd give the normal ascent route a go. Slithery scree was fine on the way down, but I'm not entirely sure how this became the most common route up - I still don't fancy the thought of ascending it when other options are available.

Down at the stalker's path, the cloud level had dropped significantly, from 850m down to about 600m. As my rib had given me no problem so far, I decided to push onto Sgorr Ruadh, mainly for the exercise. As I was short on time, I decided I would need to head back down at ten past two at the latest to make the 3:29 train. I took a bit of a guess crossing the lumpy terrain towards the S flank of Sguor Ruadh, but managed to find it OK. If you hadn't been across this before in clear conditions, it would probably present an interesting navigational challenge. 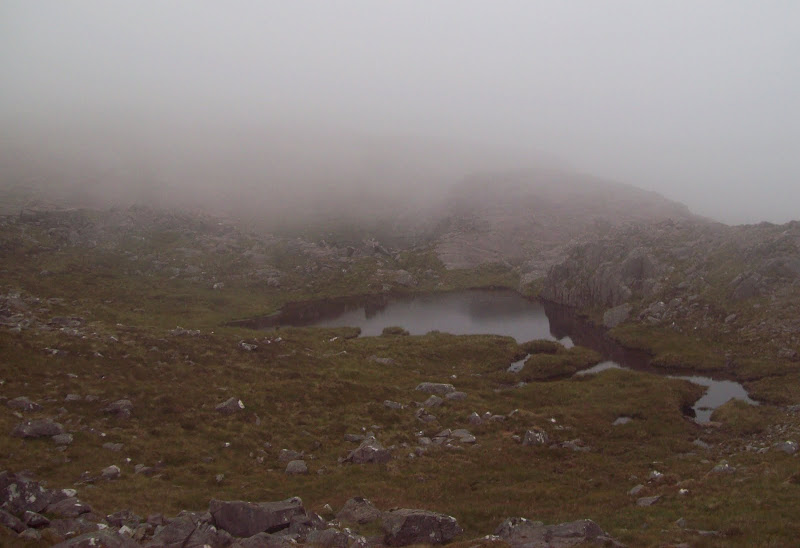 It never ceases to surprise me that a significant path hasn't developed on this flank, as it is part of the usual circuit of the two Munros. Pretty good really. As I neared the summit, the sun almost came out a couple of times, even though the clag didn't lift. I made the summit with a couple of minutes left before my turn-around time. Nothing to see so I headed back the same way.

On the way down the cloud broke, giving some nice views back over to Fuar Tholl and Loch Carron. I scattered a grouse and her chicks - she didn't seem too impressed. 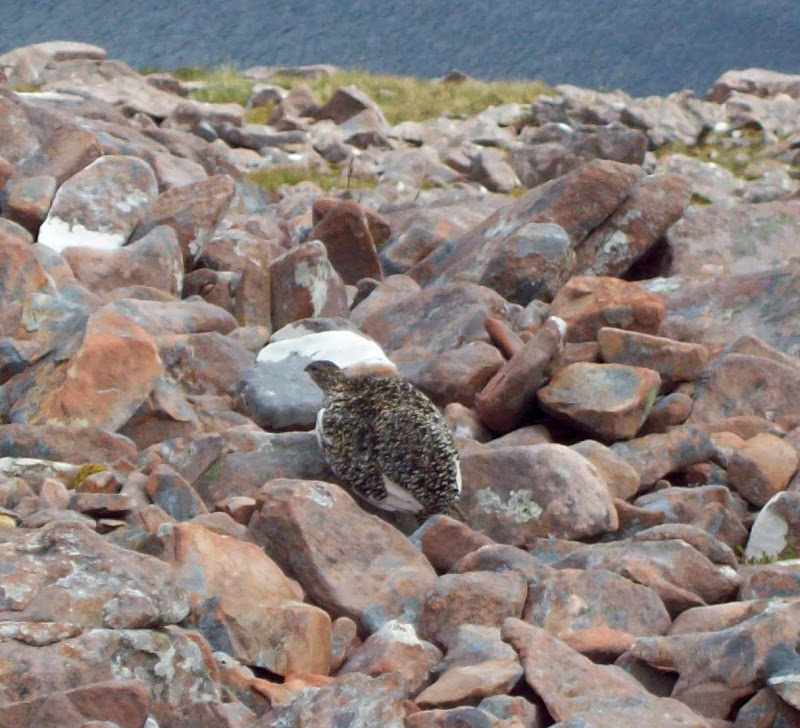 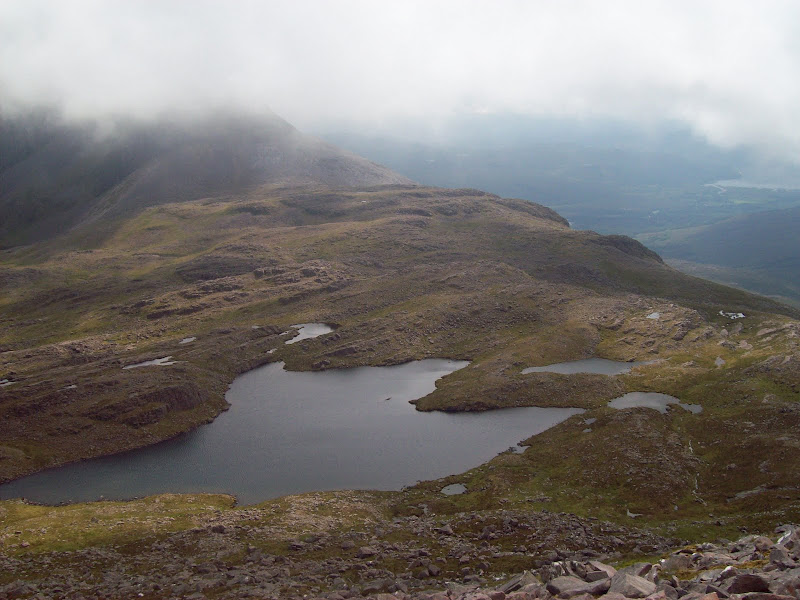 Lochcarron and An Ruadh-stac emerging from the clag: 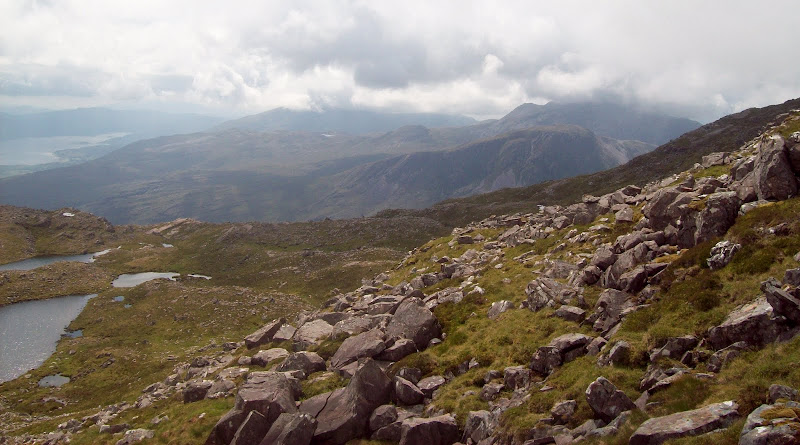 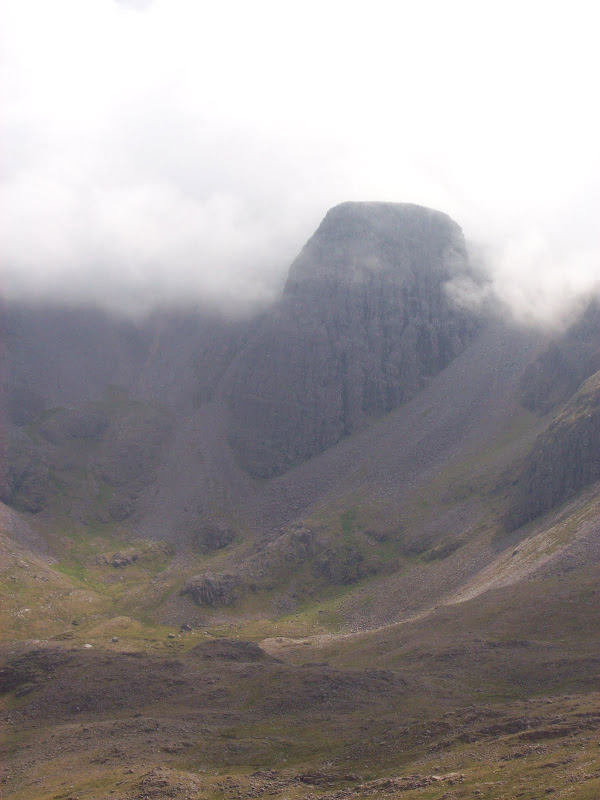 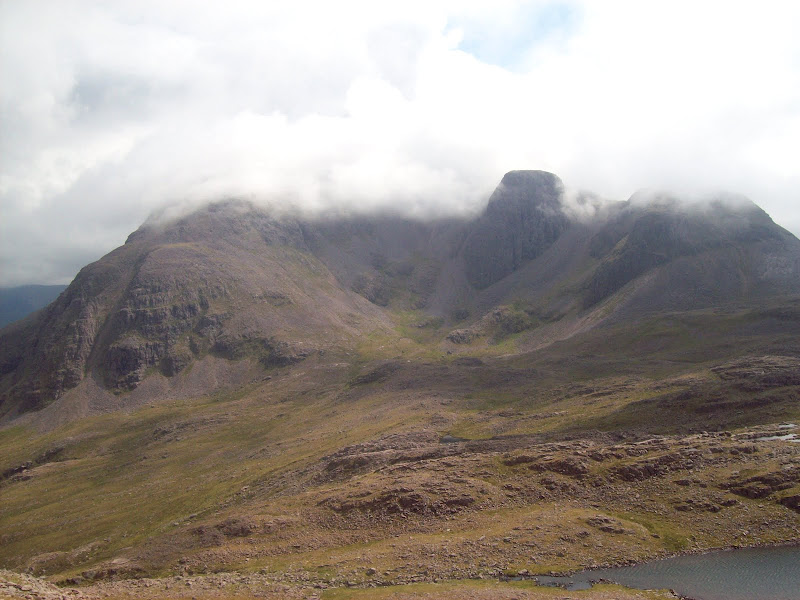 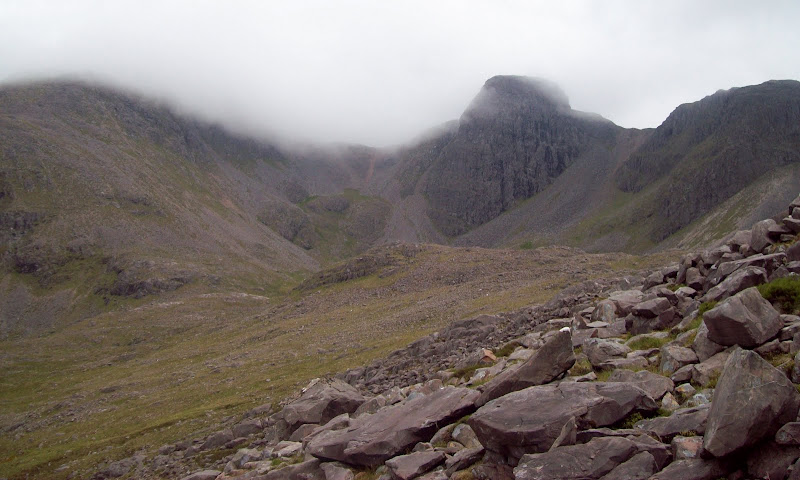 I realised I had quite a way to go in a rather short time, and wished I hadn't been so leisurely at the start of the day. Now would have been a much better time to stop. Shortcutting a corner back to the stalker's path, I had to negotiate a slightly awkward gorge. The shortcut probably wasn't worth the effort. Once on the stalker's path, I ran the majority of the way back down, as I knew I'd be really tight for time. A shame, as views were improving all the time. 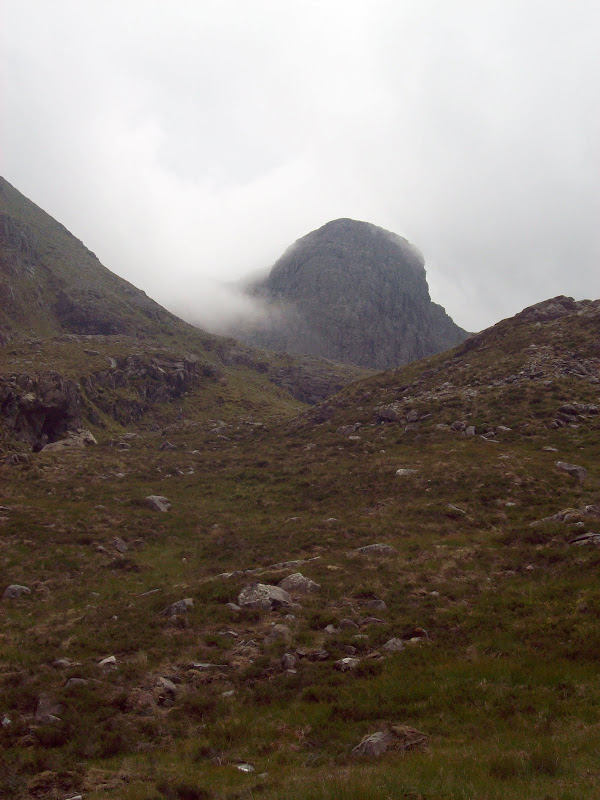 Back to Sgorr Ruadh: 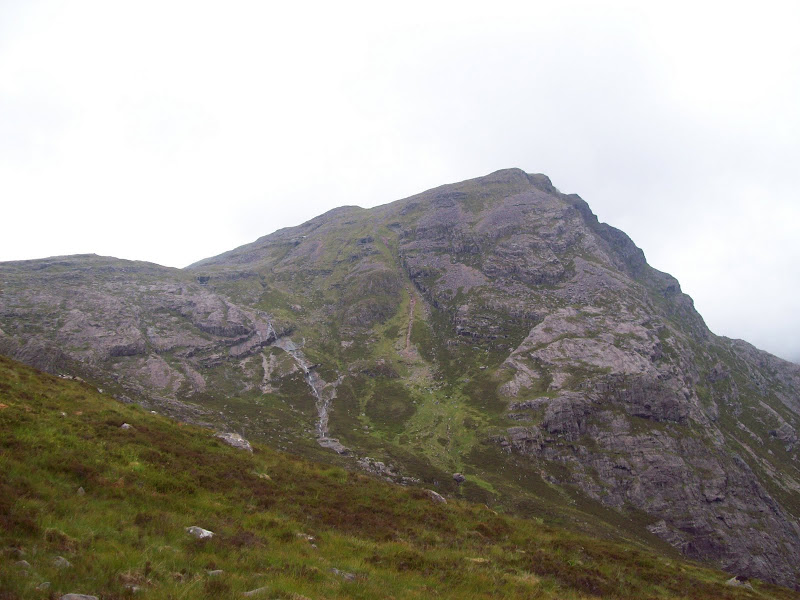 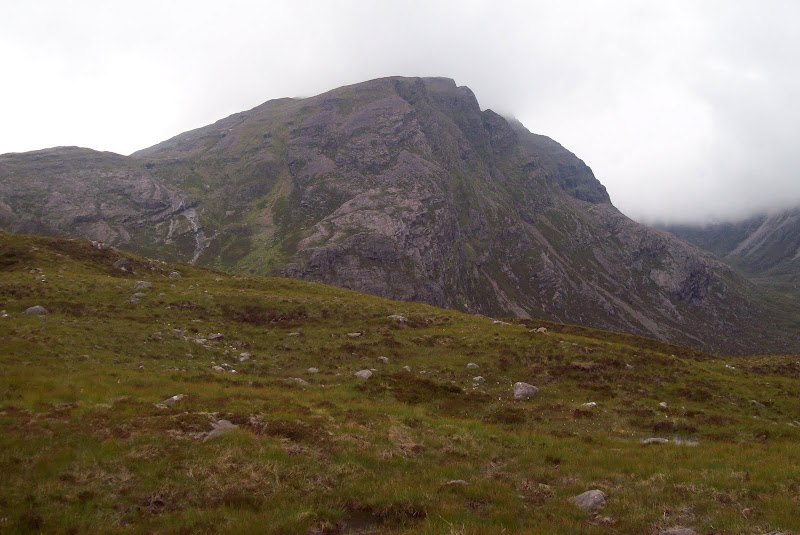 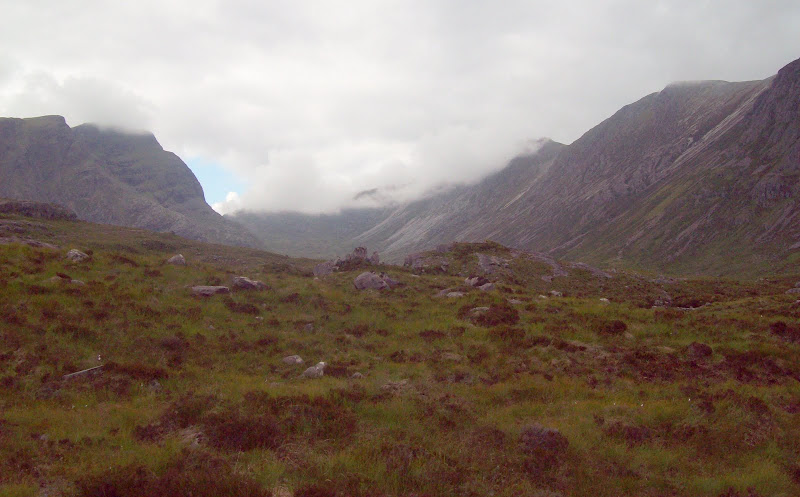 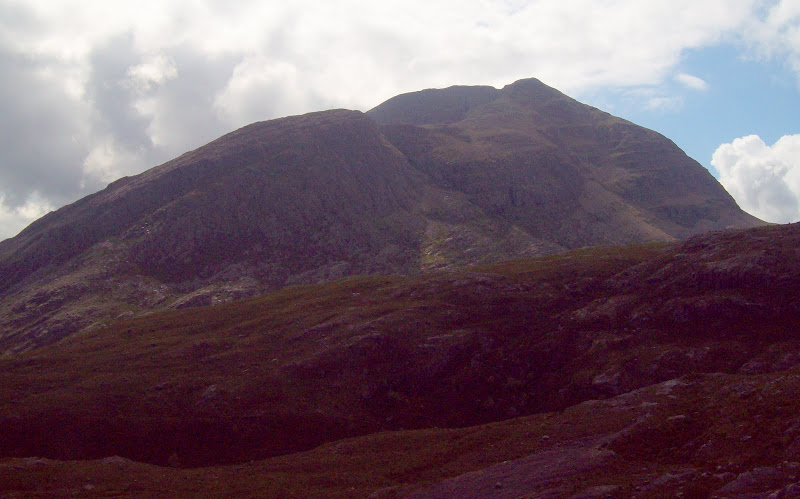 At about 3:20, and only a few minutes from the end, I heard a train pull away from the station. I was just about to curse myself for being so daft, when I decided the train appeared to be going in the other direction. 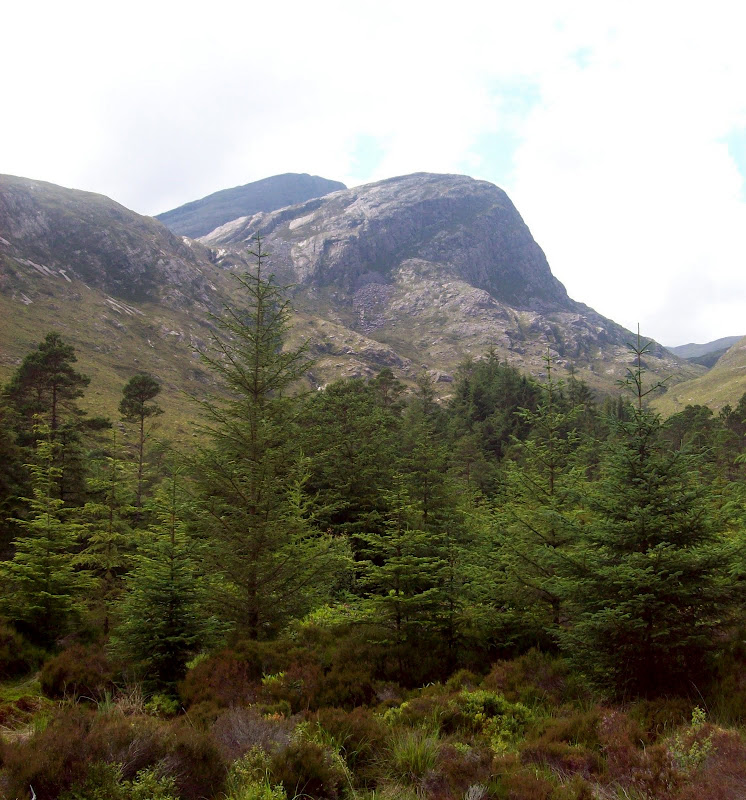 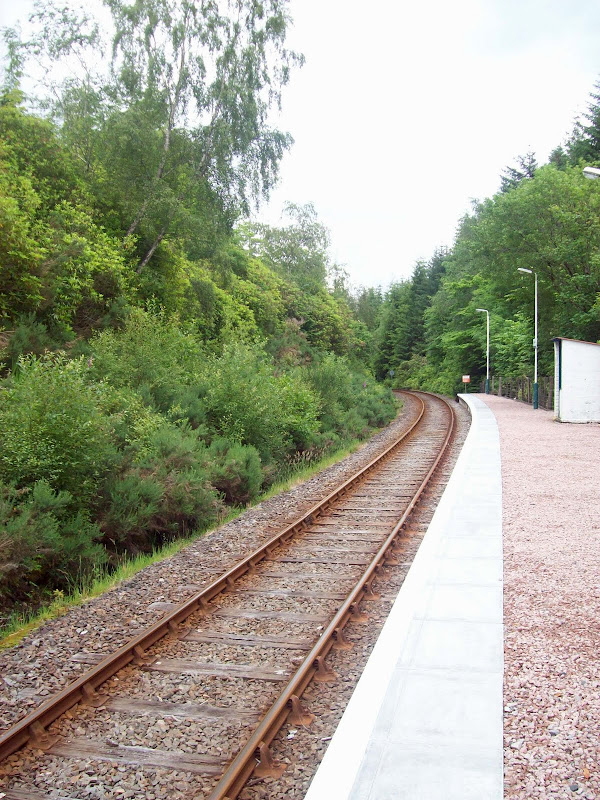 Fortunately I was right, and my train was delayed at Strathcarron, waiting at the passing loop for the late-running Kyle of Lochalsh bound train. As it happened, I made the station with a couple of minutes to spare, but had a good 15 minutes to rid myself of my sweat-soaked t-shirt. It was nice to be able to look back up at Fuar Tholl and my route from the platform. 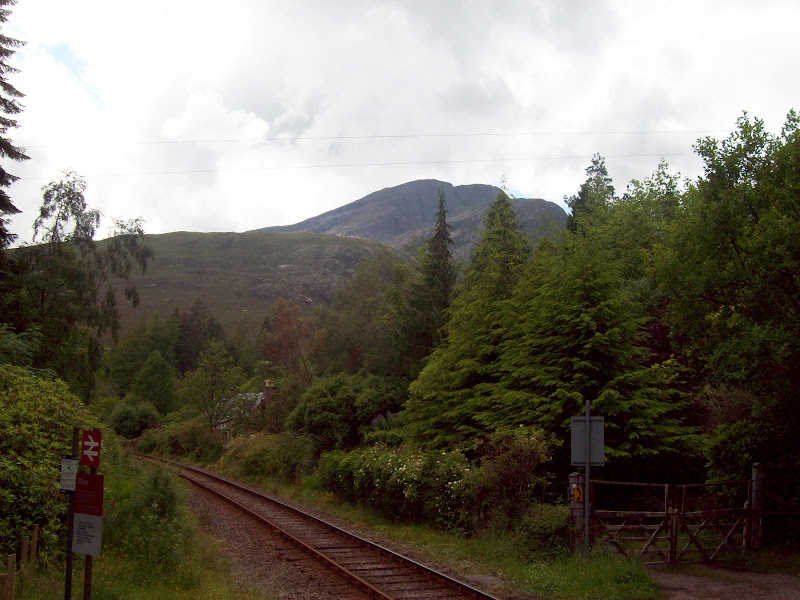 Despite the clag, this was an enjoyable day out. This is one of my favourite local areas to walk in, and using the train made things much more pleasant for the most part (apart from the sprint back to the station!)

Nice walk malky. Impressive butresses, cliffs and crags even with the low cloud.

Glad you caught that train.

A good walk there malky - and some rather menacing looking photos

Excellent report Malky - think I'd take a little longer than you, but am now determined to return - think Fuar Tholl looks amazing. I'm sure I saw a pic in Ken Wilson's (?) book Hard Rock of a climber dangling in space on (or off) Fuar Tholl years ago - I've always wanted to see that rock wall in reality - from a safe vantage point though