A few free hours on a Wednesday afternoon so I decided to head the short distance through Abernethy and Newburgh and into Fife with my destination being the three Sub2K Marilyns of Cairnie Hill, Mount Hill and Norman's Law.

In the end I gave the latter hill a miss - it started to come down in rods as I was driving towards Luthrie and my wife also called and said she had a few errands she'd like me to do on my way home, so I baled.

Anyway, it was a nice wee walk-drive combination on what turned out to be a very pleasant summer afternoon.

First up - Cairnie Hill, rising to the east of Lindores Loch. I parked by the boathouse and pier towards the southern end of the loch on the B937 and walked a short distance back north before heading onto the track past some cottages just before reaching the estate gatehouse. Then it was a straightforward circuit looping around behind the hill before climbing up grassy slopes and then through heather and mixed woodland to the very undistinguished summit. From there I continued south a short distance before descending by the side of some plantations onto a track which led me back to the road, leaving a brisk yomp on tarmac back to the car. Start of the track by the estate gatehouse View to the next objective - Mount Hill View of the Lomonds from the summit. The rock appears to be the highest point. Summit from the south Start of descent alongside plantations Track back to the road Arty shot back at the lochside

Then it was back into the car for the drive south on the B937 to Colessie, left onto the A91 to the roundabout, left again onto the A92 heading north and then onto the minor roads at Fernie to park up near the Mount farm. I actually parked a wee bit beyond the farm, in fact beyond the cottages further along the minor road, adding a good 10-15 minutes onto the walk.

Again, were it not for the monument atop this hill, it would be an extremely insignificant summit with trees doing a reasonable job of obscuring the views. Sat on the trig point next to the monument and quickly ate some lunch before descending by retracing my steps. Mount Hill from the parking spot Mount Hill across the fields Start of the farm track Last few metres to the top Flat on my back at the summit! 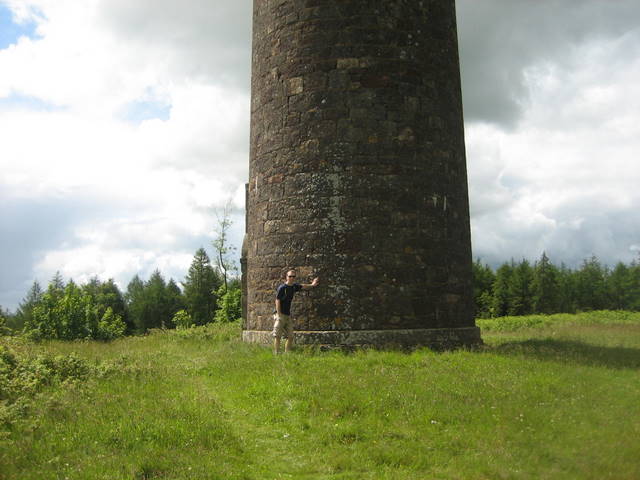 Self timed - there ain't nobody else up here! Perched on the trig Last glance back on the way home

Truly lovely report. Don't this part of the country very well but it did indeed look pastoral!! Are you they are photos you posted and some of Turner's finest!!!

aye, there's a chance (albeit very slim) that I may catch up with you some day on the munros but none whatsoever when it comes to corbetts, grahams and sub 2000s

You are in my backyard but I haven't walked either of these!!! Why is it we never see things close to ourselves !
Especially as the walk and the pics were great. Thanks for bringing these to my attention.