our_route.gpx Open full screen  NB: Walkhighlands is not responsible for the accuracy of gpx files in users posts
Arranging a walk can be a complex process involving long phone conversations, books and maps, with decisions postponed till the meeting point on the morning of the walk. This time I made a bold plan and made a pre-emptive strike. "T, you got a bike?" "Err, yeah" came T's hesitant reply. "OK - we'll cycle The Gaick northwards to An Dun. Seem OK to you?"
So at a reasonable hour we started cycling the Gaick Pass. The track is in good repair and even though we couldn't let-up pedaling, the kilometers passed easily.

The views started to open up above the Edendon Water, but after the bridge the glen closed in and we entered a quiet, lost world. 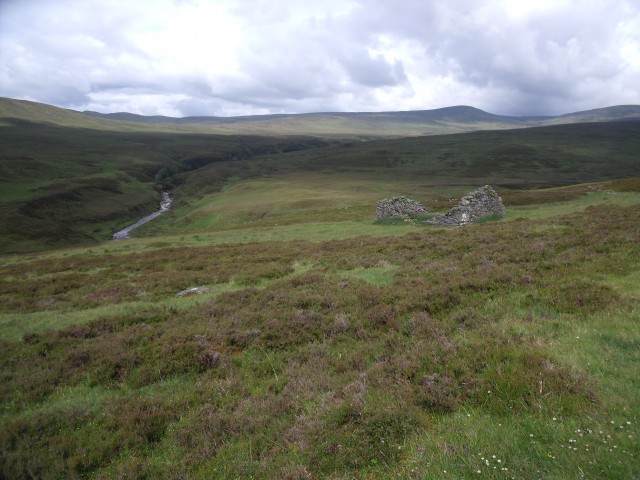 open view after the forest 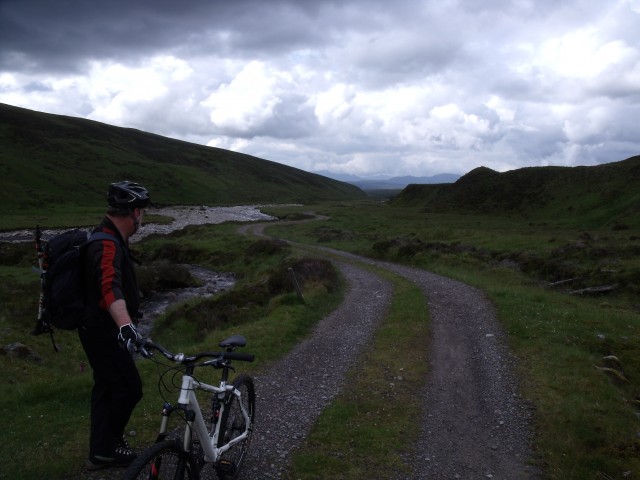 We locked the bikes at Sronphadruig Lodge and chose our route up the steep heathery slope. All the guide books suggest ascending from the west , but we thought a direct ascent of the south ridge looked possible. We picked out a route over heather burns and grassy leads but at the top loomed an ominous looking triangle of greenery. From our standpoint it looked like an almost vertical obstacle - the crux of the ascent. Had this been the Eiger, this intimidating area contrasting colour would have been The White Spider. This was Scotland - we christened it The Green Cleg. 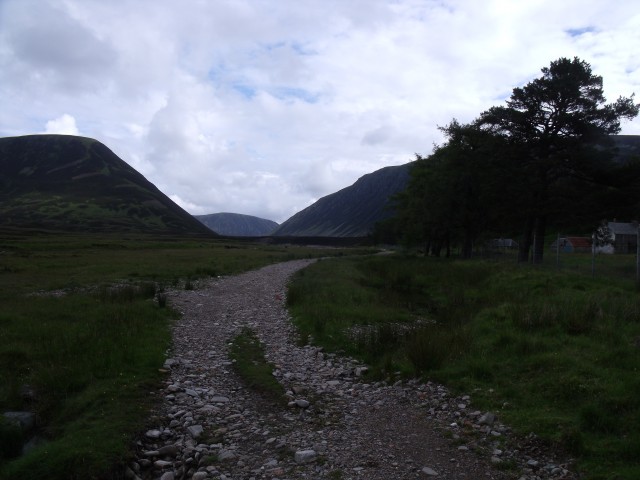 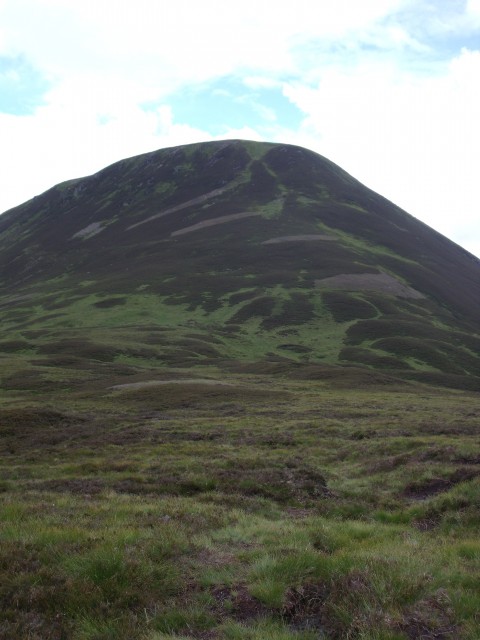 The Green Cleg at the top of the hill

Up we went on our chosen route. The gradient hit us immediately. this was compounded by our route through brittle burnt heather stalks. There was very little to hold on to and the slope was invisible below us. One slip and we would have been bouncing into the loch below. We altered our route back into the heather and we were quickly united with a path of sorts. This became clearer the higher we climbed. We were still scrambling up on all fours and not a nice piece of solid rock to grab hold of. At last we reached the Green Cleg. Far from being the vertical horror we had expected from down below, it turned out to be a boggy cleft in the hillside, and not nearly as steep as the slope we had just been on. 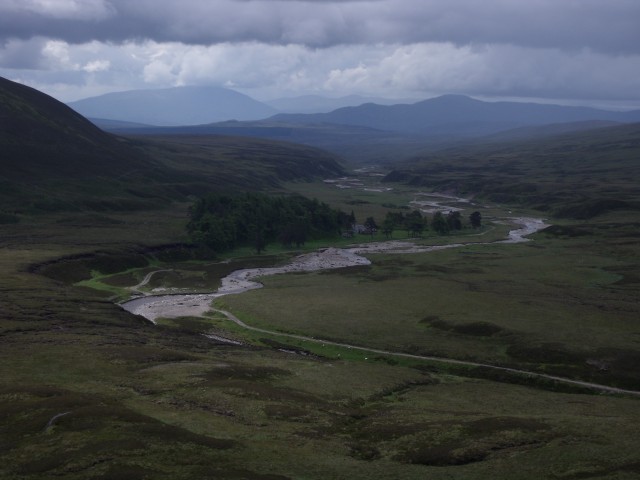 The summit was an open desolate place but the views were rewarding. after a quick lunch we went west. The advantage to this was that we could see the hillside all the way down. We followed sheep tracks round the side of the hill and eventually got to the dam. We decided to take the bulldozed track and cross the river at the ford. The water was too deep and fast in places at the ford so we found a suitable crossing point further upstream, and after throwing some big stones into the river, completed the river crossing with dry feet. 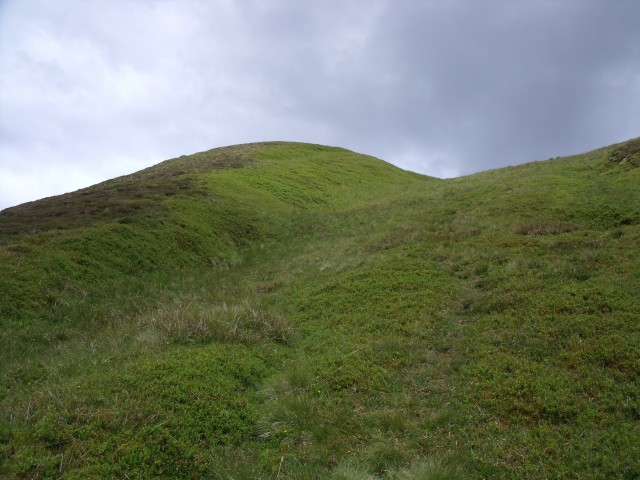 Cleg - not as scary as we first thought 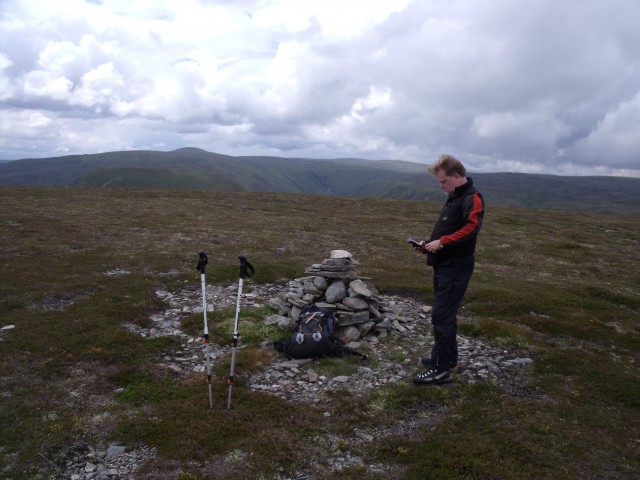 Now, everything was going well, but T likes snooping round derelict buildings. We inspected the lodge and found it to be in a bad state. T could have been there all day, but I was showing signs of boredom and set off along the track. We were now following the river downstream and flying along, cycling in top gear. Oh what fun we were having! 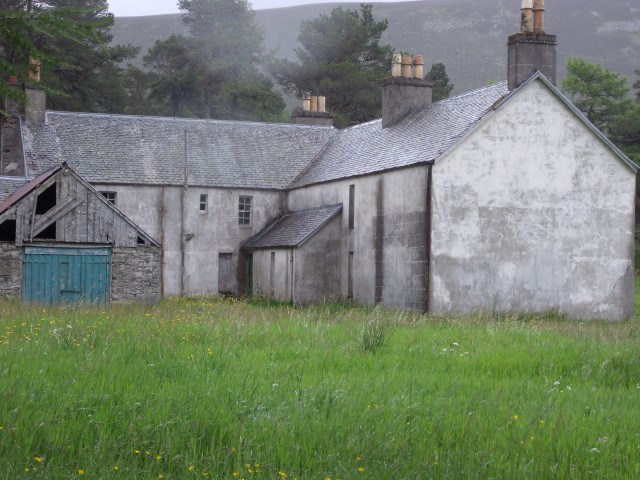 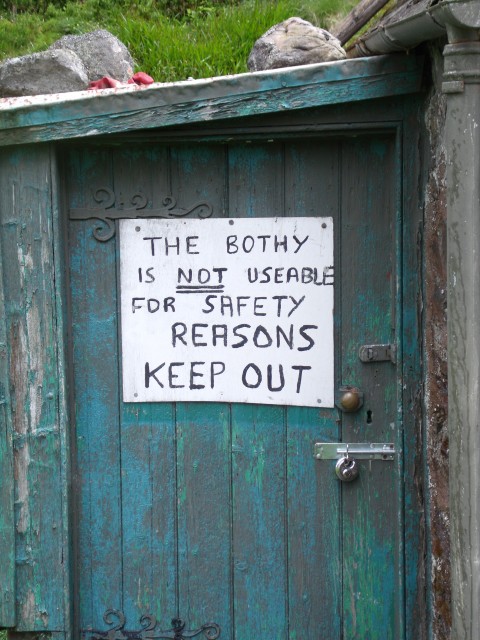 4k from the cars, the heavens opened. At points the rain was so hard that we couldn't even see the track. We were absolutely soaked and cycling along a river rather than a track. If we hadn't spent so much time faffing around at the lodge, we could have been dry.
Apart from the soaking, using a bike to get into the hills is fun. I'm going to look out more routes and do this again.

The rain on Saturday was also grim. The rivers were dangerous and crossing two was a real pain rather than a welcome obstacle. It's amazing how quickly they can change. I've only biked and walked once but I love the combo. Great warm up and warm down.

The "warm down" felt like cheating - but only for a short while. Couldn't get the grins off our faces, even in the pouring rain.