I had hoped this report would have been a celebration of my completion of the Mamores, but the forecast for that part of the world on Sunday didn't look too good. I've had two great days on the Mamores, with great weather and want to make sure I have the same for the final leg of that journey. So, I've pencilled them in for sometime in 2015

So back to Beinn a 'Ghlo.

When I arrived at the parking area near Monzie I wasn't too hopeful. It was cloudy and although it wasn't raining there was a distinct feeling of mosture in the air. Walking along the track and got a nice vew back to Loch Moraig. 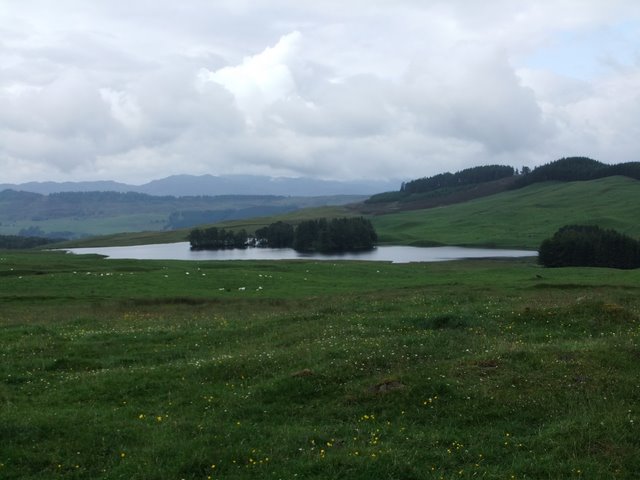 Arriving at the site of the former shelter - it was definitely no more. The view of the first hill of the day (Carn Liath) suggested a day of clag 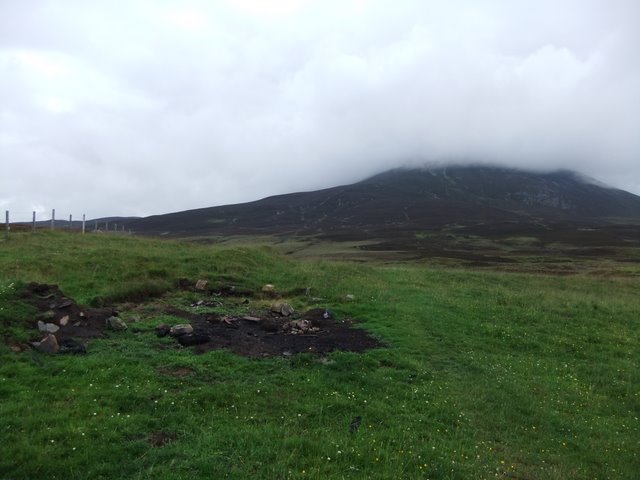 Carn Liath - so they tell me

The initial path was quite boggy in places. Well, I say quite boggy. It was rubbish in fact. And making me feel a bit grumpy too. Things improved though as height was gained, and so did my mood, even if the cloud was staying low. Got a nice view down the path just as I was heading into the clouds 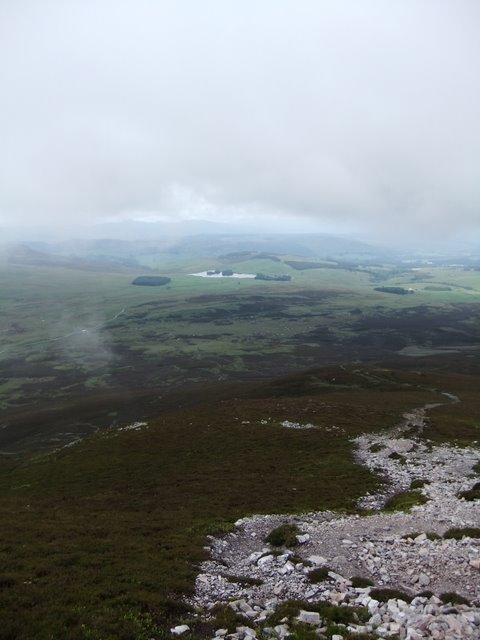 It's a well eroded path up Carn Liath. Nice, easy going and I was making good progress. It was about the time I stopped to take the previous picture when I disturbed a couple of flapping, screaching creatures. Scarred the @!@! out of me

Once I was in the cloud there wasn't much to report. Was this going to it for the rest of the route 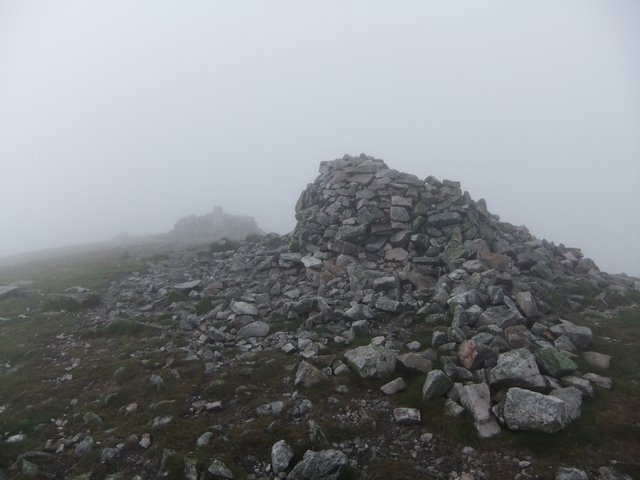 Didn't hang around once I had taken in the extensive views

and was soon heading down off the (apparently, I couldn't tell

) snaking ridge toward Beinn Mhaol and the next target, Braigh Coire Chruinn bhalgain (BCCB from now on!). 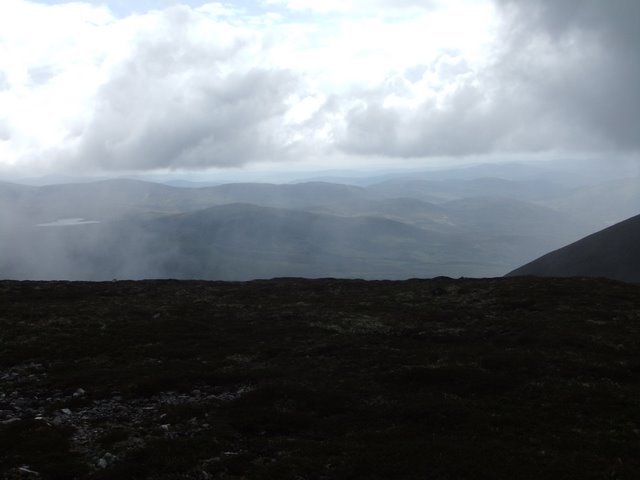 Some views at last

I had thought of running back up to the summit of Carn Liath, but in the time it took to have that thought the cloud returned

So, onwards I went.

As I got closer to the saddle with BCCB there seemed to be a battle going on between the cloud and the sun. I remained hopeful that the low cloud would eventually give up and clear away.

I was impressed by the view toward BCCB when it did clear sufficiently. 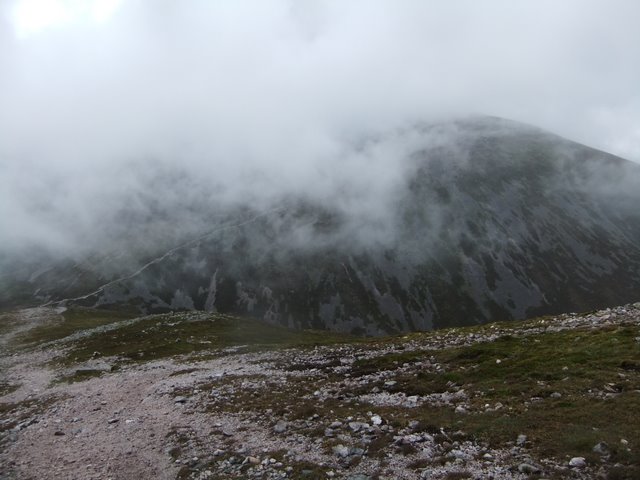 BCCB in the mist 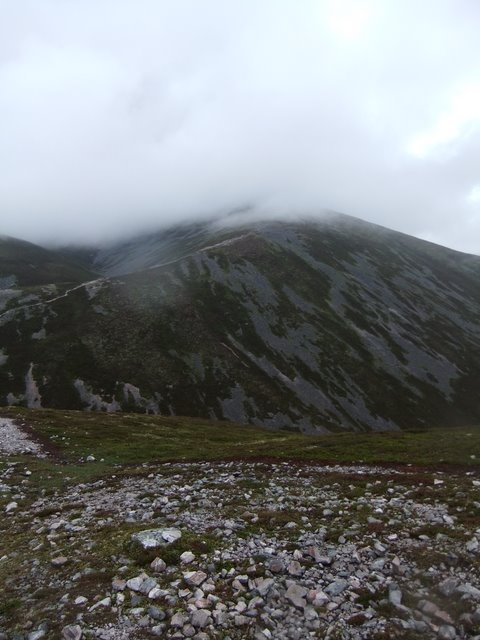 Making my way up BCCB the path remains good. Easy to follow and not difficult at all. And the weather seemed to be improving all the time 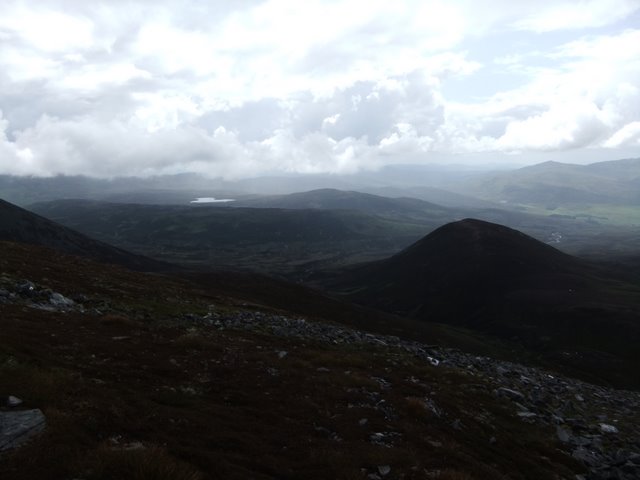 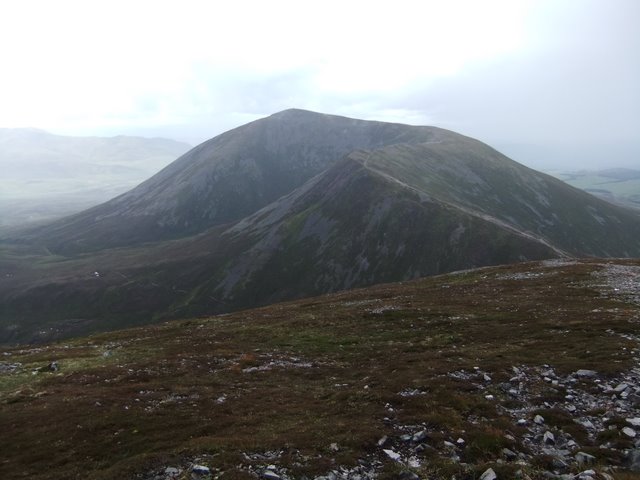 Summit number two, but it was raining and it was cold with the wind picking up. The price for getting shot of the low cloud perhaps, so probably a price worth paying. 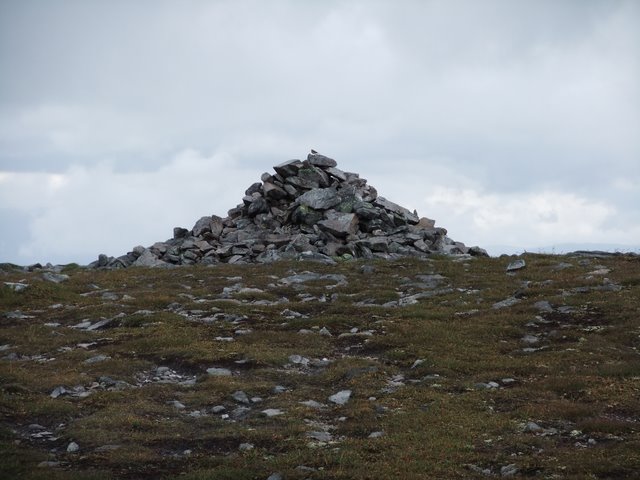 Didn't hang around long on BCCB, but the route across to the third and final summit looked decent. Carn nan Gabhar.

Perhaps the only tricky bit of this route would be locating the path down from BCCB onto the saddle with Carn nan Gabhar. Especially in mist. Once you are on it though, it's obvious and the remainder of the route up to the summit was easy walking again. 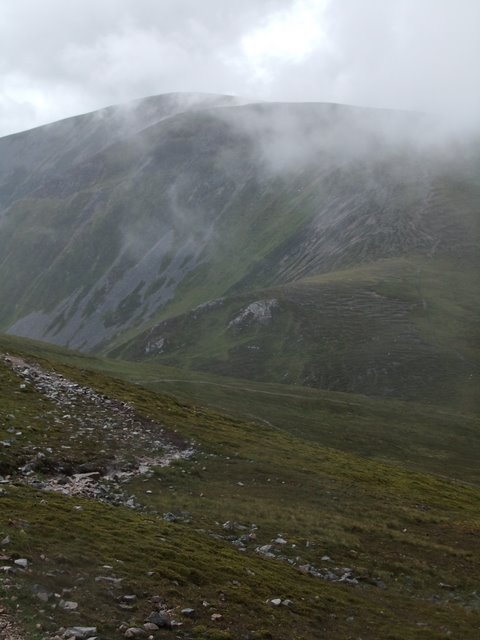 View back toward descent from BCCB

Low cloud was still sweeping in all the time, but generally things continued to improve and views were opening up all the time 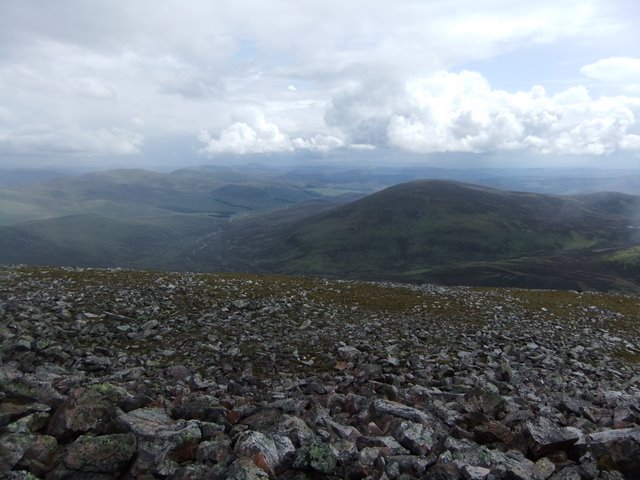 It was as I arrived on the Carn nan Gabhar summit that I saw what, for me anyway, has to be one of the strangest sights on the top of a hill. On the way down from BCCB I could see a couple of guys make there way up toward Carn nan Gabhar from the WH descent route for this walk. Unfortunately I'm blind as a bat

and need goggles in normal surroundings. For a number of reasons that I won't go into here,I don't wear them out walking though, so these two chaps had been a bit of a blur to me as we made our ways up the hill. When I eventually arrived at the summit I was shocked, surprised, amazed to discover they had taken their mountain bikes all the way to the summit and were preparing to cycle all the way back down again

I'm since told by a friend this isn't unusual, but it was a new one on me

The summit of Carn nan Gabhar is a bit stony, with a cairn (not the summit), trig point (still not the summit) and then another cairn (this one's the summit) - had to point this out to another walker who seemed to think the trig was the high point. Didn't want him to be disappointed.

It was eventually on this final summit that the persisience paid off. Ok, I still had cloud, but I could feel warmth

The sun was shining

And there were good sized patches of blue sky 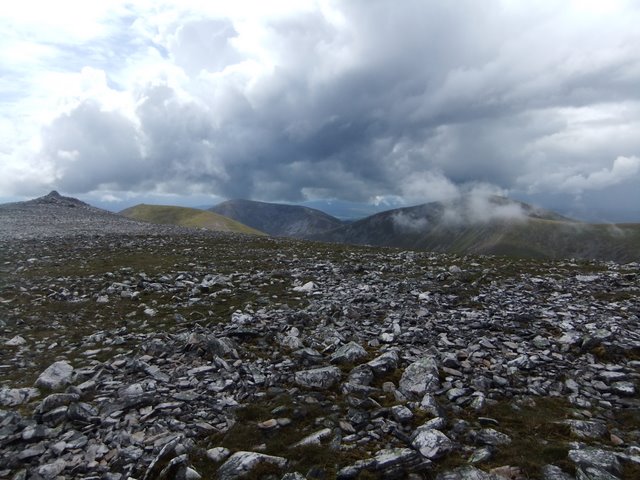 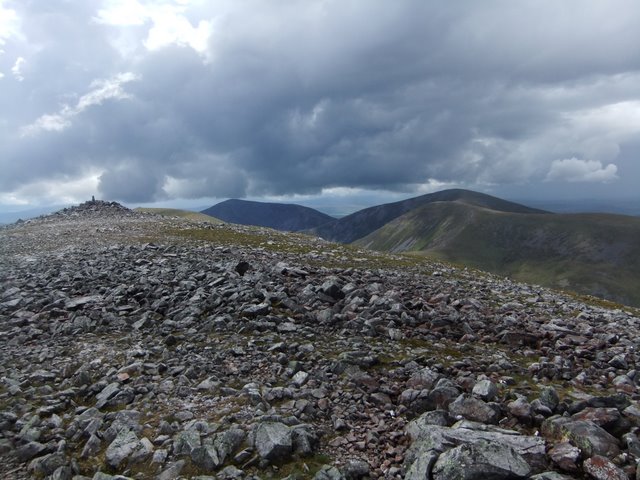 I hung around the summit for a little while, enjoying the views and peace and quiet...... well, just enjoying everything really

Eventually it was time to shift. I'd decided to take the alternative route down, via the top of Airgiod Bheinn. Easy walk up, with a nice view back toward Carn nan Gabhar 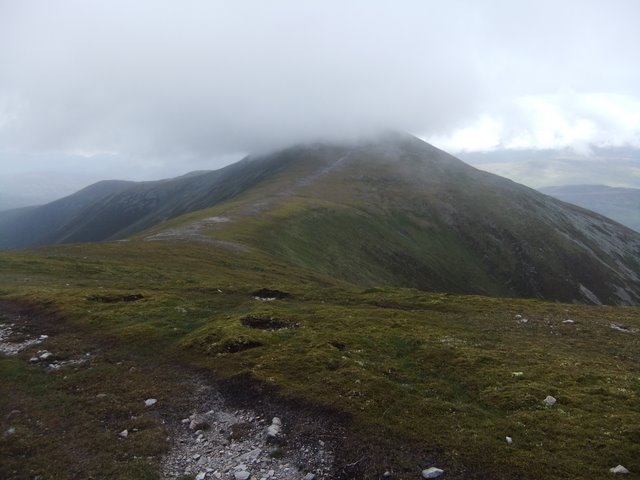 This turned out to be an entertaining end to the trip. The summit is a nice, narrow(ish) and rocky ridge, but there's a good path all along. Was getting good views all along the day's route 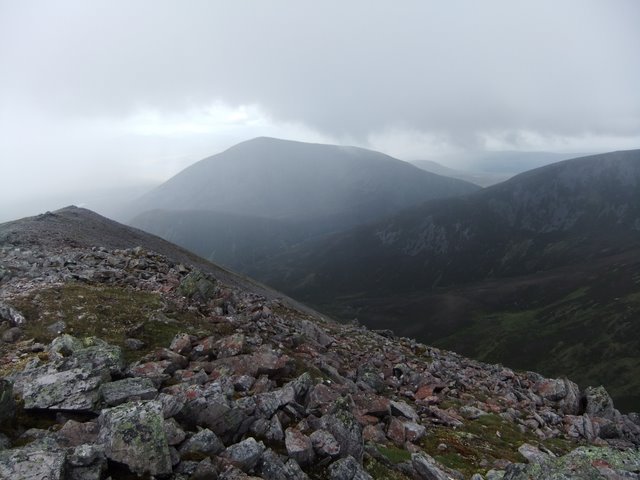 Initially the route down looks steep (and it was) and at times the path veers from excellent to apparently non-existent. This is a good bit near the top 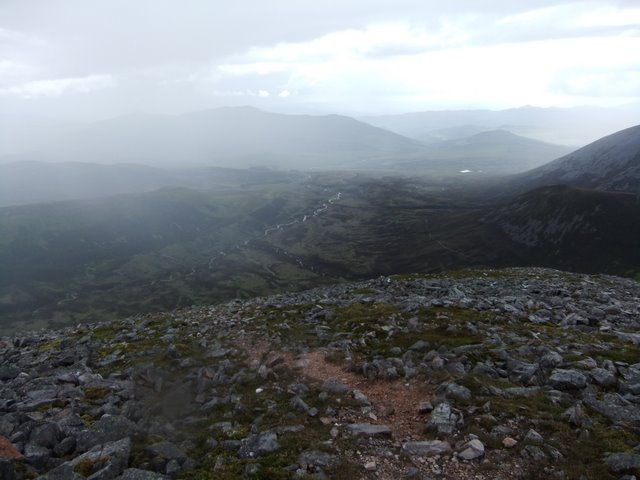 to stay on the path all the way down, and at one point I thought it became rather tasty

Nice and steep, loose slippy gravel. I was having a ball 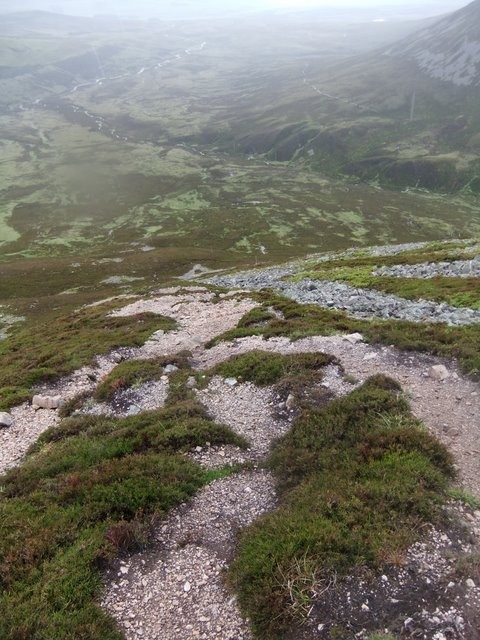 Path down off Airgiod Bheinn 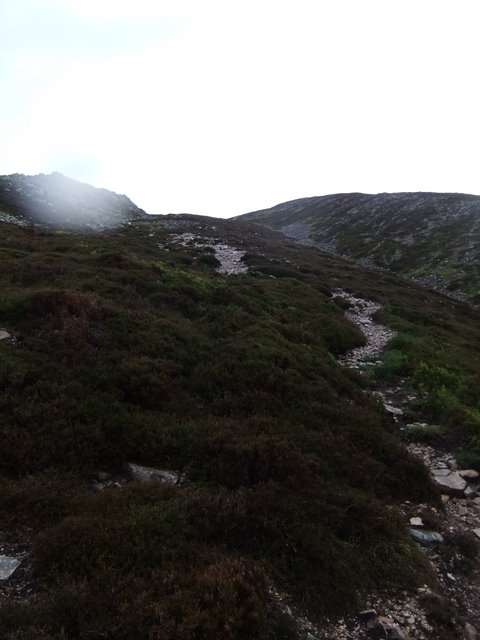 And the view back up

The good thing about steep descent paths is that you lose height quickly (slip of course and you lose it much too quickly). Soon enough I was contouring round the base of the hill and making my way onto the long route back to the car. Man, what a bog fest that route back was. Some of the worst I've known

I did get some good views back toward the hills I'd been on though, as well as the burn I had crossed to get back onto the main path 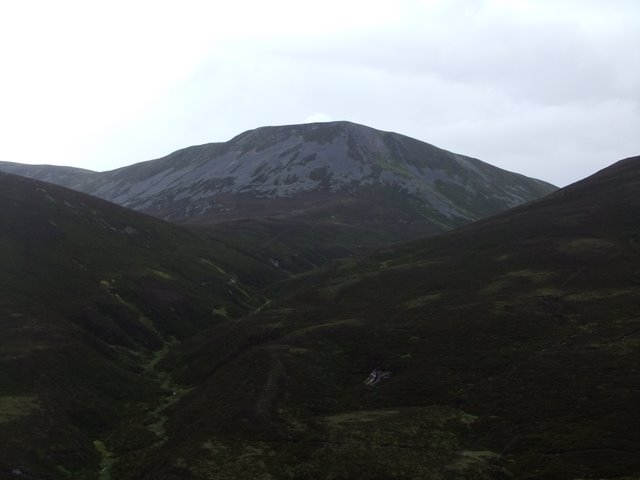 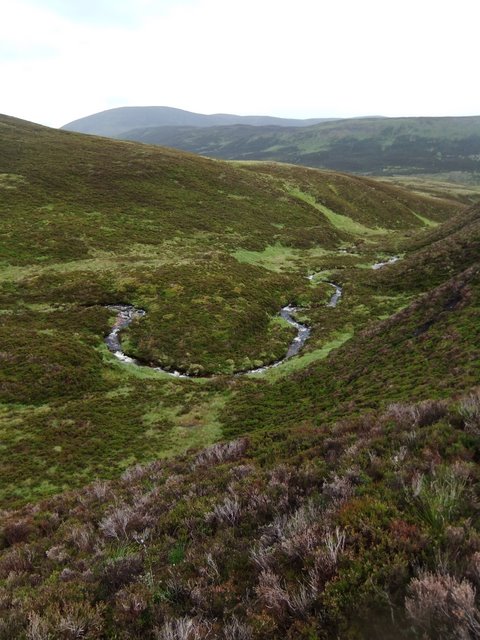 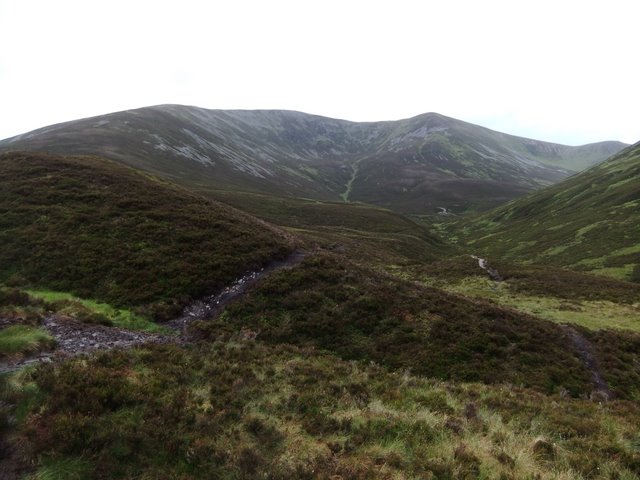 You can see from the next picture the cleft in the ridge that the path comes down. Doesn't show on the map, but it provides a lovely, steep path down. I'm glad I took this route off these hills, rather than the suggested WH route. 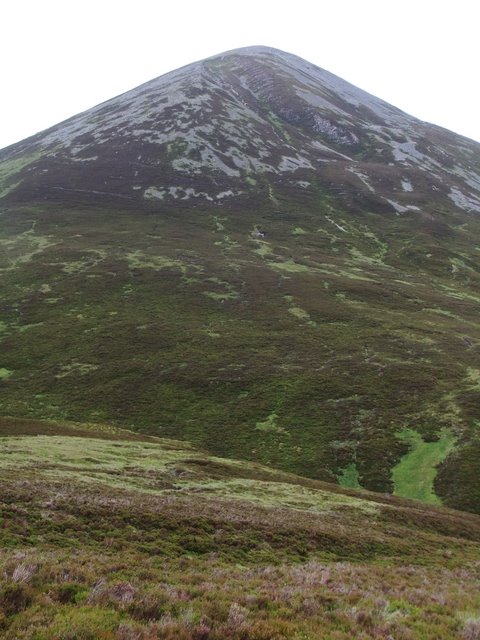 Got the chance for one good view back as I slopped back through the bog that was a poor,poor excuse for a path and onto the landraover track. 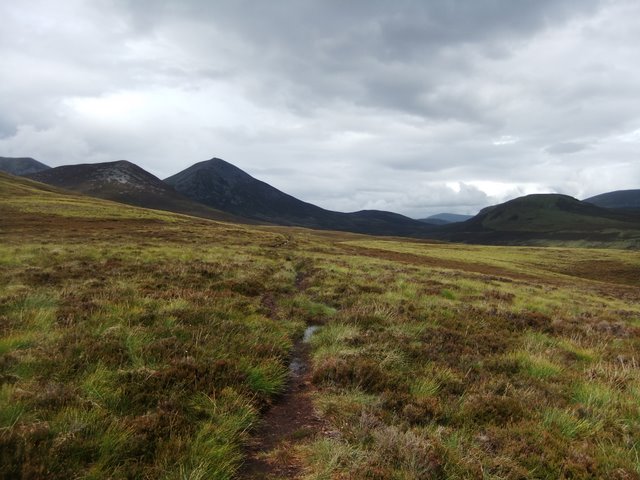 The final view back

But all good things have to come to an end and for the last 15 or 20 minutes back to the car the weather turned, and it p****d it down

Got soaked, but didn't care. I 'd had a great day on these three. Persistence had paid as I had eventually got some nice conditions on the final summit and enjoyed the steep descent of Airgiod Bheinn. I now have these three down for a good, crisp winters day

Well done on getting round all 3 munros and it is a great walk. It was also good to see the route to the bealach that takes
you up to Carn nan Gabhar as we had no sight of this when we did our attempt.

Because we missed it we ended up down on the valley floor and had the longest walk out of any walk we have done.

As you know it is extremely boggy
and took us nearly 3 hours toget back to the car. We will revisit this as your pics suggest a great view.

Thanks Jockstar. I remember your report and seem to remember mist was involved, which would make locating the path down a problem. It's probably the only section of the walk where there isn't a clear route to follow, but until you drop down a way you won't know in mist whether you have dropped down at the right point or not. And as you found out, it can be a bit too late by then

And yes, that route back is boggy

The worst I have ever come across so far. And long too

I hope when you get back up to these hills you have a good day, as the views would be excellent on a really clear day

The initial path is certainly boggy - I like the sound of your return route which seems much better than the normal rather wet route.

Another fantastic,well-detailed report Pete.
Don't you think its ironic and more than just a wee bit annoying that when you looked back to where you had just been , the mist cleared!!!!

Well done and I'm glad that your persistance did pay off