Back in April my son and I walked a really cool circuit from Glenridding, over Birkhouse Moor, Striding Edge, Helvellyn, Helvellyn Lower Man, Swirral Edge, Catseyecam and back to Glenridding. It looks like quite a similar walk to the one Sue reported on in an earlier post - and at almost the same time. In our case though the weather was very kind - it was a glorious spring day.

I have to say that I didn't find the walk-in and first climb particularly inspiring - a dull trudge up grassy Birkhouse Moor (although some compensation was to be had in the views back to Glenridding & Ullswater) and in the company of a fair few people (see my earlier posts for more on this). In fact there were moments when I questioned why I do this, and surely sitting by the lake admiring the fells from afar would seem a preferable option.

All this was about to change. As we rounded the high-point of Birkhouse Moor the rest of the day's journey opened up in front of us - and what an inspiring sight. Directly ahead the imposing mass of Helvellyn, still with patches of snow, and either side the jagged teeth of Striding and Swirral Edges. Like we were entering some massive jaw. At that moment the fatigue of the Birkhouse Moor climb lifted completely, and from then this was a thoroughly enjoyable experience and a momorable day out. I loved every moment - and even the crowds dispersed! 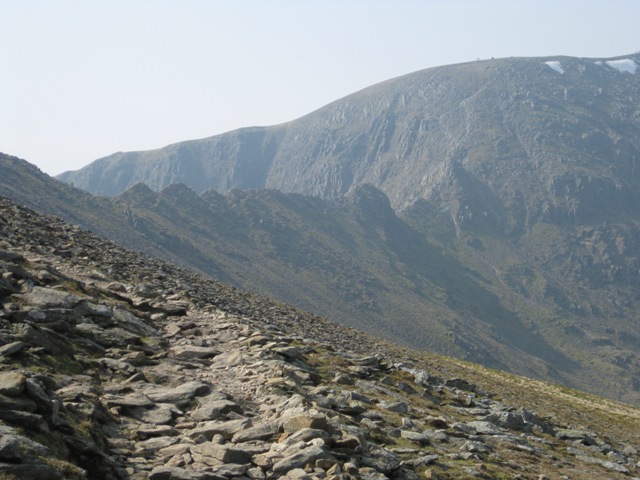 Striding Edge was a hoot. I'm not all that great with heights (considering I love the hills so much), but on this occasion I was confident enough to go right over the top and found the steep drops either side exciting rather than terrifying. No doubt on another day I would opt for the safer route! This was just one of those magical days when everything worked out.

The trickiest section was at the end of Striding Edge - I think they call it the "bad step". This involved a down climb and a bit of a stretch to find footholds. There was a bit of a traffic jam here as people waited in-line to take their turn. The spirit was pretty good though, and people were always willing to help those behind who struggled with the down climb. See - I enjoyed the company of others on the hill - must have been one of those days.

From there Helvellyn towered above us and the ascent ahead looked like quite a challenge. After an all too short and enjoyable scramble we were on the summit plateau. What a fantastic place - all of a sudden you could tell we were up high. And the wind was something else - standing upright was quite a struggle. After pausing at the summit trig point, and behind one of the shelters for a short break and a snack, we walked the half mile or so along the ridge to Helvellyn Lower Man. The views from here back to Helvellyn and onto Catseyecam were well worth the detour. Returning along the ridge we turned left down to Swirral Edge. The climb down was a little steep but felt like a lesser challenge than Striding Edge. In no time we were on the ridge heading towards Catseyecam. The ascent of Catseyecam from this side is pretty gentle with grand views all around, especially back to Helvellyn and Swirral Edge - which from this viewpoint looked much more imposing than it felt like when we were on it. We liked Catseyecam. A proper pointy mountain with a small summit - and in fact one of the very biggest in Lakeland at just short of 3,000ft - it's just that it is so dwarfed by Helvellyn. We continued over Catseyecam and descended to join the path into Glenridding. As we walked downhill it struck me that an ascent from this side would be quite a serious undertaking - cementing my respect for this excellent mountain.

What an excellent day out. One of my favourite mountain walks.

pic4186 wrote:What an excellent day out. One of my favourite mountain walks.

Cracking report and some very good pictures - I particularly like the ones of Striding edge looking up to the summit.

I enjoyed reading your report,I did virtually the same route about a month ago and have very similar pictures. Had a bit of low cloud on striding edge which cleared by the time I got to the summit of Helvellyn to give some spectacular views Nice photos - I especially like the one of Ullswater. How did you manage to get Striding Edge with no people in it?!!

I set off from Glen Ridding at 5am to miss the crowds, had a nice peaceful coffee on Helvellyn without seeing anyone up at the summit, now that was peaceful