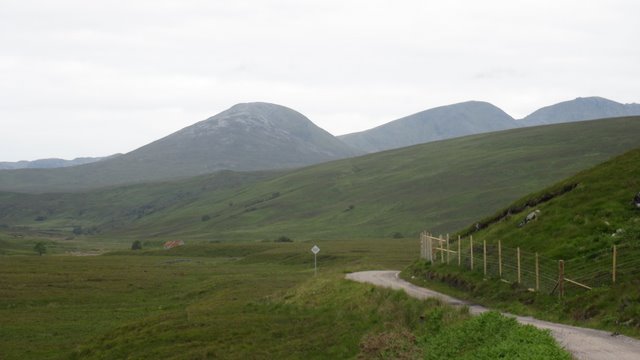 Approaching on the road up Glen Cassley

We started the trek from Duchally Lodge, 17km up Glen Cassley from Rosehall on the A837, having received permission to park by the lodge. The Duchally Lodge sounds grand, but actually looks like an extended 1960s bungalow. However as we were later to discover, it is more 'lodge-like' in the inside!

The resident deer of the lodge who was very tame, introduced himself – apparently he was orphaned several years ago and had relied on food from the stalker, and is now a permanent resident. 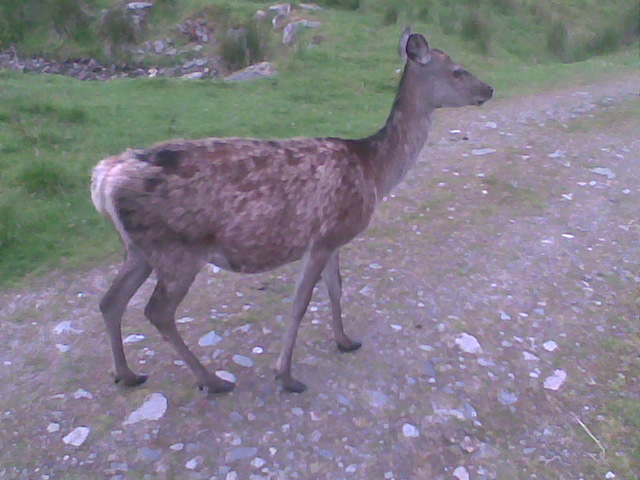 The resident deer of Duchally Lodge

We then set off up the track in 4x4s – we had already obtained permission from the stalker to do this. The track initially followed the River Cassley; then went alongside an ugly aqueduct, and then into more open landscape. The drive was exhilarating in itself – especially during the negotiation of a narrow and steep metal bridge!

We eventually reached the top of the track, where the actual walk began. It looked as if we were half way up the hill already, but looks can be deceptive...

Rather than 'attacking' the hill directly, we traversed along the path towards Loch Bealach a Mhadaidh, taking in views of small lochans to the north and east.

On reaching a bend in the path and a small cairn, we started the gradual southerly ascent of the ridge towards Ben More Assynt. We soon started recognising the hills behind us to the northeast, including Ben Klibreck and Ben Hope. 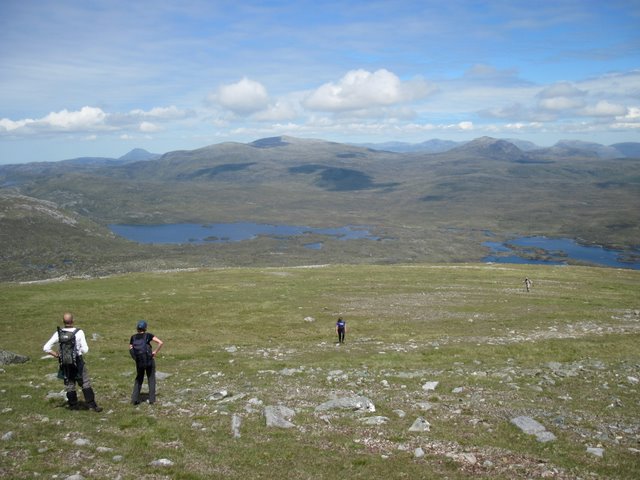 The views down Glen Cassley and Loch Shin were also extensive. 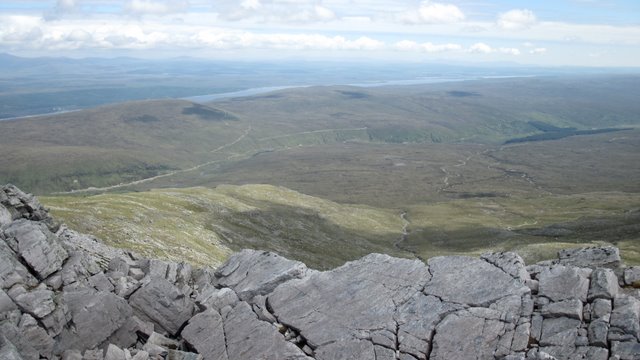 The ground became increasingly rocky the higher up we went, which slowed our progress, but eventually we reached the summit of Ben More Assynt. 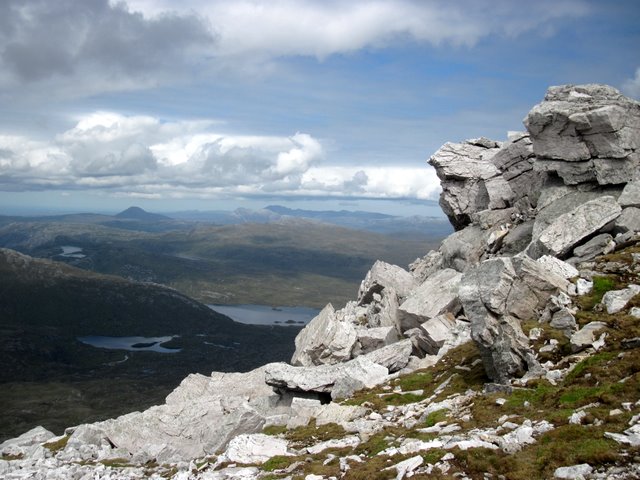 From near summit of Ben More Assynt

We had lunch just below the summit of the Ben, before heading along the rocky ridge towards Conival, passing Dubh Loch Mor, a dark loch in the corrie to the south. 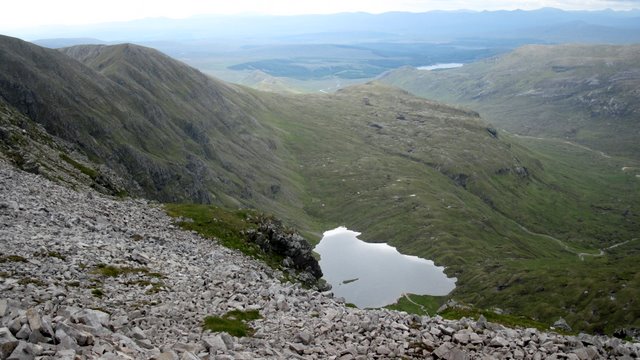 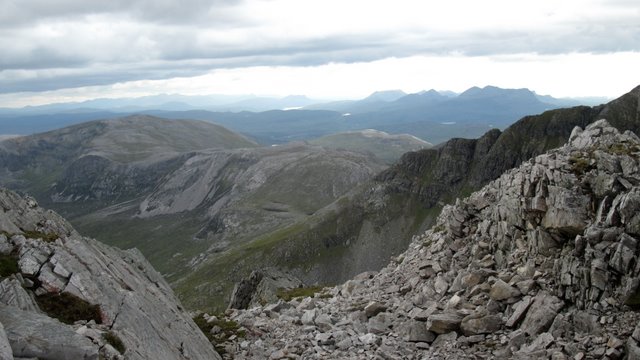 The glen containing the River Oykel to the south was particularly picturesque. 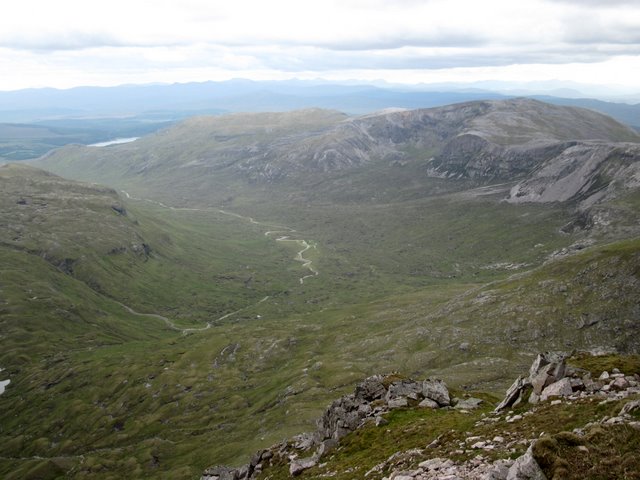 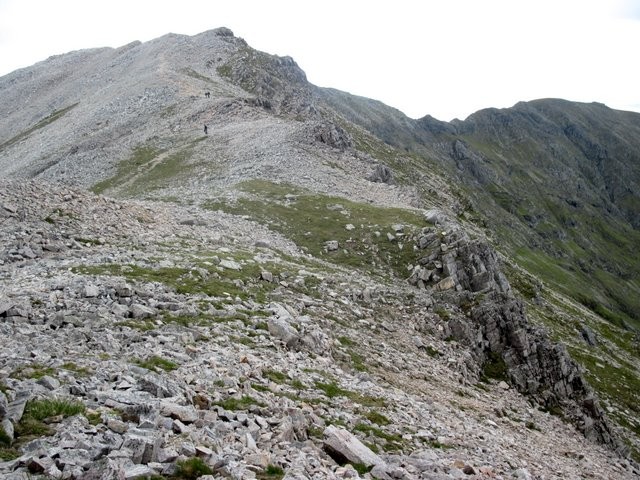 Nearing the summit of Conival, we saw a series of lochs, each feeding into the next. 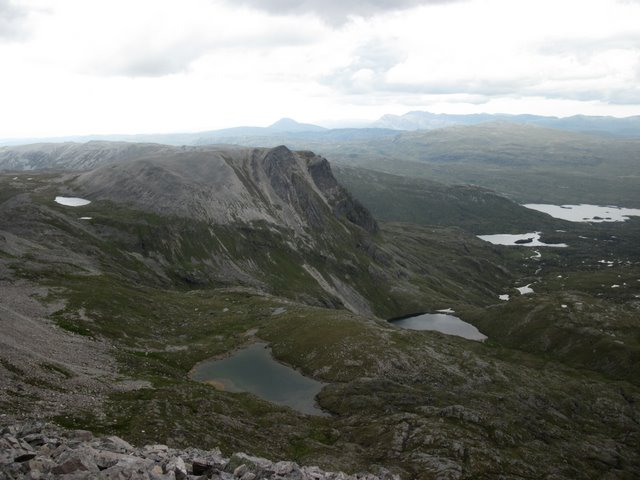 One final pull up the slope brought us to the summit, from which there were grand views....
...across to Ben Mor Coigach, Stac Pollaidh, Cul Mor and Canisp to the southwest and west... 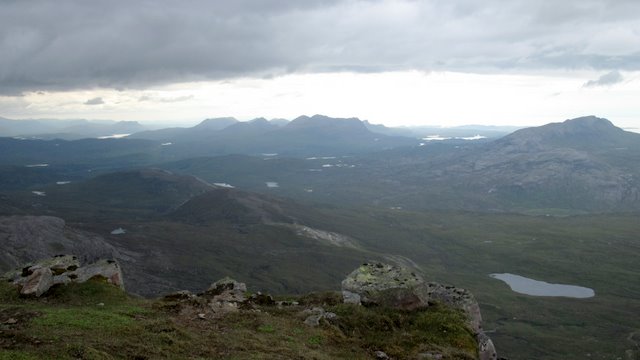 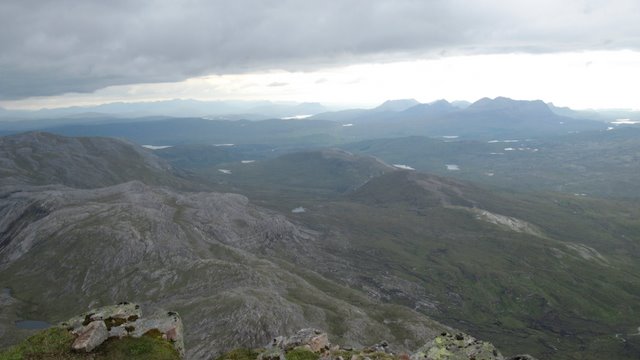 ...across to Loch Assynt and Quinag to the northwest... 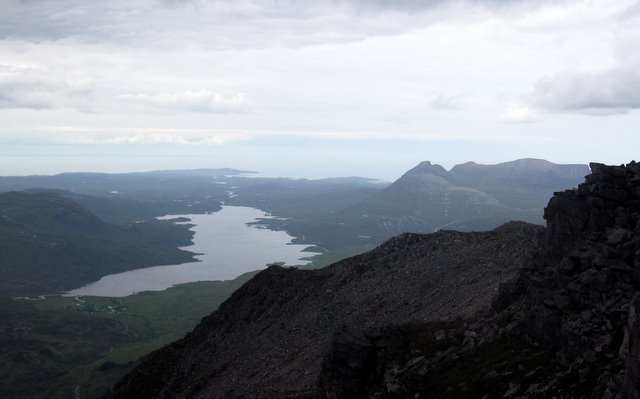 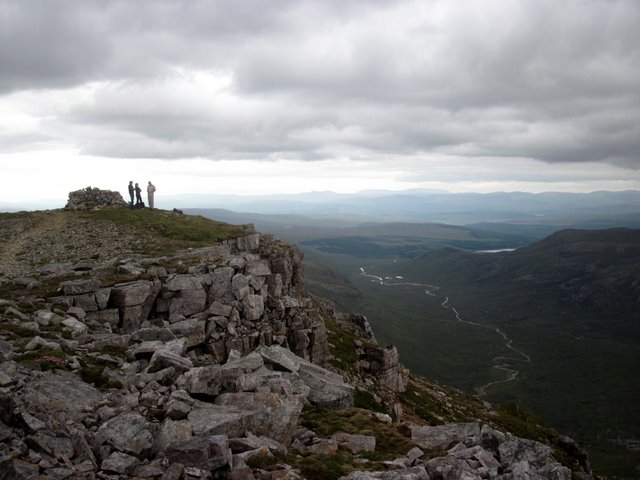 At the summit of Conival

After a debate about our return route, we decided to retrace our steps to the summit of Ben More Assynt and then head down the eastern corrie from there.
The later parts of the ridge were 'airy' (and therefore hairy!) and there were several awkward steps to be negotiated. We were glad that the rain was only light, as the quartzite rock would have otherwise been very slippery. 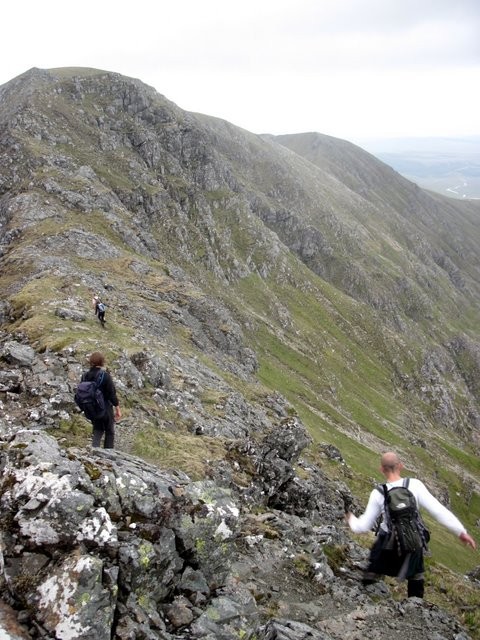 The airy ridge down 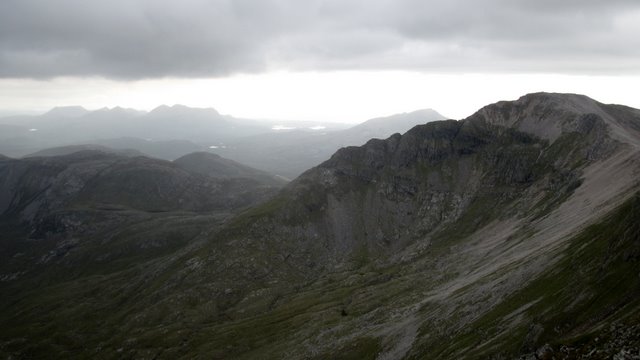 At the bottom of the ridge, the walk back to the 4x4s was relatively easy although boggy in places... and I found my first antler in one of the bogs - only a 2-pointer, but now taking pride of place on my windowsill!
After a bumpy ride back to the lodge, we were kindly invited in to the lodge by the stalker and his wife who generously provided us with drinks and shortbread - a proper highland welcome!

ben-more-assynt-and-conival.gpx Open full screen  NB: Walkhighlands is not responsible for the accuracy of gpx files in users posts

A cracker of a route for these two fine hills.Both times I've walked them have been loops, once back down Allt a' Bhealaich a 'canyoning' type of route