We got the idea to do this walk having gone up Meall Fuar-mhonaidh at the other end of Loch Ness and we could see these hills from there and thought that would be another great viewpoint. So we thought this fitted to a T.
Managed to follow the instructions as to where to park the car. It is an old right of way so the start of the walk is beside the sign pointing it out and the path follows it to start with. 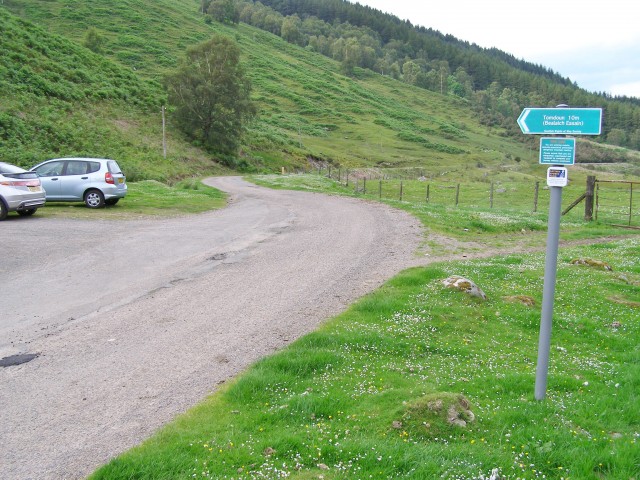 The space for parking looks like a car park, but it is also used by lorries to turn round so it helps if you keep the tarmac clear and park either side of it. On with the boots, time to rock.
The walk does diagonally up the side of the banking following the old right of way and climbs up steeply all the way. It can get a bit confusing in all the bracken, just keep going up the path becomes more obvious higher up. The right of way and the high point

As described in WH, you want to branch off it before it goes too far beyond the high point otherwise you will need to walk back over to the path. Regardless, its a steep climb. Laggan Locks from path up to high point

At the top, the path continues along the edge of a steep sided gorge and a good view of Ben Tee and surrounding mountains to be had.

View from path to style, Ben Tee (right) and gorge

Its guite boggy here but after the style it improves. We sit at style for a drink and watch a tall ship go up the loch. We followed the path as it left the gorge going beside a small burn. It eventually disappeared a third of the way over the flat plateau to the hill proper. It was boggy in the middle with surface water so we walked around. We aimed for the edge of the corrie with view to walking up that way to east ridge. We left the gorge early and so the walk across was a long one. In hind sight, keeping to the gorge longer and cutting across later might have been better. We decide to return like that if possible. Once on the slope proper it is dry under foot at least. I have light boots but I've still kept my feet dry.
Now the walk up the side of the corrie is a case of zig zagging up the best walking. We stopped at first crag for a break and to admire the view. Getting up to the east ridge, view of Loch Ness beyond. Our view when we stopped for a break, over the plateau back to to the gorge

Several more steps up to the top. At the next crag we pick up a path. From the footprints, deer use this more than people but its good going and a decent line up so we follow. Spot the odd boot print now as well. View up to (nearly) top after our break

As usual, the top you see is at least two short of real top. But the way is stony and short grass and the path is clear. Stop for another break and a look at the view on the other side, Loch Garry etc before the final two crags to top with the cairn. The view over the other side. Up Glen Garry

Relief at making it, taken us a long time to get here. 4 hours in total. Looking all the way back to Loch Lochy from the top The hill that gave us the idea, on left Meall Fuar-mhonaidh over Loch Ness

We have our lunch in some shelter after having a look round and taking photos. Have a T but its a Tunnocks not a Tennants.
Its getting very dark now and we can see bad weather coming over so we don't wait too long before setting off back down.
We follow the path as far as possible as its easier walking, but it takes us a wee bit beyond the edge of corrie. however, we can see a stony ridge coming over from the gorge that shortens the walk across boggy plateau and so aim to walk over towards it.

From lower slope of Ben Tee right, the munro Sron a Choire Ghairbh and associated hills

No path for this section, but the going is fairy good. I've never seen so much bog myrtle before and I do like the smell plus its used to make beer (not T tho'). Once we get to the ridge we pick up a good deer track that takes us to the gorge side and eventually pick up the path back to the style. The path coming back towards the gorge The style where the gorge turns south to Loch Lochy

Back onto the boggy path to the high point.
From here it looks even steeper than when coming up. From the high point, view back down to farm, bridge and car park

We walked round to get the shortest drop to the right of way path, i.e. the way we came up. Just a case of watching the knees as we go down the steep bits.
Grateful to be back at the car, a long day, but a great walk. It really is T time now and it will be a beer.