My walking buddy is recovering from a badly broken ankle (which involved being air lifted from remote spot in Cairngorms - that's another story) and felt 18k climbing Sgurr Thuilm (which we did recently) was a bit far at this stage in its recovery. So why we agreed to climb Beinn Chabhair yesterday I'm not quite sure... We had this idea of a nice little hill down Crianlarich way and got a bigger hill day than we expected!

We parked at the Drover's Inn which obligingly allowed us to use its facilities which meant passing various stuffed creatures in the darkened foyer. The place has quite a medieval feel about it. We walked obediently round the camp site, intrigued to see bare-legged campers wearing midge helmets - maybe it's just their faces they don't like having bitten. We also noted the presence of the bar on the site which later featured urgently in our thinking as we slithered back down that horrible path. It wasn't much fun going up but coming down with an injured ankle was an uncomfortable experience with high bracken on either side allowing no alternative route.

The Beinglas Falls offered a welcome respite from heaving ourselves up loose gravel in the hot sun. There are two stiles to cross. This is the second one with the path going on up the hill behind. We were relieved to get out of the steep bracken section on to the open moor. Handy little cairn to remind us this is the path to take on our way back. Looking back along the path we followed up the north side of Ben Glas Burn - a delightful rippling burn with pools which looked inviting on such a warm day. Most of the water in Moira's platypus had leaked and we couldn't risk her running out on a day like this so were glad the water in the burn looked clean. She drank it all and has so far come to no ill effects! This fresh green patch beside the burn was full of wild flowers including purple orchids. This flat section wasn't as boggy as it might have been thanks to a couple of dry sunny days but we still had to do some circumnavigating of thick black mud sections. As we climbed up on to the ridge a hind and calf had a close look at us before loping off. The ridge is attractive with its twisting path and tiny lochans. Not being sure how much further it was to the summit and whether it was wise to continue Moira suggested I go on ahead. The ridge leading to the top. View of Ben Lomond from the top. Seeing me reach the top from further along the ridge M decided she'd come too far not to bag this one. That's a bit of the A82 down there and presume that pointed peak is Ben Lui. Contemplating hills in every direction. Meall nan Tarmachan's knobbly lumps and bumps. It's very different terrain from what we have up here. 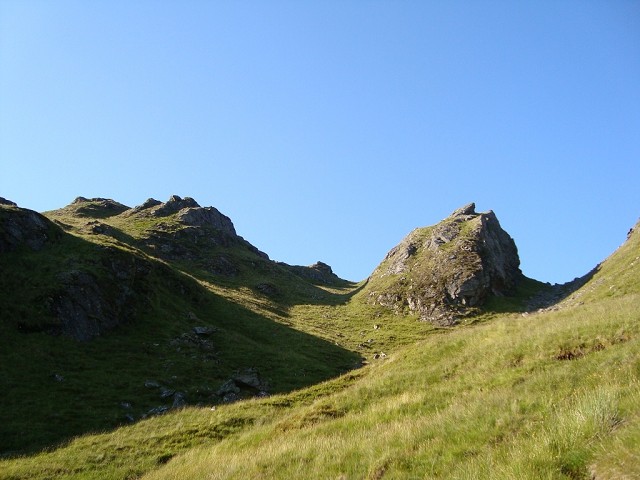 It felt a long way back. I got a couple of cleg bites going down the path to the camp site so had to put my fleece on even though it was still very warm. We certainly appreciated the J2Os with ice we had in the camp site bar before the long drive back up the road to Inverness. It was a more challenging day than we expected - but a wonderful hill and fabulous weather.

Nice report. Good pictures too. Thanks for the detail on what seems to be one of the ones just to tick off.

Excellent report and some great pictures. Have just posted my report on the same hill from a couple of weekends ago. Seems you had by far the better weather for this one, although I couldn't grumble when I was up there

It's a good little walk isn't it

Just read yours Pete and agree about that waist high bracken - got mixed up in it around the falls on the way down. Other thing I noticed was how much more water was in waterfall when you were there. No wonder burn was difficult to cross!