Heading for Beinn Mhor today - was feeling a bit ropey - so settled for the climb from Loch Aineort
Parked up and away bang on 9.00 am, the first part of the walk is round the beautiful little coves of Loch Aineort.
A Heron was soon put to flight, but a single basking grey seal wasn't for shifting, perhaps because of the low tide. "And the islands hae ye seen em in the the wet,wet west
Wi the kelp a-clinging crisp abune the tide"

Once round by the inlet at Sloc Dubh,rather than head for Bealach Crosgard,it looked more logical to head up towards the shoulder of Spin.Still a bit overcast but a mild morning with a wee breeze.
Plodded up slowly and just about the 350 metre level,thinking of a break,I discovered this half buried in the hillside. 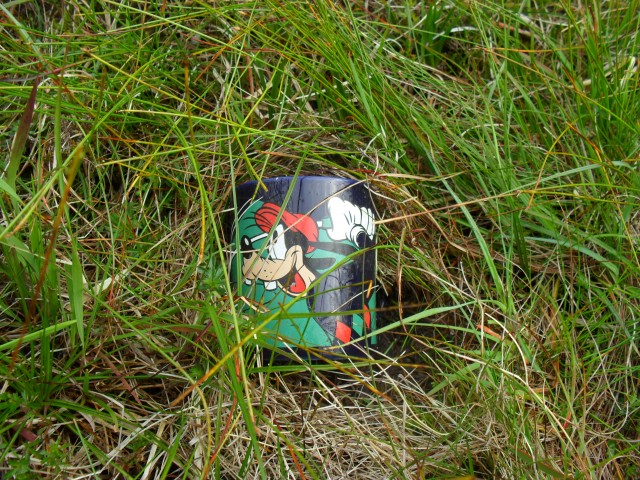 Goofy Golfer Mug - someone having a laugh

Put it in the rucsac - now at home - well washed and used now.
Sitting having my break I decided it looked just as easy to head directly to the summit ridge.
A bit steeper,with a couple of boulder fields to cross - but it was fine
Headed towards the left hand side of the large rocky outcrop that I thought would be near summit. Heading up to the ridge Beinn Mhor - not a bad hill for my sixtieth Graham

--- why does that number keep rattling aboot ma heid ??

Ah - of course - now I remember

After a few minutes I wandered out and back to the cairn to the south.
The earlier cloud was lifting and I was now getting fine views 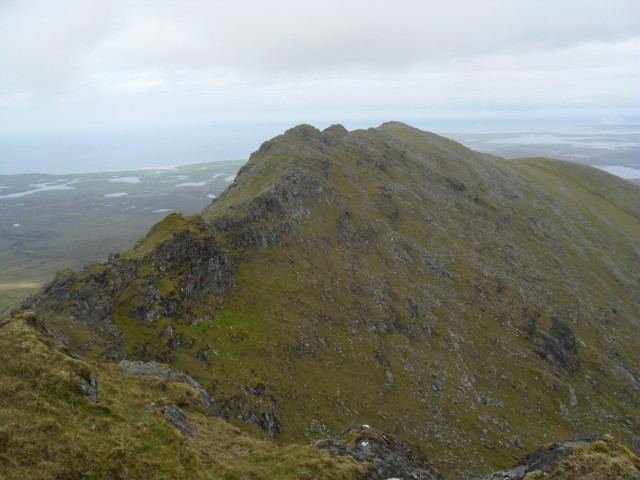 Looking along ridge to 608m top 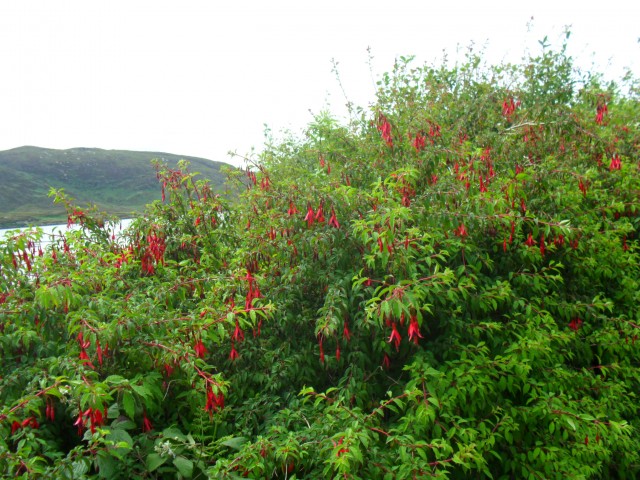 Back at the car about 1.30pm - treated myself to a coffee and cake at Kildonan Tearoom
Cracking summers day now - drove down by Machair Road to take this photo Went out to Lochboisdale and sat at front of hotel having a couple of pints in the warm sunshine.
Chatted to one of the locals - a Calmac worker.
Evening took a wee trip down to Polochar Inn (had a pint of course) 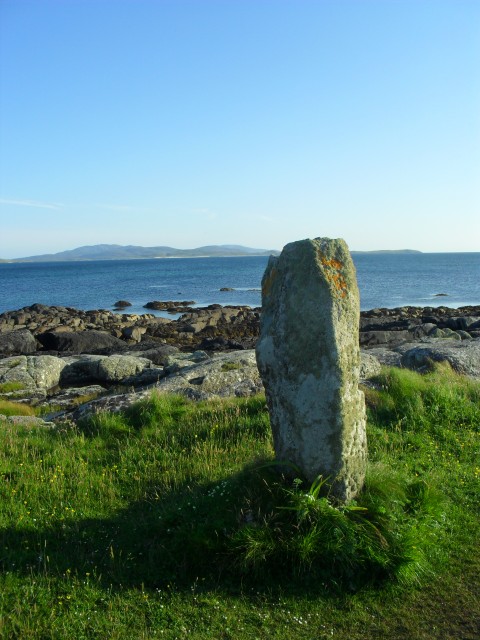 
Tuesday 12th July
A bit of a frustrating day
Up early to get out to Askernish Golf Course where I teed off bang on 8.30 am
Had the course to myself on a calm overcast morning
Played the first five holes no too bad - but then the swarms arrived - the FLIES
Absolute murder they were - thousands of the B*****s - could hardly see to play a shot.
By the time I had played the seventh I'd had enough- chucked it and went back down the 18th
Put a note and a donation through the clubhouse door.
Machair land of course - but it seems that after a poor spring and early summer the now good weather had brought them out big style.
Bit of a disappointment - was looking forward to playing the full course - will go back 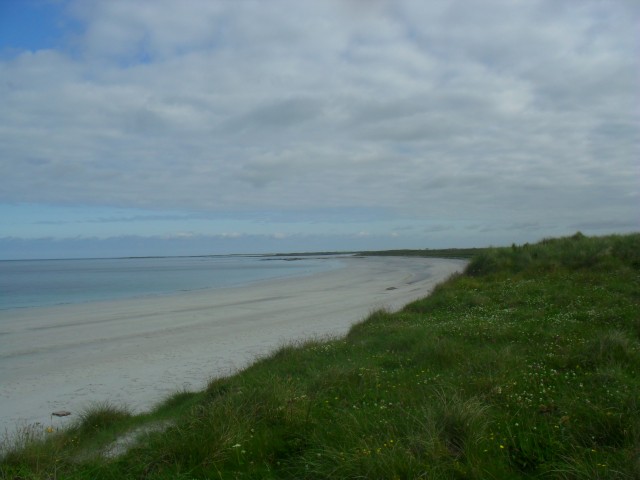 Drove north towards Benbecula - Breakast in cafe at Loch Bi
Over causeway to Benbecula - took a wee detour to look at campsite at Lionacleit.
Then up to climb Ruabhal, the highest point of Benbecula.
Not the most inspiring starts to the walk - you start at local rubbish dump/recycling centre.
Soon becomes a pleasant walk as you skirt past Loch Ba Una before the short climb up grassy slopes to the trig point.
Warm and sunny now with a breeze - and not troubled by insects.
A couple sitting by the trig point asked me to take their photo - they had cycled round the back of the hill. 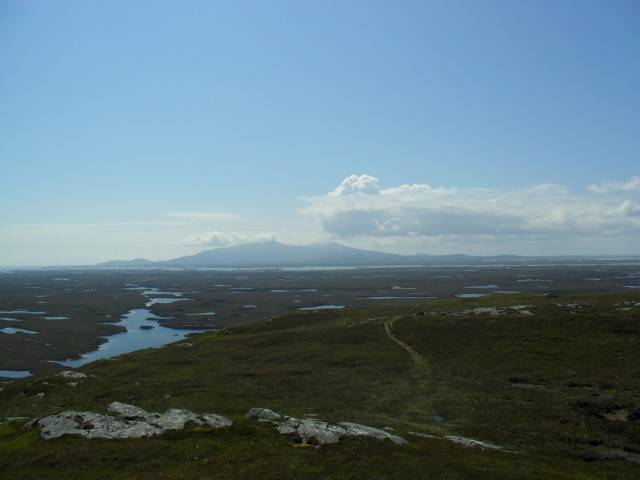 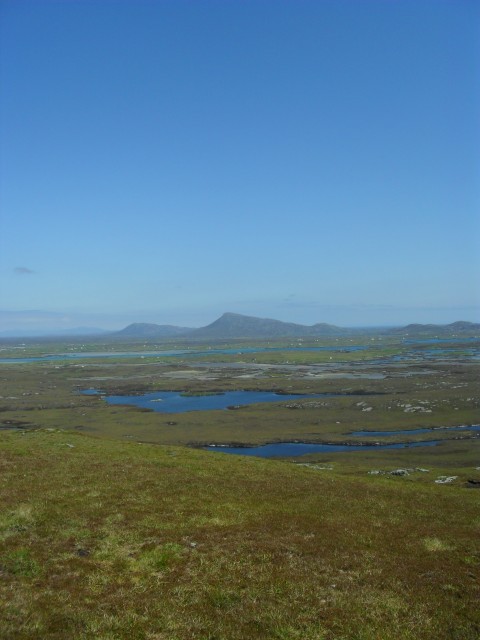 Benbecula is a beautiful low lying island studded with hundreds of wee lochans.
The walk up the hill was a pleasant wee amble.

Went out to the golf course - only a tenner - but again alas only played ten holes thanks to the flies and clegs.
A quick trip round Baile a'Mhanaich (didn't take long) then back south to the campsite at Lionacleit. Re: The Wee Barra's Hebridean Over Tour (2)

bumped up - been faffing about with this big style