Upland of the Corrie of Round Blisters and Friends.

Upland of the Corrie of Round Blisters and Friends.


So, apparently Beinn a' Ghlo means 'Hill of Mist', Carn Liath means 'Grey Hill', Braigh Coire Chruinn-bhalgain means 'Upland of the corrie of round blisters', and Carn nan Gabhar translates as 'hill of the goats'.

However, we went up Beinn a' Ghlo on a gloriously sunny and clear day; no-one to my knowledge developed any blisters, and we didn't see any goats. Carn Liath seemed quite grey though, so at least its Gaelic name was apt.

We set off from the parking area near Loch Moraig, glad that we had managed to park the other side of the cattle grid from the few coos and bulls that were busy licking the cars that hadn't been parked so thoughtfully. There were good views to the south west, once we had gained some height on Carn Liath. To the south west

It wasn't long before we reached the trig point on the top of Carn Liath. We looked across to the main bulk of the hill... compared to many of the rolling hills in the area, Beinn a' Ghlo appears to be much more complex - it has 19 corries in total, apparently. Some of the 19 corries of Beinn a' Ghlo

The path we had taken across Carn Liath was very clear.

Looking back towards Carn Liath

Looking towards the southeast...

Hidden at first, the bealach across to the col between Airgiod Bheinn was eventually visible, and we realised that we didn't have so far to descend before starting to ascend again. The ground conditions became rockier, and it was a fair walk before we reached what appeared to be the summit cairn. However, it turned out that there was a trig point behind it.... but even this was not the true summit.... we had a little further to go before, eventually, the real summit was reached. We then headed back towards the southwest, along the ridge... ...before starting to descend the nose of Airhiod Bheinn, which became increasingly steep the lower we went. At the base of the nose we joined a rough footpath which eventually reached the main track. The hills behind us remained very dominant... It was not as long a trek back along the track as I had expected, and we soon reached the car, which had been spared the tongues of the cattle. 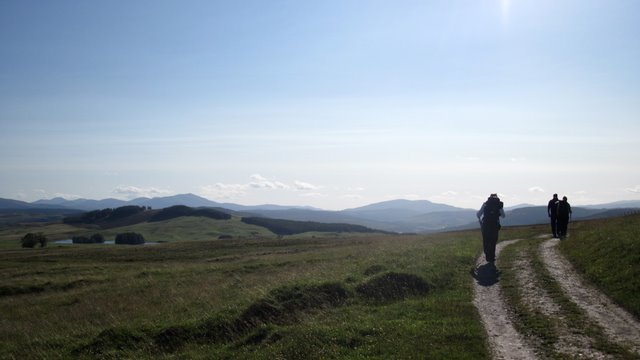 The day finished with al fresco dining at the finest restaurant in Braemar - the Hungry Highlander (or the Happy Haddock, as it's called by certain members of our club...)

Beinn a Ghlo.gpx Open full screen  NB: Walkhighlands is not responsible for the accuracy of gpx files in users posts

Re: Upland of the Corrie of Round Blisters and Friends.

Some great pictures there

You certainly had a good day for it too. It was mixed when I was up there a few weeks back, but a great little walk this one. I can only assume the path back has dried out, as it was an almighty bog fest when I was there, and made the trek back to the landrover track quite arduous