With two 60th birthdays to celebrate we set our sights on Stob Ban and Mullach nan Coirean. I liked the look of the ridge between the two when I was up the Mullach in 1997 so was keen to get up there again. We decided to use the route WH suggests starting at Polldubh where we were so excited to get going we forgot to put a parking ticket on the car, which was a slight worry when we remembered about it but not enough to spoil our day!

Here's a view of the two hills taken early one morning from the Ben Nevis path. 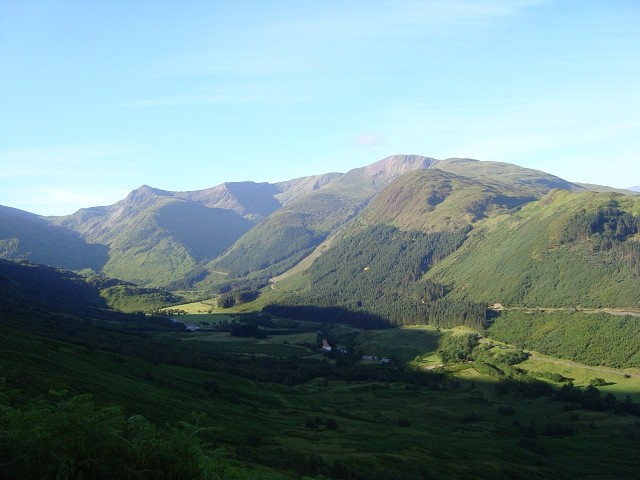 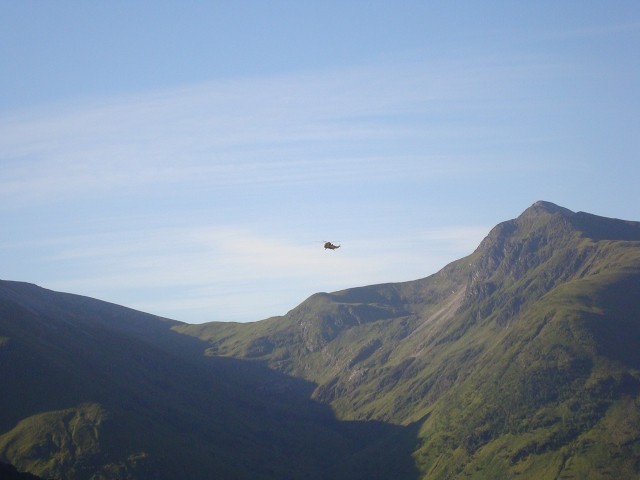 Moira and I left first and followed path up east side of Allt Coire a'Mhusgain. Chris and Janice were to catch up later. 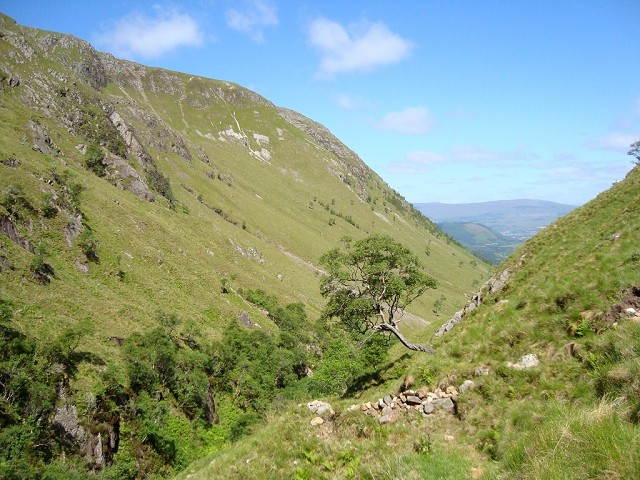 We saw walkers ahead which distracted us from a left turn we should have taken. We followed in their direction until the path came to an abrupt end at a piece of vertical rock beside a gully. Thinking it strange WH hadn't mentioned this we dithered around for a while trying to find handholds before resorting to a bit of inelegant grass-clutching to heave ourselves up. We then realised our mistake - that we should have gone left up the zig zag path - and had some steep climbing to put ourselves back on track where we found Chris and Janice sitting patiently waiting for us! 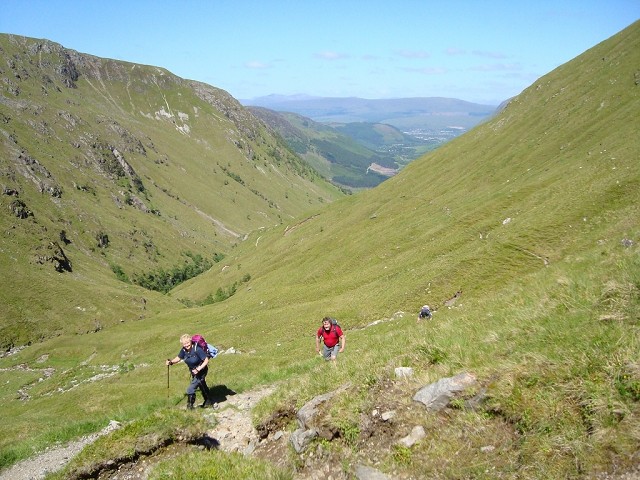 As usual Jack was up ahead scouting out the path. If I'd known then what I knew later I'd have encouraged him to go and take a drink at this point! 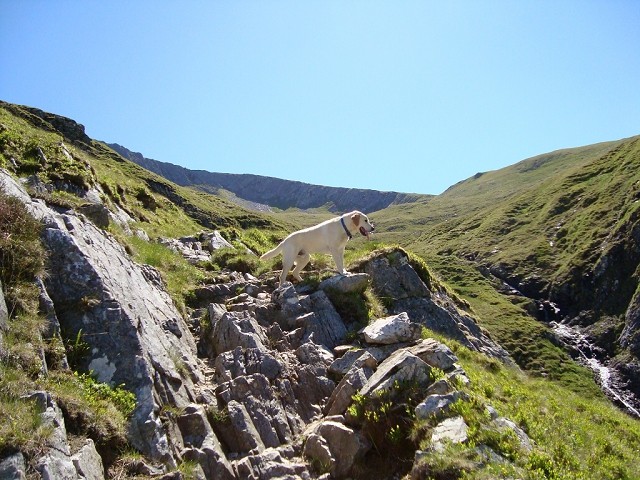 Now we got a proper view of the east side of Stob Ban. 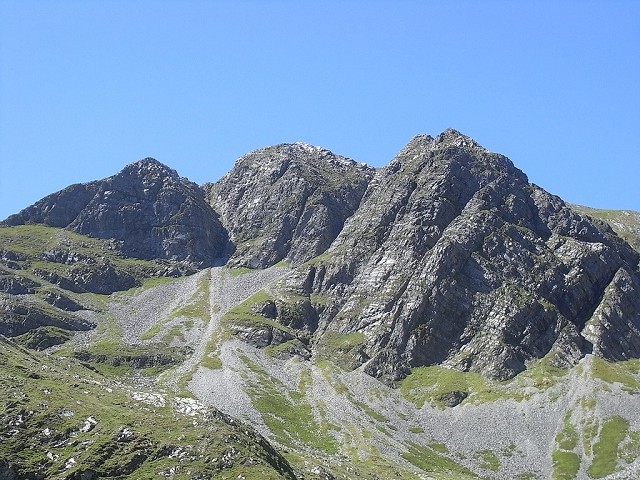 Looking down into Glen Nevis with the bulk of Ben Nevis appearing opposite. The final climb was steep with loose stones - the kind I'm happier going up than coming down so I was glad we were doing it this way round. My feet were so hot at the top I took my gaiters, boots and socks off and wandered around taking photos in bare feet which got me strange looks from the next folk up who must have wondered if I'd done the climb in bare feet. 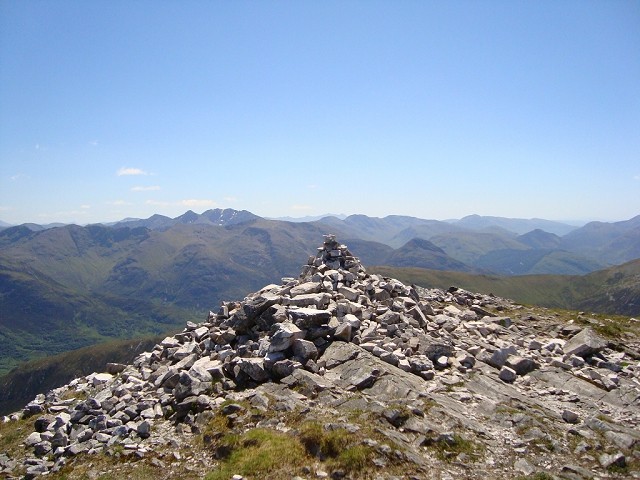 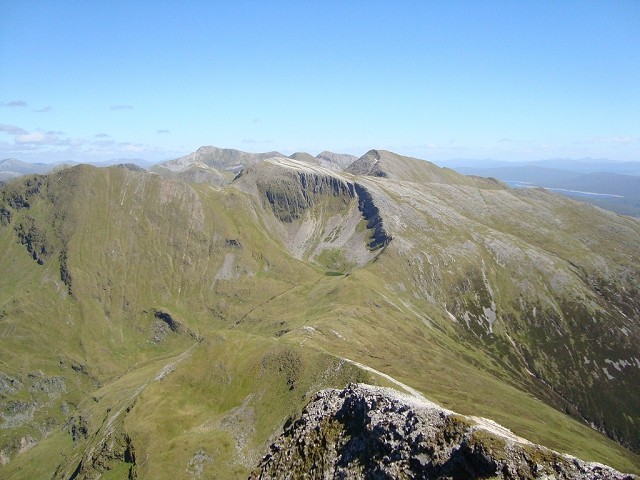 The Ben from Stob Ban 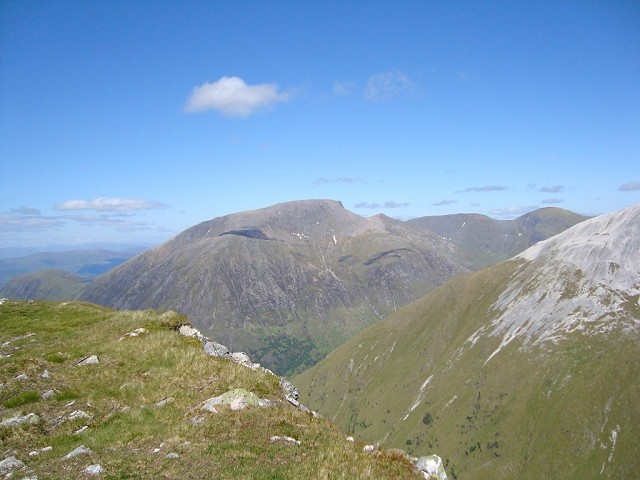 Jack checking out the way down. Once we'd all arrived Chris produced the champagne to celebrate Janice and Moira's 60th birthdays! The four of us on the summit cairn - all a bit tipsy, including the dog! 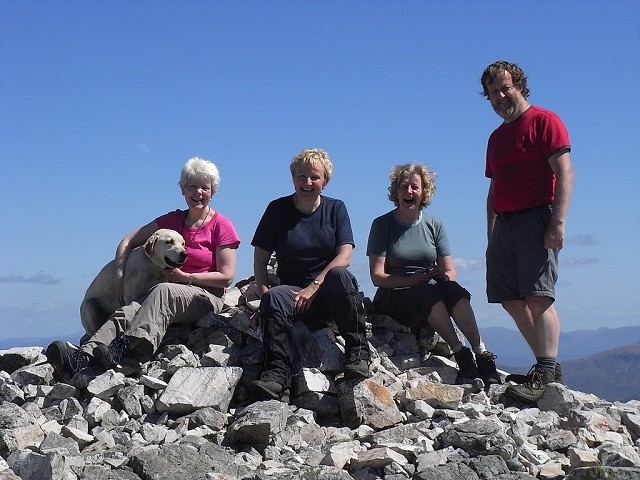 So begins the rocky descent. 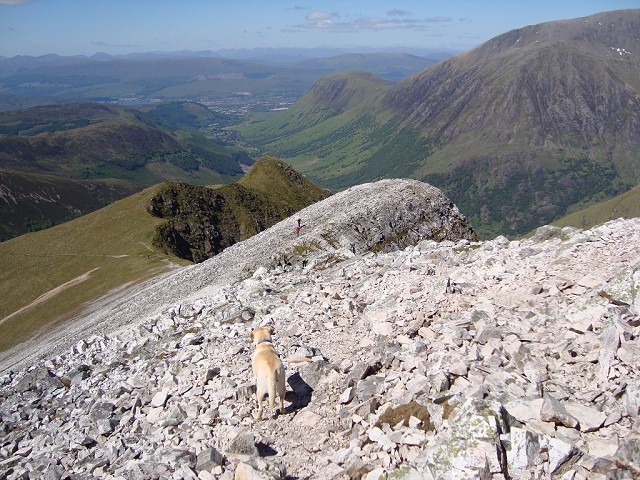 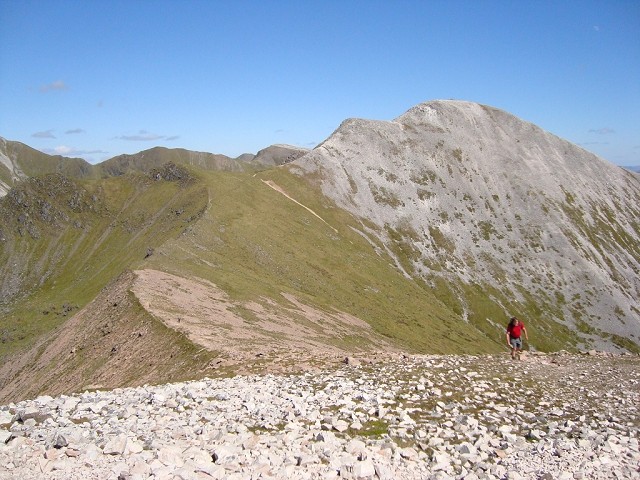 Finding water for dogs on the hill is not usually a problem but there is no water on Stob Ban or for most of the ridge.

Jack was feeling the heat so I gave him some of the water I was carrying and went on quickly until we found peaty pools at the col below MNC where he had a long drink and a wallow while the others caught up. 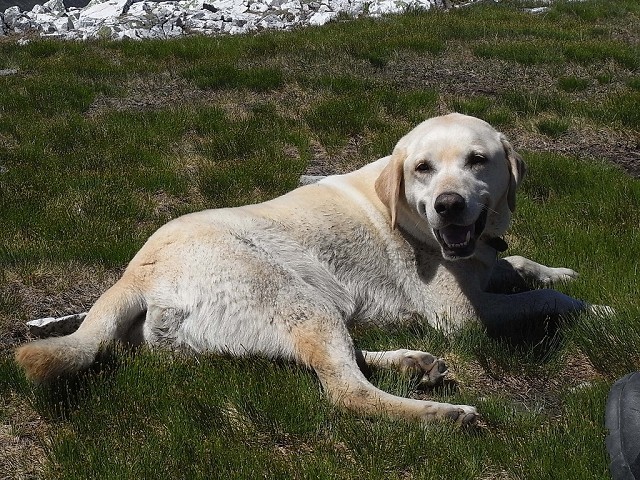 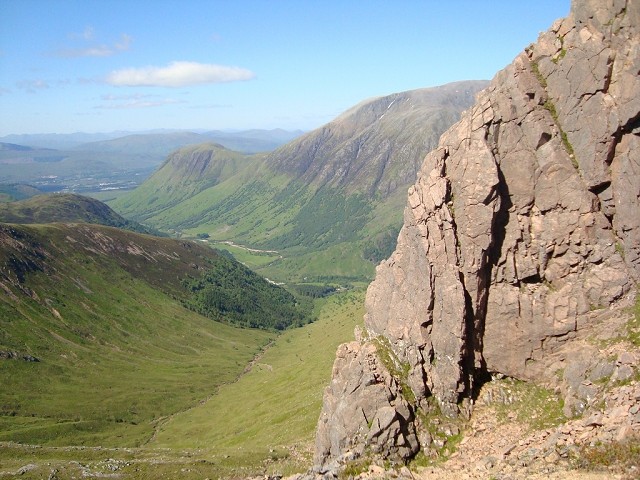 From the pale grey quartzite of Stob Ban to the red granite of Mullach nan Coirean. 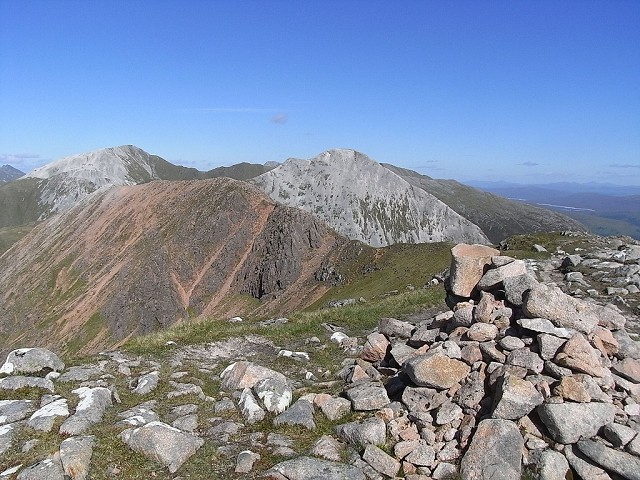 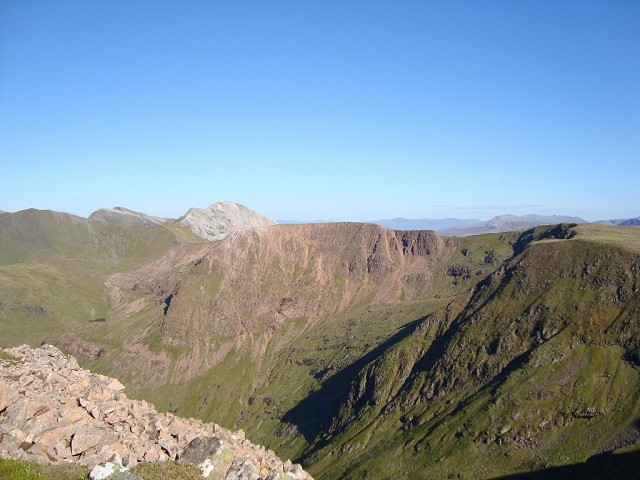 Start of the descent off MNC, the grey top of Sgurr a Mhaim opposite 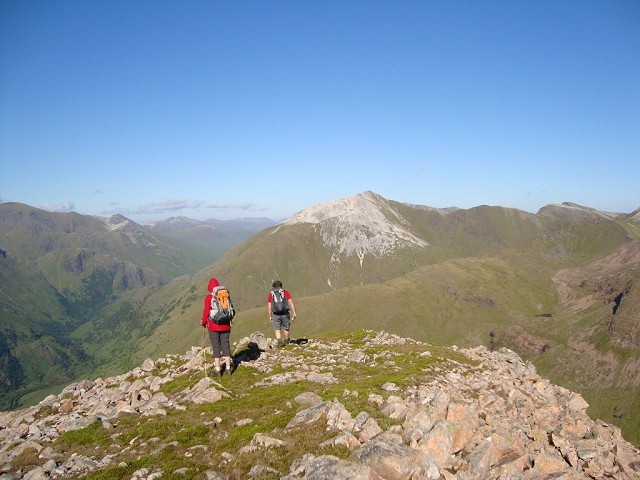 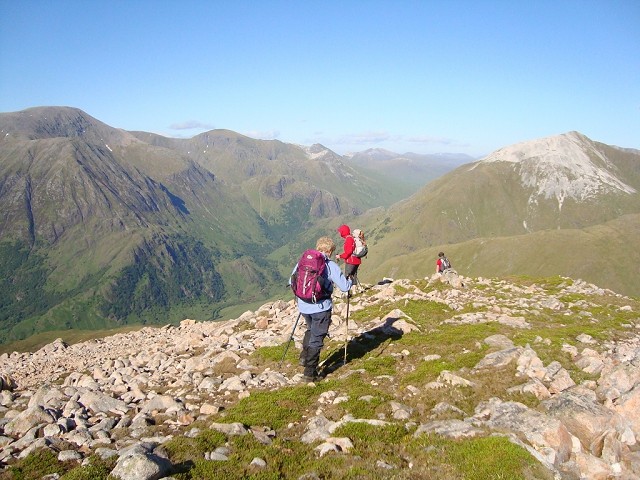 The last part of the descent was steep with bog hopping and we were glad to get on to the forest path that led back to the car to find we didn't have a parking ticket.

Another fabulous day ended with a meal somewhere in Glen Nevis but can't remember its name. It was still too warm to leave Jack in the car so I fed him and tied him outside where I could see him and the staff made sure his water bowl was kept well topped up!

I was waiting for gizmogirl to do her own report on this walk, but since she hasn't I've added a few of her photos (which are different from mine) in an additional post.

Fine day out on a pair of cracking Mamores

on a similar day. Mind you we enjoyed it as much as you enjoyed yours

Any tips for Devil's Ridge? I'm planning Ring of Steall - probably other way round than WH suggests - to avoid steep drop off Sgurr a Mhaim for the poor old knees

Don't be phased by it, take your time. One small hands on part, once over that your fine

Hi Dogplodder. You must be the infamous bare foot munro walker

happy birthday to the two youngsters. Yep there is not much water on those hills once you get to any real height. Nice report with excellent photos.

p.s. i done the ring of steall walking up Cairn a mhaim only a few weeks ago. There is no real scrambling required on the devils ridge, just use the clear bypass path.

Other reason I want to go same way as you is I don't fancy the wire bridge and would rather get wet boots at end of walk than at the start!

Hi Dogplodder, Just remember I went round quite fast. Take your time going up carn a Mhaim and expect 8 hours for the trip. Also take water for the dog because there is no water for the full trip.

Yes, I did notice how fast you did it - wow! You reckon I need to allow 8 hours for the round trip? Errm... I think more like 9 or 10 - I'm nothing like as young and fit as you and I'm up there to enjoy it and that includes lots of breaks to soak up the views!

Re: Tipsy on Stob Ban

Janice on ridge between Stob Ban and Mullach nan Coirean 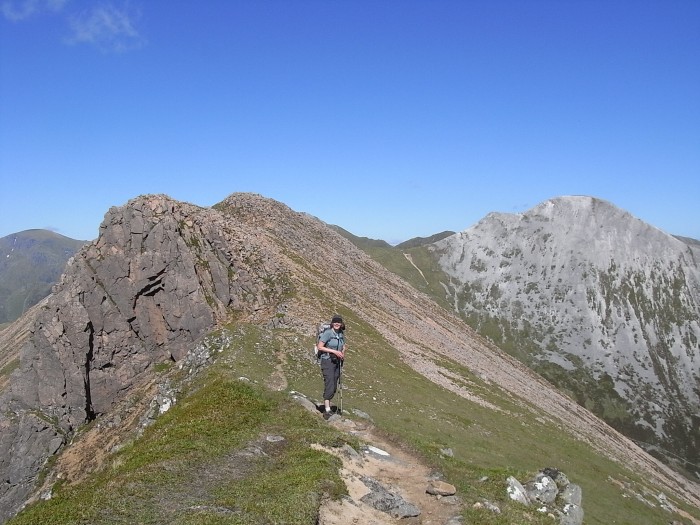 Chris and I about to drop down before the final ascent Someone will know which these are...... I'm not sure 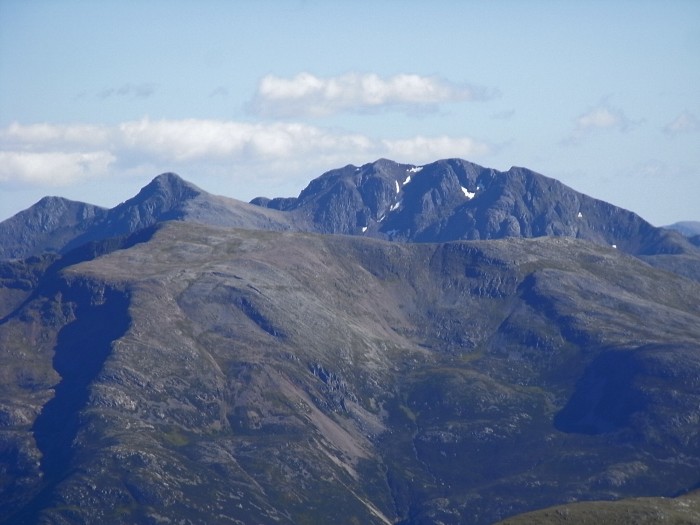