A beautiful morning, and a challenging – sometimes unintentionally so – short route over some of the most familiar peaks of Snowdonia.

our_route.gpx Open full screen  NB: Walkhighlands is not responsible for the accuracy of gpx files in users posts
From the Idwal Cottage car-park - empty at breakfast-time but overflowing a few hours later - a lovely stepped path heads up the trade route into the beautiful hollow of Cwm Idwal. 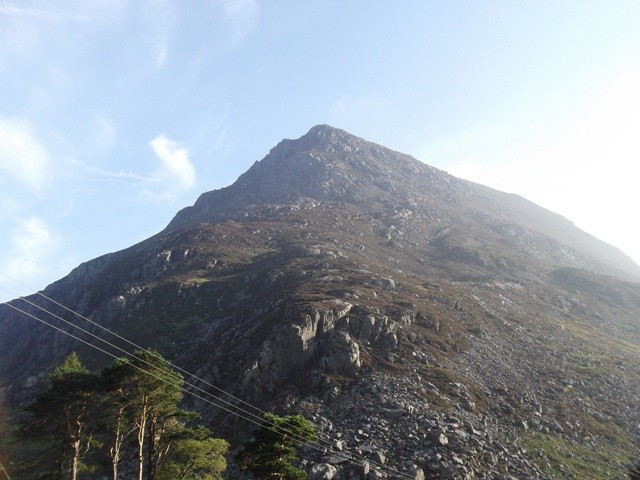 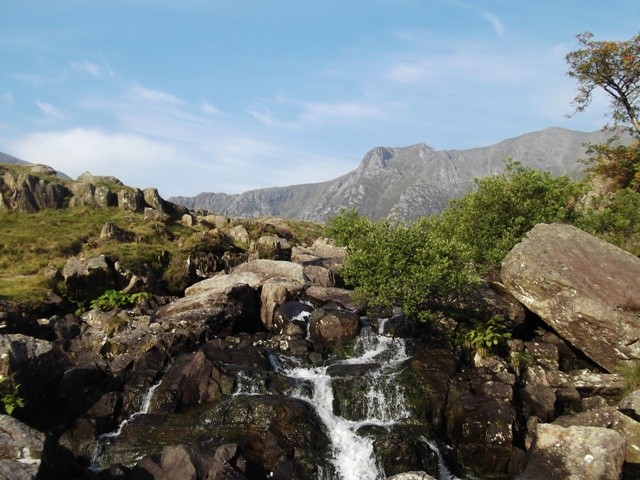 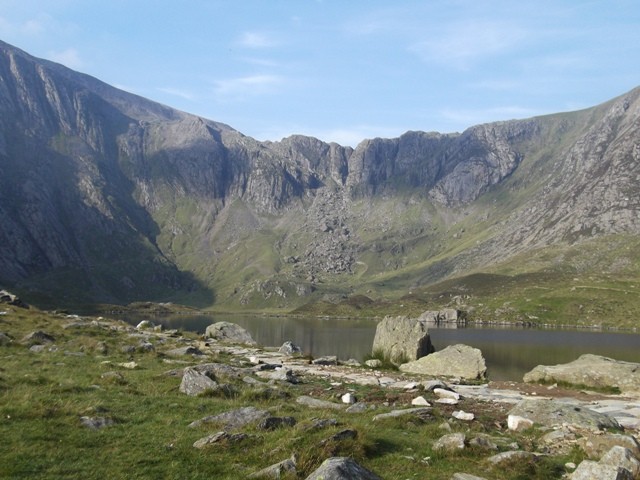 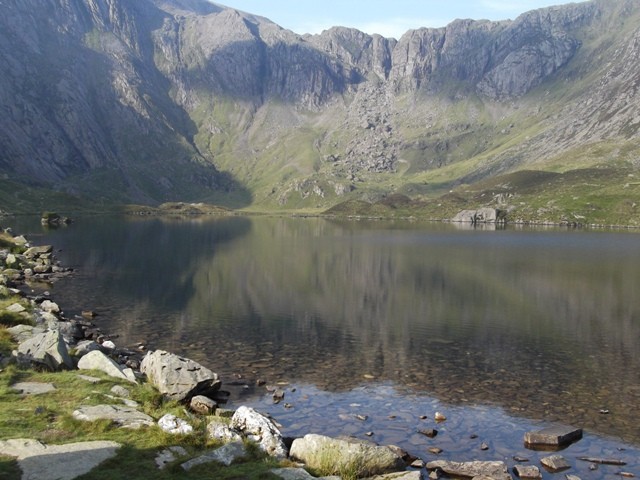 Having tried to find a circuit avoiding either of the notorious scree paths up to the Glyders, it was necessary to find a way up onto the crest of the Y Gribin ascent ridge: a path sets off quite clearly from the eastern shore of the lake, but it soon disappears. If tempted off by the number of cross-paths trending right towards Glyder Fawr, you end up with a very steep and testing scramble over grass, heather and intermittent rock. This looked like a wrong turn almost immediately, but somehow going back down seemed worse than carrying on, and it was fiercely tough – no clear ways and worryingly few holds; much the hardest thing I’ve seen in Wales, and making Tryfan later seem very easy indeed. Cresting the ridge and seeing a clear ‘motorway’ path coming in from the north made this feel even more foolish! (The safe route up seems to be straight east from the lake, heading for the far north of the ridge). Looking down ascent of Y Gribin Once up there though, Y Gribin itself makes for a good route up to the summits, a narrowing grass ridge with views to the lakes either side and then an enjoyable scramble up the steep rocky southern end with plenty of choices (again I might have found one of the hairier ones, crawling along a short but very exposed protruding rib…). Ascending along this rib may indicate a wrong turn! The high Glyder ridge has its own character, bleak and rocky underfoot with three jagged and very bouldery peaks to clamber up to, and, even through a slightly hazy day that never quite unveiled Snowdon, glimpses of some fabulous views. The descent to the east remains rocky and slow-going almost down to the col, but then the miner’s track contouring back across the face of the mountain towards Tryfan is a very good one. Tryfan itself rather belies its exceptionally steep façade when approached from this side, its popularity apparent from the multitude of paths that lead up through the rocks. While it’s an interesting and fun climb, there’s nothing very difficult about it at any point, and you emerge at the top (and into a picnicking horde – having seen three or four people all day until now, there must have been forty-odd sitting around the summit!) pretty quickly. One view of someone timorously attempting the ‘Adam and Eve’ manoeuvre was quite enough to convince me never to try it though! Tryfan from the miner's track After dropping down a reasonable corner-cutting way to the south-west, the path down through Cwm Bochlwyd seems to have undergone a lot of surfacing work quite recently and, while busy, it makes for a pleasant and very easy descent to the Ogwen valley. With slightly better navigation, this seemed a very good route around the Glyders, even if you might be left wondering about taking on Tryfan from its more challenging side next time…

Yet another fabulous report from Wales!!! Stunning, absolutely stunning! Sounds like you picked the hardest way up too. Bet you won't forget that one...especially after witnessing the Adam and Eve maneuver.

(still not completely sure i know what you mean by that - though I can image) More from Wales soon, I hope!!! Thanks Poppiesrara!

Nice pics there, poppiesrara. Been a while since I was up these hills as I did the Welsh 3000-footers back in '97, in the days before I'd even heard of Hewitts (maybe Hewitts weren't actually known as Hewitts back then?). You certainly got the weather for what is a fantastic group of hills.

I took this route up the Glyders and it was scree free.

New_Route.gpx Open full screen  NB: Walkhighlands is not responsible for the accuracy of gpx files in users posts
Nice to see veiws from Tryfan it was coudy when I went.
I'm back out tomorrow (probably in cloud again) for The Snowdon horseshoe.

Nice one, looks like a great alternate way to do it and I like the look of the wrong turns!

Nice one poppies, looks like an interesting route.
Fabulous scenery on those hills, I really must make time to visit them soon.

Hi - great post (find most of your posts great

We we did Y Gribin ridge we came up from Cwm Bochlwyd and it was just easy grass. Then we stayed below the crest all the way so didn't encounter your terrifying looking narrow bit. The Miners track is nice isn't it - surprised more people don't take that when they don't want to do Bristly Ridge

Thanks everyone, extremely kind.

Crawler - it seemed clear that there were easier ways up to Y Gribin; probably worth another try... I guess the miner's track is quite a long-ish detour, which may be what sends most people along the steep path next to Bristly.
Mackenzie - looks a good alternative (although you didn't get as lucky with the weather, I see from the report...), although it'd be a shame to miss out on Cwm Idwal altogether when climbing these.
Cheers, Red Peak - I only learnt what a Hewitt was last year... just Gorllwyn and Drygarn Fawr left. It needs a dry week (and possibly wellies even then...), and a bit of enthusiasm for what looks a proper 'bogtrot' and I'll be there!
And ND - it's probably not quite as exciting as it sounds! But I won't spoil it...

Great report from a great area.