We set off along the path that leads directly from the car park just beyond Kirkibost. A section of the southern Cuillin came into view as we reached the top of Am Mam and descended to the bay at Camasunary. It was at this point that the least experienced of us revealed that he had only brought one can of coke to drink for a long walk on a sunny day.

We crossed the beach and had to walk upstream to find a place to cross the river so we could join the coastal path on the other side. Despite commenting on how far out the tide was, we forgot that tides also come in; we would be reminded of this later on. 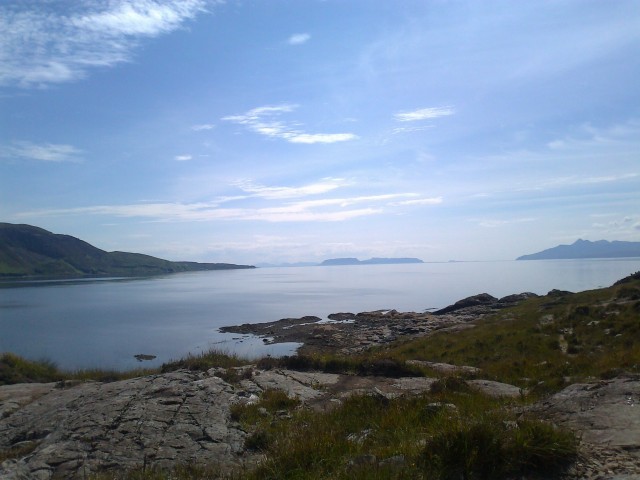 After crossing the river we joined the coastal path and continued round the headland with wet feet. There are various points at which the path diverges, and we chose a route that led straight to a big drop into the sea. Not being confident about jumping across it, we walked up the hill to find a better path.

As we continued, the southern Cuillin again came into view. The visibility was excellent, and even the reflection of the mountains in the water was probably a better view of these peaks than I'd ever seen before. I kept looking up to Sgurr na Stri on my right, because I knew that from the top of that I would be able to see the whole of Cuillin ridge and Loch Coruisk. I also kept glancing behind me at my desperately unfit companion, who was clearly struggling. Not wanting to miss this chance, I suggested that he had a rest by the sea whilst I climbed up to the top. Our other friend decided to stay with him, and I set off, dumping my rucksack about a quarter of the way up and continuing with just a camera phone, a walkie-talkie, and a bottle of coke. 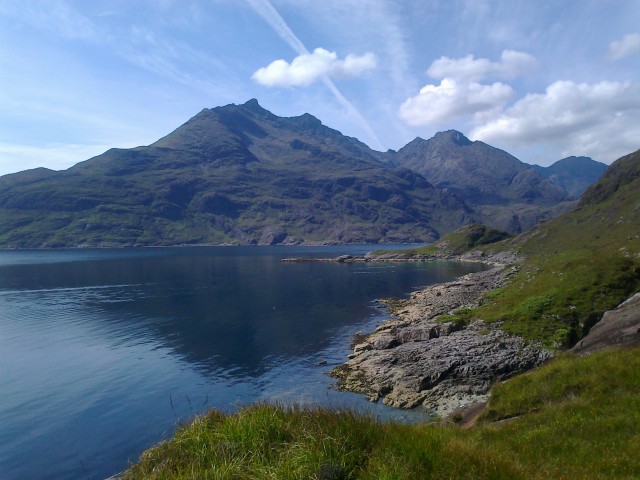 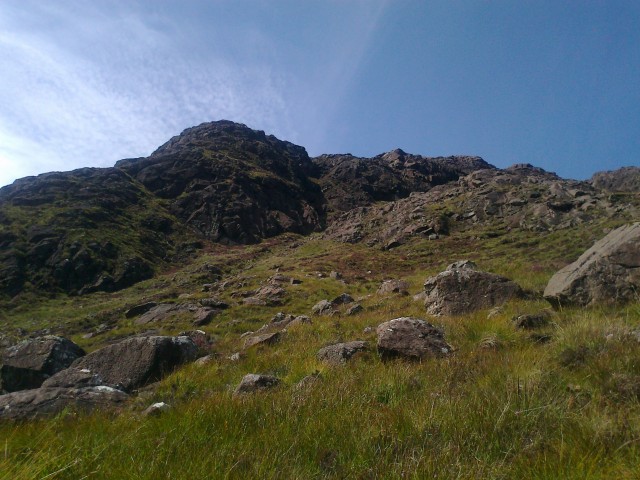 It was pretty hard going because it was very steep and there was no path. The grassy section was longer than it looked, and after about 30 minutes I began to feel quite light-headed as my friends informed me over the radio that I was still a long way from the top. 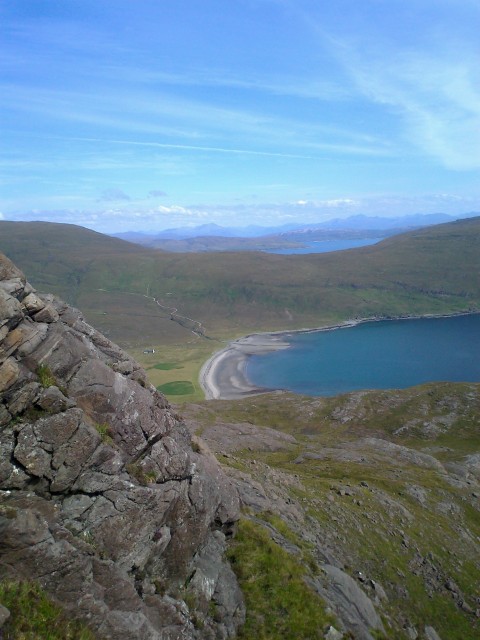 I narrowly avoided stepping on a snake just as I reached the higher, rocky section, which was also a lot longer than it looked from 400 meters away. I pushed on and reached the final horizon, running up the last part like an excited schoolboy as I reached the very top. The most spectacular view suddenly opened out in front of me; I could see the entire Cuillin ridge, Loch Coruisk, and the corries which give way to Glen Sligachan. It was absolutely stunning. I spent about half an hour at the top. I had to fight the urge to manically take photographs. Then over the very crackly walkie-talkie came the news that one of my companions had managed to twist his ankle whilst resting. I reluctantly decided that I should leave, and I started to climb down.

I soon realised that I was coming down by a different route. I was in a gully, which required lowering myself down drops and paying constant attention to the rocks sliding from beneath my feet - I was glad that there was no one behind me to start a rock slide. It took about an hour to get down, and I eventually rejoined my friends after spending a while searching for my rucksack which was a very similar colour to the rocks. When I tried to describe the view I had seen from the top, my uninjured friend decided to walk a bit further along the coastal path past Rubha Buidhe, as we knew that it would be possible to see much further into the Cuillin and Loch Coruisk just around the corner. He was not disappointed, and returned after 20 minutes raving about what he'd seen with a big grin on his face!

We returned along the outward route. When we reached Camasunary, we found that the tide had come in and we had to walk much further up the river in order to cross it. For a while I really thought we might have to swim it, but that would have been the last straw for our exhausted, hobbling colleague (who is also a poor swimmer) and we eventually found a place shallow enough to ford the river. We crossed the bay via the house - and swarms of midges and flying ants - and climbed up Am Mam again and then back down to the car. Walked same sort of route three years ago, following the footpath past the 'bad step' to the Loch and then returning. Crossing the river was a real nightmare, even though it had been dry the river in march was freezing, the stones in the river were slippery and without walking poles to steady yourself very unpleasent. On the way out I went barefoot and on the return I decided it was safest in my boots even if they did get soaked.
The bad step was much more fun,it seemed much harder returning than on the outward journey.
Great pictures, and great weather. Yes it's a shame i didn't get to do the Bad Step - another reason to go back again!

Some wonderful views you got - lucky bastardos