We were supposed to climb this mountain last Tuesday but with a visit from Grandma Antonia wasn’t keen, so we postponed it, much to my chagrin because the forecast last week was superb. Dare I suggest maybe even too good; with high temperatures and clear skies sunburn would’ve been a real possibility. Round, bald bloke with sunburn….. Id’ve been a ringer for the Tango man.
Anyway with another couple of days off and Tuesday having the better forecast we decided to go for it. MWIS and the Met Office couldn’t agree so we decided to put our fate in the hands of the guys at MWIS who said that there would be clearing skies and an 80% chance of cloud free summits.
A 6am rise to the encouraging sound of rain lashing the windows and I was beginning to wonder if this was a wise decision, but that was exactly what the forecast had promised so all was as expected.
We’re starting to get to know the M8 quite well now, so every time we get to that big steel funnel about half way along it I can’t resist shouting out “ Time for Teletubbies!” Does anyone know what it’s actually for? My guess is something to do with noise collection.
Anyway there was no baby face shining down on us today, just that horrid rain so we were please to see things definitely brightening ahead of us. We could even see some hills through the haze, Hooray!
We parked, as is expected, at the Inveruglas visitor centre and pressed some poor American tourist into taking our photo. He seemed to be the only person who could speak any form of English and I didn’t fancy a frantic gesturing and shouting session with any of the other nationalities. Us at the start with Ben Lomond behind.

Antonia: We got in the car at 8 in the morning it was raining and the sky was full of clouds, but we were very exited because this was our second Munro.
Paul: 10.55 and it was time to start. All of the hills were shrouded in cloud so I was beginning to doubt the accuracy of that 80% chance of clear summits. But at least it wasn’t actually raining.
Antonia: We got to the car park at half past ten and started walking at about 11. We had to walk along a road for a few minutes then we had to go through a gate so we could walk along another road that had no cars or vans driving on it. We had to walk along that road for an hour. The weather still didn’t look very happy though it didn’t rain.
Paul: That long slog along the road. A’Crois was looking really impressive and moody with clouds round the summit. I still fancy trying that mountain sometime so I was looking for possible ways up it. Ben vane is no shrinking violet either considering it’s the smallest Munro.
We were joined part way along the road by a guy from Aberdeen who was taking advantage of the family being away and was bagging a few hills during the week. The company and conversation helped to pass the time. Ben Vane from the road

Antonia: My mum says that I have lots of imagination and when I looked up while we were walking along the road I saw that the way the rocks and the trees were arranged it looked like a wee frogs face. I thought that it looked amazing so Paul took a picture of it. Antonia's wide mouthed frog. Bumps on top for eyes and trees for it's mouth. I'd've never spotted this.

We also met a man that had parked his car next to ours in the car park he walked with us most of the way on the road then he walked away and left us behind when we stopped for a rest.
Paul: A whole two minutes off the road and Antonia put her foot into a bog about half way up her shin. She wasn’t impressed and started to say she wanted to go back. NOT A CHANCE! There was no way we were driving two hours just to walk along that road so it was time for a lot of encouragement and coaxing to get her going again. It did however result in her testing every footfall for the rest of the day, which slowed us down quite a bit.
Antonia: Just after we left the road I stuck my foot in deep mud and Paul took a wee picture of my wet muddy shoe. After a wee break, we carried on walking up, up, up and further up. Once we started to get a lot higher it felt like we were getting surrounded by the clouds, it started to spit with rain though it didn’t start to get harder it just kept on spitting.
Paul: After the boggy lower section the path takes a steep ascent to a slight plateau for a short stretch and then you arrive at the bottom of the main ascent. People have reported that this is a steep hill and they aren’t kidding. It just rises straight up in front of you, and today, all the way into the clouds ( which were going to clear remember.).
By now we were getting some good views back to Loch Lomond and Ben Lomond and across towards Ben Vorlich. The view back to loch lomond Because we were able to make out some good landmarks I took the opportunity to show Antonia some more map and compass work, plotting our position by taking bearings. Now pay attention Antonia, this could save your life one day.

Antonia was still a little miffed about her wet foot so I cheered her up by holding a bleating contest with the sheep on the hills around us. BAAA! BAAA!
Antonia: Also, we were getting closer to the scramblier parts of the mountain. I found it really fun going up the scramblier parts and on one of the scrambles Paul had to push me up because it was too high for me to get up by myself.
Paul: As we climbed higher we met some people on their way down, including the guy from Aberdeen. They told us we were getting nearer the summit but there were some good scrambles and a false summit before we got there.
The scrambles were great fun and exactly the sort of practice I was asking about in my post on the General discussion forum. Lost count of the times I said “ This must be the false summit they were talking about……No wait, this must be it…. No wait,…..Oh B****R!” There were some good atmospherics.

Antonia announced that if this next one wasn’t the last then she was going back down.
Yet another scramble and just as we reached the top of it Antonia said “ That’s the top.”
“Where?”
“There. It looks like the pile of stones on the top.”
“Where?”
“There, right next to your head.”
And sure enough two more steps and we emerged onto the Helipad that is the summit of Ben Vane. 3.30pm, four and a half hours to the top.
Antonia: We finally got to the top and we nearly whacked our heads on the pile of stones which marks the top of Ben vane, it was still spiting lightly.
Paul: We stayed at the summit for about half an hour and the clouds that were going to clear …didn’t, so I described to Antonia what we should be able to see in each direction. Don’t think she was impressed. 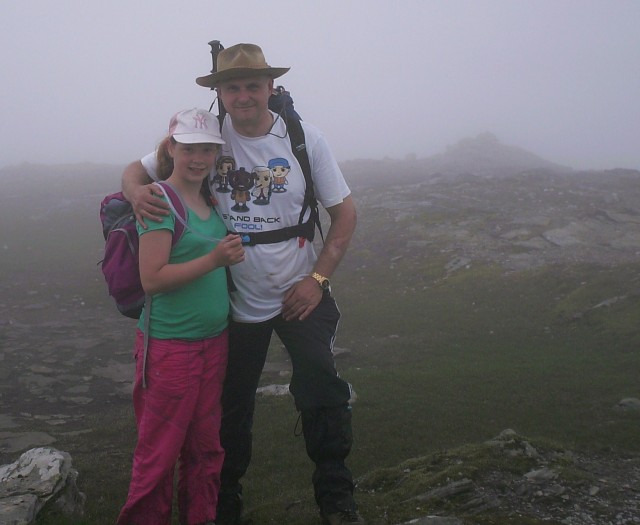 Antonia: I mostly went Doon on my bottom so the back of my trousers had got muddy and wet.
When we finally got to the boggy part at the bottom of Ben vane it started to rain a lot harder than it was before. We were trying to see if we could find the hole which I had stuck my foot into earlier, though we couldn’t find it so we carried on walking.
Paul: The descent was equally as tough as going up. Picking our way down the scrambles and stubbing our toes into the tips of our boots. We hardly stopped at all on the way down and we were both getting rather tired and moody. Antonia coming down on her bum.

Then there was the long slog down that road. Oh how tedious that was. I’m thinking about tackling Ben Vorlich over little hills just to avoid having to do it again.
Antonia had gone on ahead again just as she did descending Ben Lomond, and in just the same way I caught her up when she stopped because she was concerned about the livestock on the road. Sheep this time rather than cattle. Mind you they were chewing grass in a very menacing way.
Antonia: Soon we got back onto the boring old road, as Paul called it, and finally we got back to the car. We took our boots off and went to the closest hotel to get a wee drink, then we set off straight home.
Paul asked me if I found it harder than Ben Lomond or easier and I said that I found Ben Lomond easier because Ben vane is a very steep munro.
Paul: All in all we had a great day on this hill. The distance is about the same as for Ben Lomond but it’s a tough mountain because there is so much distance along that road with little height gain that the mountain itself is unrelentingly steep. Total time taken 8 hours 45.
So, who’s next then? Antonia said it should be Ben something. Thanks for that Antonia, a great help.

Re: Ben Vane Going Up With Wet Feet and Down With a Wet Bum

Re: Ben Vane Going Up With Wet Feet and Down With a Wet Bum

Thanks magicdin. Yeah it's amazing what kids will spot that an adult would never see.
Ha. I knew there must be a way to do A'Crois. Been thinking about it as a way up and then along to Ben Narnain and The Cobbler. Prob a step climb to start but might be worth a look.