we have always planned to do some hillwalking in glencoe, but we kept postponing it for couple of years actually. always some closer or more attractive (is it possible at all???) mountain or place came up. and every time we drove thru glencoe we always stopped just to admire the high and rocky mountains around. for me, glencoe is one of those places that seems to have some magic, that moves my hearts.
finaly we made our plans come true, in july during the 2.5 weeks we climbed 6 munros in glencoe, two each trip. you have already seen pictures from bidean nam bian, now beinn a'bheitir and next is going to be buachaille etive beag.
but lets concentrate on beinn a'bheithir now. it was a great 9 hrs walk.

amongst all the options of climbing it we chose the most difficult one - it was detailed in the 'munros' book. the difference between this one and the one from walkhighlands is that we climb up the 'second' ridge (scrambling involved) and not the first one just behind the school, therefore we tackled sgorr bhan and not beinn bhan.

the day was great, not a single cloud for the whole day, no wind whatsoever. our route included some scrambling therefore we had a little bit of everything -rocks, grassy slopes & bog

so lets start. we left the car at the visitor centre car park and followed direction specified on this website untill we reached the school. WH's walk starts here. we decided to follow the other route therefore we continued ahead for about 1 km untill we reached the gate with stile and a signpost to glen creran. we passed the gate and from the description in 'munros' book we knew we were supposed to tackle the ridge a little bit 'from behind'. i was sure that we will actually see some cairn or some other mark to let us know where to leave the path and start climbing up. we had some trouble to locate the exact place where we were supposed to leave the path and start climbing up. no cairns, although book never mentioned any i was hoping for one

we decided to come back a wee bit and try there... we found a faint path (just at the stream) which we followed, definitely it looked used by some walkers but it soon dissapeared. there was a couple who walked behind us and they started the climb up just after crossing the stiles, they walked along the fence for some time but then suddenly they appeared on another side of ridge and i'm not sure whether they followed some kind of path or they were just looking for a good place to climb up, just like us...

beata looking for some clues 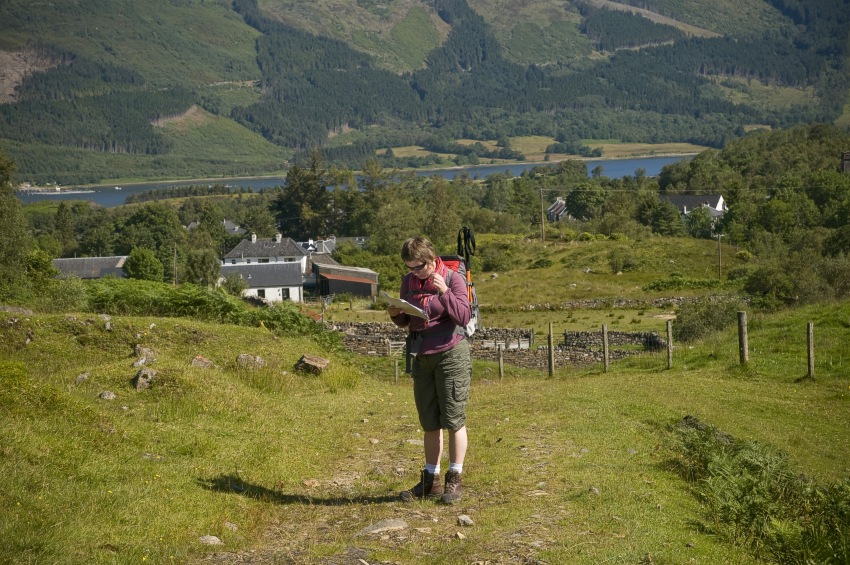 i took this pic before we started climbing up, we were still on the 'main path', here you go - 'our' ridge to the left, to the right is beinn bhan, the way that WH recommends. 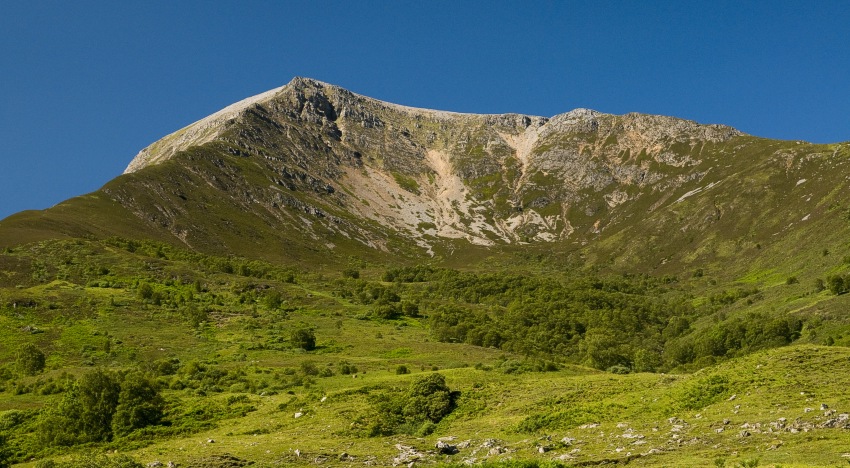 as i said, the path was very faint at start, then it dissapeared and we had to wade thru all sorts of hillside plants. but after about 15mins we crossed something that looked like a path again and we decided to stick with it. the path then turned into a well defined track and we were 'sorted'

looking up towards sgorr bhan 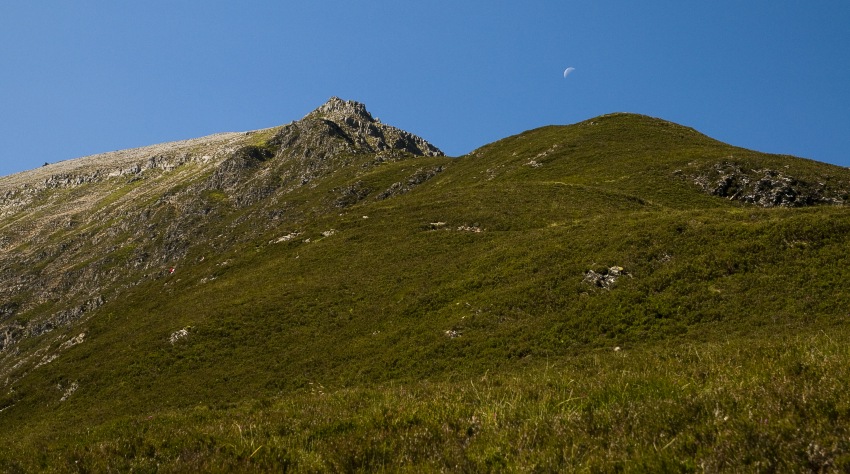 and looking down to balachullish, loch leven, mamores and The Ben. 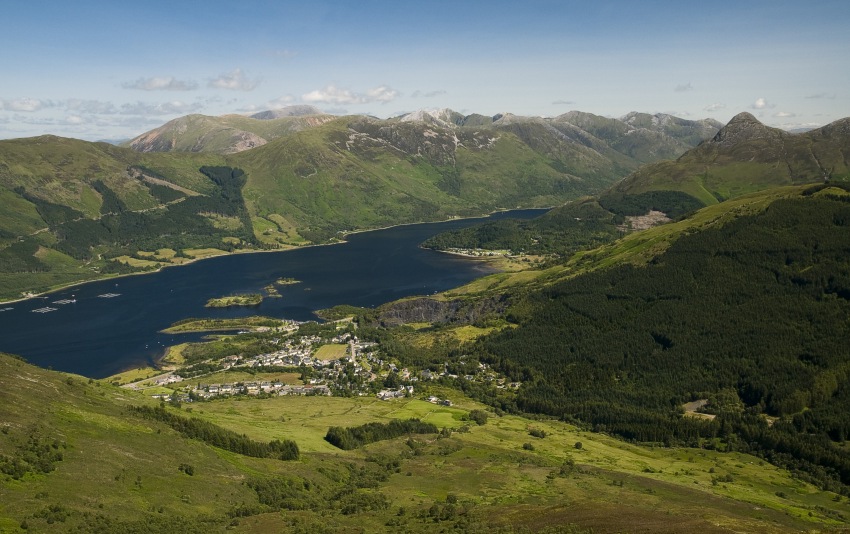 the rocky bit just before us 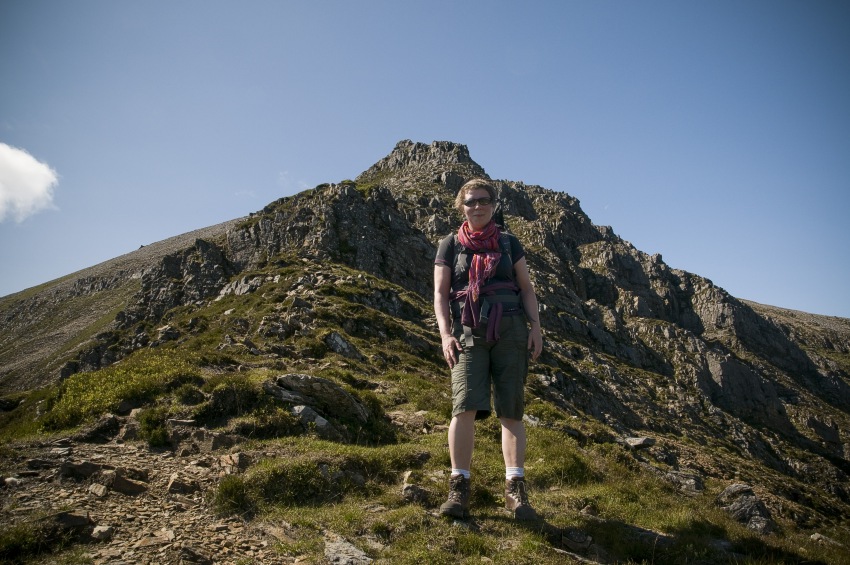 the ridge walk was straight forward, with some scrambling. nothing too tricky and nothing too exposed. i marked 3 steps or shelves as you prefer that required some more attention 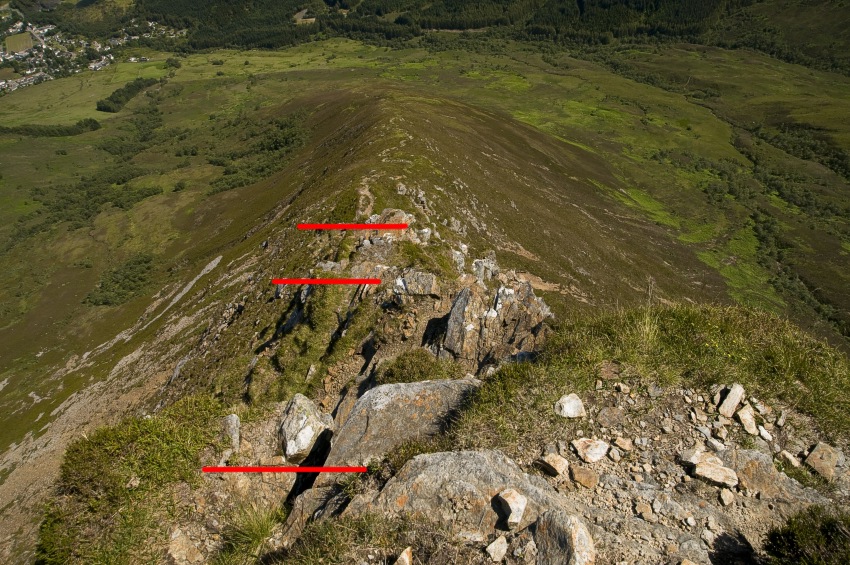 and some more scrambling, which actually was a great fun 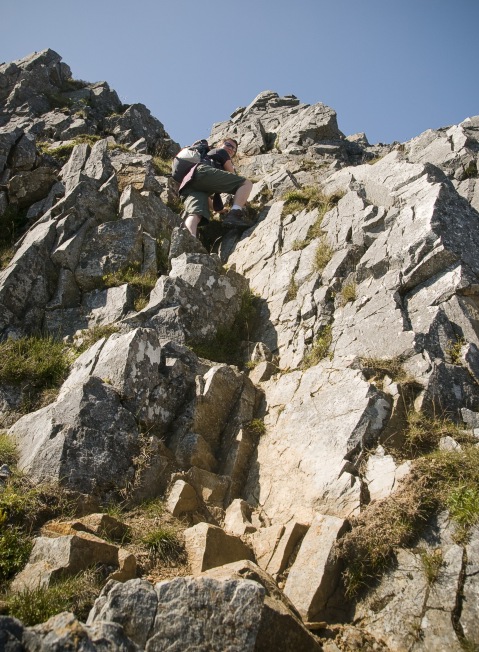 here we are, rocky bit passed 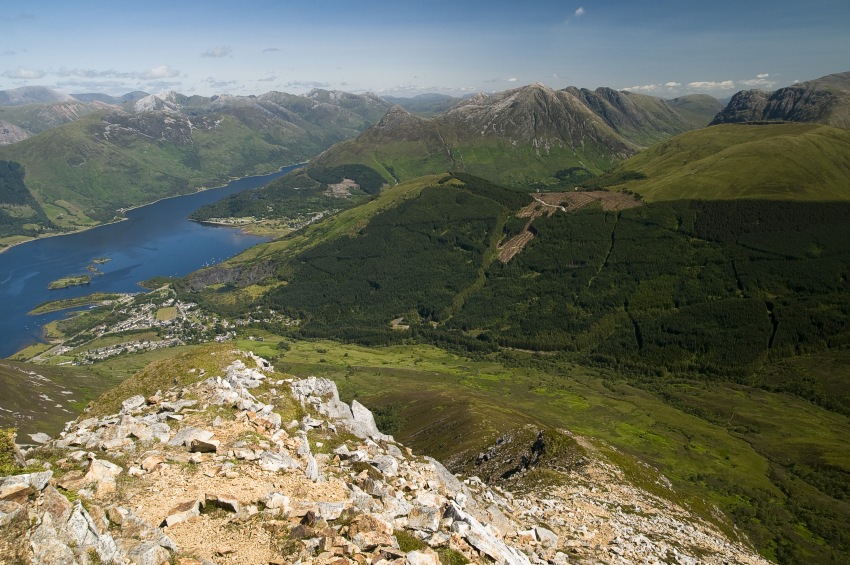 we managed to the top of sgorr bhan within 3 hrs, taking our time and enjoying the sunshine
views were spectacular 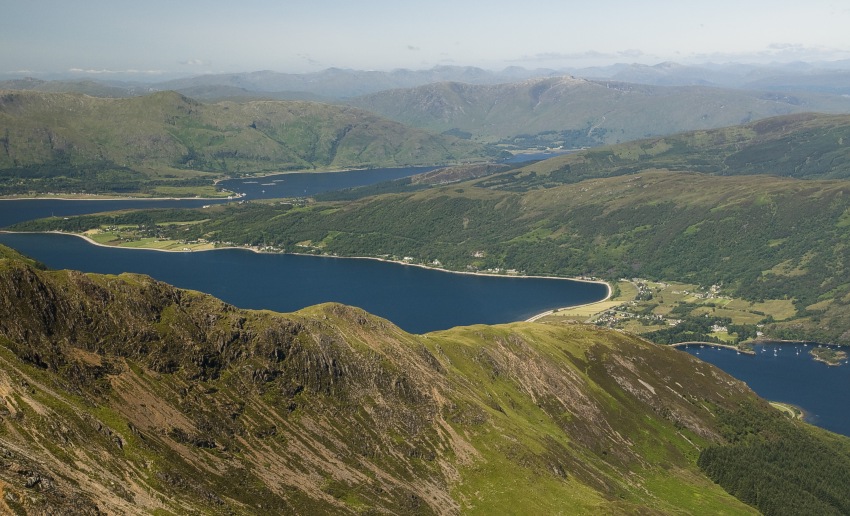 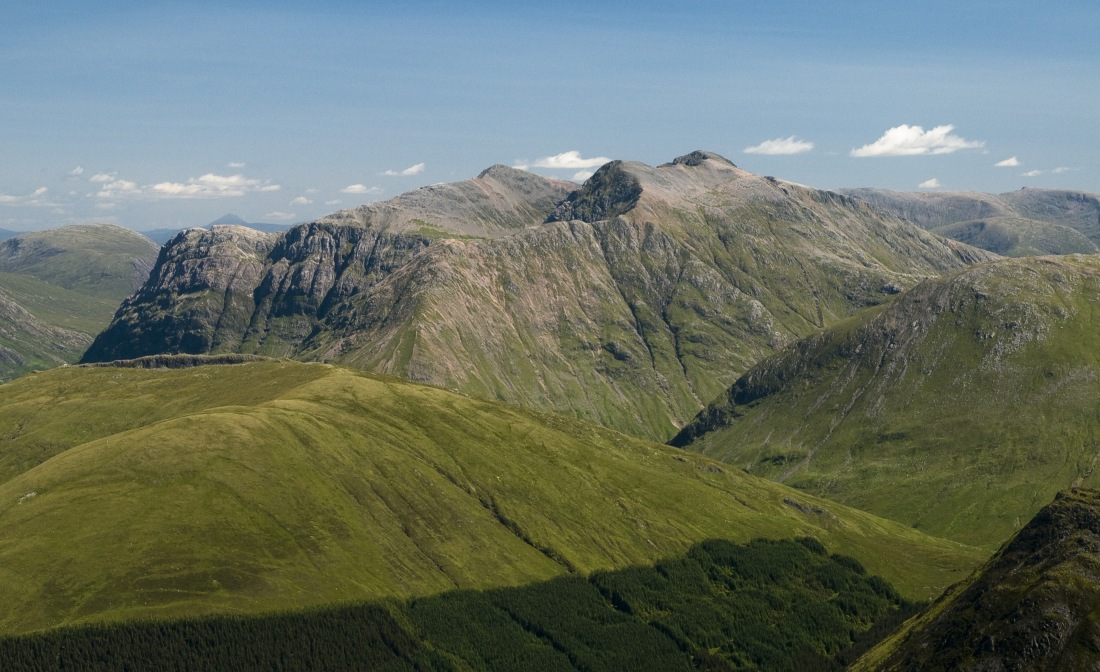 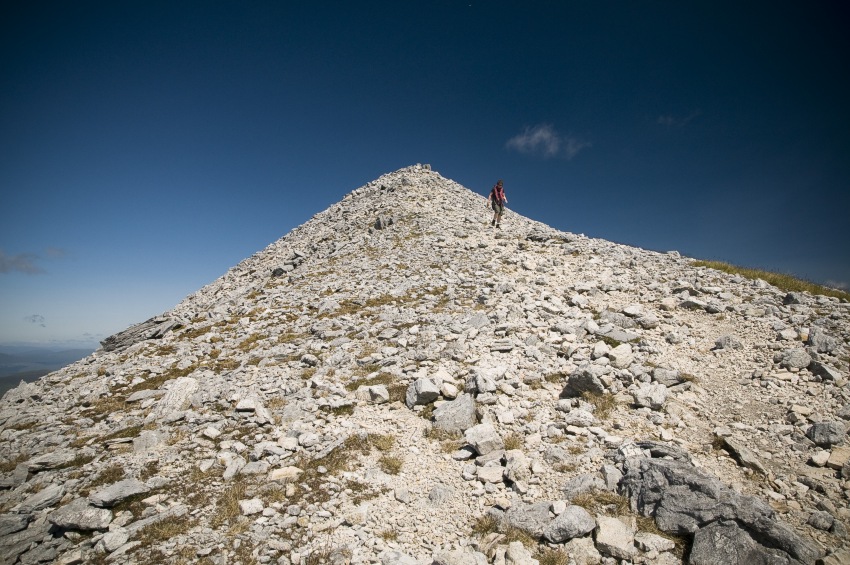 from sgorr bhan to sgorr dhearg is about 15mins walk 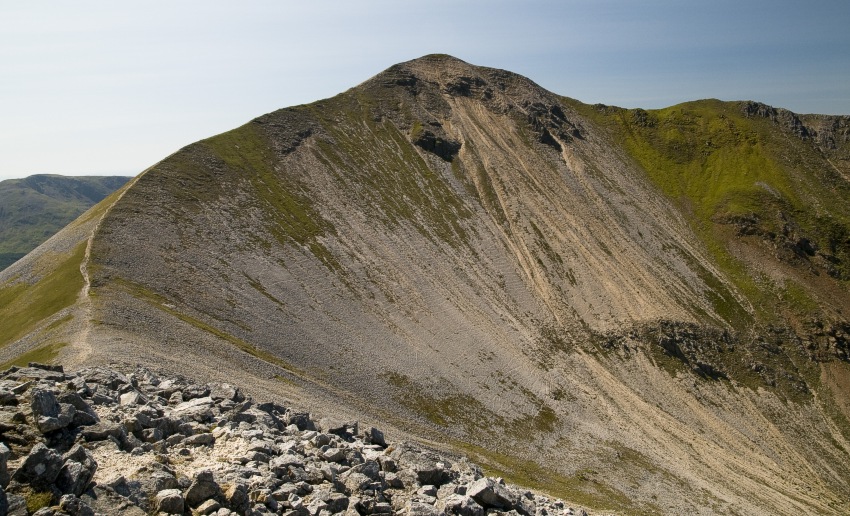 the summit of sgorr dhearg 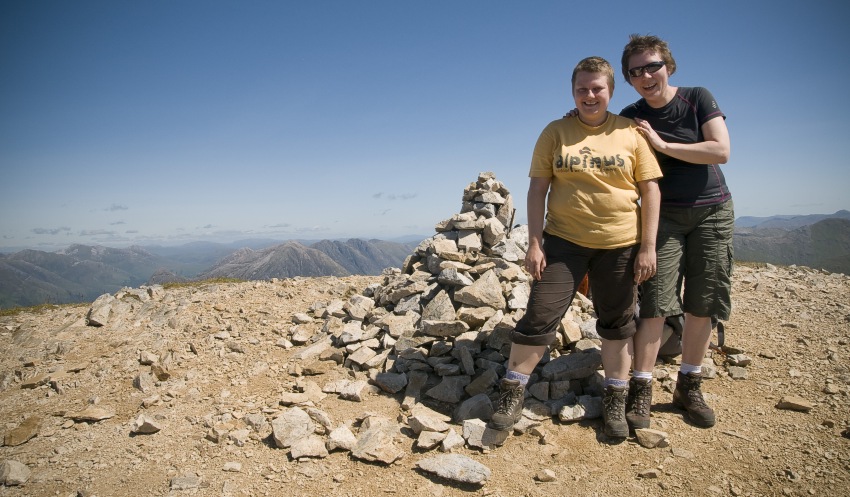 and even more fantactic views! 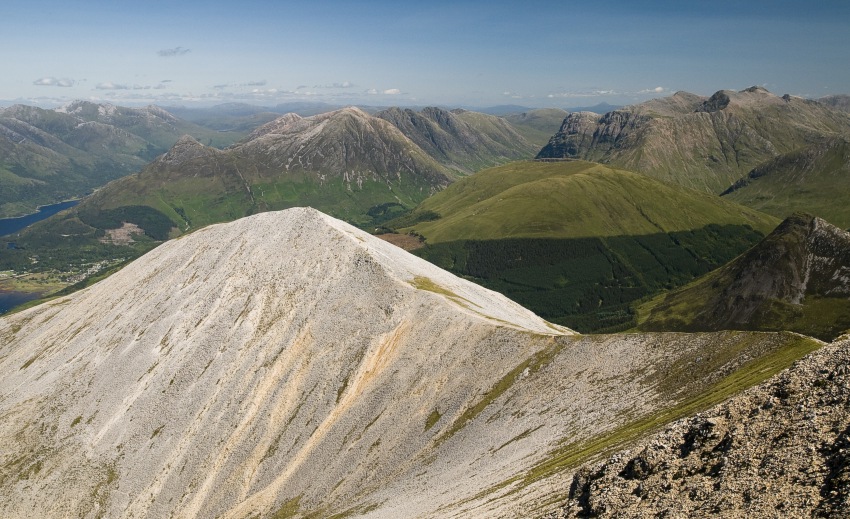 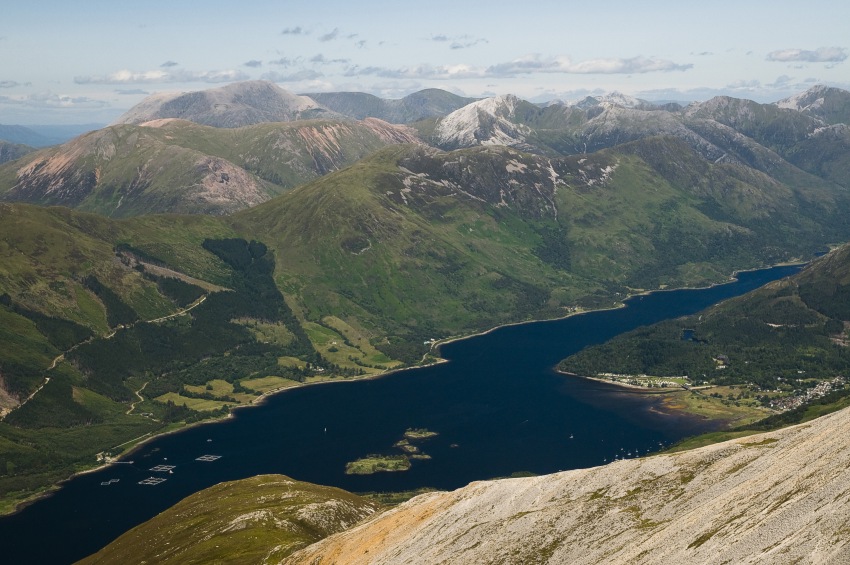 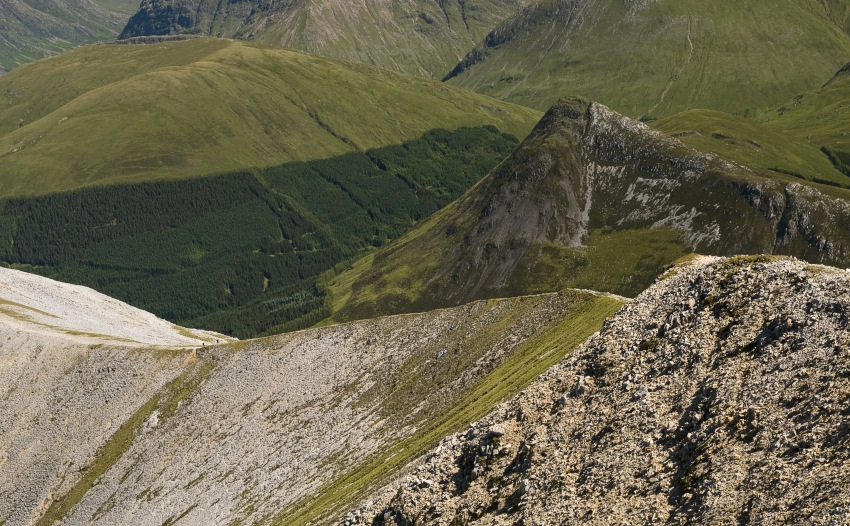 and with our next destination - sgorr dhonuill 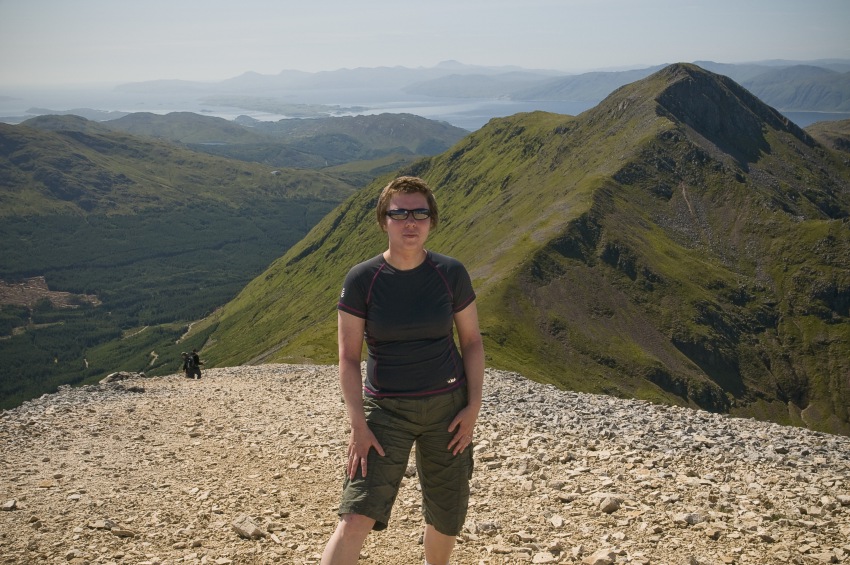 from the col between the two munros looking towards sgorr dhearg 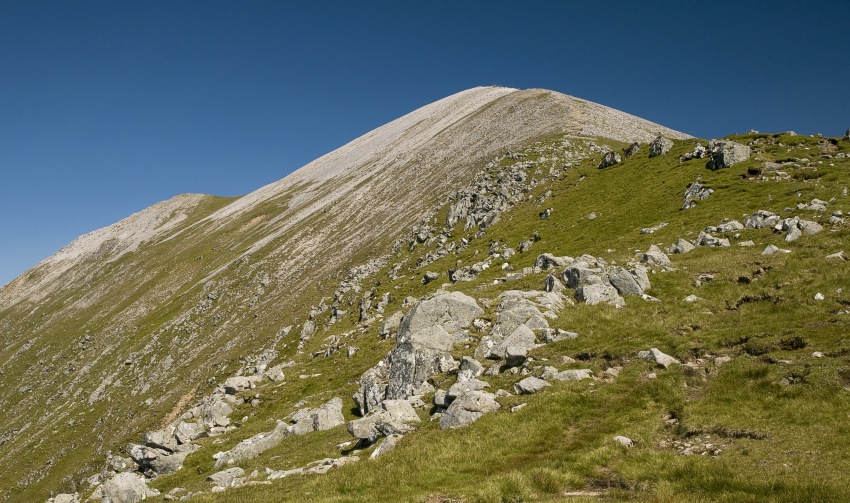 and looking towards sgorr dhonuill 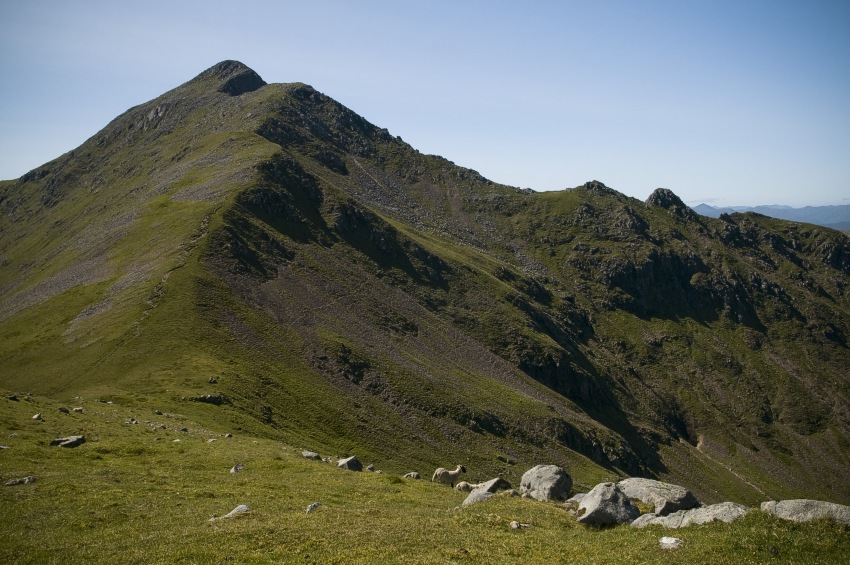 there is about 30 mins walk from the col to the summit of sgorr dhonuill.
the summit is just w wee scramble away! 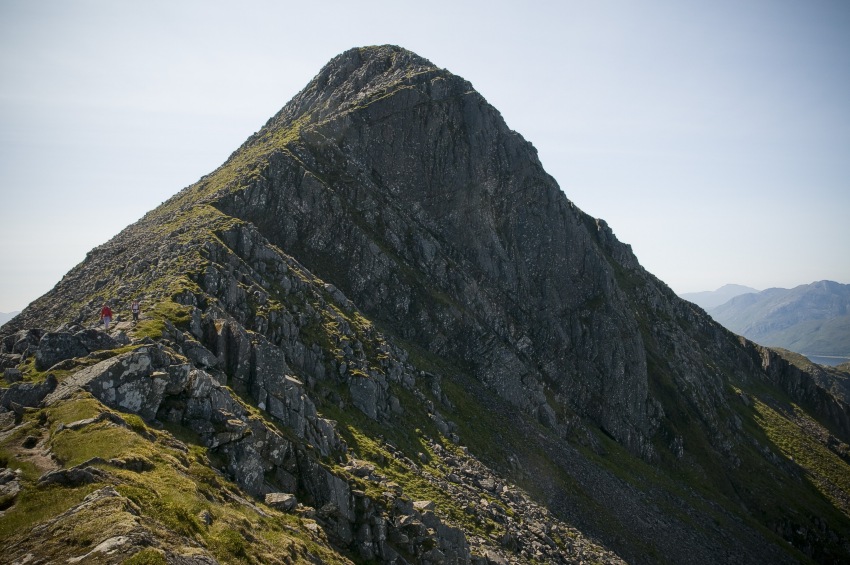 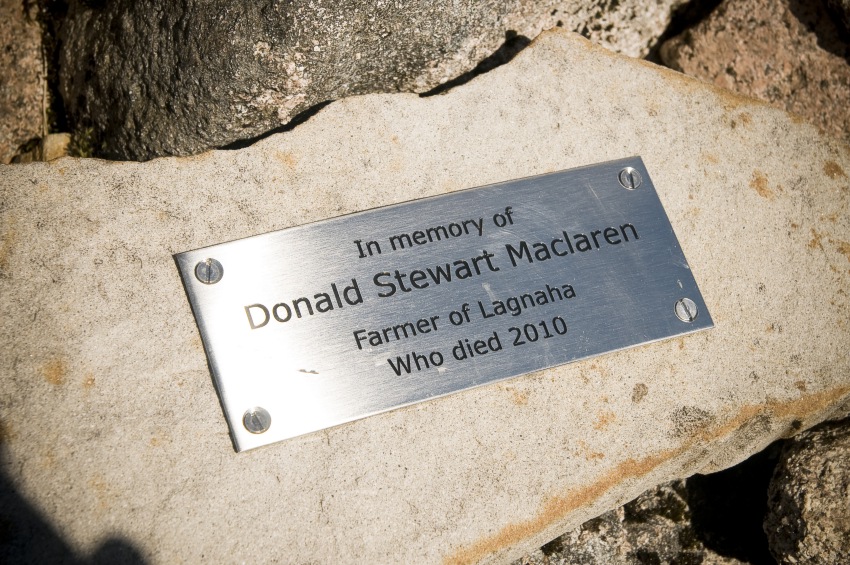 looking back towards sgorr dhearg 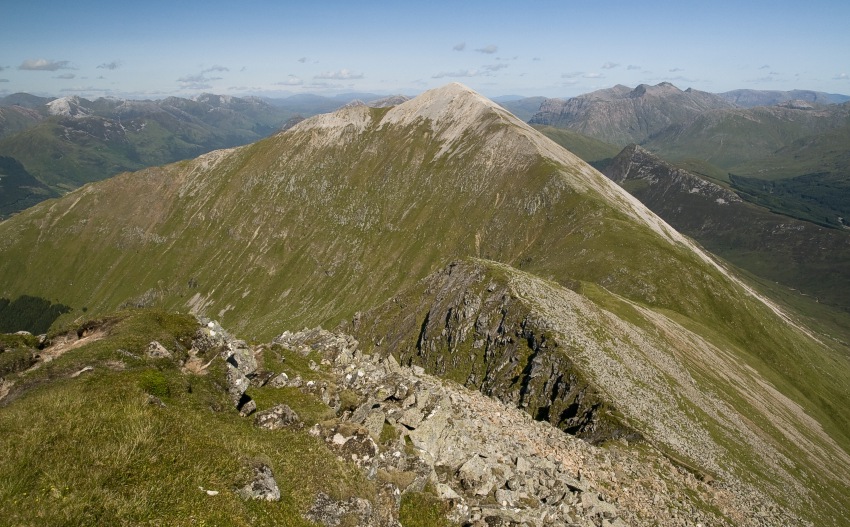 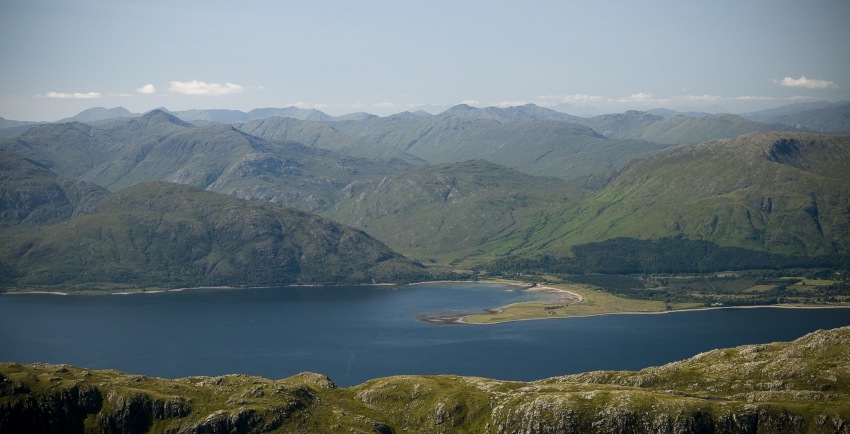 to morvern, lismore and isle of mull 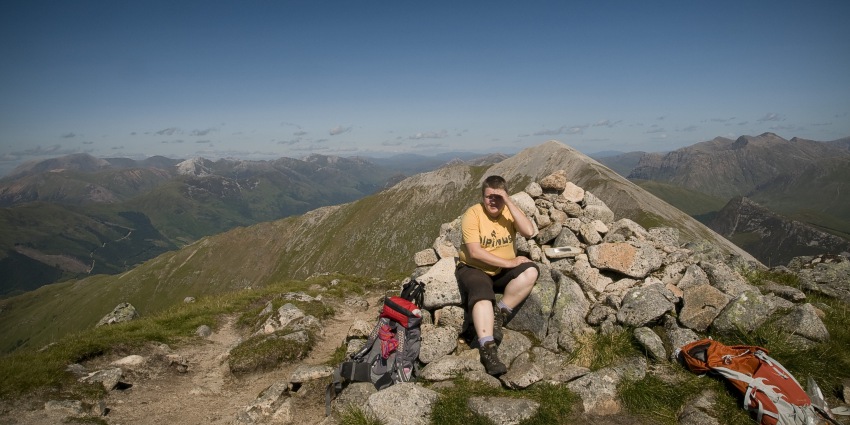 from sgorr dhonuill we walked down to the coll and down to the gleann a'chaolais. the walk down was a long one. at first pretty steep, then pretty boggy. but when we reached the forest the path turned into a great stony track and was really nice. actually in that forest we had the first shade that day, all those hours up the hills we've been frying on the sun

lovely!
we came down to the other car park and from there we would have a loooong walk back to the visitor centre but, it was our lucky day, we got a lift from fellow walkers

amazing photographs blueyed, exceptionally crystal clear, absolutely no haze on the horizon, what kind of camera were you using and did you use a filter? Did this walk excactly 1 year ago and also got a very good day for a brilliant walk, particularly like your photo looking up toards Sgorr Bhan with what i think is the moon? in the background. hi there, the day was truly amazing! yeah, it was a moon. i use nikon d300, i also had a hoya pro polarazing filter, sometimes i put cokin grad grey filter, plus i develop pics from RAW.

Great quality shots there.... Love the one with Bidean - it really shows the bulk of it.

Love this hil. It really is a great day out isn't it. Seeing your pictures, which were superb by the way, makes me think it's time to return

Nice one. great pair of hills. Did this walk a couple of months ago & will defo be doing again some time.

Good for my hill-appetite! Nice photos, Bidean looks impressive, and in the third-to-last picture, the conical hill on the left, middle ground, is another Sgurr Dhomnhuill, the Ardgour Corbett. Different spelling, same Donald, probably.