This was our first outing since we completed the circuit of Munros and Corbetts around The Tarf Hotel.

I had torn rib Tissue while trying to clear blocked drains at home, the injury had got worse over the next few days so I had no option but to pay the Doc a visit. He said 6 weeks would be about the healing time, and that I should take it easy for at least 3 weeks.
So now, with my ribs pretty much as good as new it was time to get ourselves back out to the hills.
4 weeks out does a lot of damage to ones fitness levels, and with our Corsica GR20 trip only a bit more that 2 weeks away panic was starting to set in. (we really needed to get several decent hikes in before then)

Arrived at the car park just before 4pm and were up and going in minutes. Hot sun and Blue skies it sure was looking good. Was much as the weather had forecast for the Saturday, and come the Sunday the forecast predicted poorer weather… again they were spot on.

The plan had been to try and capture the 5 Corbetts and 2 Grahams. But very early into the trip we realised it was going to be a tall order. By the time we approached Assary and had started to climb towards Sgurr a Mheadhain I just knew it was not to be. The hot sun, heavy packs and lack of hill fitness had all ready started to take its toll. We were both struggling and finding it very tough. Wilson and his new mate (bro) Jake were in their element. I forgot to mention Jake; he is a Boarder Collie 8 months old, the new recruit to our gang. As you guessed they were just full of energy. Once we had skirted around Sgurr a Mheadhain we then headed North making for the West top of Rois Beinn from there it was a short walk East to the summit. Views were pretty good, Eigg, Rum and over to Skye. Moidart was not going to disappoint!
All ready behind schedule we needed to push on. Our plans to camp after the 3rd Corbett Sgurr na Ba Glaise were already shelved due to the late start and lack of energy.
We decided to camp at the Bealach An Fhiona, a suitable spot was found on the South side of the drystane dyke, I would have much preferred to be the other side North side but there were no suitable spots. Anyhow tent gets pitched and all our gear organised for our return from An Stac. Sure was a relief to travel this part pack free, as the drop from the Bealach is pretty steep as is the descent from An Stac.
We return to camp from An Stac at 9.30 ish Fed and watered by 10.30, we were sleeping by 11.00 totally knackered. Looking back to the West top from the summit 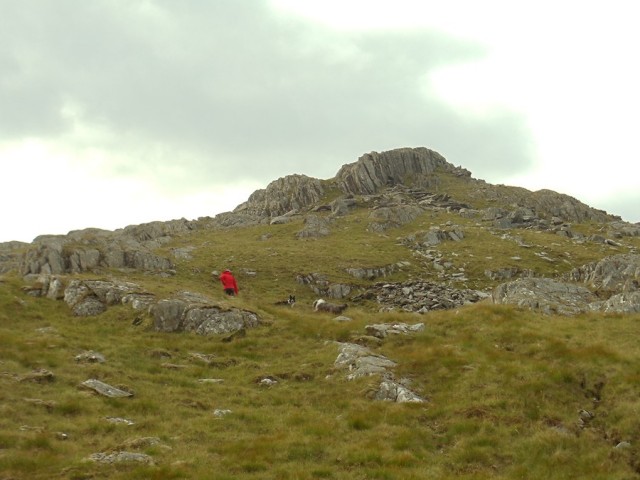 views from An Stac Back to Rois Bheinn Rude rude awakening at 4am, wind like I have never heard and rain to match, it really was outrageous. How the tent never collapsed or shredded I will never know. If a small hole had appeared am sure that would have been it. But no, the trusty Vango spirit 200+ did us proud and held out well against the fierce weather that was thrown at it.
Plan was to be moving by 5.30 ish, but the hellish weather never abated till after 9pm. We slept on and off until then “there was no way I was going out in that”.
What a contrast in conditions we had for today. Wind, rain and more wind rain and poor visibility that would last for the duration. Upon reaching Sgur Na Ba Glaise we needed to decide on changing our plans…. Beinn Mhic Cedidh and Beinn Odhar Bheag was a total NO NO. So on reaching An T-Slat Beinn we descend the NE ridge and head right up the Steep Graham Croit Bheinn. This turned out to be very tough in the wet conditions, also our packs were getting much heavier with all the rain that they were soaking up (to lazy to stop and put on the waterproof covers).
From Croit Bheinn summit we dropped of to the SW heading for the Bealach and from there it was a 4 or 5 km hike to our final hill Beinn Gaire and its many false summits. Glen Moidart from the slopes of Beinn Gaire

Was pretty miserable by the time we arrive at the final summit. More rain and wind, we were soaked to the skin and extremely tired. And to make matters worse there was no food left, the last 8km was going to be a nightmare.
We carry on SW to meet the outbound path at Glenforslan from here its heads down and try to march the final stretch back to the car, just in time to be devoured by the dreaded midge.

So you may ask did we get much out of this trip, were there any positives? Well we increased our fitness levels for our up and coming GR20 trip, Jake (the Boarder Collie) the new Raw recruit did well and we got a right mixed bag of weather.

All in all it was very tough. We were ever so glad to get to our own beds on the Sunday night. Haha.

At least it started out well! Great route, one I've had in mind for some time now, but never got round to.

I ended up in the river Moidart after the Grahams although I didn't choose to ......

haha, Wilson is looking at his younger pal as if to say "yeah, you're having fun now but just wait....."

Top notch effort Dave in the conditions and the circumstances. Some contrast between the 2 days. Good to see Wilson has a new companion, although he appears to be giving him a serious scowl in one picture. And in another one he's looking at Jake with a knowing look, as if to say "I've been doing this for years mate. Stick with me and you'll get used to it eventually!"

Whoa! Quite a trip, good choice for preparing for Corsica, I guess. I have a renewed interest in Ardgour corbetts, and boy o boy, a lot of ascent and descent is involved, much, much more than on nicely aligned munros.

A nice report there Dave. Pity about day two, but an excellent initiation for Jake - agree with all the comments about Wilson's knowing looks

I have sympathy with your rib situation, as I managed to damage mine recently - although I managed to avoid the quack and any reference to recouperation time. I've a couple of WRs to post 'post' injury, but not sure that the White Mounth 5 or a trip to the Glen Dessary 3 is necessarily the best way to recouperate

Even without the other 2 that's a big trip.

Sounds like you caught much heavier weather than us a bit further N.

A look of a prayer being sent? 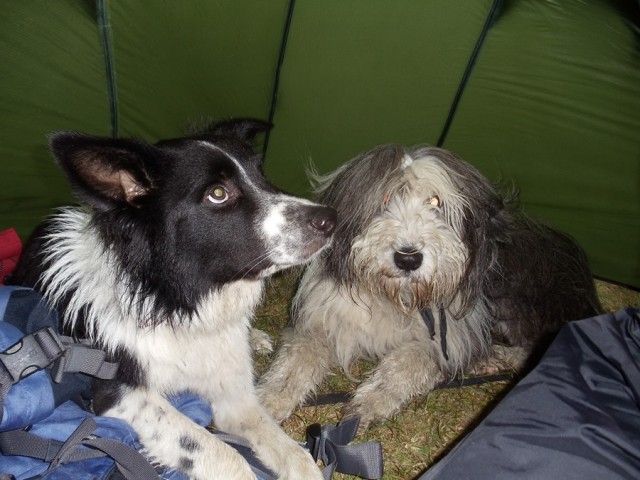 Still a great effort no matter that you had to bail on some hills dave,nice to see a pic of your latest recruit enjoying himself,how does he get on with Wilson