We set off on our pannier-laden bikes from Dalwhinnie on the Friday evening, soon passing the gatehouse (grand but quite pastiche I thought). The track alongside Loch Ericht is very good – I guess it would be, as it leads to Ben Alder Lodge which is owned by a Swiss multi-millionaire. There were several other impressive buildings along the way. We didn't manage to get a good view of Ben Alder Lodge itself when we passed it, as it was well screened by trees. 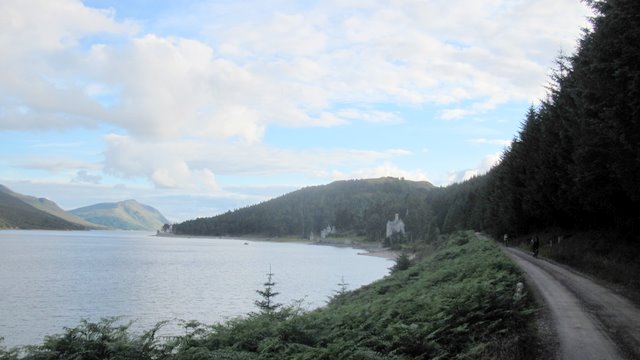 3. Further along the track alongside Loch Ericht 4. Another gatehouse, at the entrance to Ben Alder Lodge

We left the forest and continued up the track in a moorland landscape, and Loch Pattack soon came into view. 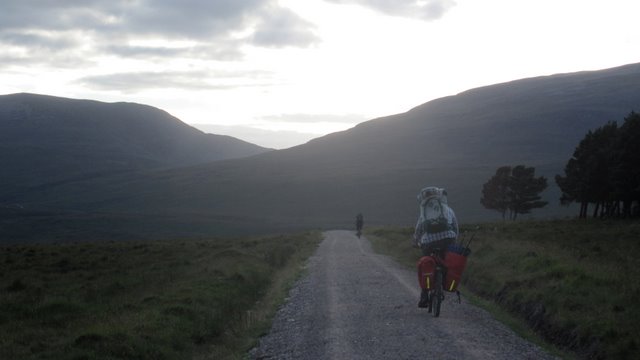 Rather than taking the path to the left as we thought it could be boggy, we continued down to the loch and followed the gravelly and rough track along its shoreline. 6. On the gravelly path beside Loch Pattack

Then came a challenge – the river had to be crossed at either a ford or a shoogly bridge... I opted for the bridge, although someone else kindly carried my bike across – I would no doubt have fallen in if I had attempted it! 7. On the shoogly bridge

Culra was in sight but it was still a long way along the rough track before we would eventually reach the bothy. It is in an awe-inspiring position, below the huge hulk of Ben Alder behind it. 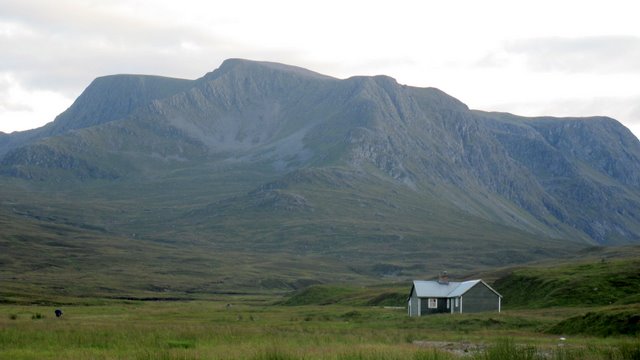 We expected the bothy to be busy, it being a Friday night, but were surprised to find it empty. In fact, only a couple of other walkers arrived later on (having cycled on touring bikes!).


Culra circuit.gpx Open full screen  NB: Walkhighlands is not responsible for the accuracy of gpx files in users posts
After a sleepless night, a midge-ridden call of nature (I now have over 100 midge bites on my legs...) and a quick breakfast, we started ascending northwest towards the ridge of Carn Dearg. The slope was covered in heather and holes, so we went up a gorge but this wasn't much easier.

It was a steep and exhausting pull up, and it was a relief once we reached the ridge which made for easier walking to the first top. 10. From the slopes of Carn Dearg

Continuing west and ascending steeply again, we soon enjoyed good views down to Loch an Sgor and Loch Choire Cheap, both in steep corries. 15. The ridge of Carn Dearg, and Loch an Sgoir 13. Climbing above Loch an Sgoir

The next munro, Gael-Charn, was at the top of a gentle grassy slope. A few grazing deer weren't particularly fazed by us. At the top, we enjoyed views for many miles around. The winding ridge ahead was clear and the drops between each munro appeared quite manageable, which was reassuring. 20. Looking down the glen

After reaching Aonach Beag and continuing along the ridge, we started to consider adding Ben Alder and Beinn Bheoil to the walk (as the weather was good and the forecast for the next day not good). We looked across the glen and considered options for our route of ascent. It appeared that going up from the Bealach Cumhann would be the least steep and most promising option. 21. Looking across the glen towards Ben Alder and Bealach Cumhann

But first, we had to finish the current ridge, and shortly reached the fourth munro of Beinn Eibhinn. Loch Ossian to the west was very picturesque, and it was also very satisfying to look back at the ridge along which we had walked. 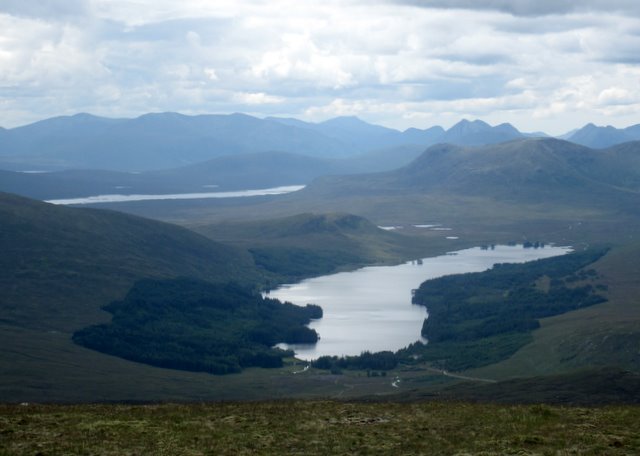 Less satisfying was the fact that my camera now insisted that the fresh batteries I had inserted into it that morning were now dead, and refused to take any more photographs. For the rest of the walk I had to use the camera on my mobile phone – so please excuse the bad pictures!

We returned to the grassy saddle east of Beinn Eibhinn, and then made a fairly steep descent to the valley bottom, before heading up the western lower slopes of Ben Alder from the bealach.
This second half of the walk was very different to the first half in many ways – notably in terms of the weather, as it now started drizzling and low cloud started to set in, making visibility very poor at times. In contrast to the previous ridge, the upper plateau of Ben Alder was very wide and flat. Navigation to the summit was difficult, and we kept on veering to the right towards some rocky outcrops. However eventually we reached the trig point. It clearly had seen better days – it appeared to have been vandalised, with big chunks chipped off it. 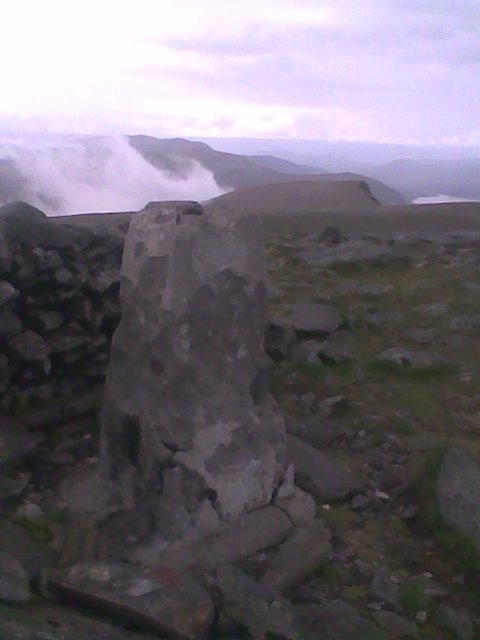 The final munro of the day – Beinn Bheoil – was the other side of the low Bealach Breabag, and it took a long time to make the steep descent to this bealach and then ascend on the other side. The final munro was further than we had initially thought. However, eventually we reached the top. Six munros in one day – woohoo!

We continued down the long ridge towards Sron Dreineach, then veared left to ultimately join the footpath that follows the river down to the bothy. The bridge across the river was further downstream than we had remembered, and we finally arrived back at the bothy at 9pm, 13 hours after the walk began.

Again, only a few people were staying overnight in the bothy, so we had a room to ourselves again and ended the day sharing a miniature of Laphroaig Quarter Cask – it didn't go far between 3 people but was still highly appreciated!

Unsurprisingly, we all slept quite well that night, but occasionally woke to hear continual rain. Although it was still drizzling in the morning, this did not deter the midges which were out in their thousands (millions?) again. After tidying and sweeping up, we pedalled away as quickly as we could to avoid being eaten alive.

This time we opted for the 'shortcut' path south of Loch Pattack – definitely the right decision, as it was much easier than the outward journey despite the path being more like a stream in places. We soon reached the main track and the cycle back to the cars was relatively quick and painless.

A memorable trip, and 6 more munros bagged! (Not that I'm counting...)

. This area is definitely due a revisit from me. Twice up Ben Alder but no views yet!

Funny you should mention pastiche where the gatehouses are concerned. The main lodge burnt down sometime in the past and was re-built based on photos of the original.

As for the trig point, I've noticed a lot more knackered ones over the last 3 or 4 years. Don't think it's vandalism though. Freeze/thaw tends to wreck concrete. Maybe the temperatures have been more varied over the last few years, or more likely, being built at a similar time, they are all reaching the end of their design life at the same time.

Fine report on what is a grand days hillwalking.
Had a very similar trip back in May 2007
Went round the six hills clockwise though

Yes getting a laden bike over the bridge is interesting

Bur see what you've done with your report and pictures? I'm definitely going to have to pay these hills a visit now. Mrs R won't be happy

spent a couple o nights in the bothy 3 years ago and we only did a circular route of Ben Alder. Need to go back soon. I've heard the bothy is haunted too

I never heard anything untoward though. Must've been the wine

Thanks all for your comments; it was a great walk and we were glad that we did all 6 on the Saturday as walking up Ben Alder in the rain on Sunday would have been miserable!

MalkyC - Interesting point about the trig point - I guess that if freeze-thaw can split mountains apart and create scree, it will do some damage to concrete trig points too!

PeteR - Yes, the bothy and hills are definitely worth a visit... perhaps you could take Mrs R?

kev_russ - The ghost must have been using one of the other rooms in the bothy - might have been put off by the overpowering smell of whisky in our room...

Great effort doing these 6 in one day,gives me hope it can be done by me also,but would need to walk in to Culra as I dont have a bike

Top report & a good effort,what a great way to spend a weekend.

Pretty impressive view to wake up to with Ben Alder looming over you.
I'll have to dust me bike off & get some practice in(i'm a very lazy cyclist!)
How long did it take you to bike it from Dalwhinnie to the Culra bothy?
The midges sounded a bit hard work,but aren't they always?

gammy leg walker wrote:Great effort doing these 6 in one day,gives me hope it can be done by me also,but would need to walk in to Culra as I dont have a bike

Yes, the 13 hours included plenty of stops, and one of us suffers from bad knees too, so it's definitely manageable!

Morcambe Monkey wrote:How long did it take you to bike it from Dalwhinnie to the Culra bothy?
The midges sounded a bit hard work,but aren't they always?

It took us 1 hr 45 mins to cycle from Dalwhinnie to the bothy, but that was via the loch route which was slower and more difficult. The shortcut path (as described here http://www.walkhighlands.co.uk/cairngorms/culra.shtml) is quicker, maybe 1 hr 30 mins or so..... although part of it had turned into a stream when we cycled out!

Thanks for pointing out best cycle route.

GLW: I'd def recommend borrowing a bike for these; it's a bit of a trudge to walk into the bothy, esp if you are planning the 6 in a day.

Love this part of the world, been up here many times on the bike and on foot; lots of great wee walks, big walks and bike rides.

Nice report - looks a lovely area - untouched by my hand as yet. Must rectify.

Cheers for the cycle route/time,definately be adding this one to my 'to do' list!

Gable Gable End wrote:GLW: I'd def recommend borrowing a bike for these; it's a bit of a trudge to walk into the bothy, esp if you are planning the 6 in a day.

Hi Stuart,my plan would be walk in to Culra on the Fri night, tackle the 6 on Sat,stay Sat at Culra,then walk back out on Sun

Great report and photos, well done on doing the whole 6, certainly bites into the total, not that I'm counting either.