The final day of our northern Munro adventure dawned. We had camped the night at Scourie in our wonderful camper from
http://www.bigtreecampervans.com/
Highly recommended!

We had taken two days to bag Ben Klibreck and Ben Hope in mixed but generally good weather.

Where to head to now was the question. We had looked at various options and checked out the weather - Beinn Dearg and Cona'Mheall? Quinag? We drove south still unsure where to stop. The weather was glorious, not even a puff of wind. The reflections on the lochs around Kylesku were amazing. 1. Such a still morning

We drove and excitement grew - we could attempt Conival and just see what the ridge was like and then decide whether to try it or not. We were down to one child out of three but he's only 10 and we weren't sure what he would make of it - at least that's what we said!!!

So within 45 minutes of leaving the camp site we were on our way up the track by the Inchnadamph hostel. We made good progress as, although it was warm, the path is clear and not steep at this point. We were overtaken by a chap going much faster than us tho! 3. The bridge to the Traligill caves

We passed the route to the caves which we had visited a couple of years ago - we must have filled them with fear as all he could remember was those are the caves you will never get out of if you fall in! 4. The view up Gleann Dubh towards Conival

The excellent path continues up the glen with much to enjoy along the way. 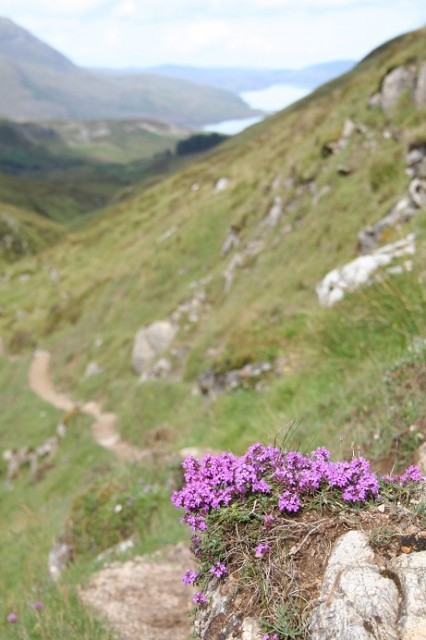 5. The view back towards Loch Assynt 6. Views towards Canisp and Cul Mor start to open up

At this point the path gets a little steeper and there are a few boggy patches. 7. Starting to get steeper

At this point we managed to deviate off the best route. We crossed the stream too early and, although the way was obvious and easily passable, the main route sticks well to the left of the water and only crossed much further up. Route finding much easier on the way down! 8. The route we took

Once we reached the rock band we took a route which appeared as a zig zag much further right of the path. It was shingle but easily dealt with. 9. Passed the rock band into the upper coire

Once we emerged into the upper coire we could see a very obvious path which we joined. As you come out of this section the views really open up across the empty miles of beautiful, empty countryside. There is still quite a way to go to the summit from here, the first part being quite steep which took us by surprise - probably the only down moment of the day. Then it levels out and the rest of the walk to the summit is easy and the views were amazing. 14. View from the summit

There were quite a few pesky midges about so we decided to press and have a look at the ridge. We'd met a chap coming back who said it was rocky but in no sense exposed so we felt our confidence rise. 15. Checking out the ridge We didn't feel the ridge presented us with any difficulty - and we are easily frightened! It needed quite a bit of concentration on where to step because of the rocks but that's all. 17. Looking down on Dubh Loch Mor 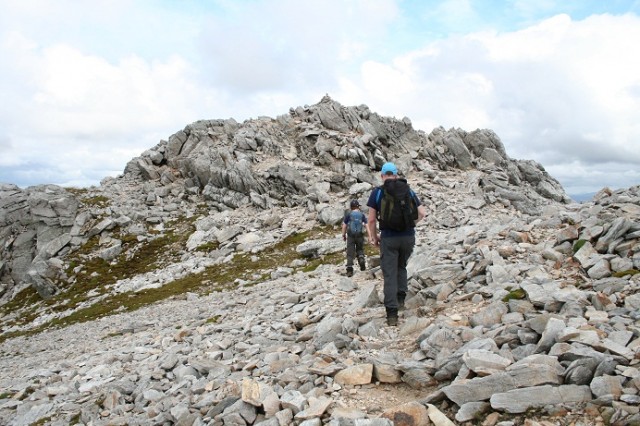 18. The summit of Ben More Assynt in sight

We took some pics and then decided to head back across - too many midges to hang about for long. On the way back we met a guy we had met the previous day who had walked down Ben Hope with us so we had a quick chat. After a quick lunch we made our way back down - following the now obvious path much nearer to the burn and a few metres of easy scramble down the rocks. 21. The cairn that marks the route down the rock band 22. Following the path this time

Looking back you can just about pick out the path. 23. The path down showing whiter An added bonus was the view from the road to Lochinver of both summits. 25. View of Conival with Ben More Assynt ridge behind

And of course pies from the Lochinver larder!

We enjoyed the day so much. The weather was perfect and we had achieved more than we had hoped. The route has so much interest and for us it was a just a little more challenging than our previous walks.
That's the four northern Munros bagged and a fab few days to look back on.

Interested to read your report and view the pics and pleased you all had a great day.Quite an achievement for a 10-year old ,one that he can be very proud of.My best at that age was probably Stanage Edge in the Peak District.I did Conival in 2002 at an age which had 48 added to your youngster's, but never proceeded to BMA which,having read your account of the continuation and seen the photo's,is a matter of some disappointment now.I do recall the steepness of the ascent from the rock band but all in all a friendly route to a worthy peak.Neat word-play for your title.Happy peak-bagging.

Nice report and a great day for doing these 2.

My friend and i did these last year and didnt see a thing due to clag, winds and rain so its nice to see what the hills look like.

We did Hope and Klibreck the day before......Klibreck was so boggy! Was it the same for you?

Well done to the young bagger

We didn't find the walk in to Klibreck too bad altho the middle section of walk in was quite wet. We walked from Strath Vagastie, north of the house, just south of the 182 point on the road. We crossed at an obvious bridge and followed a path round the south of both lochs and then climbed steeply up the hill side to join the path from Cnoc Sgriodain north west of the summit of Carn an Fheidh. On the way down we somehow found hit upon a slightly drier line. The summits of Hope and Klibreck were in cloud and Hope was so windy and cold but the weather on Saturday was awesome - don't think we would have attempted Conival and BMA is the conditions you had.

Just love the scenery so it was fab to see it!!

The Assynt is such a great area so great to see fab reports like this. Had hoped to get up there this summer but we didn't fancy camping give the weather this year & left finding a cottage too late so went down to Northumberland instead. Might have missed a visit to this area but we didn't miss avoiding the midges - must have been bad if they managed to get to the tops!

A very enjoyable report of a couple of great hills. Wish I could get my two lads to get out on the hills when they visit. Your lad di well

Did these two myself in mist, so it's good to see what I missed. It's about time I got myself back there

PeteR wrote:A very enjoyable report of a couple of great hills. Wish I could get my two lads to get out on the hills when they visit. Your lad di well

Did these two myself in mist, so it's good to see what I missed. It's about time I got myself back there

The lad is very keen at the moment and has it all worked out as to how many hills he needs to do each year to bag them all before he is 20..... not sure it will last but we'll make the most of it for now!