I had thought I would be another few months before doing any long walks, we had done a few fairly slow walks while on Skye last months, but my knees had still been locking, not the best thing to happen on top of any hill.
However with my baby brother returning to the UK after years of being away in Asia and Africa he had seen the pictures of us up the Quiraing http://www.walkhighlands.co.uk/Forum/viewtopic.php?f=9&t=12999 and the Old man of Storr and was desperate to do some hills before heading to South America.
After attempting Ben Lawers 2 winters ago and getting thwarted by the snow, I choose to do this hoping it was high enough for my brother but easy enough for my knees.
The 2nd problem was finding a hill that the other half was happy that the dog could do, at 11 months old we were getting conflicting advice that she was still too young, her bones still growing it could cause her damage. Susan having done Beinn Ghlas and Ben Lawers before agreed it should be ok.
So after packing extra water for the dog, dog food, treats, leads and sorting my brother out with clothes we left Paisley at 9.30am, arriving at Ben Lawers car park at 11.30am, the first thing I noticed was the visitors centre has now been flattened, what a shame, the car park was full and there were a lot of families with young children, why these centres don’t survive even if just in the summer months baffles me.
The 2nd thing I saw was Beinn Ghlas, having no view of it on my previous visit, I was getting more apprehensive, how will I manage this? Off we set, letting the dog run free in the nature reserve playing with another dog already. At the end of the enclosed nature reserve she went back on her extendable lead which was attached to my rucksack belt. There were a few sheep dotted around, a good few hundred metres away, but she’s not trusted enough to ignore them yet.
Cailloch (the dog) was determined to catch my brother up who was setting a blistering pace. I could hardly keep up. Change of plan, I told him to go left along the bypass path. Good decision, he kept a fast pace which I was getting used to, but he never stopped to enjoy the views, which I wasn’t used to. We were behind Ben Ghlas before he stopped and I got time to get my camera out.
We headed up to the ridge and had Lunch before the final ascent of Ben Lawers, the sun was shining but the wind was very gusty, by now my brother had every layer of clothes on, hat and gloves, and still moaning about the temp. Until then I had been in a t-shirt, must be hotter in Tanzania or something?
Final ascent up the very busy path, unclipped the dog lead from the rucksack to try and stop her bounding up, down, left and right. A few people saying I was cheating getting pulled up the hill, which was true to some extent, but also getting pulled in the opposite direction as she zig zaged up.
At the top and a few quick pics before heading down and along to Ghlas, If I thought the ascent had been quick, been pulled off the summit speeds up the decent. We got to the ridge where the dog had a wee swim in the rather large puddle? I turned to see my brother was only half way down, I had a small smile, at least I was quicker on the downs.
Along the ridge to the summit of Beinn Ghlas, this is where the dog started to enjoy herself, another walker said there were no sheep on the decent she got off the lead, I was getting tired of being pulled down the hill anyway. Off she went, up and down the hill, running back to see what was keeping my brother, fear of falling on his but probably. We made it all the way down and back to the car just after 3pm. Great day, great weather and my knee held up.
As I started the car to head home I had another smile, brother and dog fast asleep. So maybe I’m not as unfit as I thought. 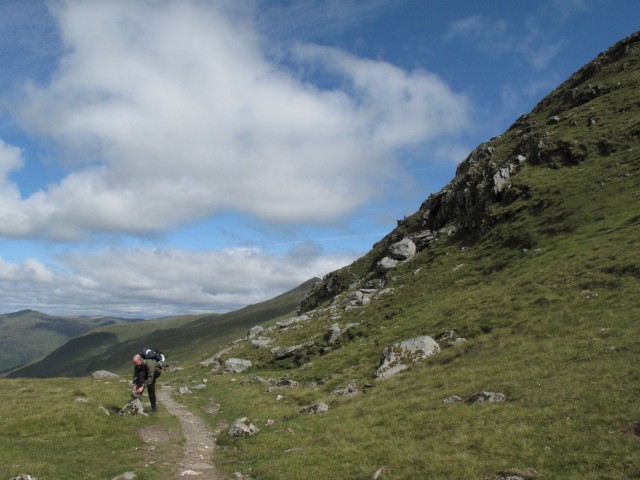 Dog always wnting to be with his uncle 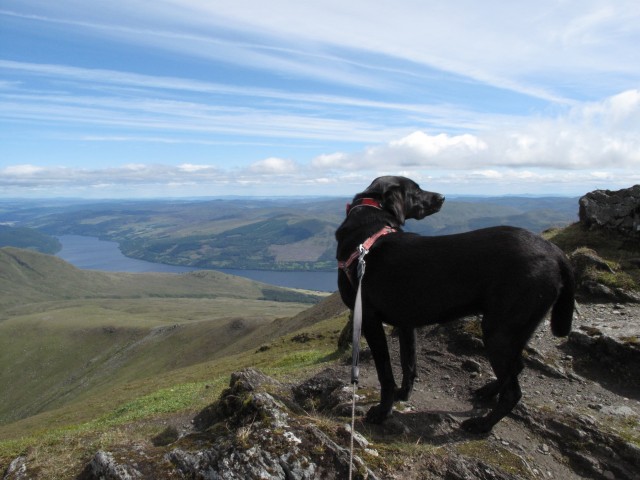 Cailloch at top of Ben Lawers 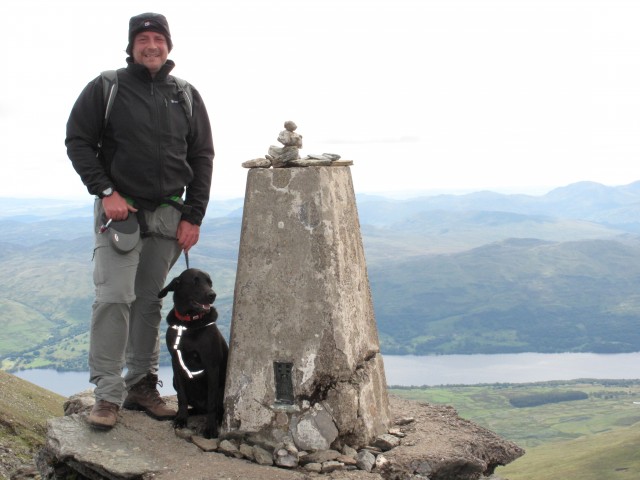 Still grumping about the cold Good to see you back out on the hills again

Loved your report Allan. Well done get out again and having such a smashing day. A dog pulling you up a hill??? Yes that is cheating but you may have found a gap in the market!!! How much does doggy renting cost???

Now there is an idea, one which with a quick google search is already being done. The only down side is she pulls you down the hill as well

It is something she would love though since a young 6 week old puppy she has spent the day with loads of people as we didnt want to leave her in the house herself, now she thinks family and friends houses are hers as well, she would just think she has even more people to take her for a walk

Got the bug again after a relativley pain free walk, so just a few more "easy" Munro's and then should be back into the swing of things, now just for the rain to ease of a bit.....

alan s wrote:Good to see you back out on the hills again

Agree whole hearted with this coment,welcome back,and a fine report on your return,nice to see
your new 4 legged friend enjoying it too

alan s wrote:Good to see you back out on the hills again

Agree whole hearted with this coment,welcome back,and a fine report on your return,nice to see
your new 4 legged friend enjoying it too

Thankyou both, you dont relise how much you miss it until you start again, next time though it will be at my own slow pace, Im sitting here with aching muscles that I didnt know I had

Good to get the mojo back eh?