Got a few days off on holiday this week so thought I'd have a go at my first ever Munro bag during the week outing.

And for that decided on having a go at:

Drove up to Invervar and parked car beside Phone box as suggested in route. Couldn't see anywhere else to park, especially as sign in front of houses said was for residents only. They'd obviously been having problems with walkers using their spaces!

Now is it just me, but has anyone else found the start of this one hard to find? I wasn't sure if it was up the long drive of the house, the houses to the left, but then finally realised it was the hardly noticeable bit to the side of the run down garage! Weird, and not exactly a stunning start from me!

Still looked like I was going to have the entire range to myself today as no other cars about, a first for me!

Up through the forest and through two big metal gates, there is stiles to cross but it was just as easy opening and shutting the gates as not exactly small stiles!

Head left along path, which skirts forest and then heads for Carn Gorm. Route recommends following path right alongside side of forest and up ridge of Meall Garbh, me I was enjoying the views up the stream so headed up a bit longer and then attacked the flank of Carn Gorm and picked the path up higher up.

Mist started to roll in now so all views disappearing rapidly! Then the wind started up, and then the rain! Is this really supposed to be July? Ah well on with the waterproofs again!

Path zig zags a wee bit to the top of Carn Gorm, fair few false summits heading up here, thought I'd never hit the top, where there's a bit of shelter from the wind, with a collapsed trig point. Path very handy up here as visibility down to 10-20 metres, grrr no views from top, always a shame!

Still, time to bash on as no point sitting about moaning, better just to get cracking. Next bit is a ridge walk, that can if desired take in An Sgorr, but there's a few paths along here with one that winds along the back of An Sgorr. Me I thought it was going to be four summits today, no point wasting energy that may come in handy later on.

To get to Meall Garbh is pretty straightforward, there's a line of broken down fence posts through some bouldery bits with not that much ascent as the hard ascending has been done already to get up Carn Gorm.

Bit of an 'art' structure further up as someone has gathered up various posts and stones and made into a very weird bonfire/pyramid thingummie. OK, someone had too much time on their hands methinks. Me I was up for battering on as conditions were to be blunt, pants! Still was only two hours into trip so was quite pleased that was able to batter on without lungs and heart bursting out of my chest. Had been feeling pretty rough as well, as had eaten something well dodgy day before and was rather dehydrated and lacking in oomph.

Mist clears for a second or two here as working across Meall a Bharr to get to Carn Mairg so start to see some views up north. Wait is that Schiehallion to the North? Rather stunning it is too, and not that far off. Weird how starting to piece together now how all the hills 'fit together' in the landscape, something else to enjoy about hillwalking.

After Carn Mairg its across to Meall Liath, which is a bit craggy to say the least. Vision was minimal again, so was a VERY careful pick way down the exact way to the side, as if hadn't been careful could have went off some steep cliffs. Reckon this bit could easily be avoided by cutting down side of Carn Mairg and heading direct to Meal nan Eighann, but was following route so stuck with it, as was keeping me right in poor visibility.

Now at this point legs started to get really blooming fatigued. Was only four hours in, and haven't had this problem before, but my pace dropped something rotten. Rain was still battering down so no danger waterproofs were coming off yet, would have liked to, but no way.

Stopped a couple of times for a hot drink and some food to try and gee myself up but wisnae happening, still trudging, still at least was still moving.

Thankfully on way up Meal nan Eighann, mist cleared and sun for about oh 2 seconds, so waterproof trousers off in a flash and felt a lot less sluggish.

Wee bit of back and froing to do do craggy summit of Meal nan Eighann, and then across to other high point, before starting route back down. Had a wee bit of a 'mare finding way here, couldn't see a good path to take so was all over the hill finding it. Still eventually picked it out and then its a long walk back down to the forest.

Its long flattish bits, broken up with steepish drops that drop a fair bit of height quickly. Views are great here as you can see the entire route you've just been across, and is really rather spectacular to see a big horseshoe of a walk, that looks a lot longer than it felt at the time. Stunning peaks. Still not seeing anyone else on the entire range, is during the week walking always like this? Was rather special to have had it all to myself.

Also great views across to the Ben Lawers range as well, looks rather inviting!

Weather improves rapidly during the ascent so rest of warm clothing gets ditched, and back down to t-shirt and unzip lower part of trousers as was that warm, bizarre conditions!

Back down to forest and rejoin route took up hill,and short walk back to car for journey home.

All in all, hard rewarding walk, made even more special as was only one on range that day.

Was up there at the weekend but just did Carn Mairg and Meall na Aighean, saving the other two for another day. Just past the telephone box there's a lane on the right (if you're coming from Ben Lawers visitor centre) that takes you down to a car park. It's got room for about seven or eight cars. There's a notice board in there with route details and information on Deer Stalking times etc. Don't worry, I missed it the first time I went up there.

In fact, my little dog and I startled a hundred or so deer in the valley that Carn Mairg bends round. In a couple of minutes they'd come together and ran off over the ridge. Ahhh.... if I could climb the hills like they do! 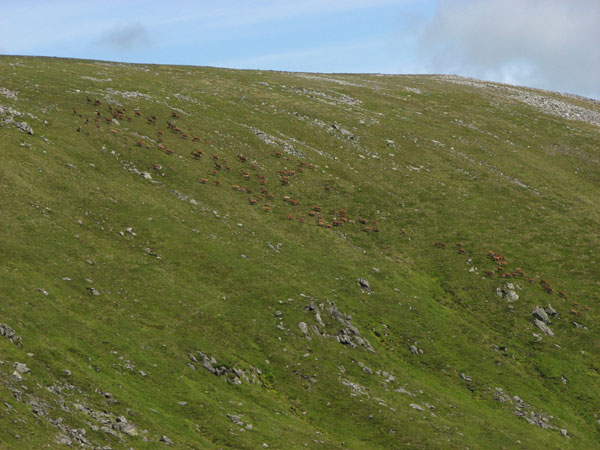 Sorry for the poor quality of the shot there!

Nice day though, lucky bagged her first munros. She looks quite pleased... The mountain to the North would have been Schiehallion - I remember looking at the (misted/cloudy) Carn Mairg range when we were up there - maybe it never gets good weather?

I've had quite a few days (usually in those conditions too) where I've felt truly awful too but by the next day (usually in better conditions) where I feel great again. Maybe it's being too hot swathed in all the waterproofs or something. I think also in my case it's that I get a bit stressed in thick mist on featureless ground and that saps my energy. I can navigate fairly well but it's a confidence thing - I'm usually in the right place but always worrying in case I'm not! You made a great time for someone feeling rough!

Looking at the maps and the pics in the Munro book, it always looks to me like you're best to include the 'top' to the east of Carn Mairg and that way have a gentle grass slope directly south to the final Munro. Anyone done that and know if that's correct?

good report there
i did this in march and enjoyed it but the weather wasnt great
it took us around 7 hours but the snow made it hard going.
i to missed the car park behind the phone box but my excuse was it was still dark

it wasnt until we returned and seen the other cars there that i noticed.i was parked around 300 mtrs to the west.i didnt mention this in my report thinking i would look stupid but im glad im not the only one

i did this with a member from this site in Jan over two walks on started at the meall nan aighean side then 60m from meall garbh blizard and white-out we got out of there, returned to finish the job week after this time coming in from the Carn gorm side and one we got to Carn gorm summit blizzard and white out again. never got meall garbh!!!!!

probably going to tackle this lot on Sunday if anyone fancies it!