I`d not been out for 7 weeks , so despite the poor forecast for Saturday 13/8 i was determined to get out as Sunday 14/8 was already booked up. As usual i was accompanied by Oskar , gear all packed , piece made , flask filled & we were off from home just before 7am. A quick stop for a take away coffee in Callander then onwards to park at the Lawers Hotel , boots on then we hit the road 830ish.

Looking from Lawers Hotel car park towards Meall Greigh......ominous eh !!
It was quite warm , and dry at this point too

, a wee walk along the road then turn left at the horn carvers studio up the farm lane , i took the route as described here on Walkhighlands. Onwards through the trees - this was quite wet the area being over run with ferns which over grew the path/track & over 2 stiles before coming onto the start of the open hill.

But much clearer over Loch Tay
It was a long continous ,uphill slog in poor visibilty to Meall Greigh , as i go to the top the wind picked up a lot adding some zest to the now driving rain.

Oskar protesting in the wind on Meall Greigh.
The visibility cleared slightly as i made my way down from Meall Greigh towards Meall Garbh,but it wasn`t fantastic at all

Closing in along the ridge towards Meall Garbh.
The wind had lessened a wee bit , but the rain never really let up all day , although it lessened a lot on the way out.
I didn`t hang about on the summits - just a quick photo with Oskar then moving on.

Oskar on Meall Garbh.......... in the rain
I`d seen photos online of An Stuc & had talked to folk who`d been there , however i wasn`t able to fully appreciate how it looked because of the clag. I took 4 photos of it , but they weren`t really clear & approaching the hill it was obscured quite a lot. Actually getting to the top was MUCH easier than i thought it would be & Oskar managed fine - without any help from me at all.

The clearest of my photos showing An Stuc hiding.

An Stuc summit photo of Oskar , he`s really quite happy as he knows lunch is next-he`s just looking sad for the camera
Exiting An Stuc the cloud did begin to lift & the rain eased mostly for the rest of the day .
I made my way down at Bealach Dubh & sat amoungst the rocks , taking my 1st real break since starting. The rain was now off

& Oskar & i were sharing our piece , my coffee was trully wonderfull.

View from my luch stop below Bealach Dubh.

Lunch view again over Lochan nan Cat.
After this we headed down towards Lochan nan Cat moving carefully through the flooded heather/ bog/ moorland/mosses .The water wasn`t quite of biblical proportions but i would have been better off with webbed feet or a pair of flippers , neither of which i had in my rucksack. My boots were wringing

I took a few photos on the way out as it had now cleared up , i saw a group of maybe 4/5/6 folk heading for An Stuc from Ben Lawers. They were silhoueted against the sky as they made their way down to the bealach. 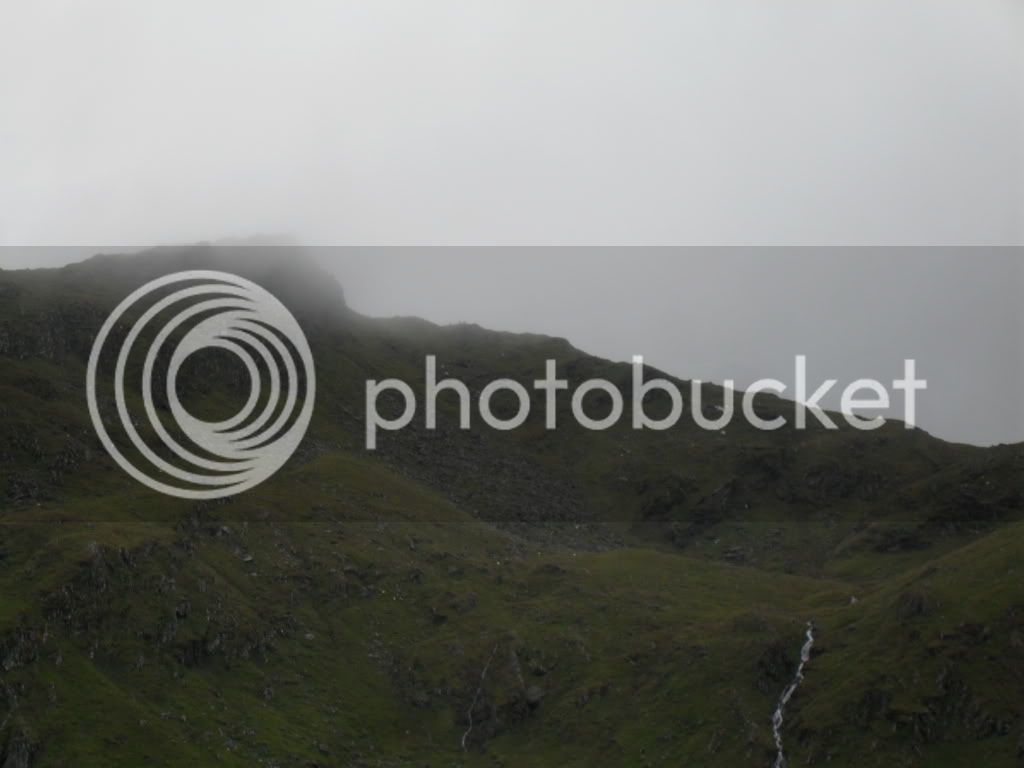 Group of walkers/climbers on ridge just left of centre.

A last look back before plodding out.

Looking over Lawers Burn toeards Meall Greigh on the way out.

Taken from the same spot looking to Loch Tay.
After this photo we made our way down crossed the burn at the foot bridge and rejoined the outbound route back via the fern lined path amounst the trees, then a short distance to the hotel.

Last photo looking back towards an ever clearing Meall Greigh
Once at the hotel i changed ,delighting in a pair of dry socks & training shoes (adidas samba - old school me )

i had a good venison burger and a very well deserved pint before heading home. Oskar enjoyed a rub with a towel and a biscuit. Although some of the fabulous views were robbed from me by the cloud i had a thoroughly enjoyable day on the hills after a work enforced break , and my legs didn`t protest too much today either

Good effort there steve and nice pics. ive done both Greigh and Garbh twice in opposite directions in pretty much the same weather without hitting An Stuc. 3rd time lucky next time though!