We all have key moments in our lives; sometimes you recognise these as they happen, but sometimes it's only with the benefit of hindsight that you realise the importance of an occasion.

At the time, my first munro didn't really register. My old man was a keen climber back in the early sixties. As you look back at his battered copy of Munro's Tables (published 1953) and read through the scrawled dates next to the mountains, you realise how much fatherhood effectively ended his climbing career.

From 1961 until 1965, he clocked up 50-odd Munros, mostly without the aid of a car. Most were bagged using the train, before Beeching's Axe fell. Although far more serious to his ambitions was the birth of my older brother Chris on Hogmanay 1965. I followed on in 1967 and by 1972 there were four large boys to occupy his time. My old man has made it up a few munros since the 60's, but they are few and far between. I always knew he loved being outdoors, expecially in winter time. Occasionally, he'd embarrass the hell out of us by turning up at primary school to take us to a doctor's appointment wearing plus fours, white woolly knee length socks, a deer skin jerkin and a red woolly hat that would not have looked out of place on Tom Weir.

So, when he ushered me and my 2 younger brothers into the car and drove us off to Blair Atholl one sunny-ish Saturday afternoon, I had not the slightest inkling of where this would eventually end up. My old man is a great believer in putting the idea out there without forcing anyone to do anything. Shortly after my elder son Tom was born, we gave Sally some space and took ourseves off to the Gallery of Modern Art to see a Richard Long retrospective. Whilst we could have spent hours there, imparting the greater meaning of the work to a frankly bemused boy, his angle was that just by being there and showing him that it was normal and acceptable to go to art galleries, you were at least sowing the seed that this might be something Tom would later gravitate towards. And so it was with hills. Whilst I'd never been one of these teenagers you see, sulking up a hill, head bowed as their parents storm off ahead and then turn in frustration that their offspring could dare to be more interested in punk rock / Sega mega drives / the latest horror movie* (*Delete as appropriate) than the good, wholesome exercise of traipsing up a hill with their deeply uncool parents, clad in deeply uncool manmade fibres whilst being frozen and windblasted into the bargain. 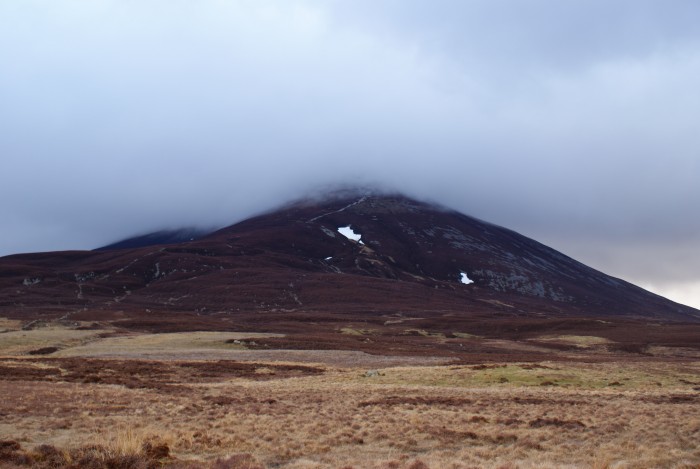 I remember the walk in - going back years later to nail the other summits of Beinn a Ghlo, I was surprised at how short the walk along the metalled road is. Like everything from childhood, it was always sunnier summers, bigger gardens, etc etc. It seems odd that of my two abiding memories, that the road to the foot of the climb is so strong. It's hardly a memorable road; but I clearly remember thinking the walk back was endless. I think more than anything I took from it the notion that even though you were off the hill, you may have some walking still to do. See Aonach Eagach, any of the 3 munro expeditions in Torridon, SGSR, Glen Strathfarrar - the list goes on - it does become a recurring theme in Scottish mountaineering.

The other thing I clearly remember is the sense of space you got from the top. All the ground to the south is fairly flat, until you get to Ben Vrackie or Ben Vuirich. And as for over the back - nothing that man has touched is visible. Now, I grew up on a hillside in West Perthshire, where the nearest neighbour was over half a mile away, and there weren't many more within a mile, so for me to think this was remote when my idea of remote was already fairly acute, gives you an idea of the impact this left on me.

Sure, I remember stopping at regular intervals, pausing for breath, waiting for Martin (only 13 at the time) and the old man to catch up, it was hard going, but not massively so. And it was hot. Very hot.

I've been back twice since. Once, I went to visit a former colleague from my time in Hong Kong who lives in Blair Atholl; I left Edinburgh on an April Tuesday evening with the express intention of drinking copious amounts of whisky and reminising about the crazy japes we had as white van men in Kowloon. He wasn't going to be in until after eight, so I wandered up on a very pleasant evening as the sun set; all clear skies and slightly cool. And again to complete the hill a couple of years later in knee deep snow, but that's another story. For now, every time I head to Orkney or off into the far North West in search of more hill action, I have a quiet wistful sigh at my first munro which comes into view as you climb up from Loch Faskally on the A9 onto the dual carraigeway that spins you on towards Blair Atholl. It's a very life affirming moment that has diminshed none in the interveening years. Me slumped over the trig point on top of Carn Liath; the old man baring his chest and Martin looking knackered.