4 at Glenshee - NOT Glas Maol Circuit (didn't link to that)

4 at Glenshee - NOT Glas Maol Circuit (didn't link to that)


Decided to head out early on a Wednesday that looked to be the best day so far of my time off to walk a circular route taking in four Munros at Glenshee. My brother took a day off work and decided to come with me (and drive which was a bonus) on my last outing of the summer. I had only been to Glenshee once before and that was in winter while still in primary school so was quite surprised at how little time it took to get there (even after getting briefly lost in the sprawling conurbation that is Kirriemuir!). Just over an hour and a half after being picked up we were parked in the un-signposted car park 2km to the north of the Glenshee ski centre on the west side of the road. Immediately upon the doors opening the ravening swarms of midges descended and didn't leave us until we climbed up on to the shoulder of Carn an Tuirc. A quick walk a few yards up the road and we crossed the river via the road bridge and headed up the public footpath towards the first Munro of the day. 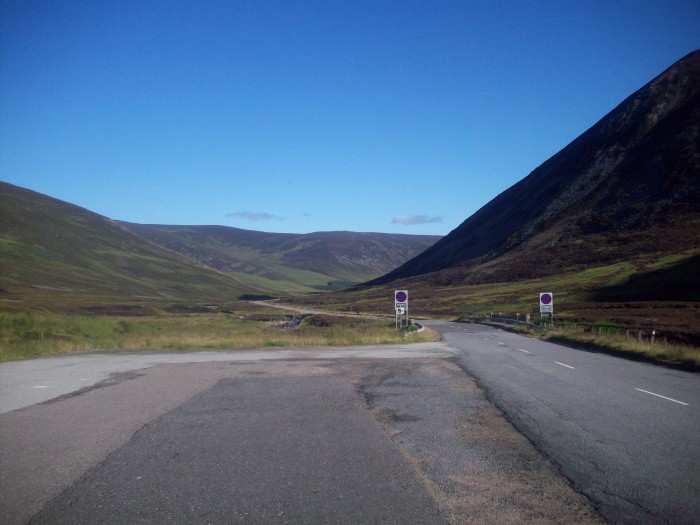 Not the most picturesque start to a walk - the road bridge

Within yards of leaving the tamac the wet, boggy ground that was to characterise the day made its first appearance with my right boot disappearing beneath the mud - thankfully only a little trickle got in over the top but it was enough to convince me that gaiters might be on the cards as my next purchase when wandering acquisitively round an outdoor shop.
The weather was gorgeous as we reached the burn and turned east to follow it up towards Carn an Tuirc. The path alongside the burn was generally well defined but very boggy in places. It was concentrating on the wet ground that perhaps led to me missing the point where the path breaks more north easterly to head up to the north of the summit. Instead we continued up the fairly well defined path that headed straight up the side of the mountain. I knew from reading route description that we should be skirting to the north of the boulder fields that were starting to appear ahead of us. A quick stop to consult the map and two decisions were made; the first was to cut back across and down the slope to pick up a path to take us north-east rather than straight up, the second was that my next trousers would have a thigh pocket big enough to take a map so consulting it didn't mean taking it out of my bag every time. The pause did allow a chance to take in the view that was starting to open out for us (and let the sweat clear out of our eyes - fairly steep climb straight up under blinding sunshine). 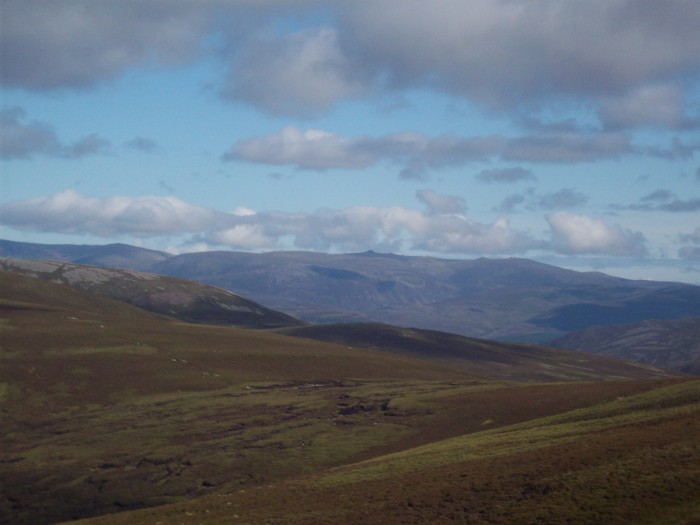 The view off towards Lochnagar

Heading around to the north of the summit we soon picked up the well used track and quickly reached the ruins of the hut that marked the end of the path. Just after that we headed south up the side of the watercourse and after a short sharp climb reached the boulder strewn summit. The view to the south revealed the grassy slopes of Garbh-choire and sight of the next Munro. 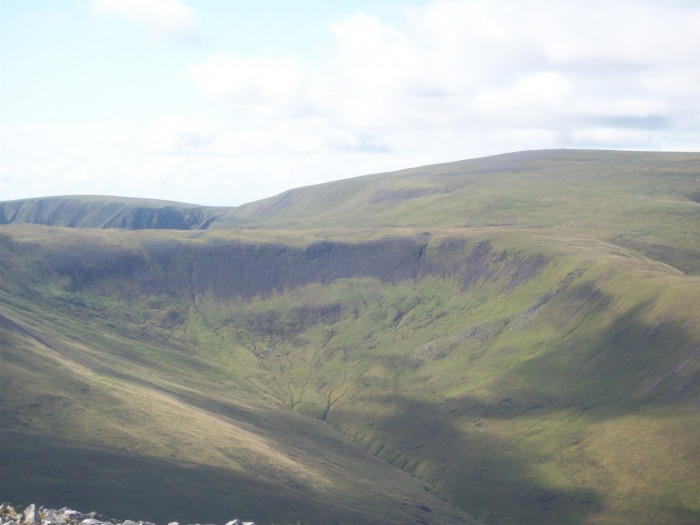 It was also an opportunity to give my brother a quick refresher on using a map and compass as the next cairn was clearly visible silhouetted to the south-east. 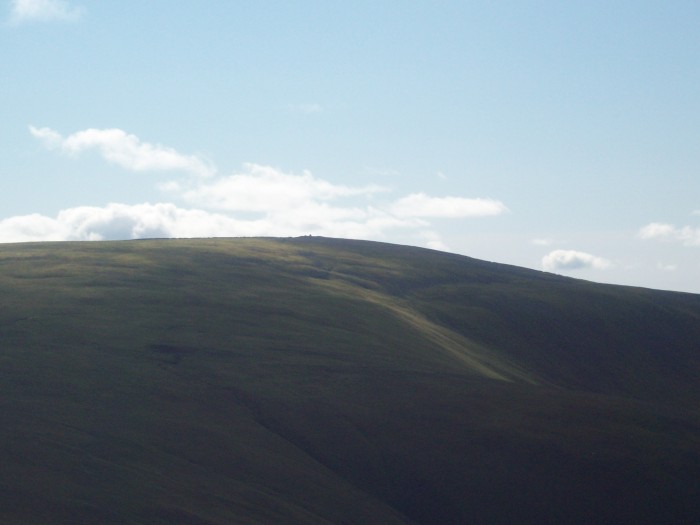 Cairn of Claise from Carn an Tuirc

After sorting out his 180 degree issue we head off almost directly east and picked up the path that took us down to follow the track evidently used by vehicles that led us by a gentle stroll up to the summit of Cairn of Claise. The view to the south opened up giving a fine sight of the craggy head of Caenlochan Glen. 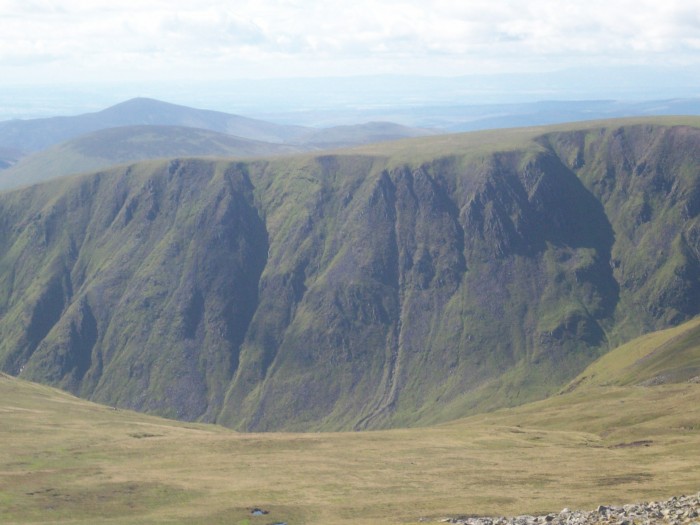 At this point we saw our first other walkers of the day approaching from the south east - two of them with a dog. We decided to leave the summit so they'd have the place to themselves when they reached it. We headed off across country and descended down into the bogs that fill the whole area between Cairn of Claise, Tolmount and Tom Buidhe. A winding fairly circuitous route led us to the ascent up to the summit of Tolmount (and my tenth Munro!). 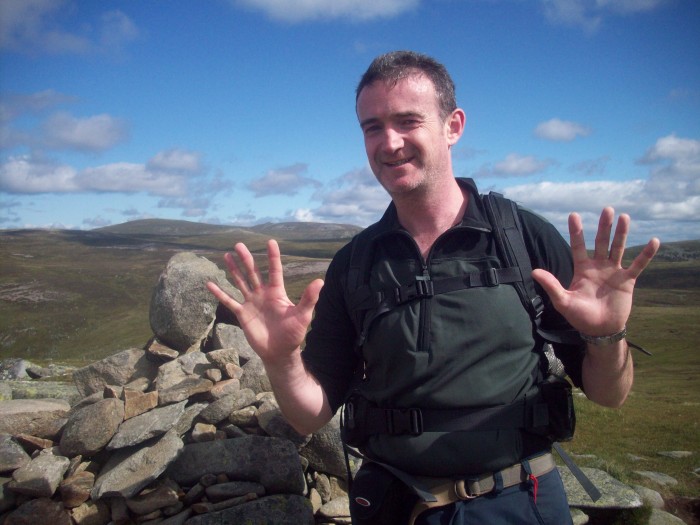 That'll be number 10 then

As it was still morning we decided to take in Tom Buidhe before lunch. We headed back down the path, got nice and muddy in the boggy valley between the Munros and headed up between Ca Whims and Tom Buidhe before turning east to take in the easy ascent to the summit. Four Munros before lunch about three and a half hours after pulling into the car park was a decent morning!
After lunch we headed back towards Cairn of Claise via Ca Whims and followed a fairly distinct path through the boggy ground. It kept us fairly dry but there were some impressive leg breaking holes hidden in the thick undergrowth. We traversed around the soouth east of Cairn of Claise around the recommended 970m mark then cut down and rejoined the path that would would take us around the top of Garbh-choire and to the route down. Looking back towards Cairn of Claise we saw our second group of walkers for the day - three tiny figures heading up towards the summit.
The general lack of people was surprising but I suppose it was a Wednesday and the schools had just gone back. Other life had been quite in evidence throughout the day with sheep to the north, mountain hares in abundance, grouse everywhere and even a few amphibians lurking about. 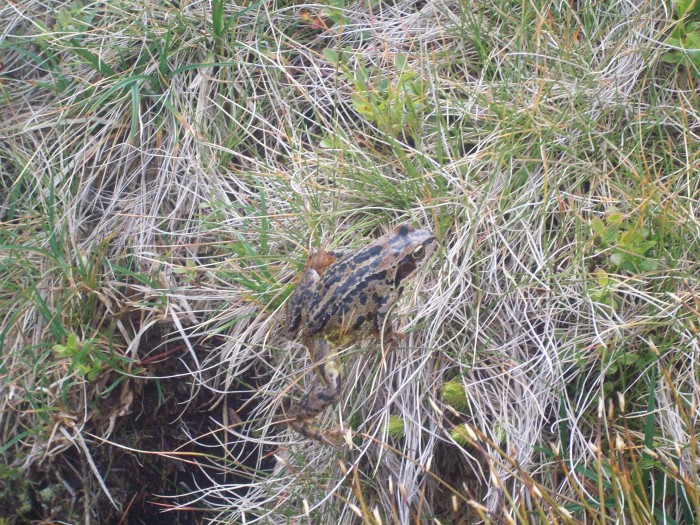 The route down took us along the top of the broad grassy ridge towards the rocky outcrop of Sron na Gaoithe before dropping steeply off to the right of the sharply defined summit. 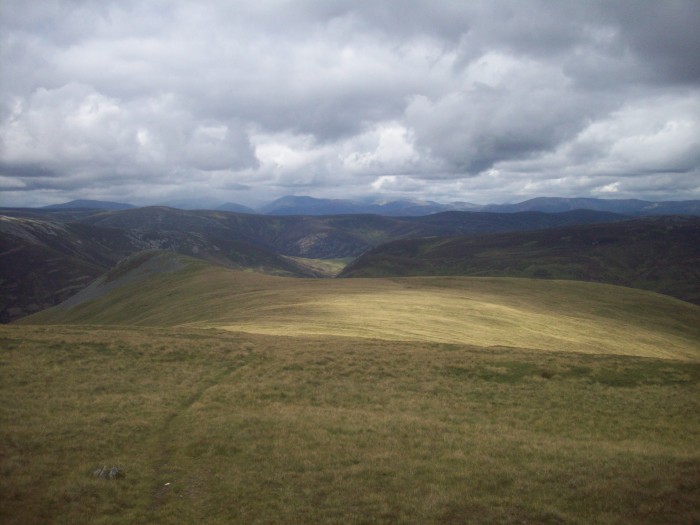 Strolling along before the steeper descent allowed a nice view of the first Munro of the day and a clearer idea of why it was more politic to go around to the northern side to avoid the fairly steep boulder fields that a more direct approach involves. 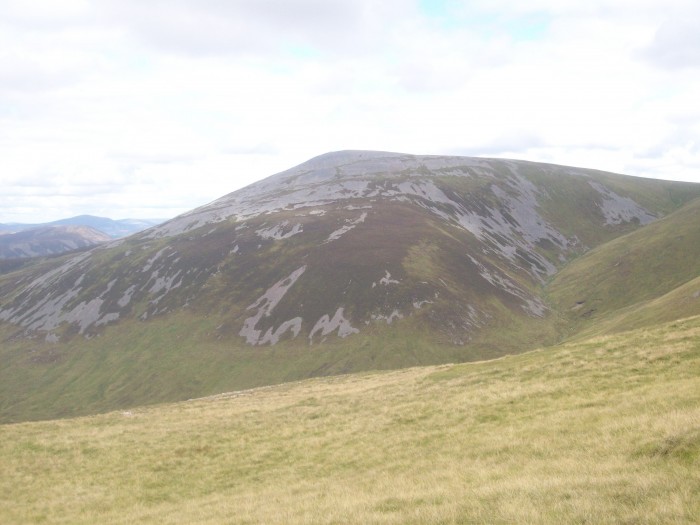 Carn an Tuirc from the south

At the top of the steep slope where the path disappeared it was possible to look down to the footbridges near the start of the route and see where four cars were now parked on the east side of the road. Parking there would have shaved about 1km off the total route but we didn't really begrudge the last easy 500m along the tarmac to stretch out after the steep descent into the valley. A good day with lovely weather and a nice end to the summer's walking. We headed back taking the northerly route through Braemar and Ballater so we could avoid the metropolis of Kirriemuir and its unannounced road closures that had thrown us off en-route. There was some satisfaction in just pulling out of the car park as a tiny wee shower passed leaving us warm and dry with the walking already done by mid-afternoon.