An evening excursion to Creag a'Chliabhain

An evening excursion to Creag a'Chliabhain

Most of the Sub 2000 foot Marilyns in Strathnairn and Stratherrick have provided fun excursions on the bike after work over the last four years. I now only had two left, and Meall an Tarsaid was clearly too far away to reach in the window of time I had available. Therefore, I decided to go for Creag a Chliabhain, possibly ascending Beinn Dubhcharaidh as well if time and weather allowed. Wednesday seemed to offer the best weather in the forecast, but despite starting well, it settled down to overcast with showers as the day went on.

Creag a'Chliabhain.gpx Open full screen  NB: Walkhighlands is not responsible for the accuracy of gpx files in users posts
I left work at 5:30 on the dot, knowing I had a long way to cycle. The road down to Dores is quite annoying, as you always seem to be going uphill, despite never getting to the top of anything. I'd gone this way as the scenery was best though.

Loch Ness from around Dores: 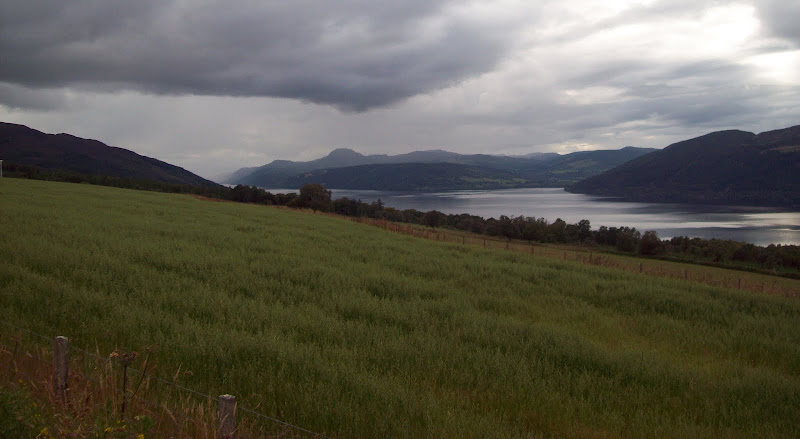 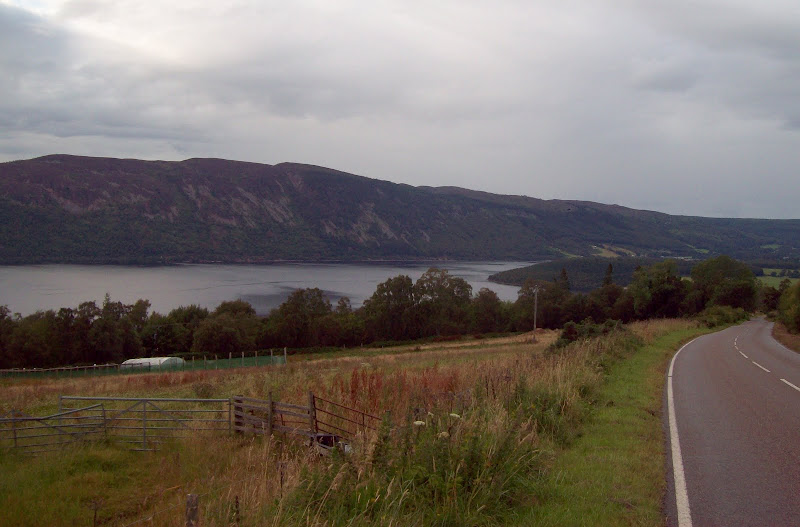 The climb out of Dores is pretty tedious too, although great views open out over Loch Ness. Once at the top, you are plunged into the strange hilly landscape which is typical of this area. It is full of exciting looking rocky hills and lochs, but all in minature. I pushed on between Tom Bailgeann and Creag nan Clag, two Marilyns that had given great evening ascents before, and then down to Torness, where a heavy shower came on. The minor road round past Abersky led me to the Dunmaglass Estate and the end of the tarmac. The rain had eased off by now. 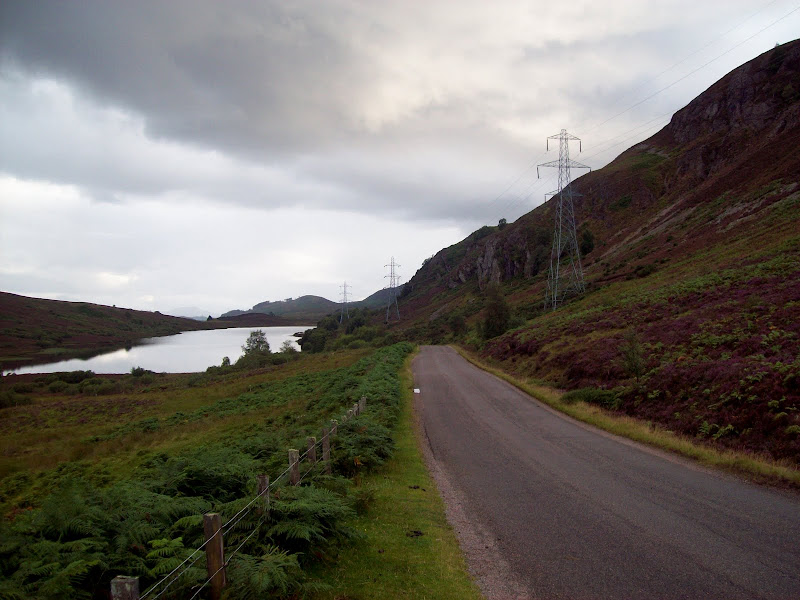 I've been down this way a couple of times before on the way to Carn na Saobhaide, and there's no doubt that whatever you think of the estate's attitude to windfarm development, it is an attractive place. After passing some keeper's cottages, the garden of the main lodge appeared on the right, and it was massive! Next the lodge, which was very pleasant in a country hotel kind of way, then something called 'The Folly' which had a large tower and viewing gallery. This is what you can see clearly on the ascent of Carn na Saobhaide, and I'd mistaken it for the actual lodge in the past.

walking_part.gpx Open full screen  NB: Walkhighlands is not responsible for the accuracy of gpx files in users posts
I abandoned my bike by Loch Conagleann at about 7:20, in an area that appeared to be used for grouse rearing (does this really happen? Stuff I've read previously suggests that barely anyone tries to rear grouse). Creag a'Chliabhain looked extremely impressive from hre - a sharp craggy summit. Passing through a gate and a hole in another fence, I was ascending next to the woods to the NE spur of Creag a'Chliabhain. This was hard going through deep heather and bracken. As I got higher, the bracken eased back, but the heather never really got any easier. I stuck to animal tracks where possible.

First views of Cread a Chliabhain: 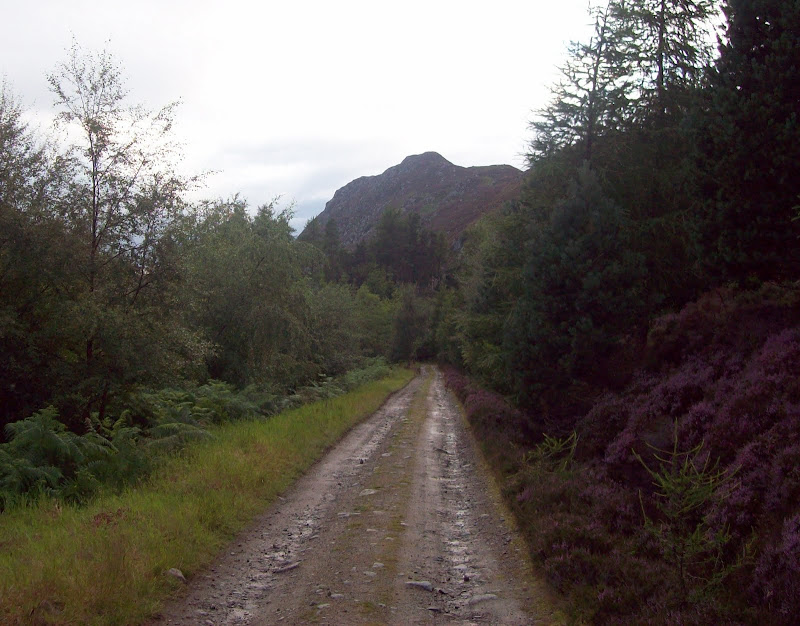 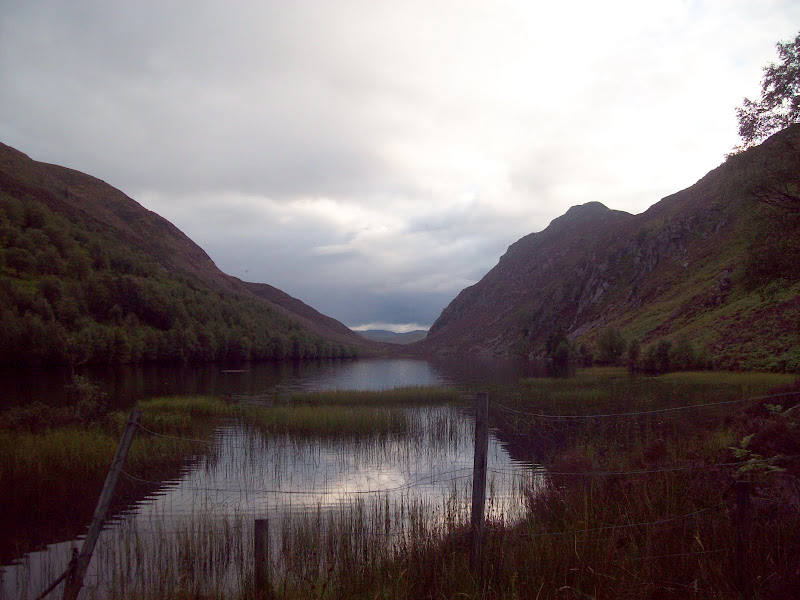 Views back down Conagleann and across to the slabby side of Beinn Dubhcharaidh were opening up, and were surprisingly rugged. I'd written off Beinn Dubhcharaidh by now, deciding it would be best left for a short winter's day maybe. I climbed steeply up what I thought was the summit cone, only to see the proper summit 500m further on. 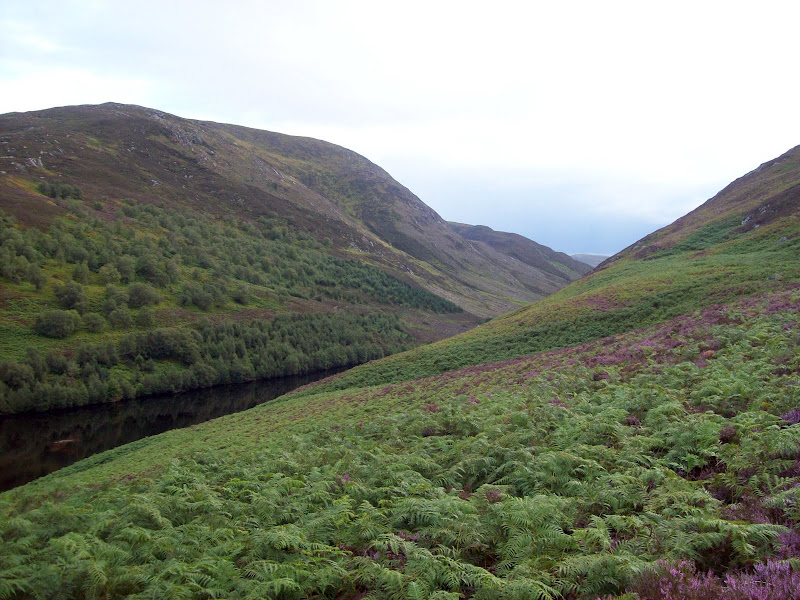 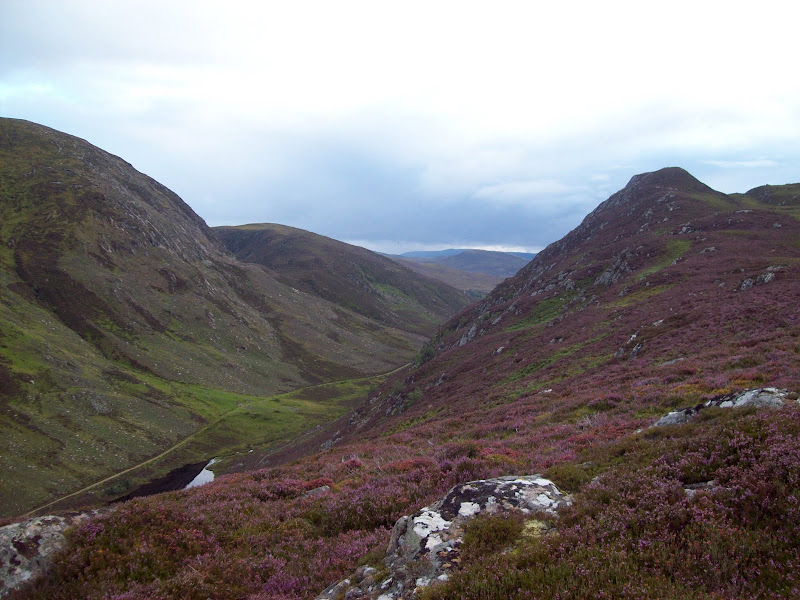 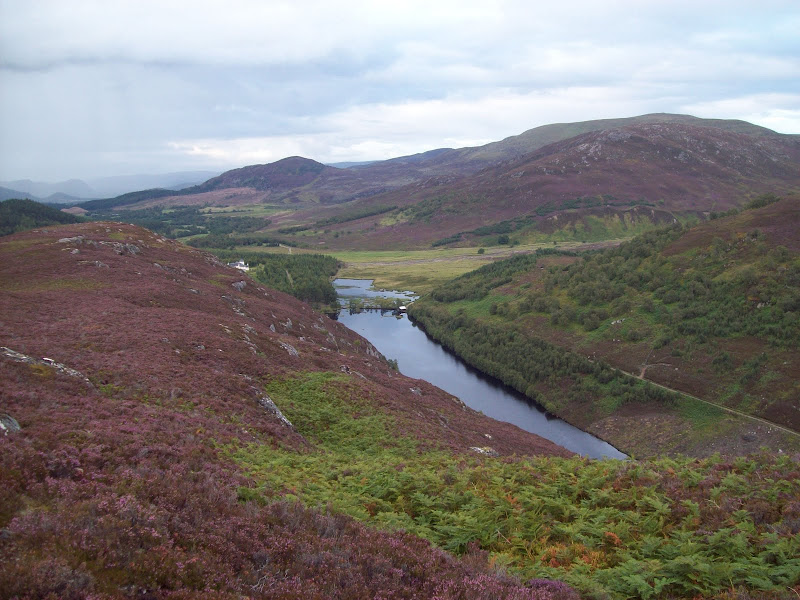 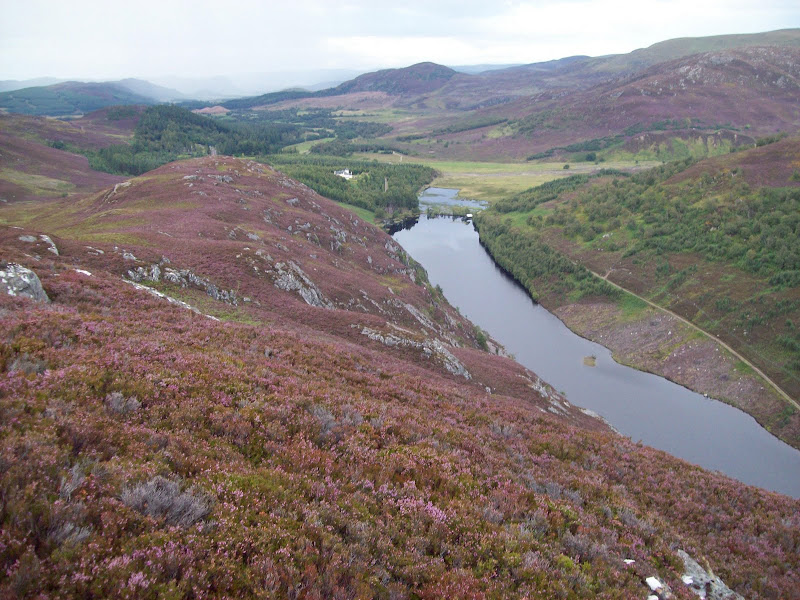 An Fhail, a deep cleft on the side of Beinn Dubhcharaidh: 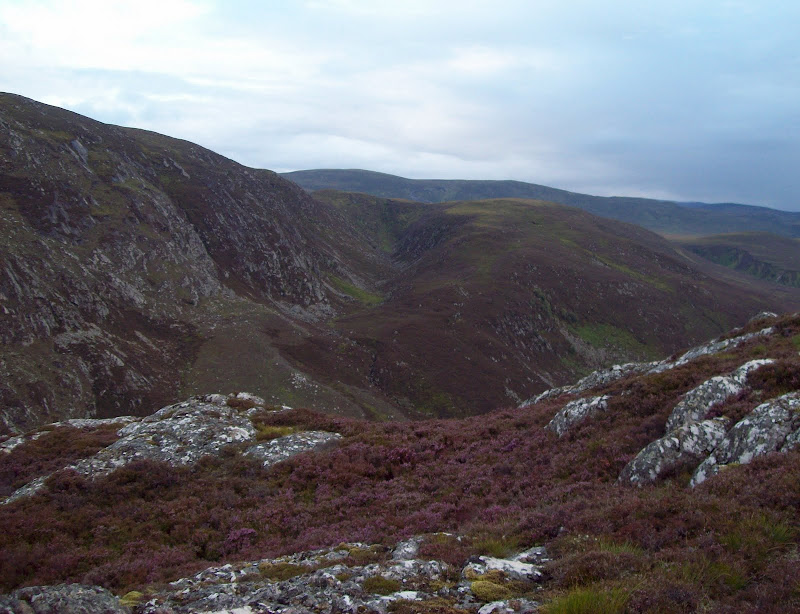 Despite the weather not playing ball in the way I'd hoped for, the view across Stratherrick and Loch Mhor was worth seeing, and looking north over Strathnairn back to Inverness was just as good. It was in fact much better than it appears in the photos. With the clegs and midges kept temporarily at bay by a slight breeze, I stopped for a few minutes.

West across Loch Mhor. Strathfarrar hills in the distance: 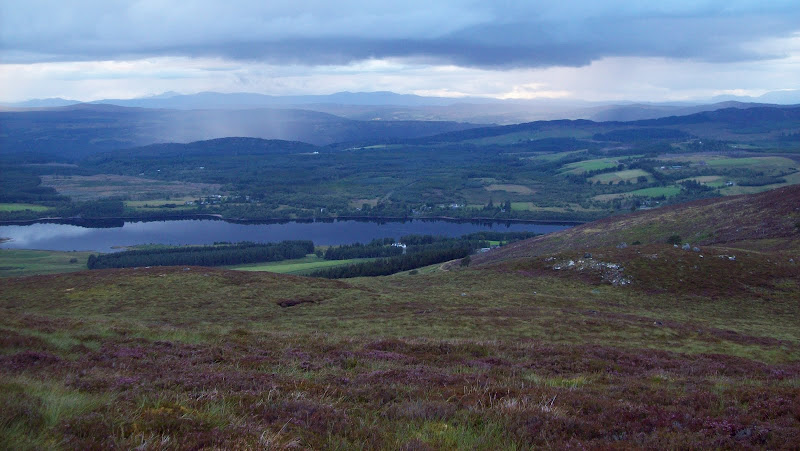 SW down Loch Mhor and across the Great Glen: 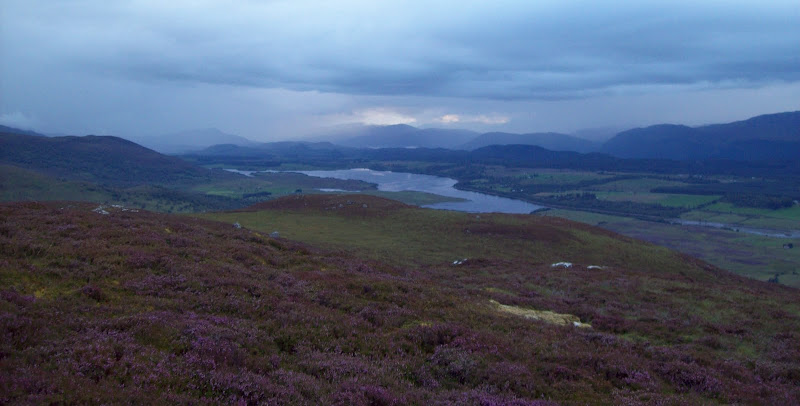 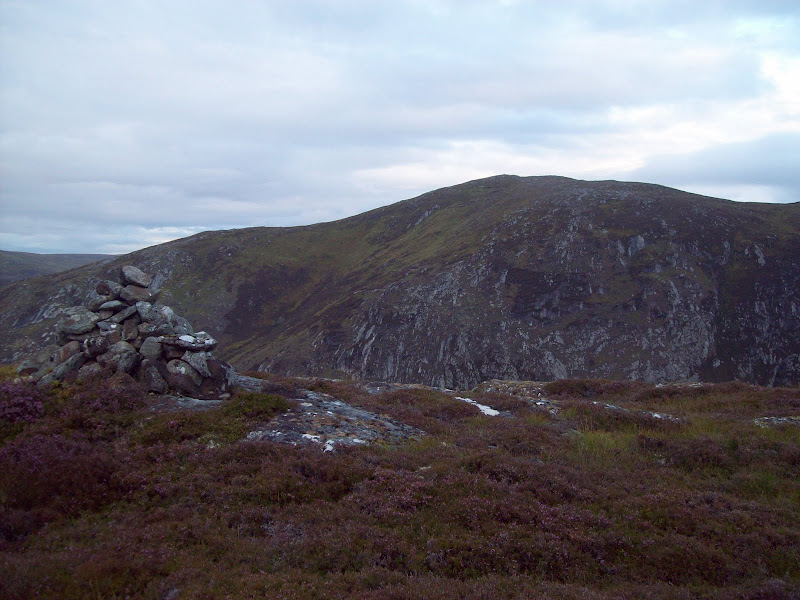 Somewhere up there is the ultra-retiring Corbett of Carn na Saobhaidhe: 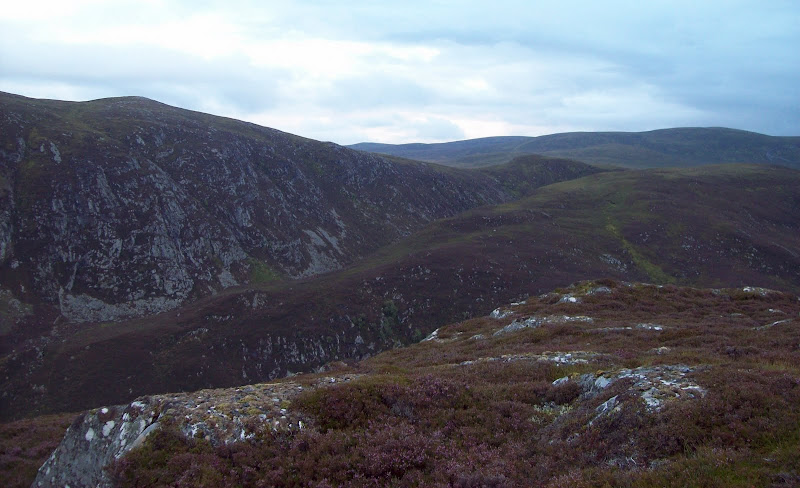 The descent was entertaining to say the least. A friend had warned me that the SE face of this hill was extremely tough going, but I'd seen this as more of a challenge! Intially easy going over more heather, I was suddenly weaving my way down between some huge cliffs, the way forward unclear. I worked my way rightwards, sticking to terraces of heather, and eventually found a break of sorts where the going wasn't quite vertical. It was rather like my descent of the south face of Bidean a Chabhair in Knoydart, but again in minature. A fun twist to the route.

Looking back up the descent route. Hard to say which way I ended up going: 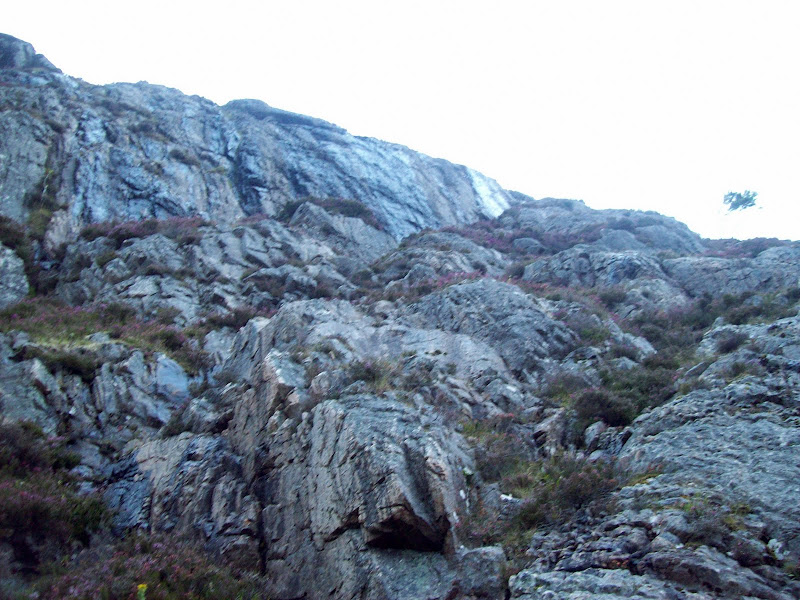 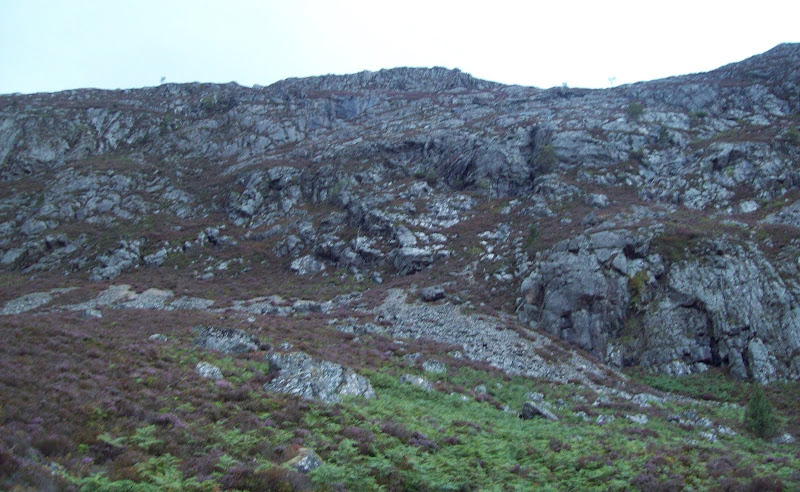 That fun over with, all that was required was to climb over a deer fence and get back along the path down Conagleann. A nice end to the walk, and an impressive corner of the Monadhliath, even if the daylight was on its way out. 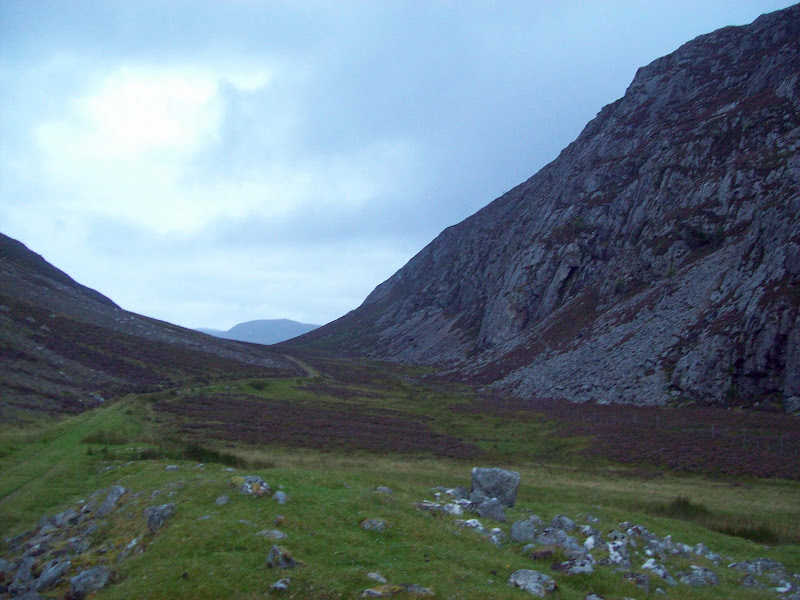 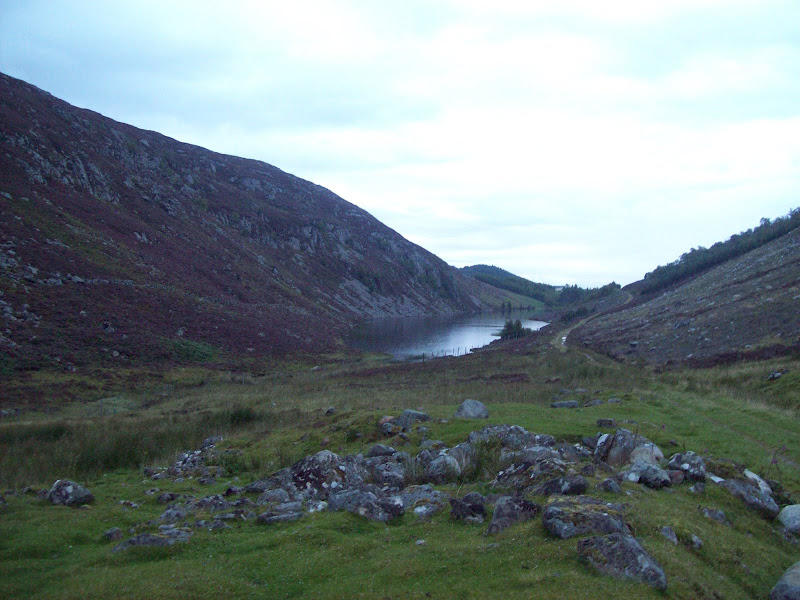 Last look at Creag a Chliabhain: 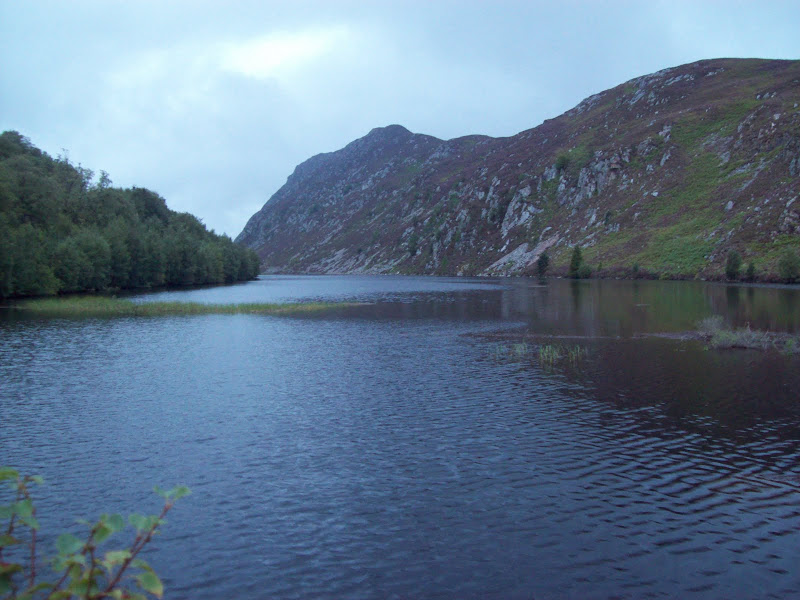 Approaching the bike from the other direction, I realised I was in a private area, and the estate had provided a diversion path to the SE of the lodge. I hadn't seen any signs on the way in, but decided to use the diversion anyway. A nice walk, but it was rough for cycling and involved a little bit of pushing. No matter, I was soon back on the estate track (where I didn't see any 'private' notices, but the diversion was signposted from this direction too).

Almost back at the public road, it was now after 9pm and almost dark. A land rover pulled up next to me, and I had a quick chat with one of the estate workers, who seemed to have a number of things going through his mind: a) glad I wasn't poaching, b) politely interested in what I was doing and c) wondering why on earth anyone would want to do anything like that. There tends to be a big divide between gamekeepers and hillwalkers, but these days most of them have got used to the sight of people with poles, gaiters and mapcases hanging on a bit of string. I think I confused him further by not looking like that (ie on a bike, wearing t-shirt, shorts and running trainers).

Luckily I'd remembered my lights. Although a drizzle came back on at times, I rather enjoyed my cycle home. The roads were almost dead, and what little breeze there was was behind me, allowing me to make good time down Strathnairn. The only odd thing that happened was a vehicle that came up behind me as I passed through Farr, slowed down, then the passenger wound down his window and took a photo of me! I think it was the same estate workers I spoke to earlier, but I couldn't be sure. I could just imagine him showing it to his shooting buddies the next day and saying 'hey, look at this weirdo I saw yesterday!'

Despite leaving out Beinn Dubhcharaidh, I was still about 40 minutes later than expected getting home, and I finally rolled in at 10:45, pretty knackered and ready for tea. If there's one conclusion I can draw from this fun little trip, it is that the nights are definitely drawing in!

Jeezo malky thats a long way for a sub2000 after work,nice report anyway.

Good stuff Malky. An epic route! Not something I'd repeat- especially as I've now sold my bikes, but I do keep meaning to check out that side of Loch Ness and this inspires me. Like you've suggested, I'd probably leave it 'til winter- heather bashing with midges and the rest doesn't suit me especially since I'm lazy and stop often. That pair of hills on a crisp winter day would be good

Had to laugh at the guy taking a pic WTF?